Has Prada Backed Itself into a Saffiano-Covered Corner? 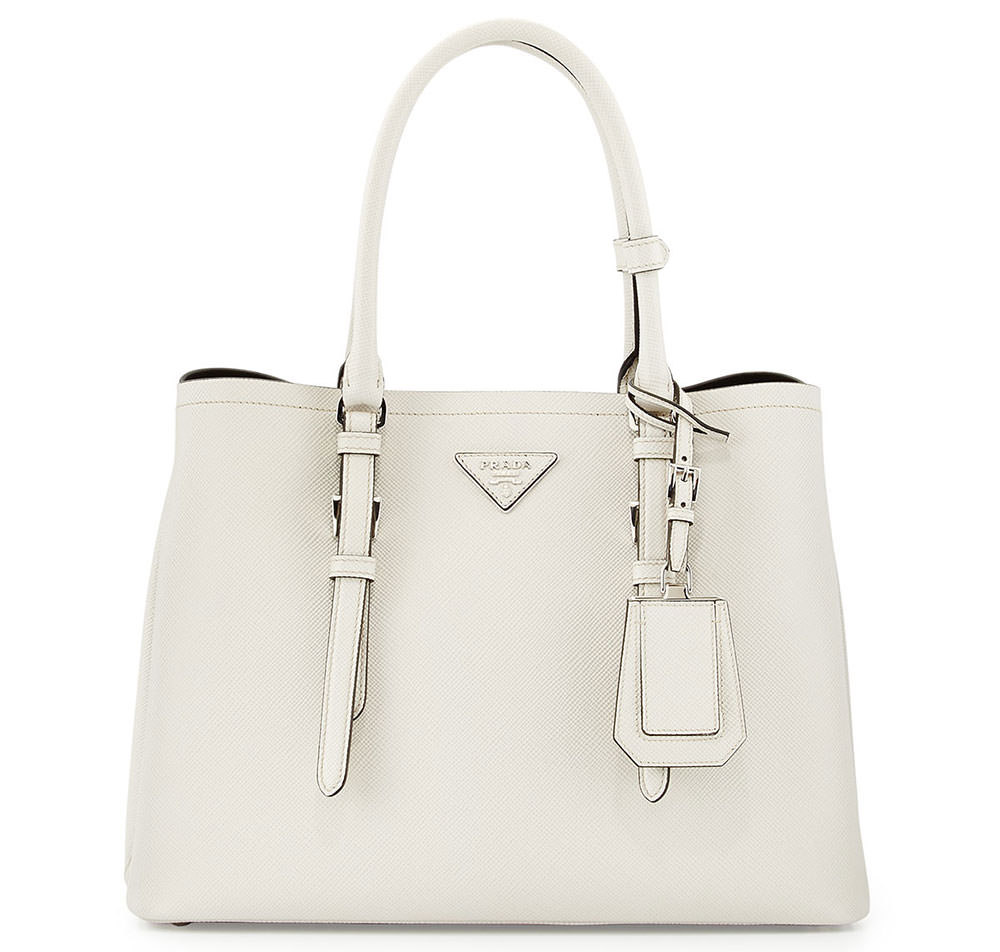 Last week, I spoke with Chavie Lieber of Racked about Prada’s current profit woes, much of which are tied to the recent underperformance of the leather goods that make up roughly 40% of Prada’s business. Lieber also talked to PB contributor Pattie Rechtman, luxury shoppers and industry analysts, and we all more or less agreed: Prada needs to do something about its handbag offerings. In my mind, that means looking beyond its saffiano totes and finding new ways to entice accessories buyers.

Prada’s saffiano bags aren’t bad. In fact, there’s a good chance that they’ll eventually take a spot in handbag history, and they’re a perfect at-work option for women who need a conservative bag that looks tailored and professional. Instead, Prada’s saffiano bags are a problem because there are simply too many of them; the Saffiano Luxe, Executive and Gardener totes look virtually identical, and all three come in multiple sizes and a rainbow of solid colors. The designs have remained virtually unchanged in the years since they debuted.

In the past year, Prada has introduced several lines of beautiful, open-top, soft-sided saffiano totes, but the problem is the same: there’s relatively little differentiation between the lines except for small differences in handle attachment and interior organization. Unless you have strong feelings about sewn-on handles versus buckles, there’s not much in the way of meaningful variety or novelty beyond color, and variety and novelty are the name of the game in handbags right now. Prada simply doesn’t have any answer for Fendi’s forward-thinking fun or Chanel’s zeitgeist-y themes.

For all of saffiano’s functionality and durability, it doesn’t feel like a luxury material when you touch it. Prada is in the position to use any materials and dazzling construction methods it wants because of its vast resources and brand recognition, and it would likely find success with expanded offerings in both exotics and high-end soft leathers. “Variety” needs to be something more than dozens of colors of saffiano leather in order to motivate luxury customers, whose options are plentiful and always changing.

Even when Prada does hit on something that feels full of modernity and urgency, like the wonderful Spring 2014 painted face bags, the brand does little to capitalize on the momentum. Once the initial offerings of those few designs had sold through, they were not replenished, and the line wasn’t continued into the next season in any meaningful way. Other brands are better at taking something that strikes a nerve and building it out into a full-fledged success that can last multiple seasons (which is, not coincidentally, usually how long it takes a successful brand to hit on another big thing). Prada generally chooses to go in an entirely new direction. Often, the momentum is lost.

As Lieber mentions in her article, Prada would also do well to reign in its availability. Like it or not, most luxury customers are motivated by scarcity, and Prada’s bags are everywhere. That’s in sharp contrast to the brand’s clothes, which are, by all indications, as successful as ever. They’re only available in Prada boutiques, and although ending wholesale in its entirety would be a severe move, pruning the department store availability back and offering an improved, more luxurious, more forward-thinking line of bags is the most likely road to success for Prada in the future.

The saffiano bags won’t be going anywhere, and they shouldn’t. But Prada has the ability to do so much more, and here’s hoping that Miuccia flexes her considerable creative muscles soon.

This article is spot on! I’ve been thinking the exact same thing about Prada for at the very least, two years! I try to buy at least one new bag every year and I find that when that time comes and I’m wandering through Selfridges or wherever, I breeze right past Prada and even with a frown (like theres nothing here), and with a quick glance into the store, I am always right. Prada is going through a long lull with their bags. With the Saffiano specifically, like the article says, there are just too many of their bags in that material and it’s not a luxurious feeling material at all. I have two Prada bags, I love one, which is a nice calf leather but I’m looking to sell the other one, which is Saffiano, I’m so over it!

ohh same here! and looking for sale my Saffiano too , my hubby said “it feels like plastic”

actually prada already stopped supplying a lot of stores some years ago.

all i hear from their customers is that the quality of the bags doesnt hold up in comparison to chanel louis or hermes. a lot of them used to opt for prada because it was cheaper than other brands but since they raised prices but kept quality low people stopped buying

thats not true
i have chanel and i think Chanel is worse than Prada. esp the caviar material classic flap.

Well it is true in that customers keep telling me that. I don’t own either so…..Nontheless I’m sorry to hear that your Chanel is not holding up though

Prada bags are so borrring.They have been this way season after season. I’ve kind of given up on anticipating a covetable Prada bag anymore. REad that Racked article too!

I am NOT a fan of Saffiano leather. I agree with the article. It does not feel luxurious to me at all. I much prefer a heavier bag. I like calf or pebbled leather.
To me, I will put my money elsewhere when looking for a high end bag.

i have quite a few designer bags such as Gucci, Louis vuitton, Goyard, Chloe, Jimmy choo etc. I bought my first Prada about a year ago. Unfortunately the Prada looks worn after only a few uses. My other bags have held up well, so I will be going back to those brands.

I would not but I have to agree with this article. Prada “invented” saffiano, it was a great discover for me, in terms of weight for the women (I never buy a bag if it’s heavy—> and I have “tried” last Givenchy, last Saint Laurent they all are wonderful bags, Celine – that I love! but my God heavy as hell. All these bags are good for a wonderful shelf in your house, bags to admire) and let me say, everybody copied saffiano (I myself recently bought a saffiano “daily”bag by Tory Burch here in Milan, Italy- the small york). This said I must admit that I also thought the brand need fresh air in their creation (and Gucci too) because is stuck on classic. Even the new leather bags I found very boring. I trust Miuccia 100% because she can do that, she can be that innovative woman, the problem is to return being really exclusive following the example of LV (never a discount luxury is luxury), Goyard (extreme?) or Hermes, which are very true to their brand. Hope all the best to Prada because I love this brand 🙂

It’s interesting that the creativity in the clothing line isn’t reflected in the brand’s leather goods. There’s always so much buzz about the runway shows (heck, even the setting of the runway shows are big deal), and there’s always an “IT” item to come out of them, whether it be a coat or a shoe. But it’s never a handbag. The rare exception was the painted face bags, of course.

I’ve been thinking of purchasing a prada saffiano but this article totally bursted my bubble. I really want a small bag under 10 inches that I can use as a tote and can be worn cross body. I’m considered the celine nano but Im not sure if it’ll still be in style years to come. I’d like to keep the bag under 6k. Do any of you have any suggestions? I currently have 3 chanel bags. I’m open to other designers

0
Reply
The Skinny On Manhattan

Very true. I was in the market for a treat/splurge last Fall and the first line I looked at was Prada. First thing I thought about the whole line – BORING. Only the colors were lovely. But the saffiano doesn’t feel like anything special, the zippers are sticky and sharp when the bag is open and the bags are insanely heavy. And that’s besides the fact that everybody’s Prada bag looks same old, same old because it’s just one basic design. At this price point, the leather, construction and design should make you swoon – not yawn!

Agree, article was spot on.. but there is something to be said about Prada and other brand’s lack of innovation in handbags/leather goods: the seasonality doesn’t show through as, say, more forward/abstract collections, which may appeal to customers who are interested in investing in products that have “lasting” value as much as they do “staying” value.