Should We Mix Different Brand Logos In One Outfit?

I think I see the Times Square billboards on the horizon…wait. That isn’t Times Square! It’s a person flashing 10 different logomania pieces in one look. Pants that read KENZO down the legs, a Gucci belt in GG Supreme canvas, Balenciaga’s logo scarf, a Chanel Classic Flap, Fendi FF sneakers, a Louis Vuitton Monogram sweater, Dior’s Oblique jacket, a Prada bucket hat, Valentino V-Logo sunglasses, oh, and the Rimowa has a Supreme logo on it too.

When so many loud logos are mixed together in one look, they all scream for attention. It is similar to clashing a kaleidoscope of bright neon colors together, all in one outfit. If this were food, the explosive flavors competing for attention would create an unpalatable experience!

Some people think any big logo is tacky. Some even say that they would never wear something that advertises a brand. I love logos, and I think a nice touch of logos within an outfit can be very chic. I blame this on Instagram, where I have grown to appreciate some level of flashiness. Instagram was also why I grew a distaste for clashing several different brand logos in one look. I saw some people sporting items from luxury brands like Louis Vuitton, Dior, and Gucci with their most overtly-branded items in one outfit, and I’ve grown an aversion to clashing brand logos. I want just one visible brand in my looks. Just one. I think the extremism sent me to the other extreme!

This doesn’t mean that everything in my look is from one brand. It just means that the pieces with logos are all from the same brand. I wasn’t always like this. I used to wear my Hermès H belt with Louis Vuitton drivers and my Fendi Peekaboo. Maybe even with a Dior logo necklace, but I just can’t do that anymore.

When people mix several loud logos from different brands in one outfit, I think the message they are going for is “Look! I’m so trendy!” but what I get is, “Look! I love brand names!” Once again, I also love brand names. I’m not pretending that I don’t. I don’t mind flashy either. I just mind clashing so many loud brands altogether. Wearing head-to-toe Dior, which I love, screams, “Dior addict.” While wearing multiple flashy brands can scream “label addict.” They don’t have the same ring, do they?

One of our PurseForum members recently snapped a photo of someone at Nammos in Dubai. The person wore a Dior Oblique ensemble with a Louis Vuitton Monogram bag. If only the bag was Dior or did not have any monogram at all, then the outfit would look perfect, in my opinion.

There are also varying degrees of brand mixing that can be tasteful. I’ve seen a Gucci GG belt with a Dior Saddle. It can work since the hardware is often complementary in shape and color. However, I still prefer a Dior belt with a Dior bag and a Gucci belt with a Gucci bag. Hopefully, the shoes aren’t from a third brand with a prominent logo. It starts veering into clashing territory when the Saddle has the Oblique logos, and the Gucci belt has the GG print in addition to the logo hardware.

Avoid Over-Spending With These Tricks

While I love dressing head-to-toe in one brand, the cost of putting together such an outfit can be very high. Most people don’t stick to only one brand and have pieces from several different brands that they want to coordinate to put their outfits together.

The trick to avoiding overspending is to pair branded items with items that have no overtly-visible branding. For instance, a Gucci bag can be paired with a logo-free outfit, from budget-friendly brands like Uniqlo to high-end brands like Brunello Cucinelli. This way, the visible branding of one accessory doesn’t clash with any other logo in the outfit. It also makes the brand logo stand out on its own.

Brands have been promoting the idea of mixing their logos in recent years. Gucci and Balenciaga have products with co-branding with the Hacker Collection while Fendi and Versace have the Fendace collection. Louis Vuitton and Supreme did their thing together too, and so have Dior and Jordan, among several others. More than one brand was visible on the merchandise in all of these cases. Surprisingly, I actually don’t mind those. In fact, I think that those pieces cleverly allow people to mix other pieces from those brands in their outfits. 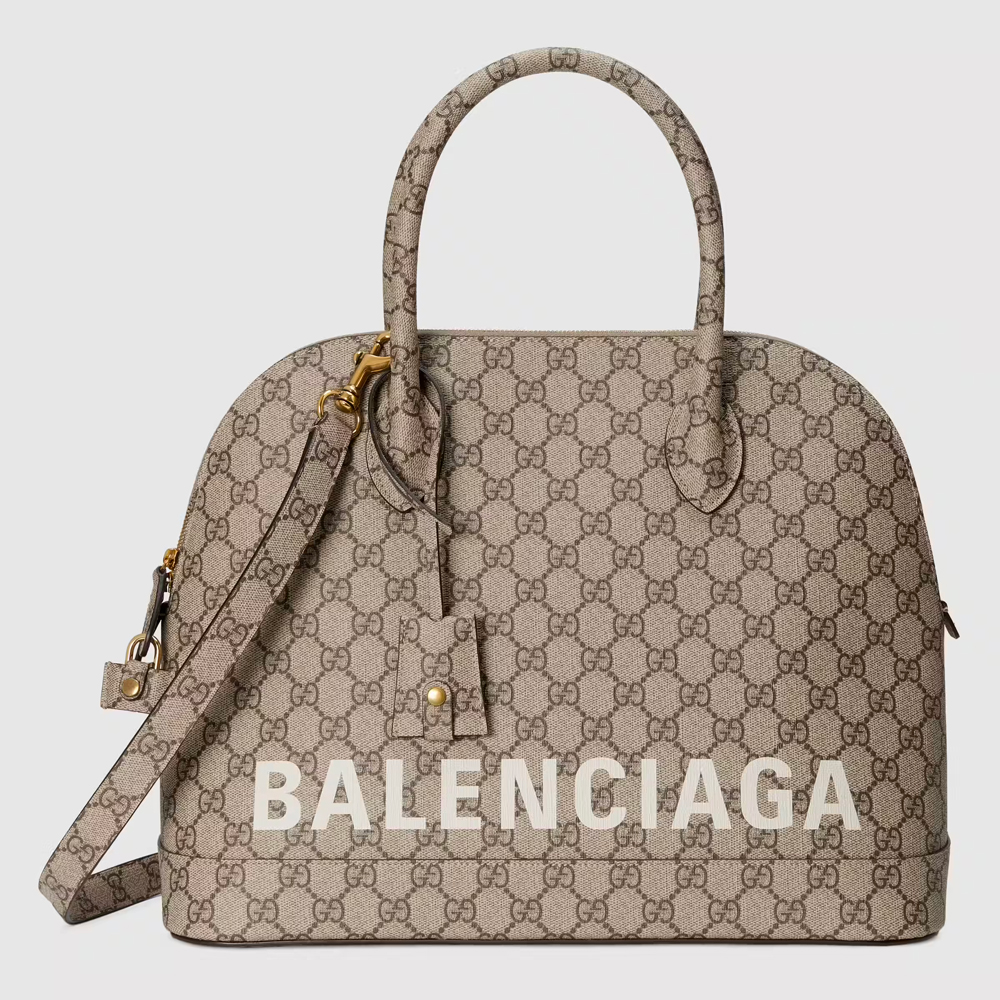 Maybe Coco Chanel should have said, “Before you leave the house, look in the mirror and take one brand off.”

People can do whatever they want, whatever makes them feel good. But personally, I avoid logos on clothes, belts, shoes, etc. I think logos draw the wrong kind of attention and I’ve never seen anyone wearing a bunch of logos looking elegant or sophisticated.

I’m not interested in spending thousands of dollars to be a walking billboard for any brand. I stay away from brands that do this for ex: BALENCIAGA.

Each to their own, I personally love Balenciaga! I wear different designers all the time but would not wear more than one item with a blatant logo at a time.

It looks cheap and tacky to pile on all the logos at once.

I prefer to show very little logo if possible. Euthanize me the day I show off “look at me” big logos all over. Doesn’t even matter if it is just one brand e.g. all Chanels and not clashing. However, I don’t tell others what to do. If I don’t like what I see, I simply look away. Therefore, there is no “should” from me about logo-clashing. Want to be wallpapered in CC’s FF’s GG’s all at once? Knock yourself out!

Eh. I don’t even notice when I’m getting dressed. I wear what I want for the day and keep it moving. I probably should, but I’m not interested in the opinions of strangers. Besides, it would cost me an absolute FORTUNE to dress in one label for one outfit. The only time I dress in head-to-toe labels is when I wear Adidas or Puma. I don’t like to mix athletic brands. Anything else is fair game.

I don’t like head to toe brand logos. Whenever I see it I think it’s obnoxious and kinda funny 😆 . I just don’t like logo intense clothing period. I have always viewed designer goods with a heavy emphasis on a brand logo as an accent piece. I personally would not want a shirt, dress, blazer, sweater or pants with Gucci or LV logos all over it but I would and do wear classic logo intense bags and less logo obvious shoes or the reverse of that. I would be comfortable mixing designer logos in my accent scenario as well as long as the logo was super obvious in only one place. Belts are another story … don’t like the brand buckles at all and would not purchase. I also don’t like pieces with obnoxiously large logos. To me that Gucci bag above is ruined by that balenciaga logo … I guess there is humor to be found there but it won’t be at my expense. It reminds me of branding you see on appliances which I can’t stand.