Are Bucket Bags In Style?

The silhouette that keeps on giving…
23 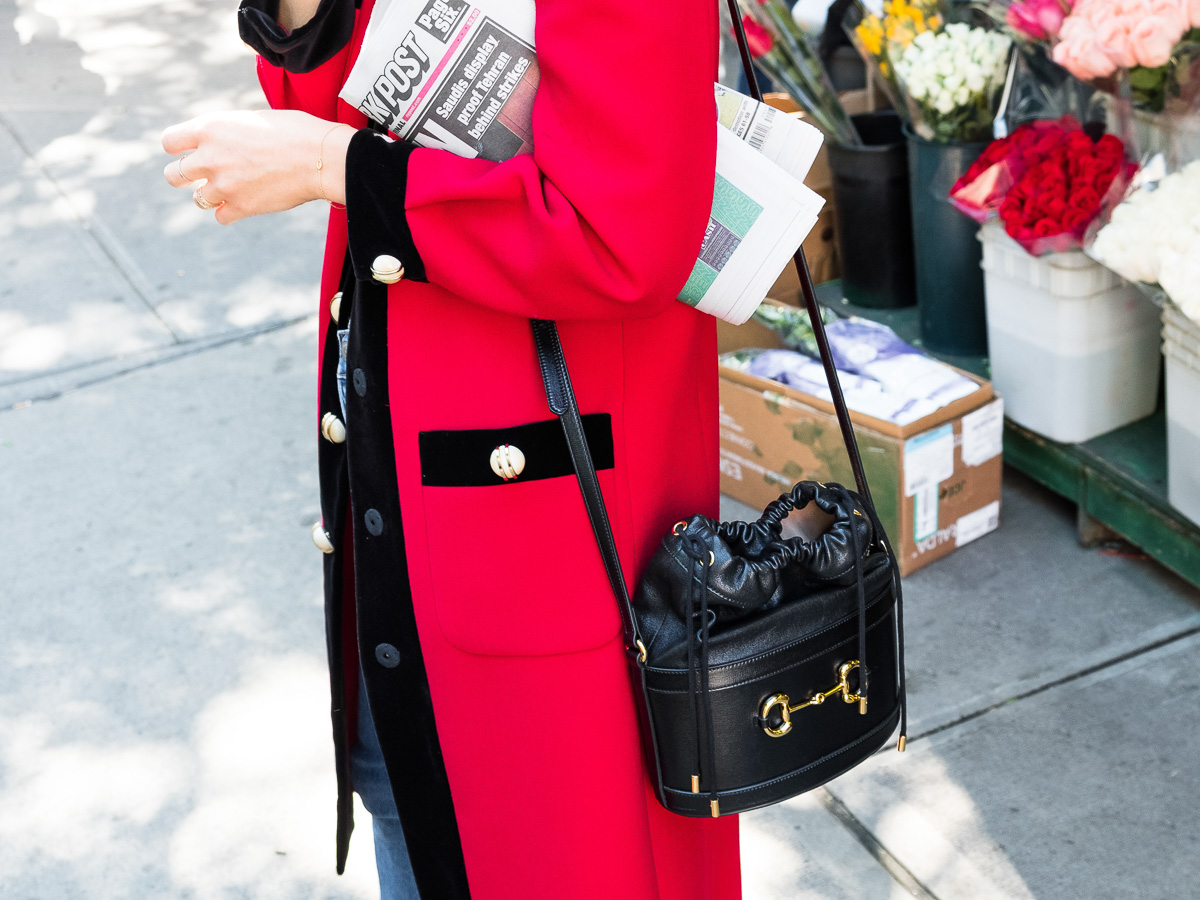 In today’s saturated handbag market, could it be possible that we may have just seen all there is to see? I mean, monograms and sequins are having their moment; studs, shearling, and fringes pop up periodically, and pretty much every sort of embellishment imaginable has been featured on a purse at some point or another (an overwhelming majority of them on the Fendi Baguette alone!)

Plus, when was the last time we saw a truly “new” purse shape? The Loewe Puzzle? The Louis Vuitton Airplane? Or the BV Whirl? Aren’t they all just spin-offs of silhouettes that have been in existence for much longer?

Just because we imagined that there couldn’t possibly be anything left to create, however, doesn’t mean that fashion houses wouldn’t keep churning out designs, and some very hit ones at that, season after season, and even in-between seasons.

Okay, maybe the actual scenario isn’t as dramatic as it sounds (or is it?). But one certainly can’t deny that there is a staggering number of options available right now. I mean, when you’ve decided to purchase a new purse, do you opt for a mini, a maxi, or something in between? A neutral or a pop of color, which do you choose? Is there a particular brand that you go for? Do you fancy embellishments or clean, minimalist designs with subtle nuances?

No wonder one must engage in extensive research to ensure that they can derive maximum usage and satisfaction from their purchase. And it’s bound to frustrate beginners and the most seasoned buyers alike.

During such times, it feels like a relief – nay, pure joy – to be able to get back to the basics, i.e. to stumble upon a silhouette uncluttered by bells and whistles. And that, arguably, is what happened when Mansur Gavriel’s now cult-like Bucket Bag first launched.

The brand was born from the creative genius of the designer duo, Rachel Mansur and Floriana Gavriel, who met at a concert in 2010 and launched their first line of handbags in 2012. After the maximalism and bling of the 2000s and the subsequent economic collapse, they felt that the world needed a simplistic line of affordable luxuries, or as they described it, a more feminine version of Want les Essentiels de la Vie without having to commit to the cost of a Céline.

Using Italian leather and a specialized Italian technique where two pieces of different-colored leather are fused together to achieve a purse with a leather lining in a separate shade. And in 2013, having earned the respect of fashion designer Steven Alan, the brand quickly became the must-have among editors, influencers, and retailers – their impeccable quality and attractive price tags making them hard to beat! And while now their brand features everything from shoes to ready-to-wear, as well as a handbag répertoire featuring a popular tote and the delicious-looking Candy Bag, the Bucket, and soon after, the Mini Bucket remains the brand’s most popular offerings.

However, bucket bags aren’t something new. In the crowded market of handbags, the bucket remains one of the oldest silhouettes in fashion. But while hunter-gatherers in history have been using pouches not entirely unlike this shape, the first real bucket continues to be coveted today – the Louis Vuitton Noe! Created in 1932, most fans are already aware that the Noe was a special order to Gaston Louis Vuitton, originally designed to sturdily carry 5 bottles of Champagne – four upright with the fifth upside down in the center. Meanwhile, collapsible bucket-style bags were also used by soldiers in WWII to transport water and tools. However, the bucket bag as a fashion accessory was first conceived by Hermès in the 50s, quickly followed by Coach’s heritage Bonnie Cashin edition and Chanel’s unique “square bucket.”

But does the bucket silhouette possess the staying power to become a wardrobe classic?
Well, its aesthetics are hard to parallel. Get it in nude leather, as was popular in the 80s and 90s, and you have a purse that can be carried anywhere and everywhere. On the other hand, a classic black or tan won’t show as much wear and still be as versatile. Plus, the bucket’s flowing tresses provide a superb canvas for brands to showcase designs – whether it be monograms like the Noe, colorful prints like the Loewe Paula’s Ibiza Balloon Bag, Chanel’s quilted version accessorized with chains in place of the drawstrings, or this Gucci Equestrian number with… a helmet attached to its bottom? Honestly, this one’s got me a little puzzled. 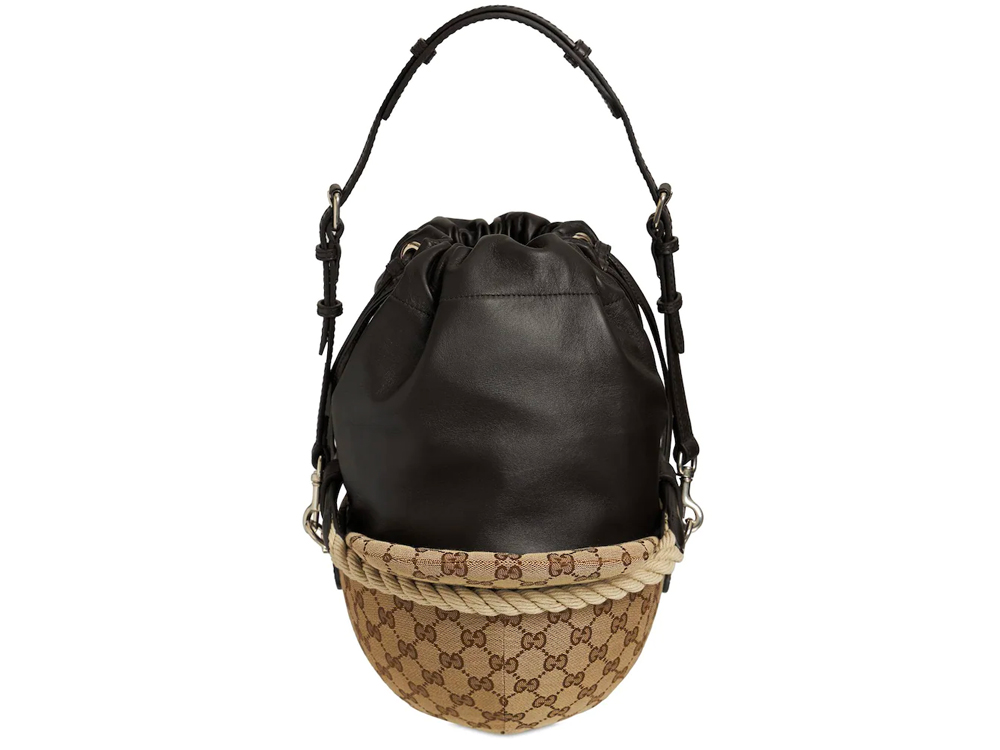 From a functional perspective, though, purse-lovers are somewhat divided on their opinions about the bucket bag. Having the grab-and-go convenience of a tote, but largely secured by the drawstring, it’s spacious, can be mostly carried crossbody, and comes in all sizes from micro to ridiculously large.

On the other hand, the bucket might also become what is known as a “black hole,” i.e., a space where all your belongings get lost and leave you scrambling for your keys every time you reach inside.

However, these usability glitches are mostly mitigated when a light-colored lining is used – like Mansur Gavriel’s Cammello/Rosa pairing. That, however, is largely a matter of personal preference, and ever since the unprecedented popularity of Mansur Gavriel’s bucket, a version is available in nearly every material, color combination, and price point imaginable.

In fact, the sheer number of available options alone signals the bucket bag’s everlasting popularity – there is literally one for everybody! And the return of the bucket in the mid-2010s, which, in all honesty, shows no sign of slowing down till date, foreshadowed the frenzy for Daniel Lee’s creations at Bottega Veneta – designs where the leather, and not any element of excess, serve as the primary attraction of the purse. Thankfully, we’re currently in an era when everything is welcome – the maximalists have offerings to their liking, and so do minimalist fashionistas. And the bucket, with its ability to seamlessly transition on both sides, makes the perfect companion for the modern purse-lover.

I find many of them attractive, but they’re just not that functional to me since they can’t lay flat against your body when worn crossbody or on the shoulder. It seems awkward to me,

I see, having a rounded, flat base is actually one of the defining characteristics of the bucket so I can imagine why it might not be a favored aesthetic for you.

I’m team bucket bag all the way! I love the Prada nylon small bucket bag, the Polene nuit, and the mark cross small Murphy (which is a bit of a mix of hobo/bucket bag)

Love bucket bags! The drawstrings don’t bother me. My Coach & LV bucket bags have a center divider, making it easier to find my things.

Oh wow, those are indeed hard to come by and a dream for those of us hoping for more functionality.

I have my eye on a vintage bucket bag; I am smitten!

Yay! Best of luck, hope you get your hands on it!

They are just so outdated and nonfunctional

Drawstrings are big no for me. It is too much of a hassle. You cant open or close the bag with one hand. I guess the only bucket style i like is the hermes picotin.

Well actually Tod’s, Tory Burch and a few other brands have buckets that come with magnetic closures, which should theoretically be easier to get in and out of.

I don’t really care for bucket bags, but I do own two that I like-the Coach Willow in size small and Elizabeth & James Cynnie. Both have structure which I like.

The great thing about buckets is literally their sheer variety – there are structured and soft ones, drawstring and magnetic ones, organised vs wide open ones.. the list goes on. Glad you like both of yours!

I have a medium mansur gavriel bucket bag, which I LOVED for a time, but one thing that bugs me about it is it’s only meant to be worn with the biggest, roundest part bumping against your hip, which is just bulky and awkward. I am 5’5 which is a very average size in this country, but maybe this bag is meant for women who are closer to 5’10, and therefore the bag would hit closer to their natural waist, and then feel less awkward or bulky? On the other hand, I have an old Alice + Olivia bucket bag that’s about the same size as my mansur gavriel and it is a shoulder bag and I love it, for some reason it tucks perfectly right behind my arm and doesnt feel bulky there are all (it’s slightly “softer” than the MG). It’s one of my favorite bags for convenience.

That really solves the “not laying flat against your body problem” – designers take notes! And I’m glad you’ve found a bucket to your liking!

I hate em. Always have…always will! Too much fussing about with pulls and straps and finding stuff. Just plain bothersome and awkward to wear…🤷🏻‍♀️

I can imagine, although yeah you can find magnetic ones with organized interiors, like the Prada Panier.

I love bucket bags but find that many are either too big or too small for my everyday work needs. But I love them for casual wear outside work. I am not troubled by them bouncing off my hip, and I am fine with the drawstring tops. For me, they are a bit of a throwback to the 1960s/70s (showing my age).

Indeed, they are very nostalgic. Hope you find a size that you love!

I have a MCM brown bucket that I love I use it regularly. I find it funtional and suits my needs when I go casual.

Congratulations! Is it the monogram version?