Is the Loewe Puzzle Bag for Men?

Men, fear not! I’m putting the pieces together.
59 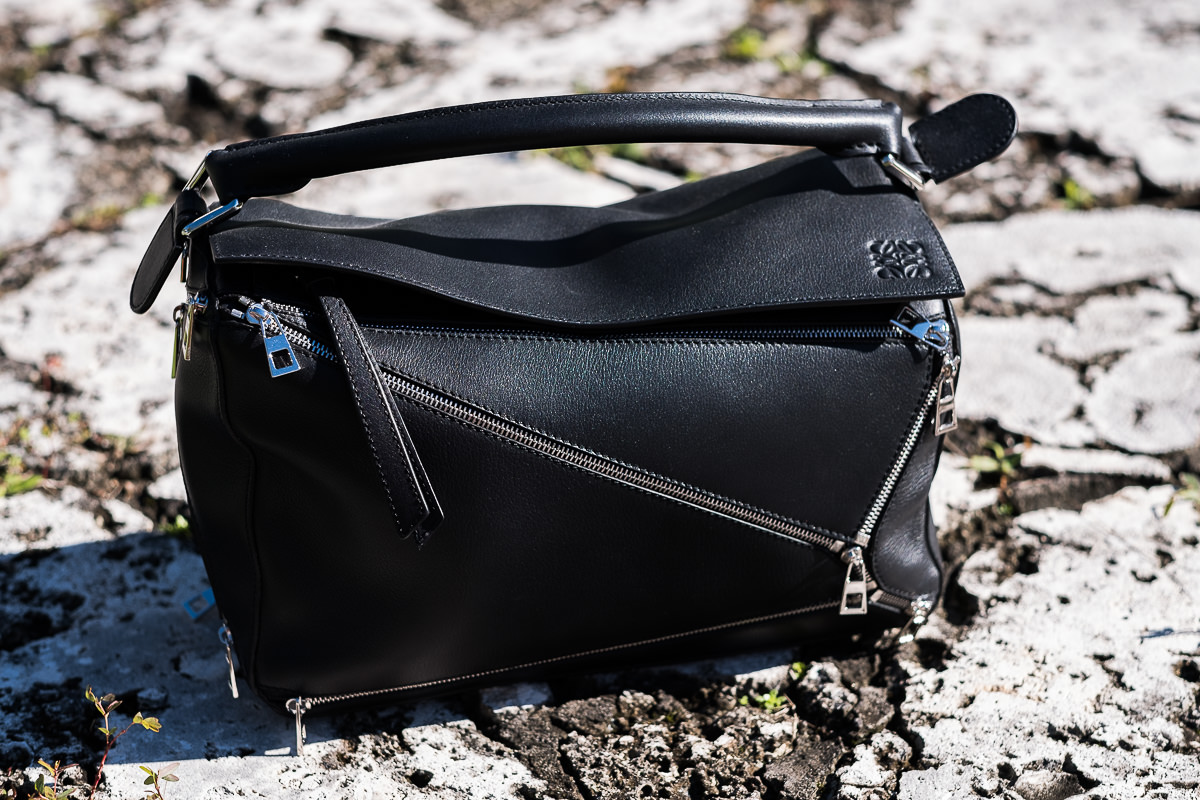 By now I’m probably running the risk of being that guy who’s always trying to sell women’s bags to unsuspecting male readers. First the Sac de Jour, then the Antigona Soft and now the Loewe Puzzle Bag? Unpardonable! However in my defense, JW Anderson seems to think the same, so take that, fashion police!

Most man-bags of the present day (I didn’t exist in the past, so I can’t attest to those) seem to have almost architectural characteristic about them. Whether it’s Tom Ford or Burberry’s backpacks, Louis Vuitton’s countless range of Monogram Eclipse or Damier cobalt briefcases and Keepalls, or the assorted range of belt-bags from Prada, Fendi and Dior, architectural lines are what seem to define the masculinity of bags. This can also be seen on Givenchy’s classic Antigona or Balenciaga’s Bazaar. So it shouldn’t really come as a surprise that the Loewe Puzzle Bag, with a design that literally looks like a snazzy blueprint out of the pages of Architectural Digest, was originally made for men.

In fact, if there was ever an award for the quirkiest but still usable (and by “usable” I mean NOT Thom Browne’s Bunnies or Doggies) bag of the year (and probably for many more years to come), it would definitely go to the Loewe Puzzle Bag. I’m rather puzzled why it’s called the Puzzle in the first place though (see what I did there?) and not the Sliced or Cubed bag. Perhaps those sound more like something out of a casserole cookbook than a luxury fashion house. But of course, we have seen stranger things.

Speaking of slices, each distinctive piece of the Puzzle (this never gets old!) is crafted from 41 different slices of leather, 9 articles of textile, 45 cloth armors plus the hardware and zippers. It was Anderson’s magnum opus, originally launched as a duffle bag as part of the House’s Men’s summer 2014 collection. That same year he became the Creative Director of the house.

Only when it received tremendous acclaim and became the most-talked about item in the show was the Puzzle released in a smaller iteration for the women’s fall 2015 collection. It was then that Anderson won the Designer of the Year Award at the age of 34 for both mens and womenswear. So men out there, if you think the Puzzle is your style, don’t be daunted by the fact that Queen Bey loves it too!

On the contrary, beloved K-drama actor Park Bo Gum carried this beautiful, suede colorblocked Puzzle in the series, Record of Youth, while some of our very own guys on tPF love it too!

So, why is the Puzzle my latest man-bag obsession (and totally deserves to be yours too)? Having been in existence since 1846 (no, Louis Vuitton is not the most storied designer out there!), Loewe is exactly the kind of luxury house that caters to fashion royalty. And by “royalty”, I legitimately mean the royal family of Spain and not the Kardashians. It’s only fitting then, that Loewe’s designs are meant to stand out and its quality is top-notch. So if you’re a man who appreciates the details and subtleties of textured leather (and its smell too!), the Puzzle is for you.

Don’t you just looove it when your bag’s leather is so soft it slouches? But of course, if it tumbles and/or collapses, that’s a bummer. The Puzzle, however, achieves a striking balance, managing to slouch just the right amount and yet stand on its four futuristic-looking metal feet when you want it to. But even if you’re among those who like their carryalls to melt into a puddle of smooshy soft leather, fear not, because the Puzzle can be folded into an entirely flat shape! In fact, the Puzzle can be worn in (gasp!) five different ways—as a top-handle, over the shoulder, crossbody, as a backpack or carried as a flat portfolio/clutch! Pretty versatile, eh?

Speaking of versatility, the Puzzle probably comes in every possible colorway and material, from bright hues to pastels to PVC, suede, python, croc-embossed and fringes…it’s a delightful dilemma! In fact, recently, Loewe has created some highly limited edition, summery palm tree pieces in collaboration with Ken Price that have absolutely won me over. Not only that, the Puzzle is one of those few bags that colorblocks exceedingly well, even for men, and Bo Gum’s version is probably one of the most go-with-every-imaginable-outfit pieces you could ever get your hands on! 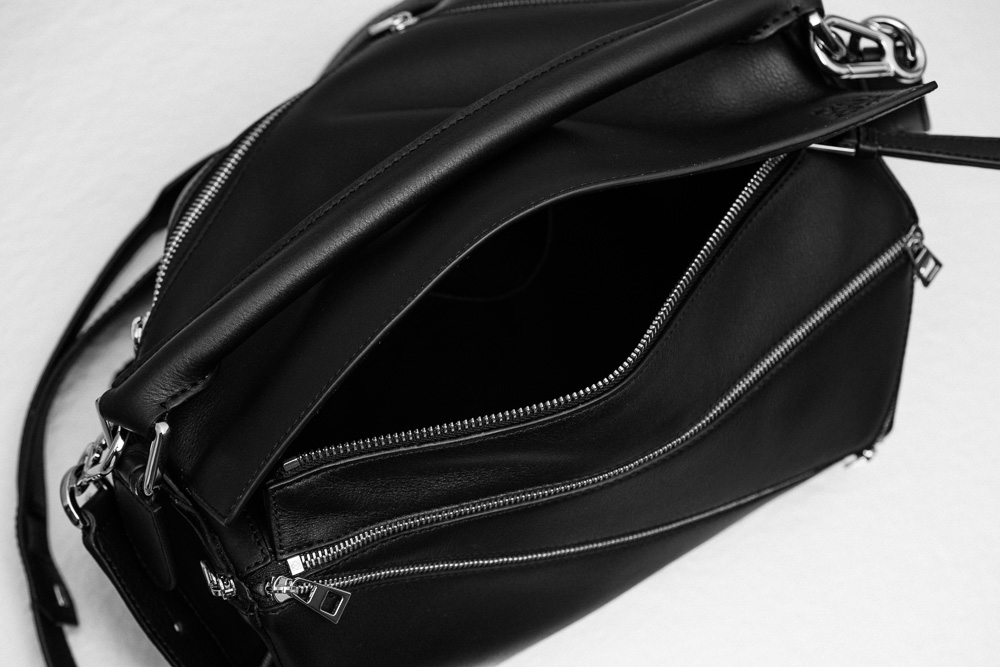 It’s also extremely spacious (small wonder, it’s a duffle after all), so you might be able to fit your documents, gym clothes and possibly sneak your laptop in as well, though probably not the biggest of them. However at the same time, as you can probably notice in the photo above, its inside isn’t as organized as one would perhaps prefer. The addition of a flap and a zipper, while making it super-secure, possibly runs the risk of making it less convenient to reach into. Its black interior also may become the notorious “black hole” where your belongings may not be easy to track down, an issue Megs too had identified in her Purseonals on her Loewe Puzzle. However if it’s your style, with the help of a bag organizer or a couple of pouches that is easily fixable!

Finally, Loewe is one of those designers that have much less subtle branding than the likes of, say Gucci or Louis Vuitton, so it’s perfect for fashion-heads to gain glances of admiration and envy from like-minded people, while wow-ing those who don’t know about it with its unique shape—a win/win! The house’s intricate logo is something that I can never seem to remember either, so every time I encounter it, I start wondering “that’s a pretty logo, I wonder which brand it’s from?” and I’m pretty sure that happens with others too. Its distinctiveness, however, doesn’t seem to put a dent in its resale value, with listings on Fashionphile reaching up to an amazing 97% of its original price! Not a bad investment I’d say! 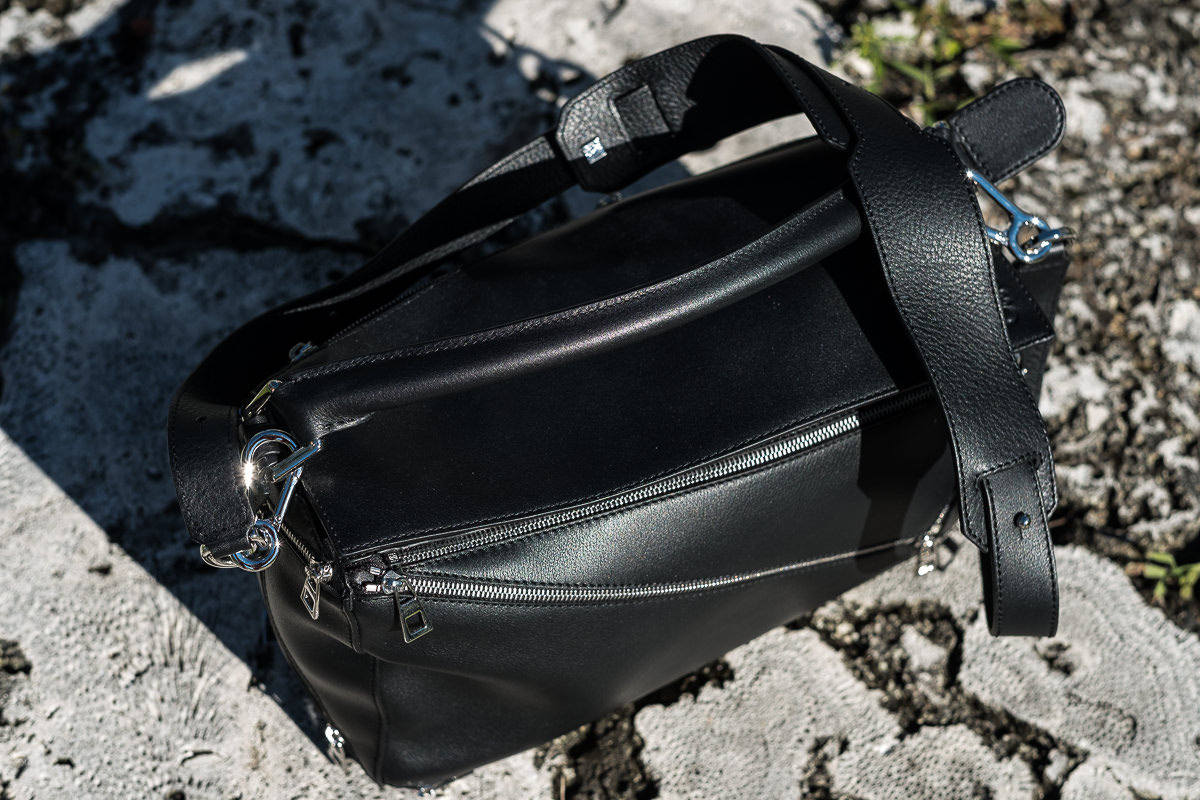 You know how there are some bags that look very trendy but actually are classics? Nope? Me neither. But by the look of the Puzzle’s trajectory, it may have started off as a trendy, boxy, jigsaw-y bag for men, but now, six years after its inception, it continues to grace the hands of both male and female celebs alike. From Bo Gum to Ellen Pompeo, I’d totally declare that it’s on its course to becoming a classic. What do you think? 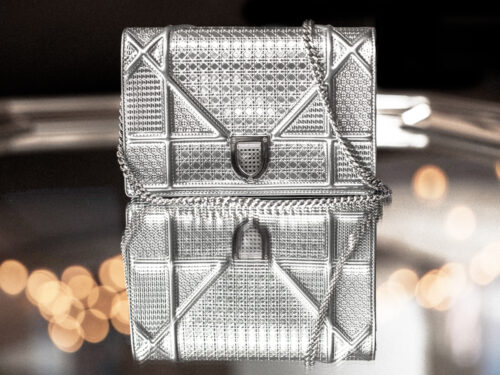 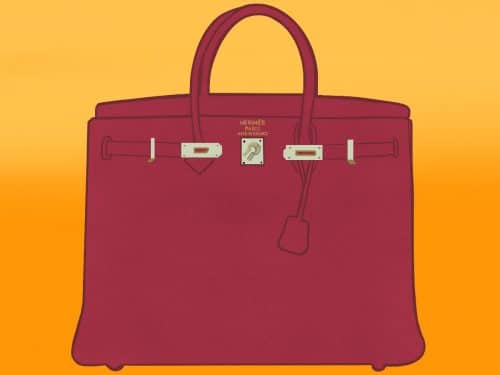 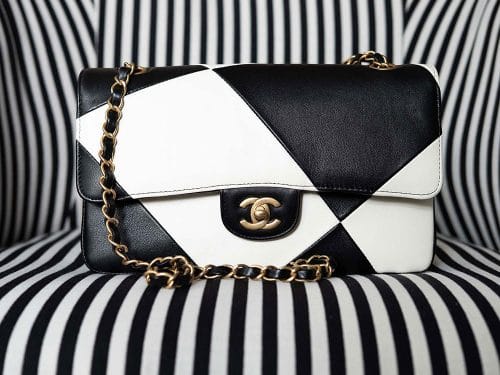