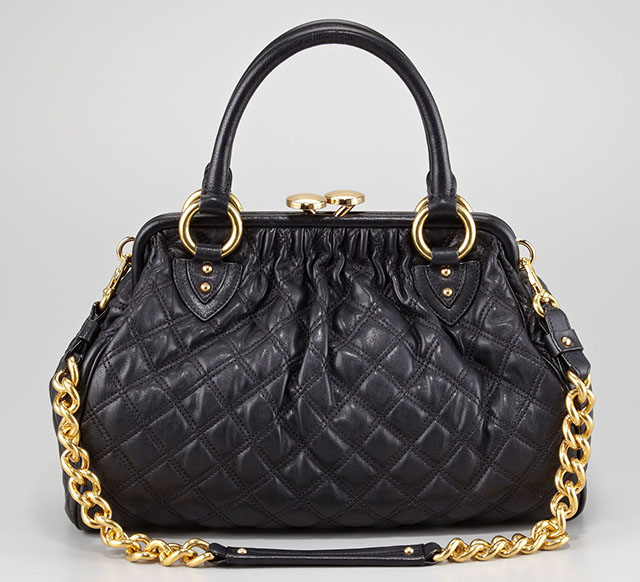 We’ve got some sad news for those of you who remember the mid-2000s It Bag heyday fondly: the Marc Jacobs Stam Bag, which has been produced continually since it first debuted in 2005, is going the way of the dodo bird. Along with it, all of Marc Jacobs’ quilted handbags and accessories will be meeting their demise at the end of this season. If you’ve been contemplating buying a throwback Stam or you want a quilted wallet or minibag in your life, now is the time to buy them up; you won’t be getting another shot.

We first got wind of this news in Friday’s PurseForum Roundup; some of our Forum members have been chatting about this development for the past few weeks after being told by their sales associates at their local MJ boutiques. This development lines up with Jacobs’ exit from Louis Vuitton, which was advertised as an opportunity for him to refocus his creative energies on his eponymous brands. It looks as though the shakeup starts immediately; this is the first sign that Jacobs’ sometimes-stale accessories line is on a quick path to major change in the near future.

Even though every bag gets discontinued eventually, the end of the Stam seems particularly notable. It’s the last of the three major It Bags of the era to be produced continuously since its birth – the Chloe Paddington and Fendi Spy Bag, although arguably more popular at the time, ended their initial runs far sooner. (Although the Paddington has been zombiefied by Chloe on a number of occasions, most recently earlier this year.) It often seemed weird that the bag, which is so heavily tied to a bygone fashion era, still made the rounds every season, but apparently it sold well enough to extend its life well beyond most of its contemporaries.

The black Stam was one of my first designer bags, bought all the way back when I was in college. So long, old friend!

If you want to pick up one more Stam or some of Jacobs’ quilted accessories before they’re gone, the Stam can be had for $1,395 via Neiman Marcus, which is not much more than what it retailed for in 2006 – $1,295, if I remember correctly. An impressive selection of of Jacobs’ other soon-to-disappear quilted bags and accessories can also be found through our friends at Neimans.

No tears here. I’ve always thought this bag quite ugly.

never was a fan

To be honest, Marc Jacobs’ Stam is one of the few reasonably priced bags from a top designer’s brand. Although I’m not a fan, I do feel disappointed to see it go. Not to mention, its unique, original charecteristics are what we(and most designers) lost after Celine became the HIT…

I think this is a very good move. MJ in appearances has spent much less time and effort on his own brand. I think with the discontinue of “the old standby bags” we will hopefully see something fresh/innovative/wonderful.

I was on the verge of buying a stam for a few years. I still think they are pretty. I think MJ needs to overhaul his brand, so perhaps it is time to move on. I hope this means MJ will surprise us in the coming months.

I always liked this bag but never purchased it. Seems like the end of an era in a way.

What a bummer 🙁 One of his most iconic bags. The whole quilted series is going 🙁 Well I hope this is making way for more iconic bags. I’m going to hold on to my stams. Sad to see them go.

I’ve always, and still do, wanted a Stam. Still can’t justify the price even to myself. Sad to see the entire quilted line go, but it’s time for a change. Marc Jacobs handbag line has been ho-hum for quite some time.

Hi Raj k, what color is your stam bag and how much do you want for it?

HI Annie
Its black lamb skin STAM bag. if your still interested i have this and looking to sell.

Yes it has gold hardware. It is in extremely good condition as it hasn’t really been used. i would like £450 for it, i have the original dust bag and full certification. Also have the receipt which I’m happy to provide. Let me know. Thanks

Yes it has gold hardware. It is in extremely good condition as it hasn’t really been used. i would like £450 for it, i have the original dust bag and full certification. Also have the receipt which I’m happy to provide.