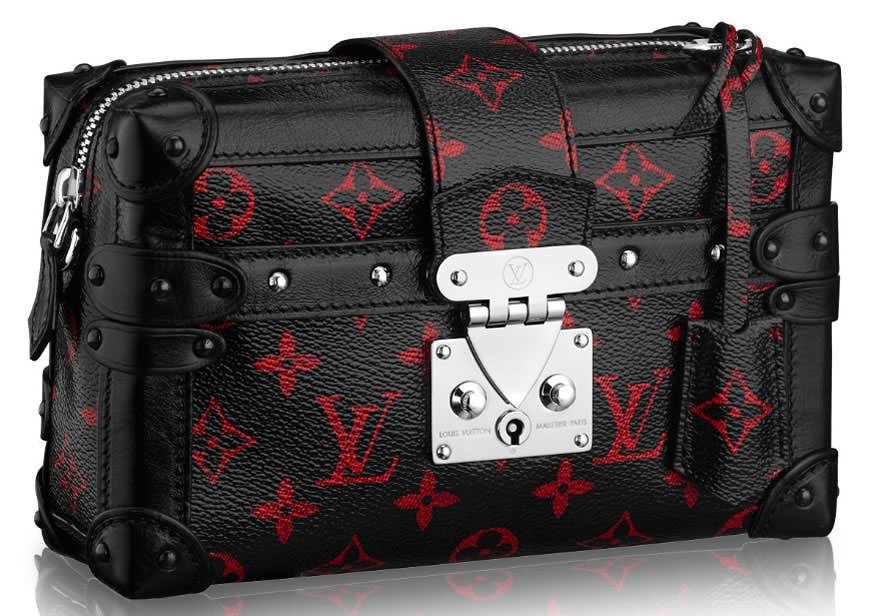 Monogram bags may wax and wane with customers, but they’ll always be a huge part of many brands’ sales. Monograms easily identify brands to onlookers, and many customers first find their way to love designers by recognizing the monogram; it’s an easy association. I was one of these people: my first Coach bag was monogram, and my first Louis Vuitton was as well.

Over the past few years, there’s a major push away from classic monograms and logos, but many brands are putting a focus back on their signatures. Louis Vuitton continuously remakes its classic LV monogram with seasonal interpretations that lures so many in.

The Louis Vuitton Monogram Infrarouge is the latest interpretation of the LV monogram, which features a black background with a rouge LV monogram print. There have been so many interpretations of the Monogram canvas, but this option feels bold and new.

Louis Vuitton Monogram Infrarouge was first spotted on the Spring 2015 runway, and while I vaguely remembered it, I rediscovered it this past week and fell for it. The bold black and red variation looks stunning on the Louis Vuitton Petite Malle, which has become a fan favorite. There are two other bags currently available in the print, but if I had it my way, I’d get the Petite Malle in Monogram Infrarouge and call it a day. Prices range from $3,550 to $3,950 via Louis Vuitton. 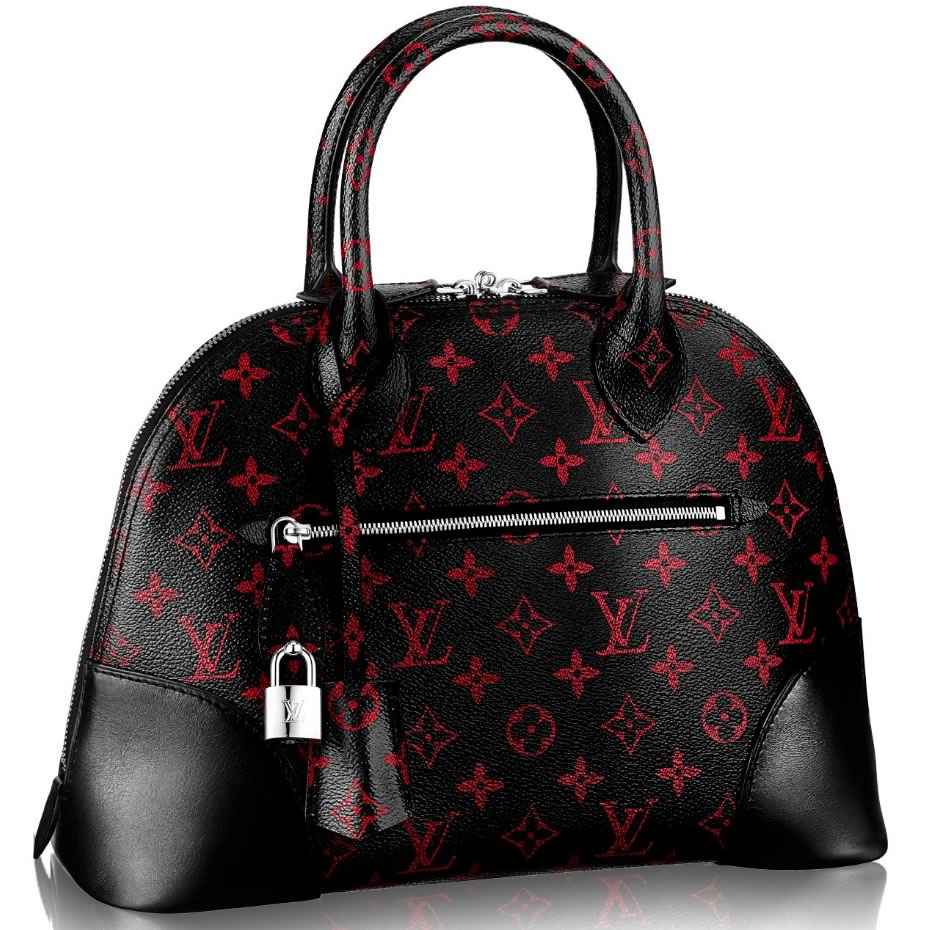 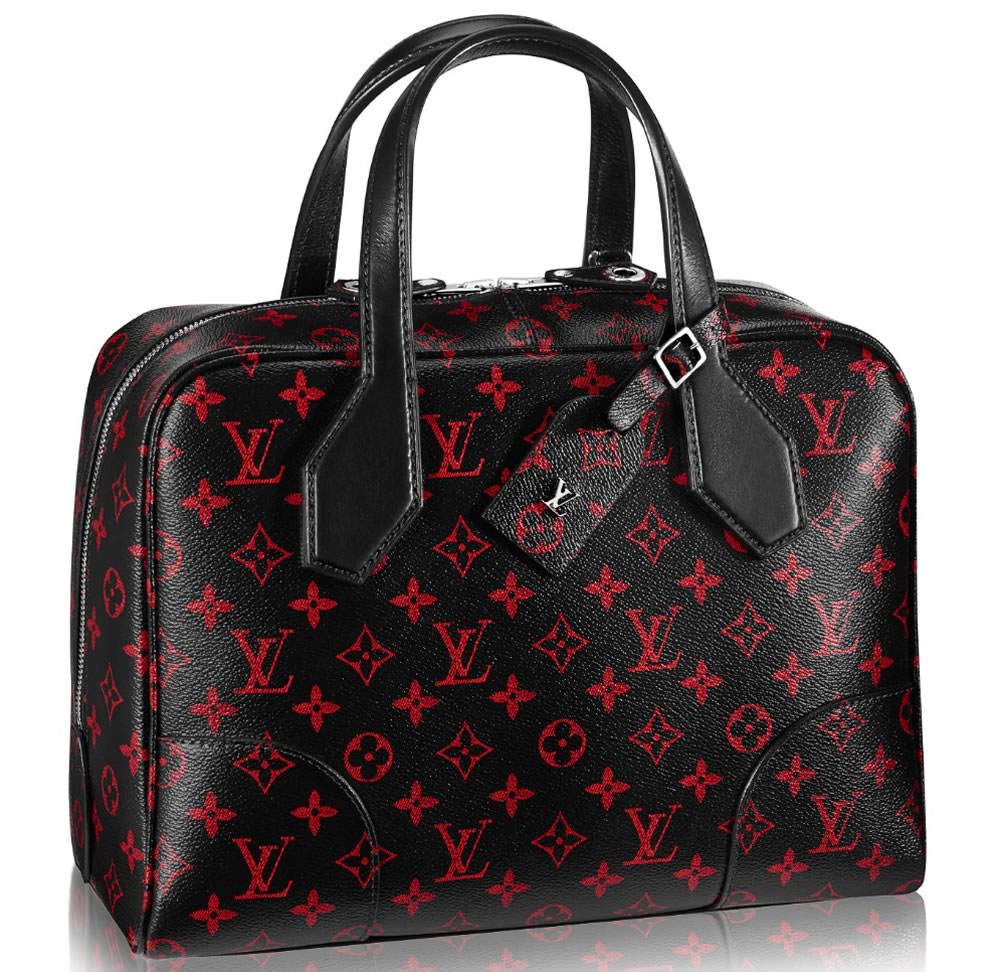 I was at the LV boutique on yesterday to look at their SLGs, and the Petite Malle was front and center as soon as you walked into the store. I really liked that it was soft but looked structured. Not much room in it though, and the color looks better in person. Not willing to spend $3600. I’d rather have an everyday handbag.
I’m not sure why there are some want LV to get rid of their monogram. It was created by Louis Vuitton’s son in 1896. I would venture to say that it’s not going anywhere.

As gorgeous as the Petite Malle is, I would more likely get the Alma, so I could wear it more often and carry my world in it. But I’m loving the Monogram Infrarouge.

Believe it or not the Alma’s don’t fit all that much. I have one and it fits the basics with little room for anything else. I think it has to do with the shape of it.

I’m not much of a monogram person at all, but I LOVE this color combination. If I had a bigger bag budget, I’d pick up the Petite Malle without a second thought, even though $3,600 is objectively kind of steep.

HA!!! I meant to add in the text that I knew this had your name ALL over it. Wish they offered it on some other bags as well, maybe they’ll expand the offering

I haven’t been very interested in the standard LV monogram the last few years but the Monogram Infrarouge and the different color leather trim (e.g. Coquelicot and black) on the Retiro are definitely peaking my interest again!

I like the color combination, but I think they are too pricey for monogram canvas!

I totally agree with you. The prices would reflect 100% leather bags in my opinion. At what point are these bags going to price themselves too high and lose sales?

I think I’m the only person that hates it. It just looks so ugly and not at all luxe. Remember, just because it’s Louis doesn’t automatically make it “stunning”. Imagine if this was coach, black bags with red C’s all over them, everyone would be saying how it’s “not their cup of tea”.

Hey you guys I have found the perfect job as a full time student, it has changed my life around! If you are self motivated and social media savvy then this is ideal for you. The sky is the limit, you get exactly how much work you put into to it.

Click on this link to get started and see for yourself.

I completely support your opinion. IMO it’s a hot edgy design. I would want the Petite Malle for myself.

My immediate thought it yuck! Then I saw the price tag and I disliked it even more. No way.

JOHNSON,..I work fr0m comfort of my h0me.., by completing various basic jobs that only require a PC and access to internet and I couldn’t be happier… Six months have passed since i started this and i had profit so far total of 36,000 d0llars… Basicly i get paid 80 d0llars/h and work for three to four h daily.And great thing about this is that you get to choose yourself when to w0rk and for how l0ng and you get a paycheck weekly. _ -> JOIN NOW <-

I agree with EVERY point you made. These look horrible. Somehow the pattern / colors come across as cheap.

And, as you said, if another, more moderately priced brand offered this with their logo, everyone would be screeching. People would be rolling their eyes if this was Dooney & Bourke.

I don’t like busy monograms all over a bag and never have. And, I refuse to buy canvas, coated canvas, vinyl, or cloth bags from these designers for thousands of dollars. Bring me well crafted bags of rich leathers, suedes, furs etc. or keep it for those price points.

@Start getting residual profit each week… This is a great part-time job for everyone… Best part about it is that you can work from your home.. and earn from $100-$2000 each week … Start today and have your first payment at the end of the week…>->https://-&gt; —>START here right now…

I think this new monogram is going to look dated very quickly.

These look like fake bags manufactured in a sweatshop

LV prices have just gotten out of hand. I would much sooner buy a Chanel at this price level vs. LV. Ridiculous…