The debate continues between these very similar but distinctive leathers
13 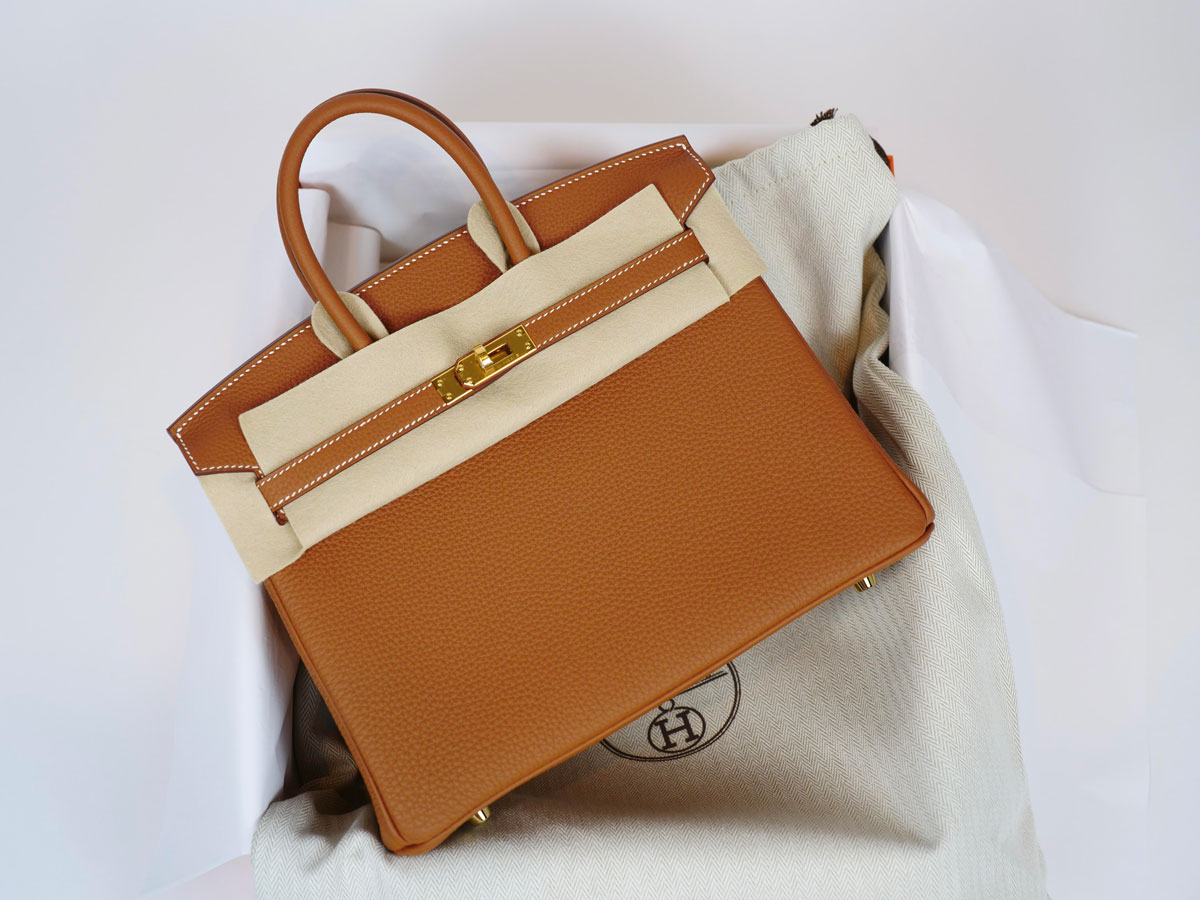 In a previous article on Hermès leathers, I touched on the similarities and differences between Togo and Clemence. Recently, I was asked which one I prefer and why. Based on the many times I have been asked that question (and the countless PurseForum threads on this exact topic), it seems like many Hermès fans have similar questions.

Togo and Clemence do indeed have several similarities, but also some notable differences which can have an impact on decision-making. 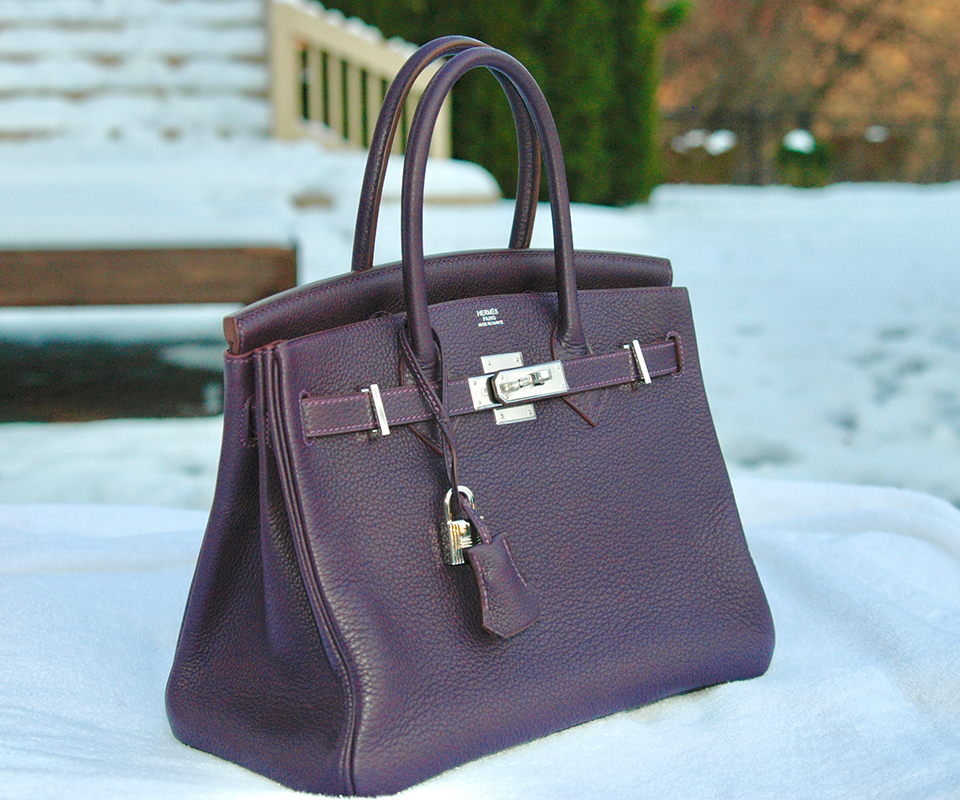 A new 30cm Birkin in Clemence. You can see a bit of slouch on the side here. 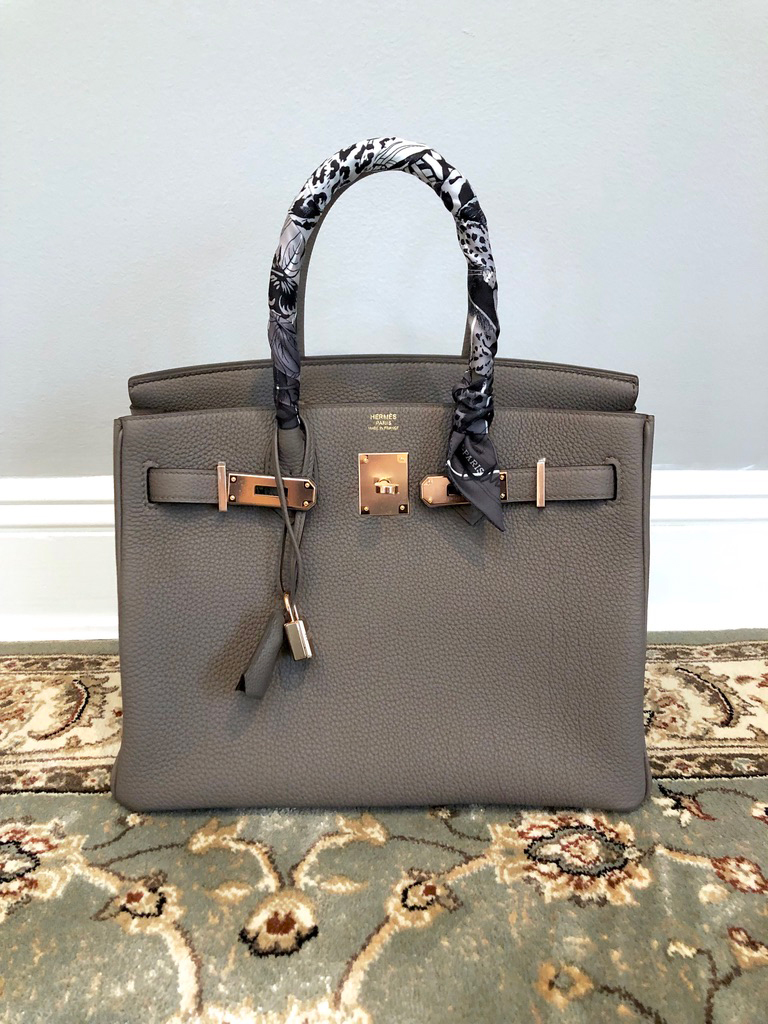 A new 30cm Togo Birkin is firmer than Clemence but still supple.

Togo vs Clemence: The Similarities

To begin with, Togo and Clemence both come from the same place; both are baby Veau (calf) leathers: Togo is the female, and Clemence is the male.

Both Togo and Clemence have a durable, textured, pebbled finish.

They have a similar feel and can handle scratches and minor mishaps very well.

They both can withstand water and most weather (of course, if any leather gets very saturated, you have to dry it as quickly as possible, so the bag doesn’t distort).

Both Togo and Clemence can handle the occasional tumble and bang. As far as Hermès leathers go, both would be considered among the most durable and easy to care for.

Togo and Clemence are both easily refurbished at the Hermès spa.

The Differences between Togo and Clemence

Visually it is easy to distinguish Togo from Clemence: Togo has a smaller grain, and Clemence has a larger grain. Additionally, Togo usually has some light veining, while Clemence has no veining.

Togo tends to be drier than Clemence.

Clemence is noticeably heavier than Togo. It is also thicker.

Togo is a firm but supple leather, meaning it is slightly relaxed but won’t slouch as much as Clemence. 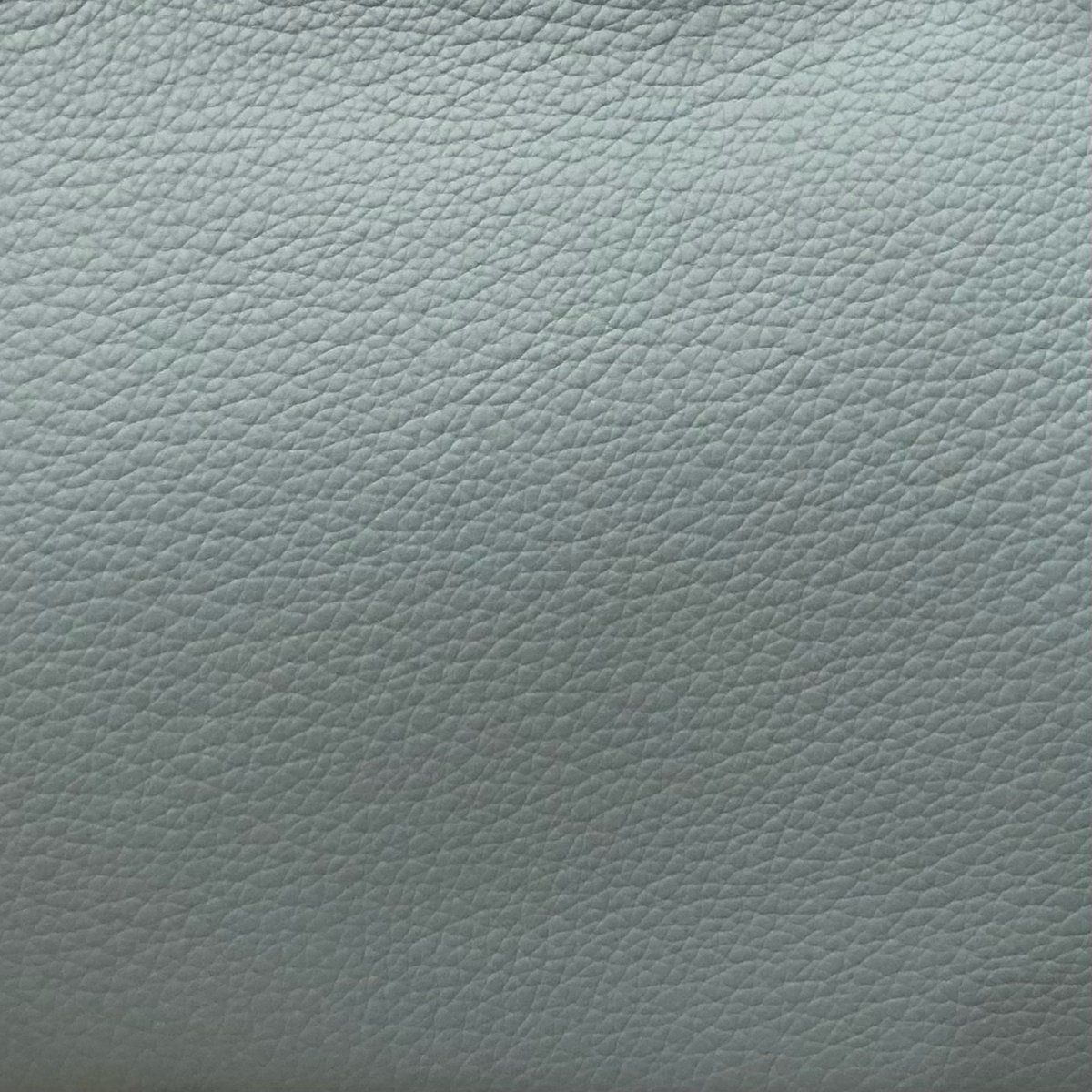 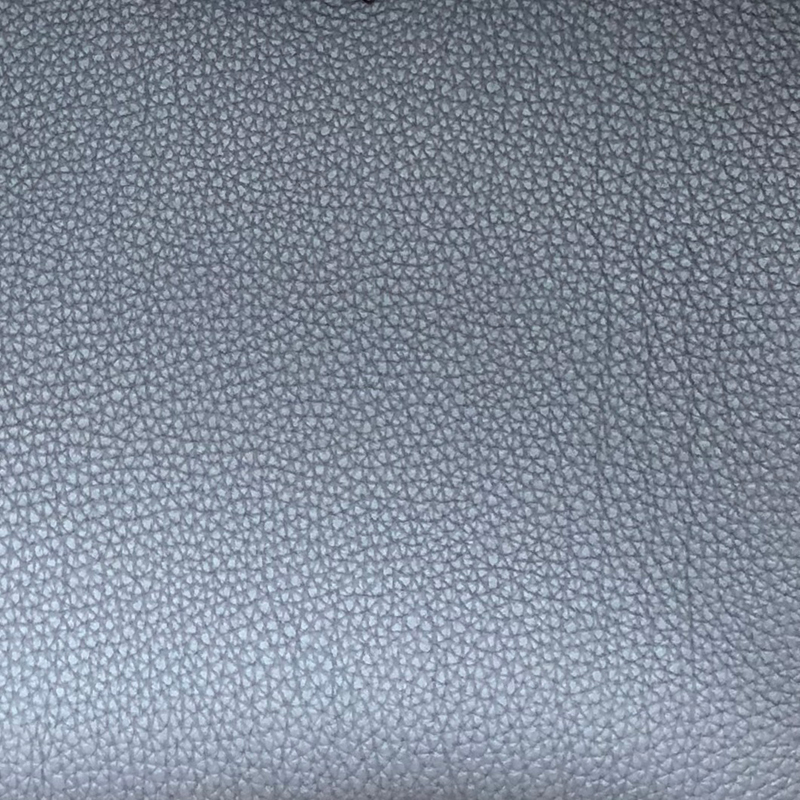 It always seemed, just in general, that these differences were significant enough to convince many Hermès clients to favor Togo over Clemence: the lighter, firmer bag wins over the heavier, slouchier one. However, while that may sometimes be the case, it isn’t always necessarily so.

Clemence may be heavier and slouchier, but the impact of those characteristics will be minimal on a smaller bag; a 25cm Birkin is not going to be noticeably heavier or even slouch all that much in Clemence, and will certainly not slouch any more than Swift – which is very popular in that size – does. 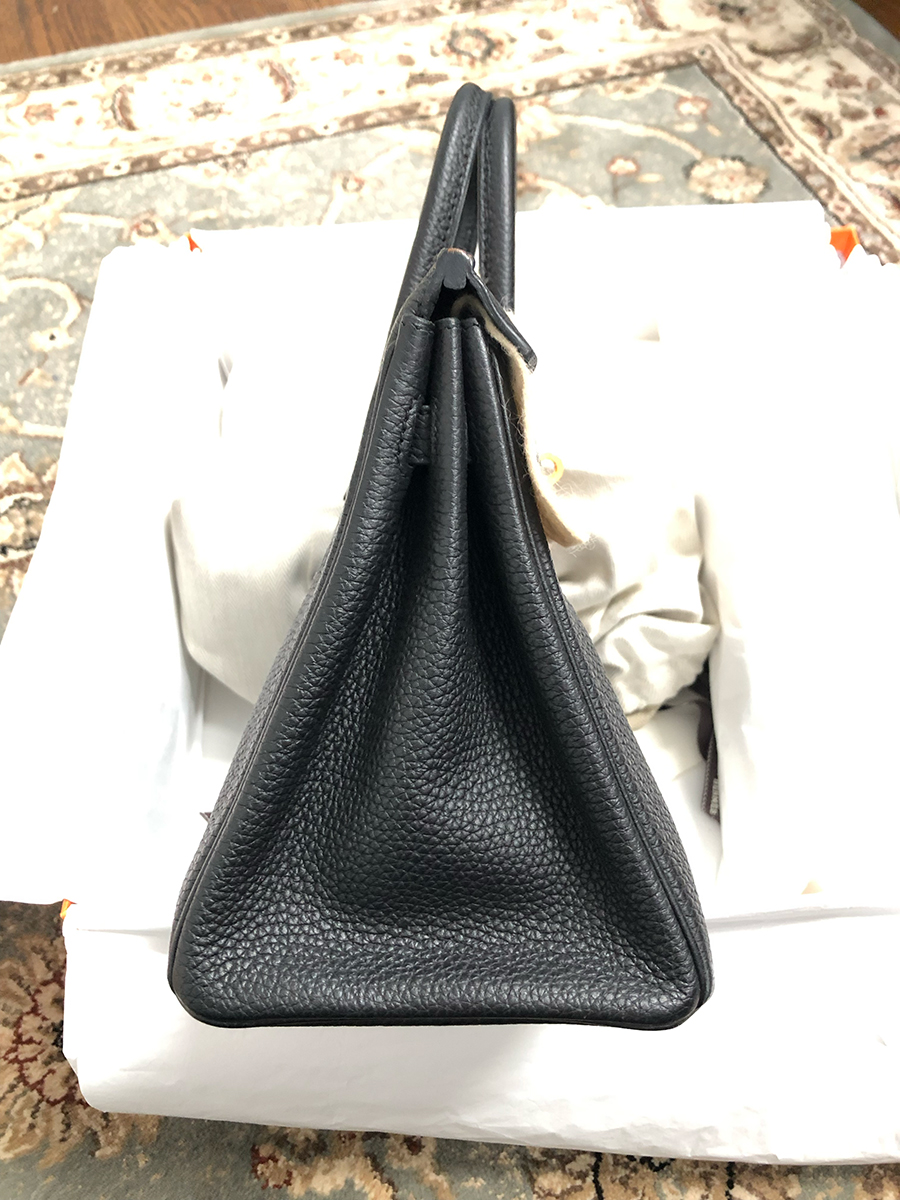 Side view of a 25cm Togo Birkin. 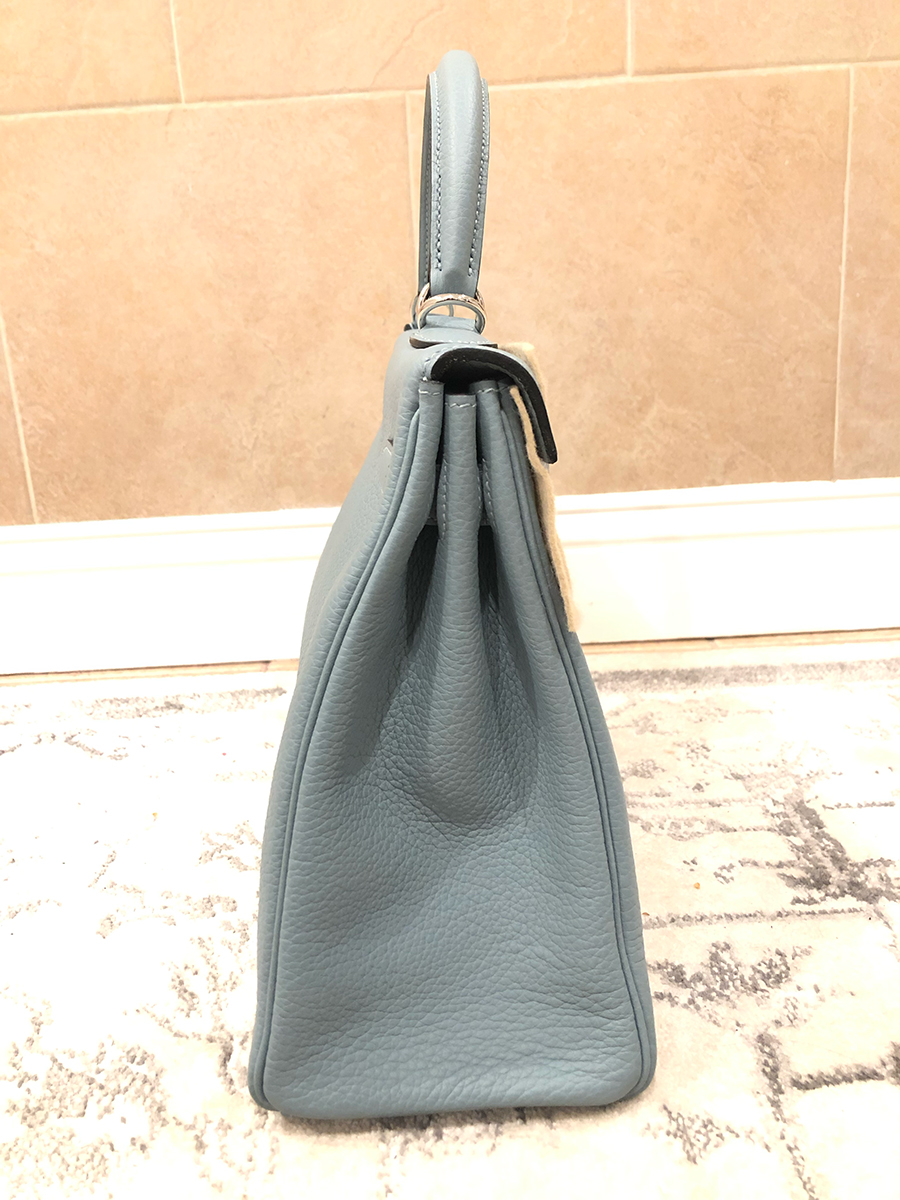 Side view of a 32cm Clemence Kelly.

Togo is a thinner leather; its thickness has been inconsistent over the years (and may even vary by season). Thinner, while lighter, is not necessarily a good thing. A nice, thick, yummy leather, while perhaps more casual, is also a bit more luxurious and also that much more sturdy and durable. 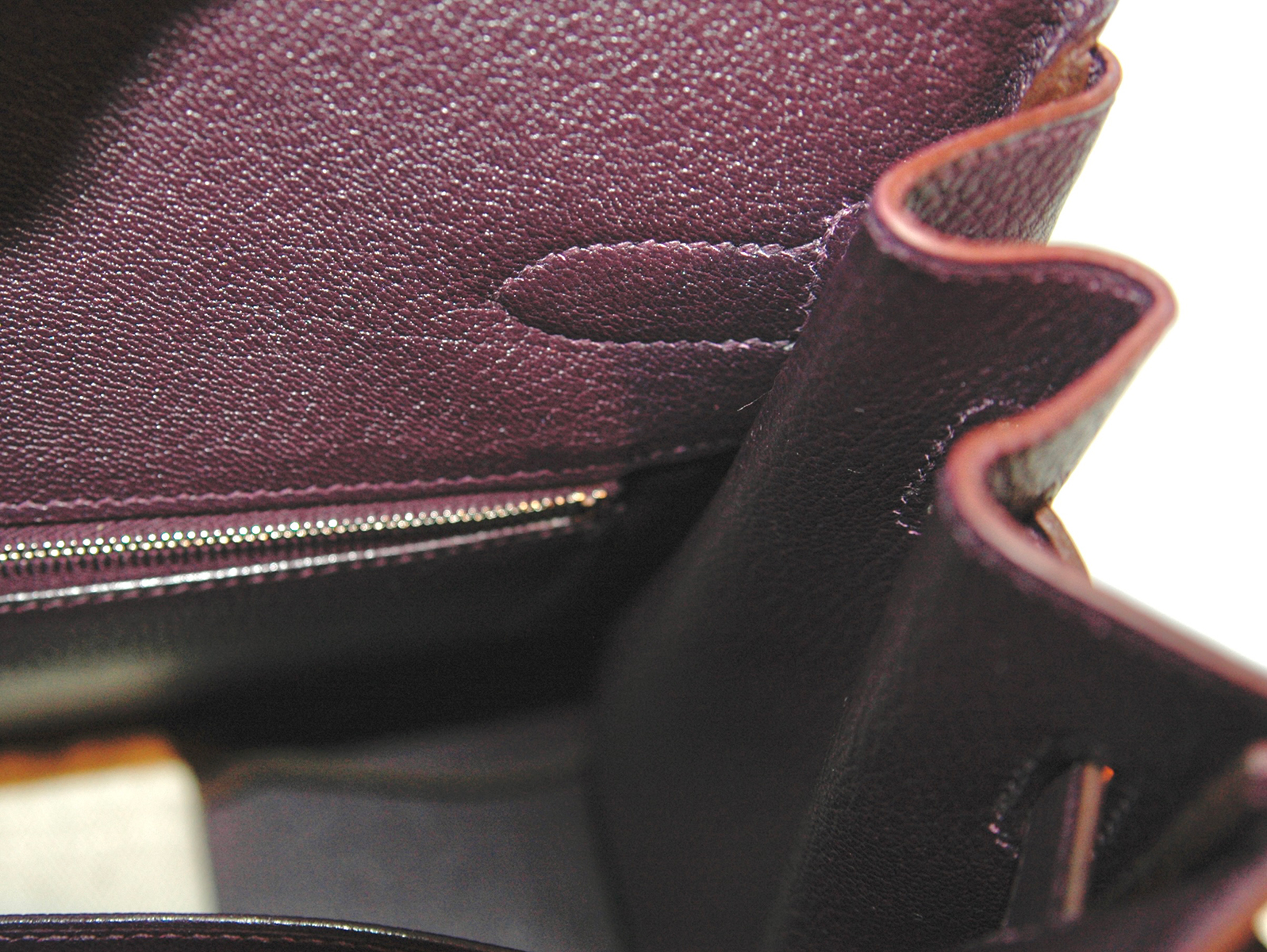 The thick edge of a 30cm Clemence Birkin. 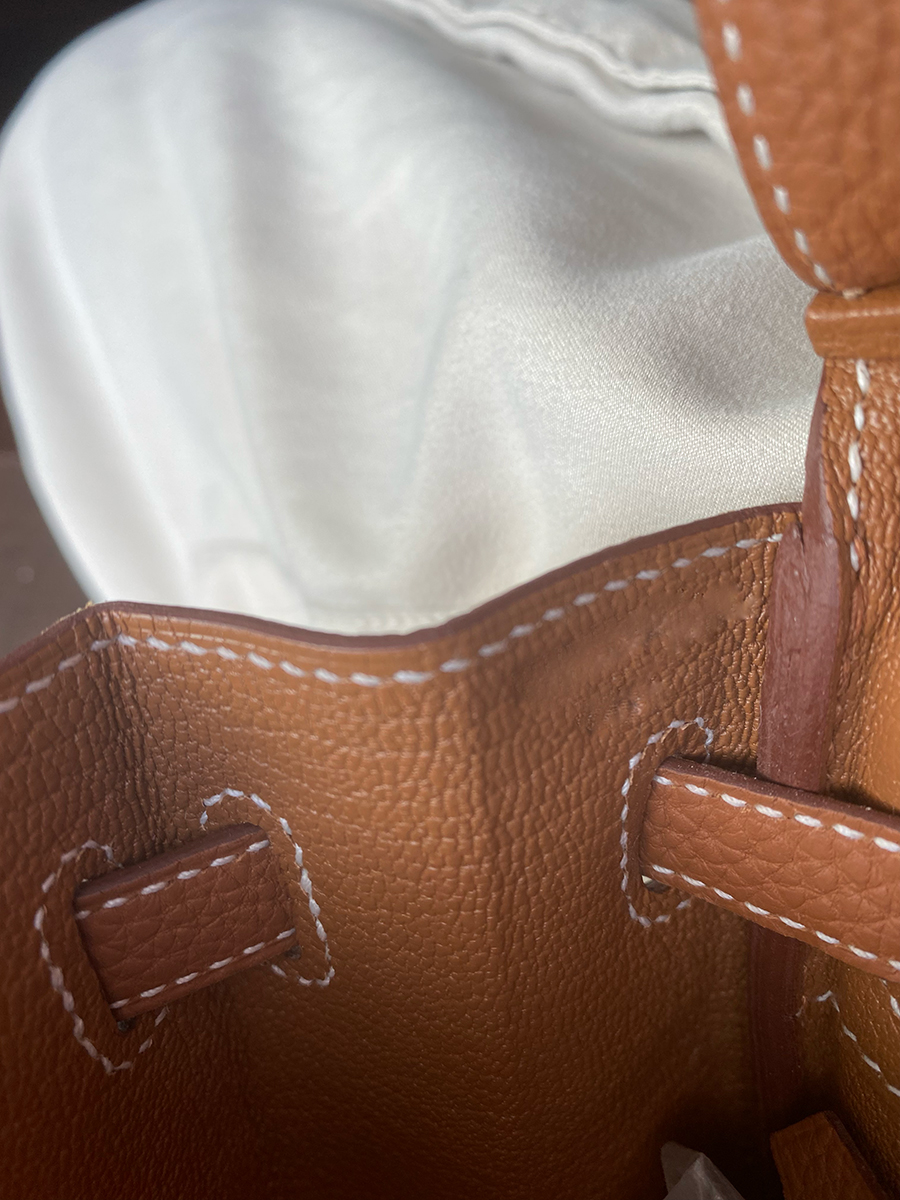 The thinner edge of a 25cm Togo Birkin.

For some people, the appearance of veins is a dealbreaker; they prefer a consistent texture throughout the bag.

Slouch is also a matter of preference; it gives a whimsical, well-enjoyed, casual, and more relaxed appearance which some people prefer. 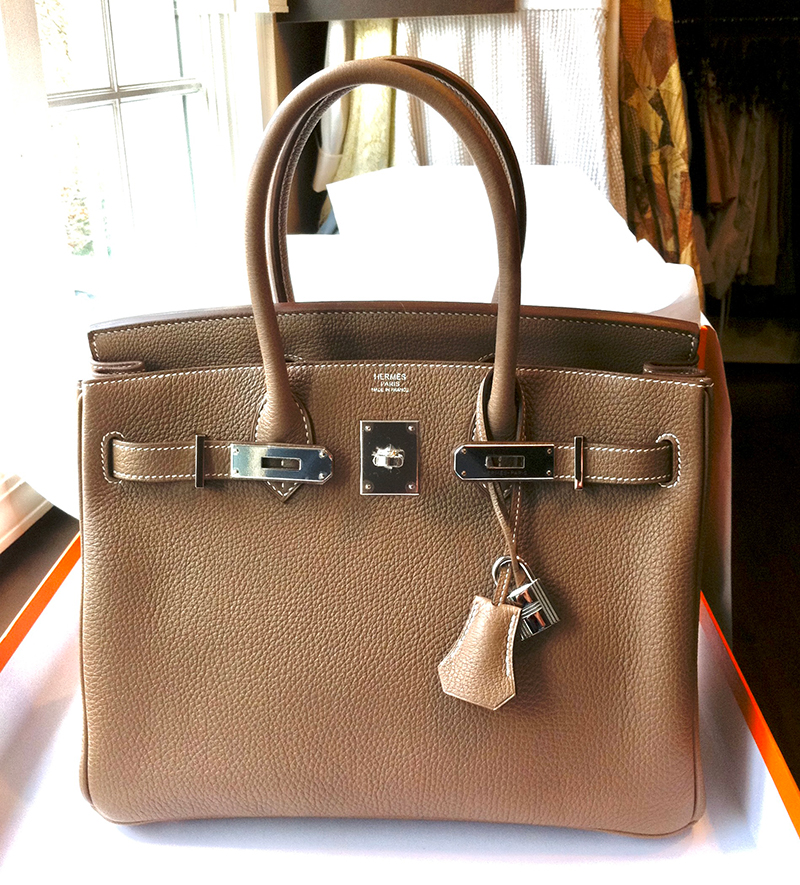 A new 30cm Birkin in Togo ~ firm but supple. 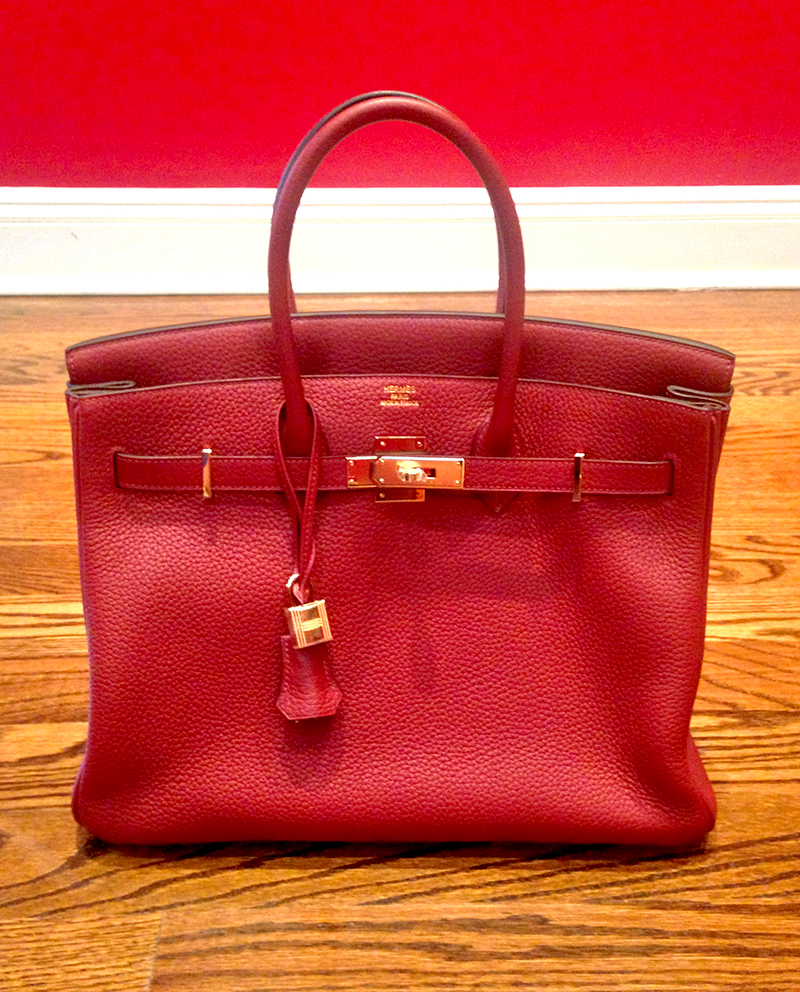 A new 35 Birkin in Clemence. The larger-sized bag has more slouch to it than the smaller size. 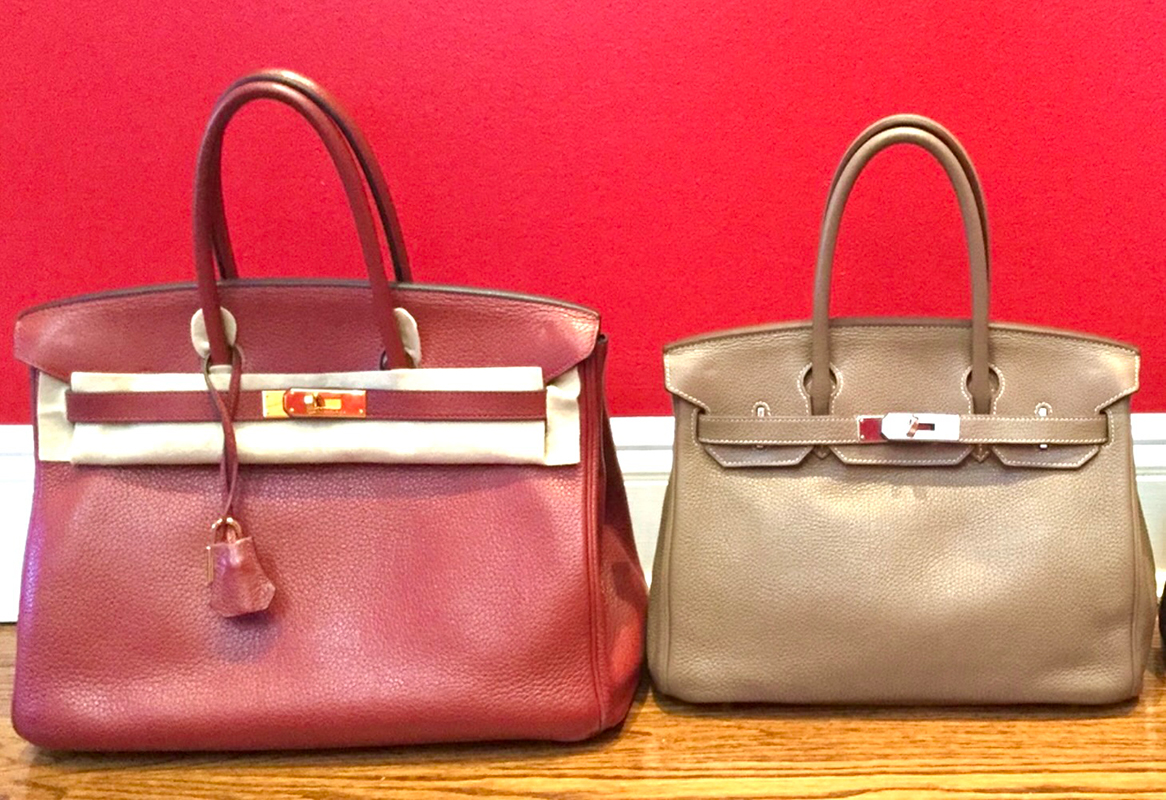 Used Clemence and Togo can both slouch, but Clemence will slouch more.

Which Leather Would I Prefer?

I’ve realized that I genuinely do not prefer one leather over the other and that any preference is specific to the bag itself and the look I want to coordinate with whatever I am wearing. I love both types of leather and would not hesitate to get a bag in either (although perhaps not a very large bag in Clemence nor a very thin bag in Togo). I think, as with anything Hermès, it is simply a matter of one’s personal preferences and priorities. Happy deciding!

I have a Togo Plume 32cm in midnight blue I scored off TRR at a steal (for H!). I love the veins in the leather!!!

When are they going to move forward with a “plant based” version of these beautiful bags? I just can’t stomach supporting animal commodity businesses.

Hermès has had a plant-based leather in the works for a while; I’m a little surprised that we haven’t seen it yet. I’ve written about it previously in a news article, Here is some information about it: https://www.mycoworks.com/introducing-sylvania-by-hermes

Great article as always! So if you like the qualities of togo except for the veins, would you suggest epsom? Thx Notorious Pink!

Thank you! Epsom is so different – it’s thinner but also a lot stiffer; some people describe the texture as “plastic-y”, It definitely does not slouch!It’s also harder to maintain over time. But if you’re reasonably careful with it, you should be fine!

Can you explain how Epsom is “harder to maintain over time”? I have an Epsom Birkin. I previously bought Togo Birkin’s, but the weight became too much when I hurt my back.Thx!

Epsom is a heat stamped leather, it’s not a natural grain. Over time (especially on parts of the bag that are touched often) it starts to flatten and lose its grain. Also, it’s very plasticky. Once the grain is scratched, white is revealed underneath. If it’s minor and just a lift, Hermes can potentially manipulate it back down and flatten it down. If it’s completely removed, almost nothing can be done. The more work that’s done on it, the worse it looks. Take a look at Courchevel leathers on the resale market. It’s similar to epsom and they look terrible. It’s also prone to cracking and drying out. I personally feel it’s the least luxurious leather they have. I’d much rather buy Mysore. The best advice I can give someone is to look at bags on resale sites in the leather you’re considering. That will be a good indicator as to how that leather will hold up over time.

I doubt I will ever have the opportunity to own a Birkin, but the purple one is to die for.

The color is Raisin and I own it in Epsom leather. 😍

I think B in clemence is way too slouchy. Togo has just the right amount of slouch. Speaking for B25 and B30.

I personally don’t think a B25 or K 25 or 28 is really going to be much slouchier than Clemence, just as I think some years Togo is a bit too thin for my taste, but of course it’s all about your preference and what works for you. 🙂

I have a b30 glycine in Clemence and love the smoothness of the leather for a such a muted color. But the togo on the black b35 is perfection for how much I stuff into it for work.