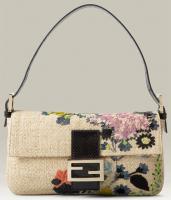 I’ve never been one for embroidery in any form or context – it almost always manages to look too cheap or too twee or too bohemian for me, and the fact that it almost always features floral motifs doesn’t help. I’m also historically not much of a fan of Fendi, despite the fact that I’ve championed several of their bags recently. Conflating the two, it would seem, would almost certainly produce a bag that I’d despise.

Except Fendi managed to make a bag featuring floral embroidery that I love – the Fendi Floral Baguette. It’s overpriced, made of straw, and half-covered in cutesy little flowers. It’s so not me. Perhaps that’s why I like it – everyone needs a total departure from time to time. 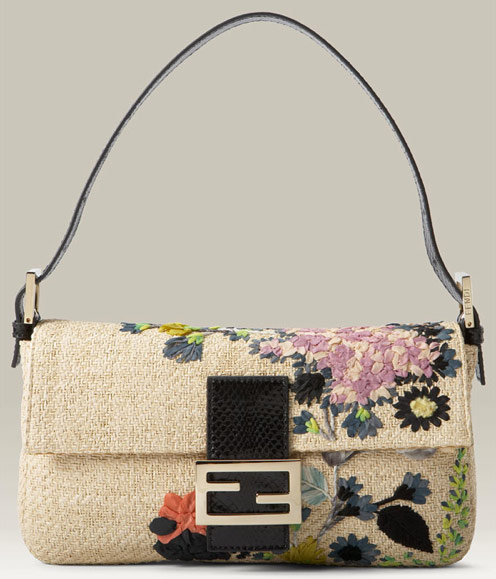 I think that my affection for this bag is mostly a result of the interesting technique that Fendi used for the embroidery. Instead of lots of little threads combining to form the big picture, the individual petals are formed with a single wide swath of ribbon, sewn into the straw backing to form flowers. The effect is much more high-end and modern than traditional embroidery, and it allows the foliage to have a soft look that a more pedestrian technique would ruin.

The embroidery is hand-sewn, which partly explains the price, but I think it’s a little spend-y for a non-leather bag in such a small size. I would likely have no use for this particular little bag, but perhaps those attending more summer weddings and luncheons than I ever have will find a utilitarian purpose for it. Buy through Nordstrom for $1960.