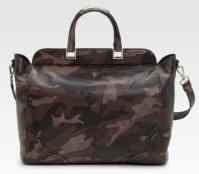 If you were hoping that military chic was going to go the way of the dodo bird sometime soon, well, prepare to be disappointed. Prada’s fall collection just started trickling out to online retailers, and the most obvious element of the line so far is its use of camouflage. Whether this is good or bad probably depends on your feelings about military chic, but despite being a fan of the trend, I’m not entirely convinced.

I’ve always been of the opinion that camouflage is best left for actual troops and No Limit Soldiers only (ok, I admit that joke would have been funnier a few years ago, but I’ve been waiting forever for the right opportunity to use it and the waning cultural relevance of a particular hip hop crew is not going to stop me now) and I like my military-inspired looks to be more vintage-inspired than Iraq-inspired. With the Prada Large Saffiano Camouflage Tote, it appears that Miuccia does not agree with me. 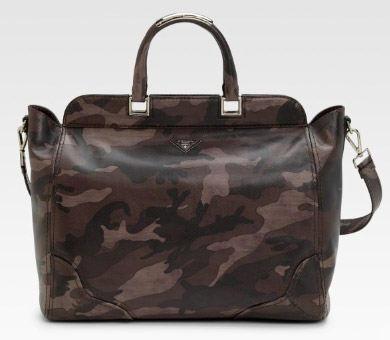 Prada isn’t the first brand to recently go this route for accessories – Louis Vuitton did a Murakami pop-art interpretation of the pattern called Monogramouflage a couple of season ago, but Prada’s version is predictably more grown-up and streamlined.

I can’t help but think, though, that this take on military inspiration marks a missed opportunity – I’d love to see Prada’s interpretations of the officers’ uniforms from times past, when military dress had a sense of fashion and presentation. With Prada’s predilection for austerity and modernism, I think those bags would have been far more interesting than the camo tote that we see here. Buy through Saks for $2495.