Being a Gen Zer, I’m Excited About the Resurgence of Y2K Handbags

Y2K fashion. Originally the name given to a computer glitch which people feared would send the new millennium into chaos, the term Y2K has since been adopted by the fashion world to describe trends of the early 2000s. Synonymous with logomania and garish looks, it was the era of the jeans and dress combo spotted on the likes of Jessica Alba and Britney Spears. Even fashion icons Rihanna and Beyoncé made some pretty questionable style choices. Both stars rocked mini skirts paired with fluffy below the knee boots at one point!

However, it was also the time of many great bags. Supermodel Kate Moss helped propel Balenciaga’s Motorcycle Bag to ‘It’ bag status and 2000s favorites Janet Jackson and the Olsen twins fangirled over the Fendi Spy’s offbeat design. Meanwhile, it seemed every hip artist in the world was working on a collaboration with Louis Vuitton. As a member of Gen Z, I was simply too young to indulge in these bag trends at the time (each week I was using up the entirety of my allowance at the candy store). However, now that I have reached adulthood, I can’t help but reminisce and think that the 2000s did bags right.

The sleek and sultry shoulder bag which epitomized ‘90s minimalism was in for a makeover at the turn of the millennium. Think of the small purse which fit neatly under your arm being held captive and cloaked in velour, leopard print, or both. Add a rainbow of colors and now you’ve got somewhere close to a Y2K shoulder bag. I remember as a child being captivated by the glossy pages of magazines breaking down Paris Hilton’s latest look. The explosion of pink fluff, over-embellished faux diamond jewelry and ultra low waisted jeans, all exquisitely held together by a rainbow monogrammed bag – I was in awe. 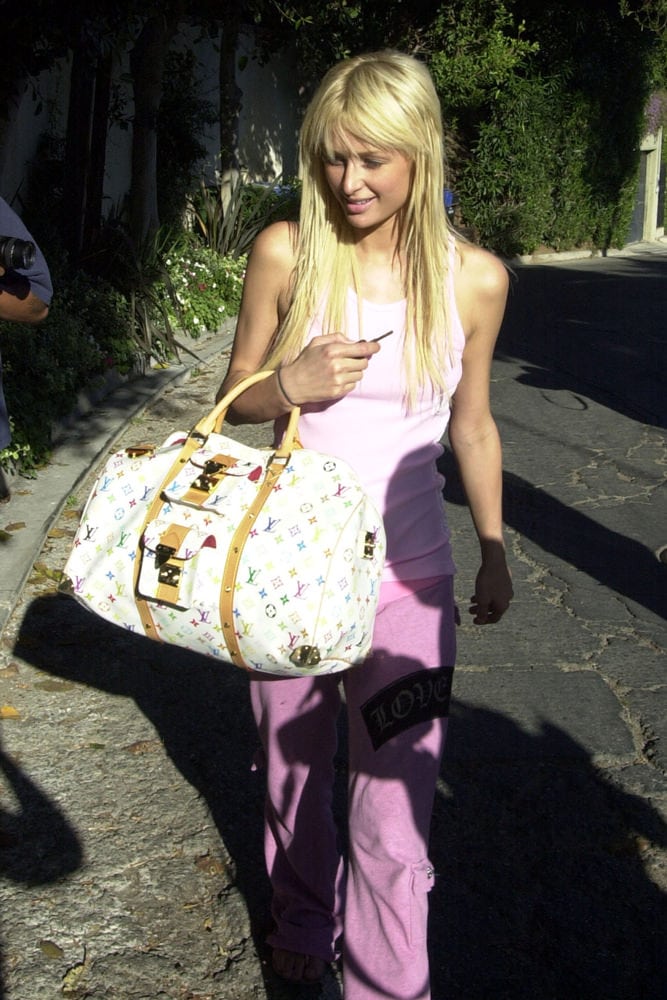 Fast forward to 2020 and these bags are back. Popular styles from the era when starlets wore newsboy caps on the red carpet have made it back into our closets. The bags are again being featured in magazines and are now trending online thanks to the advent of social media. Whether it’s bags inspired by Y2K trends or now vintage pieces from the time when The Simple Life starring Paris Hilton and Nicole Richie was still on air, the Y2K aesthetic is everywhere in 2020.

One contemporary design which undoubtedly takes inspiration from the hobo style bag trend, popularized during the early 2000s, is Bottega Veneta’s Jodie bag. Released back in 2019, this woven half-moon shaped design with a top handle stylishly knotted at one side is now gaining a huge following. Spotted on the arms of Rosie Huntington-Whiteley and Hailey Bieber, not to mention a plethora of Instagram influencers, the design is being hailed as 2020’s latest ‘It’ bag. Key characteristics of the bag, notably its curved shape and single thick top handle designed to snugly fit under the shoulder, are comparable to both Bottega Veneta’s original Veneta Bag as well as Louis Vuitton’s Croissant Bag. This half-moon shaped (or croissant, if you prefer) design was introduced by the house in 2002. Long discontinued, the style has since been spotted on Bella Hadid. Like Bottega Veneta’s new Jodie bag, the Croissant is also available in small, medium and large sizes.

The Y2K shoulder bag which epitomized cool girl vibes of the time is making a comeback. Kaia Gerber and Elsa Hosk are just some of the bag lovers rocking 2000s Prada re-editions of its iconic nylon shoulder bag. And Prada isn’t the only fashion house seeing its colorful oblong treasures at the heart of popular culture once again. Kylie Jenner and BFF Anastasia Karanikolaou both posted pictures on Instagram over the summer carrying a limited edition Louis Vuitton pochette, originally released in 2002. The Mini Monogram Conte de Fees Mushroom Pochette (it doesn’t exactly slip off the tongue) is part of the limited edition “Fairytale” capsule collection designed by illustrator Julie Verhoeven. The bag features Louis Vuitton’s rare two-tone khaki mini Monogram canvas embossed with cartoonish mushroom and heart cutouts which feature both the house’s Vernis and Epi leathers. I don’t suppose the pair need to go halvsies to afford the bag, but what are the chances of them both coming across this rare find?

Like myself, Kylie Jenner is clearly a Y2K princess born 20 years too late. She was spotted with the Dior Gambler Dice Bowling Bag from John Galliano’s fall 2004 collection on her family’s reality TV show Keeping Up With the Kardashians. The makeup mogul also posted a picture of herself on Instagram last month carrying the bag while wearing a black and green tie dye ensemble (Kylie – kudos on your commitment to trends of the era). The style is akin to the Dior Trotter Rasta Bowling Bag Missy Elliott donned in 2004. 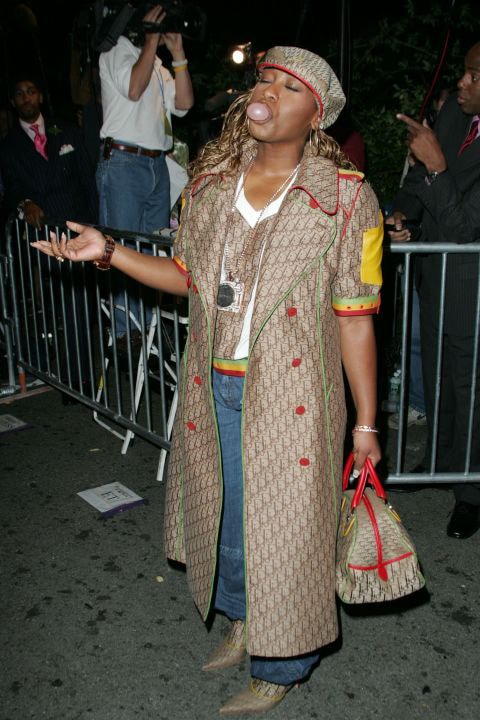 So what is the appeal of Y2K handbags? The majority of these styles were designed two decades ago against the backdrop of a completely different fashion scene, not to mention an entirely disparate world. But why are celebrities and consumers alike falling at their feet to own one? And why, as someone who was barely old enough to remember these bags, can I not wait to get in on the trend? Fashion Psychologist and founder of fashionispsychology.com, Shakaila Forbes-Bell, explains the psychology behind consumers’ desire to revisit popular styles from the past. “The revival of fashion trends has everything to do with our human desire for nostalgia coinciding with our desire for novelty.” She continues, “when old trends are repackaged as something new, consumers are essentially getting a psychological rush on two fronts”. Forbes-Bell believes social media plays a role in our love of revival fashion trends by making it easier and more accessible for people to reference historical styles. The Fashion Psychologist contends that handbags in particular are a good way to trial past trends without committing to a full look. “If people are not willing to embrace head to toe revival trends they might prefer to turn to their accessories like their handbags which will allow them to experience the same effects.”

Luxury resale companies have experienced first-hand the rewards of consumers looking to the past for style inspiration. Both The RealReal and Vestiaire Collective have seen an increase in the demand for Y2K era bags. Louis Vuitton’s Multicolore Monogram collection designed in collaboration with Japanese pop artist Takashi Murakami is experiencing a huge revival in particular. Stars such as supermodel Naomi Campbell and rapper Lil’ Kim rocked bags from the line during the early 2000s. The RealReal has seen demand for the line increase by 37% compared to last year. Vestiaire Collective’s Head of Vintage, Alice Hebrard Lemaire, reports that searches for the Louis Vuitton x Murakami collection have increased by more than 100% year over year this past summer. The rise in demand has driven up the resale value of Murakami’s designs. Hebrard Lemaire of Vestiaire Collective says, “The Louis Vuitton x Murakami collection, and specifically the Speedy HL, has seen a large increase in resale price over the last year. On Vestiaire Collective, it’s increased from $370 in 2017 to as high as $2,000 today — a 400% increase!”

“Takashi Murakami’s Multicolore Monogram line for Louis Vuitton was a welcomed break from the house’s traditional darker color palette and a playful take on its signature pattern. I think the brightness mirrored the optimism we saw at the turn of the millennium”
-Senior Authenticator at The RealReal, Avalinda Garcia

Vestiaire Collective’s Hebrard Lemaire explains how resale sites have helped propel the trend of vintage bags in general and how this is what we are now seeing with Y2K era bags. She continues, “We anticipate that the trend of looking to the past for next year’s “it” bag will only continue, especially as sustainability issues in the industry are so important.”

So it turns out that my love of all bags monogrammed, weird and whimsical is (whisper it) … a good thing!? There is an increasing pressure on the fashion industry to improve its sustainability efforts and a growing number of luxury resale companies are occupying more and more of the market for designer bags. Subsequently, looking to the past for handbag inspiration could be the new normal. It may be easier for me to label trends from the ‘70s, ‘80s and even the ‘90s as ‘vintage’ because I view them as deeply interwound with the previous millennium. Yet, it’s time I realize Y2K was 20 years ago – sounds pretty vintage if you ask me. Images of Mean Girls’ Regina George clutching Murakami’s LV Cherry Blossom Pochette and Paris Hilton pairing a pink monogrammed Dior shoulder bag with a tangerine bandeau top are vivid in my mind. However, they no longer have to be confined to the corners of my brain alongside the memory of learning my ABCs. Instead, these styles now belong on my arm in this new decade. And I am obsessed. 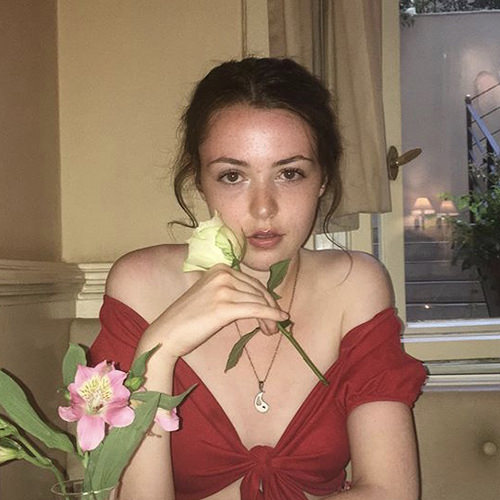 Olivia Elliott is a London-based freelance fashion journalist. Her love of all things fashion and handbags began at an early age. She loves writing about sustainable fashion and the luxury resale market but when she’s not doing that she’s probably off somewhere drinking coffee. Olivia holds a degree in journalism from the University of Kent in England.