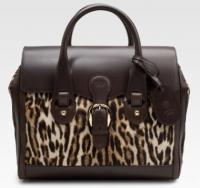 It seems as though I should have waited another week to write about leopard print as a bag trend – since that post was published, several more enormous brands have made their entrance into the fad, most notable among them Gucci. I was surprised to see the Gucci Heritage Pony Hair Boston Bag at first, but once I had a chance to think about it, the print totally makes sense with the retro feel of their most recent collection.

As several commenters correctly pointed out on my initial leopard print post, animal prints have been around for ever and waxed and waned in relative trendiness for generations. It only makes sense that when most of fashion is taking a look back to find inspiration from over half a century ago that leopard print would experience a resurgence in popularity. 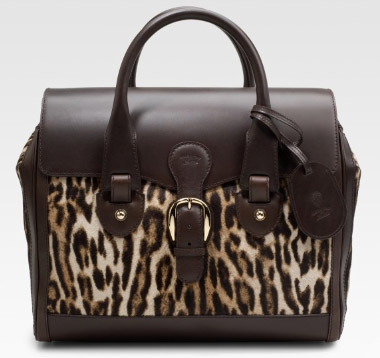 For any remaining people that think leopard can’t be done in a classy way, I think this particular bag is a pretty convincing argument that it can be. The dark chocolate leather trim is beautiful and classic, and the printed pony hair that it frames gives it a pleasantly textural vintage touch. I wish that the straps were a tad longer for easier arm carrying, but other than that, the details of this satchel are pretty much perfect. The cream-colored lining is a nice touch; in a big bag, it’s nice to be able to find things quickly. Buy through Saks for $2400.