Can Red Function As a Neutral? 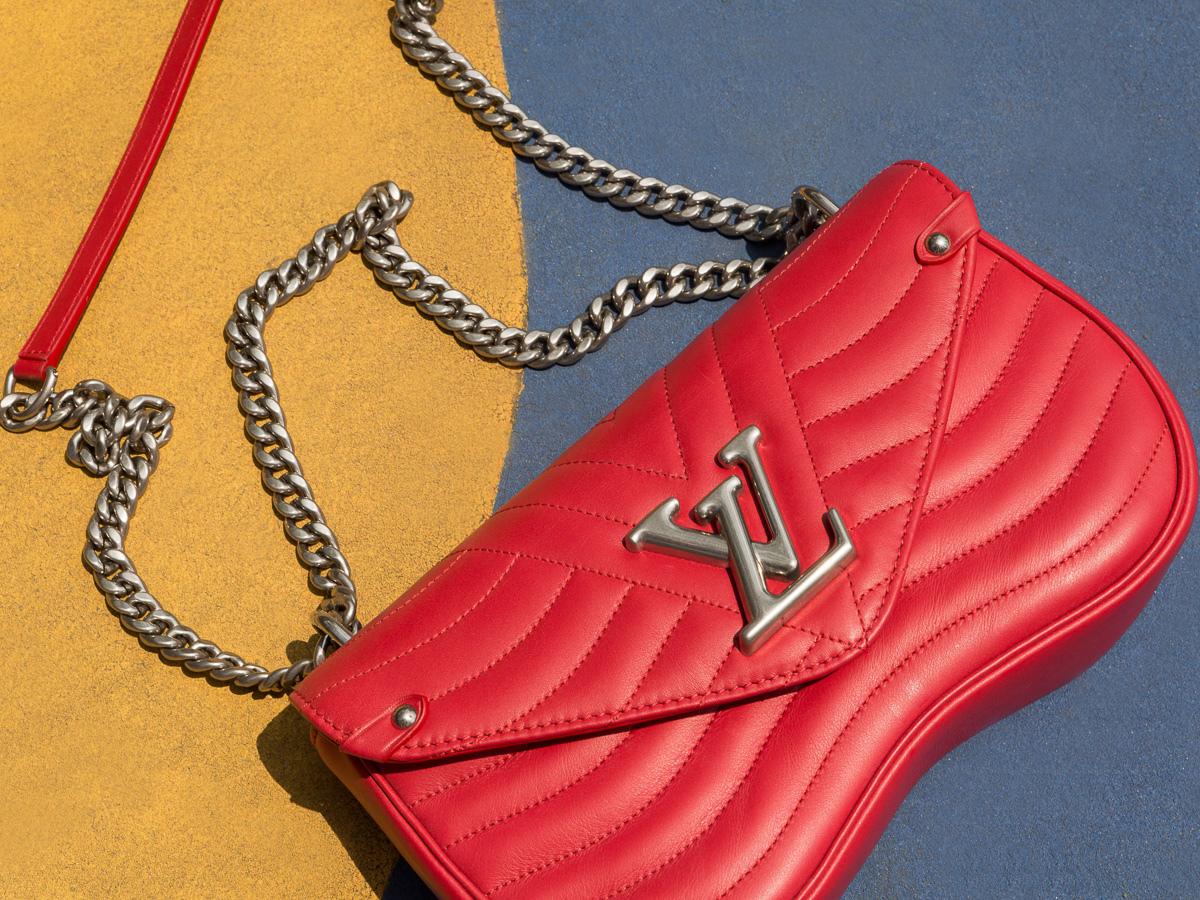 Color has been one of the dominating forces in the fashion industry in recent years. Whether it be the instantly recognizable Hermès orange, Bottega’s hot new Parakeet Green, or Pantone’s Very Peri, it seems that the list of must-have colors is only increasing as we (hopefully) charge past the dreary days of the pandemic. And nowadays, it has become much easier for one to pass off pretty much anything from purple to blue to yellow as a neutral, depending on preferences and personalities. In fact, a whole class of “bright neutral” colors are quickly becoming a mainstay of designers’ color palettes (which constitutes a lengthy discussion in and of itself).
But back before vivid shades became wardrobe staples, when it was pretty much unthinkable to use any color besides black, beige, or greige as a neutral, one color, in particular, had still made its way into the hearts of women as a versatile shade that also spoke volumes about its wearer’s personality. This color, which brought the possibility of anything beyond the traditional neutrals to the table that can perhaps aptly be called the OG “bright neutral,” is none other than red.

Surprised? Of course, you aren’t (the title is a dead giveaway, isn’t it?). At this point, it’s become quite unthinkable that a designer would come up with a collection without a red in the line-up. So, if red is as indispensable as it sounds, can we just use it as a neutral?

Well, the answer to that is yes, yes, we can. Just like there are people who swear by a chic black purse, there are also purse-lovers for whom a red bag is an armor of confidence. But before we delve into the many purposes red serves in our closets, let’s take a fascinating detour into the origins of the shade itself.

A Brief History of Red

If my high-school chemistry course serves me well, red happens to be a rather commonly occurring pigment in nature present in the form of minerals, namely iron compounds. The first evidence of the color red being used for artistic purposes by cavemen dates back to somewhere between 16,500 and 15,000 BC, the shade in question being red ochre (a kind of brick red). Since then, red has been used extensively by subsequent civilizations: while it’s a symbol of good fortune (and was a color reserved for aristocrats) in ancient China, for the Egyptians, it served as a cosmetic pigment (not entirely unlike today’s lipsticks and blushes). For the ancient Romans, on the other hand, the color red was a crucial hue in home decor, whereas for the Catholic Church, it has significant bearing as a representation of the blood of Christ. 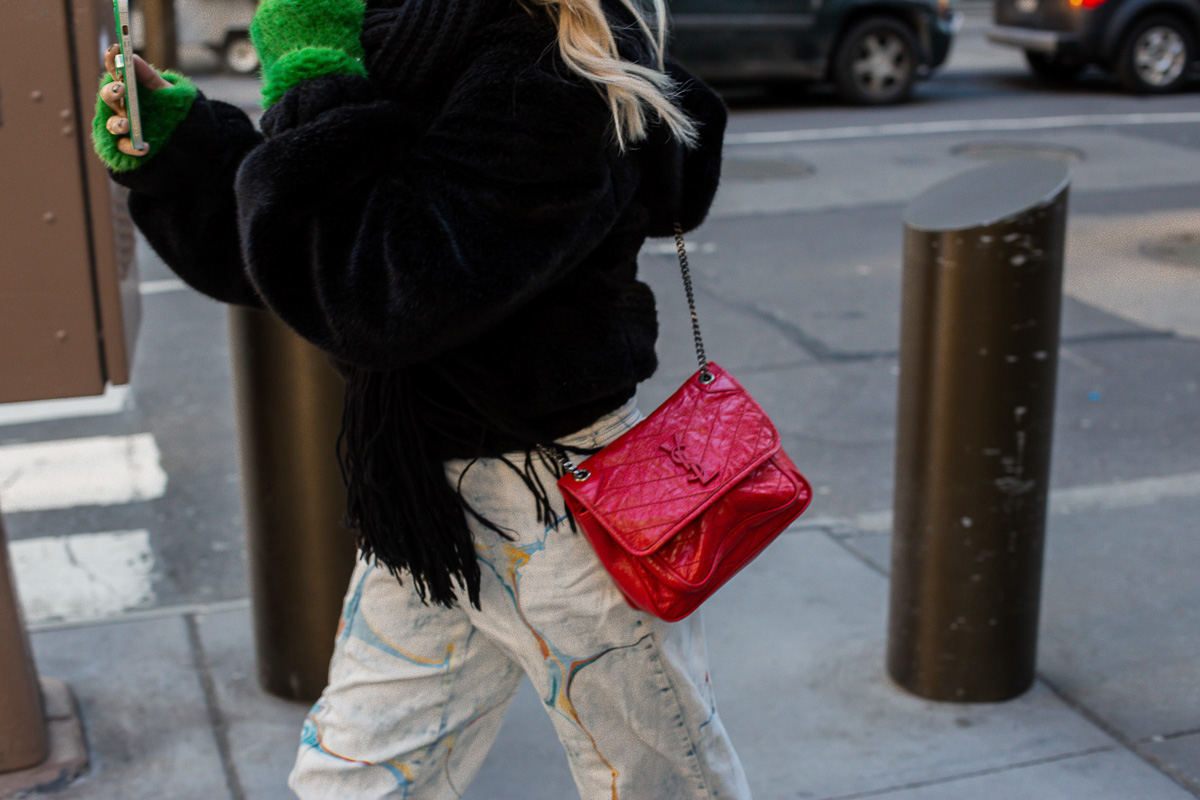 Culturally, socially and even economically, red has become an important element – the business built around Valentine’s Day or the Chinese Lunar New Year features an overwhelming amount of red in everything from clothing to food to accessories. And, of course, who can forget Louboutin’s infamous shade of Red (which even has its own Pantone code and is trademarked in several countries), that the designer purportedly came up with when he saw an assistant applying red nail polish!

The Connotations of a Red Purse

As we’ve already seen, for many, red symbolizes good luck and even wealth, so a lot of us (consciously or unconsciously) often have some semblance of red on our person. Similarly, in India, brides-to-be are dressed in red as harbingers of fertility and prosperity. So, if the color red has so many positive implications, how can we channel it into our everyday life, and what bearing would it have on our outfits and ultimately on ourselves?

Well, color has long been a non-verbal tool to communicate emotions. And the mood that wearing red instantly empowers you with is confidence. It represents strength, and it seeks attention like no other. So if you are dressing for a business meeting or finalizing a deal, a structured red purse screams business and intimidates the enemy – you are not one to be messed with! On the other hand, if you’re opting for a relaxed red handbag with a summer dress, it acts as a mood-lifter, sending good vibes to the world around you. Overall, donning a red purse denotes some form of self-belief and faith in oneself – and in today’s fast-paced world, amidst a sea of black and brown purses, sometimes a little hint of color does all the trick. 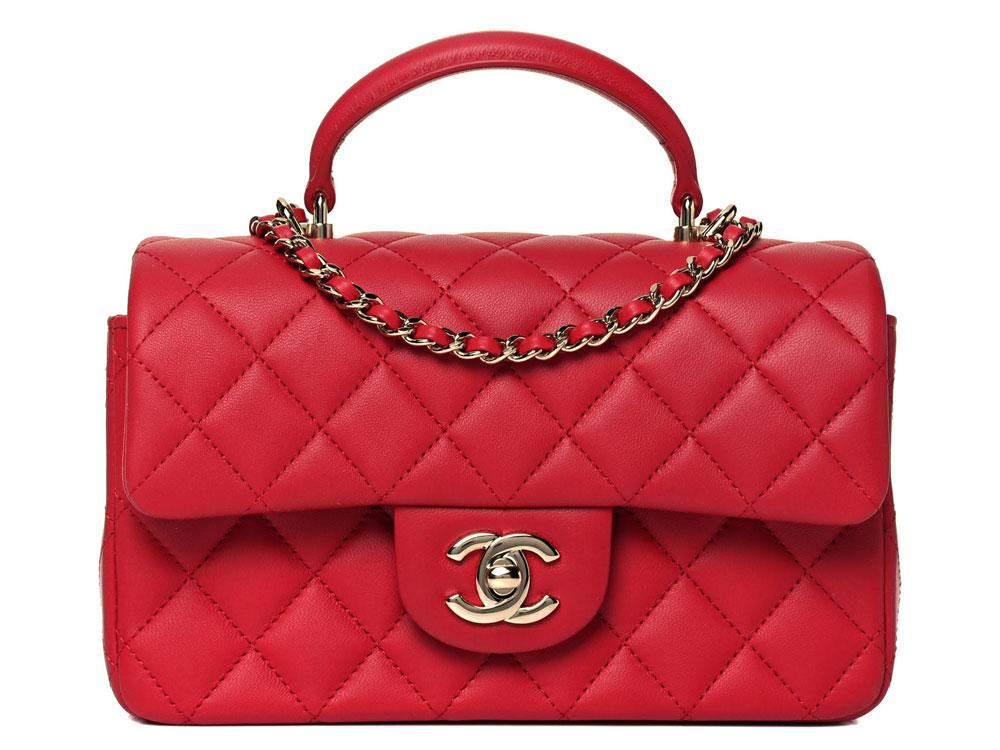 Why Red is Versatile

When we think about red, our minds instantly drift to the brightest and the boldest shade there is. But while the fire-engine red is a great choice for an everyday bag in all its vivid glory, red is not a singular color. Rather, it’s an entire color family ranging from a pale coral shade on one end of the spectrum to rich burgundy on the other. Each slight variation in shade brings about a slightly different aesthetic. So, for instance, an orange-y vermillion gives out a youthful, happy aura (and is reportedly notoriously difficult to match colors with). At the same time, a deep crimson or burgundy can be borderline sober and appropriate for even the most austere workplaces.

Besides the sheer amount of shades there are of red, the color also appears differently on different types of leather, and with that, their functionalities vary too. For example, a red Chanel lambskin flap, as pretty as it is, needs to be babied excessively to avoid scratches, color transfers, and any of the general horrors that fragile leathers like lambskin in lighter tones are susceptible to. Conversely, a Balenciaga Chèvre City in Dark Red will not only largely camouflage slight wear and tear but actually look chicer the more broken in it is!

What Suits With Red?

In a word, pretty much everything. Alright, that’s not one word, but you get the point. Truly, red is one of those shades that unexpectedly sits well with nearly all we wear, perhaps even more so than black or tan, depending on how you pull it off. My personal favorite is an all-black ensemble with a red purse, even though, on any given day, I am the most colorfully-dressed person amongst my peers, my tan Proenza Schouler PS1 being the only semblance of neutrality (and perhaps even sanity) on my person, but I’m digressing.

A red purse also works as splendidly as black alternatives, like grey or navy, and exudes power just as well, while on a beige or cream base, red provides a touch of laid-back, effortless elegance. A solid red purse is also a great compliment to a patterned outfit, like leopard, snake, or other animal prints. And on a yellow or orange outfit, provided that the shades are not so similar, the purse doesn’t stand out, and a red handbag screams summer fun!

As an aside, though, some women prefer to steer clear of a bright red purse with a vibrant green dress because it risks looking like a Christmas tree! 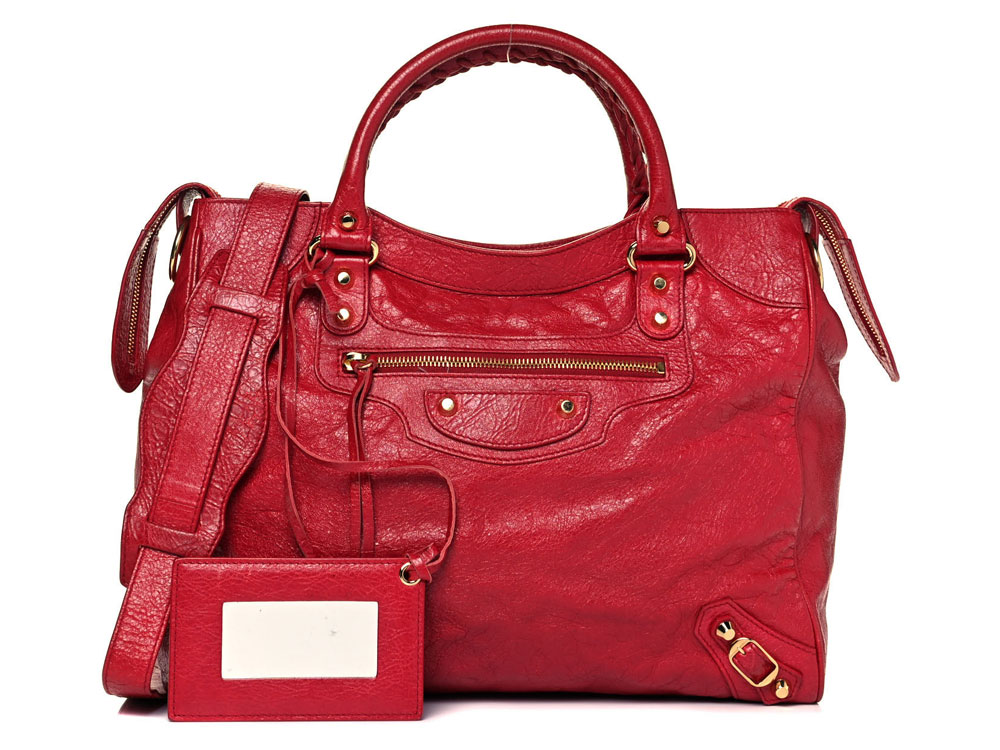 But to be very honest, red is a polarizing color for me. Yes, it’s a great neutral, an instant pick-me-up for when you want to look confident and put together without a lot of effort. But it’s also a little too bright for, say, the traditional workplace or places where you wouldn’t want to draw attention to yourself (unless we’re dealing with the more muted shades of the red family).

And in recent years, as the handbag world makes way for an increasing set of colors, red, while still a staple, seems to have taken somewhat of a backseat. Perhaps it’s a tad bit overplayed and maybe even lacking in terms of timelessness what black or tan delivers. Or perhaps lovers of red continue loving them more than ever, and we, the commoners who love black and brown way too much, who just aren’t taking notice.
Does it sound like I’m trying too hard to make red happen while I may or may not be eyeing an eBay auction for a red Balenciaga backpack? I should hope not; the shade is genuinely amazingly versatile and deserves a try from each of us, even if we ultimately decide it isn’t for us.

So, what are your thoughts on red purses? Do you love them, or are they a pass for you?

I think you can carry a red bag with just about anything you wear!

Love red on a structured bag 🩸.Very classic and just like a red shoe 👠 turns up the notch on whatever you are wearing. 💃

LOVE a good red bag!! I recently found a pre-loved Diorama in red and it’s so beautiful with just about anything. I wish I had jumped on the red bag train a long time ago.

OHMYGOSH that sounds absolutely divine – I loved the metallic Dioramas when they were launched. Is yours the metallic or the leather version?

Red is too bold. However, for reasons I don’t care to explain, I find that orange is the new black (pun not intended).

Are you talking about the Hermès orange? Just realised there are just many shades of orange as there are of red! 🙂

Not any particular designer, just orange in any and all it’s various shades. 🧡

I see, that’s great too. And an especially good shade for fall I’d say

Red is nice but it’s obviously not a neutral…

Which color would you say is the perfect neutral for you?

Red bags are too jarring imo

That’s true, but there are various shades of red too, so, you know, plenty of options.

Very true – the various shades of red require a study in and of itself!

My wardrobe is about 10 percent red, including 2 red bags. The rest of it is made of more traditional neutrals such as black, navy, cream and gray so I can get away with it. My dream Kelly would be vermilion, or a cherry red in lizard or crocodile. It’s a strong look, but I feel like in an all black or navy outfit with a red or orange bag I can give you a taste of my personality without saying a word. If I’m wearing sunglasses I can even get away with no makeup. The red bag is the red lipstick of fashion imo.

I love how you have got everything planned in so much detail, even down to the makeup. Truly hoping you get your dream Kelly someday!

I do treat burgundy like a neutral, but not a true red. That said, I love reds as a pop of color to liven up an otherwise conservative outfit.

That’s a great way to go about it!