Why We Love Bags

An Ode to the Classic Black Bag 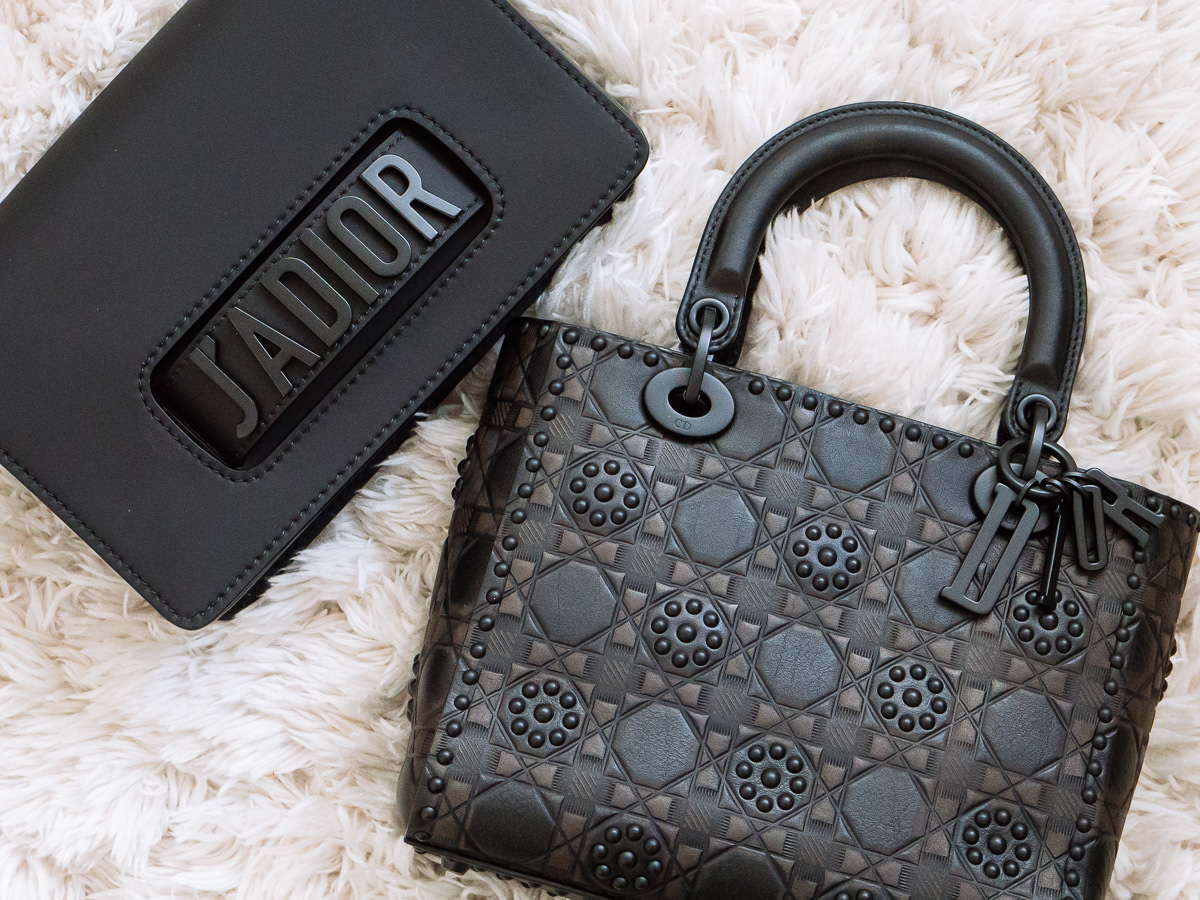 If there’s one color whose absence I deeply feel in my wardrobe, it’s black. Shocking, I know. After all, nothing screams CHIC like a head-to-toe black outfit.

In fact, all-black has become an almost individual identity among New Yorkers – a uniquely practical (not to mention, stylish) way of comfort-dressing that circumvents decision fatigue – and hence, a uniform of sorts for fashion people all over the world. And its appeal isn’t difficult to perceive. Running to the gym? Corporate event? Date night out? Front row seats at fashion week? The all-black ensemble slays them all. Legend has it that Silvia Venturini Fendi made her debutant It-bag, the Fendi Baguette, colorful and decorative exclusively because everybody in fashion used to wear black, and she wanted them all to have an accessory that broke the monotony (and she almost succeeded too)! I like to imagine that the black Baguettes that were consequently released were the result of the fashion house being forced to launch them following heavy demand – much to Ms. Fendi’s dismay – and I’m not gonna lie, those happen to be some of my favorite ones!

Now, speaking of purses, black handbags have transcended beyond the territory of fashionable nice-to-haves to absolute must-haves. They work regardless of your age, gender, social standing, or the occasion you’re attending. Even if you can’t wear an all-black outfit every day (although who’s to say we can’t?), black handbags have become the purse-equivalent of the Kardashians – you may not like them, but you can’t really avoid them either. And they are bound to end up in your closet, maybe as an oversized tote, as a going-out clutch, or something in between. But how has the black purse infiltrated our collective mindsets in a way that we cannot possibly imagine a world without them now?

They’re Not As Simple As You Think

Being a voracious reader of all things fashion, I lament the huge gap in the market that currently exists in the publishing industry for quality fiction about stylish people. I’ve done my required reading of “The Devil Wears Prada,” “Confessions of a Shopaholic,” “Bringing Home the Birkin.” I am currently taking my time in savoring “Revenge Wears Prada: The Devil Returns,” but other than these, I find that very few writers get into the little nitty-gritty details of fashion that delight purse-people such as myself (if you have any you like, please do recommend!). In fact, most purse descriptions are limited to the protagonist carrying a black bag. And I mean, really? A black purse can literally have a staggering multitude of variations, from the most basic black tote to the most drool-worthy alligator top-handle; just a word or two of description wouldn’t have hurt, right? All this to say, the color black suits every type of handbag out there, you have your boring spacious ones, you have your sleek to-die-for ones, and if you think that you’re in the market for a black purse (or you’re an author who thinks that making the protagonist simply carry a black purse suffices), then girl, you need to narrow it down more.

Well, the very fact that everybody has a black purse may be a deterrent to some. I mean, some of us do naturally love to stand out, right? But fear not, the black bag provides leeway for that freedom of expression too. And the best part is that black doesn’t mean that your options are limited – consider the cult-favorite Anya Hindmarch Stickers Ebury in black – a black tote, no doubt, but not for the faint of heart. Or the Hermès Kelly in So Black – have you honestly seen anything else that screams “femme fatale” as much as this does? But, at the same time, if you need a pared-down carryall for work, you might opt for the classic Saint Laurent Shopper Tote in black – corporate chic with a dash of anonymity! Hence, whether you’re a color-lover or a neutral-addict (or need to transition between them frequently), black has got you covered on both fronts.

When we discussed whether or not to carry a white purse, one of the most recurring complaints we found was the possibility of color transfers – something that sours the purse-carrying experience for even the most ardent of handbag-lovers. With black, however, that becomes a moot point – even if there are transfers, they simply won’t be visible! No wonder it’s the daily-schlepper of choice for millions of women worldwide; not even tan matches up to its utter functionality and versatility.

When it comes to leather and texture, however, certain things might appear more prominently on black – like scratches on smooth calfskin – more than they might have on a lighter color. Another complaint about black, especially in leather, might be that it doesn’t quite display the full patina that natural Vachetta, for instance, does. But the advantages of black far outweigh these outlying drawbacks. Even when pairing outfits, a black purse provides a pleasant contrast against browns, blues, and reds, while with an all-black outfit, it ups the chic quotient all the more!

Perhaps the biggest advantage of a black purse is that one simply can’t go wrong with it. It’s easy to see why many prefer their first grown-up bag to be black, even if it’s something like a Birkin that comes from a fashion house as widely renowned for producing colors as Hermès. And every purse seems to attain an aura of exclusivity when painted in black – nothing beats the look of a classic quilted black Chanel. In contrast, Goyard has actually made the black/gold combination of its most popular totes (like the St. Louis) slightly less pricy than the colorful ones, making it attainable to more people.

On the other hand, black continues to reign supreme on trendier purses, from the resurgence of the Prada Nylon that’s most commonly seen in black to the Bottega Veneta Pouch, the Mini Jodie, to the Prada Cleo and the Saint Laurent Le 5 à 7 (Kaitlin’s sleek black purses of choice). Black looks equally well on everlasting classics and on the hottest it-purses too.

So now that we know what makes black such a popular option, why have I, a self-proclaimed purse-person, not been able to get my hands on a black bag yet? To put it bluntly, I just haven’t found one that matches my budget, preference, and style yet. A black suede Proenza Schouler PS1, for example, had me enamored for a while, but I eventually gave up because of the ramifications of suede. A black Mulberry Alexa (which was a contender alongside the PS1 I ended up buying) turned out to be fake, which makes me slightly proud of myself for being able to identify after having extensively studied Mulberry serial codes while also chagrined because, of course, counterfeit.

But perhaps THE black purse I’d like to buy, which still remains out of my affordability and hence, elusive, is the Sac de Jour. So, while I continue my search on the resale market for THE ONE that meets my requirements, I’m savoring the thrill of the hunt, simultaneously fantasizing about the il black purse that I’d own one day. Or you never know, I might just fall in love with a black Coach and pull the trigger the very next day. Until then, however, I plan on sticking to my resolution of getting the most use out of my current lineup of bags and continuing to admire every new black purse I come across because, honestly, it’s a color nobody can get enough of.

Thank you so much!

I started my collection buying non-black bags. At that time I thought black was a boring color and one that everyone one had. But as time passed I realized the importance of the color for all the above reasons you stated.
Fast forward now my last 3 purchases in the past year have all been black bags- Celine nano luggage, Chanel boy and Vintage Chanel Diana.
I think I need to go back to buying color again. Lol

Well I’m not gonna lie, the purchases seem divine! But best of luck for buying colors too – we need a bit of both in our wardrobes!

Black bags are so classic, chic and functional. My eye always goes to the black bag.

I KNOW RIGHT! Black always seems like a good starting point regardless of the purse and the silhouette.

I still am not a fan of black handbags. I tried. Now, I only own one and rarely carry it. I can’t help myself. I love color!

Kudos to you! It’s great that you love color – it’s a really cool way to stand out!

I hope you get your SDJ very soon!

Thank you so much!