The Counterfeit Bag Market is Being Overtaken By Fake Contemporary Bags 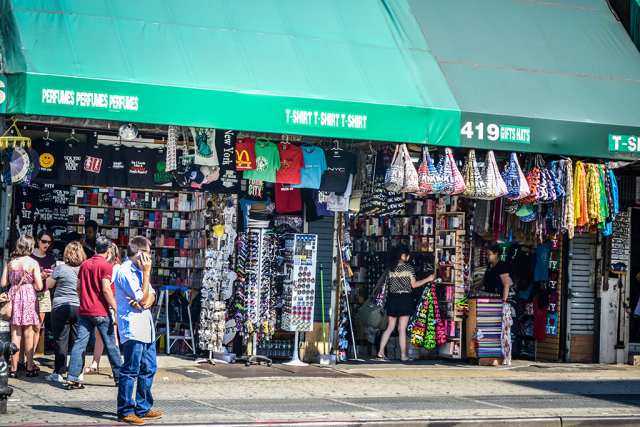 It’s not hard to remember when the phrase “fake bag” automatically brought to mind images of plasticky, faux Louis Vuitton monograms, but according to a Women’s Wear Daily investigation, that’s no longer the case in New York City’s Chinatown. Instead, knockoffs of less-expensive brands like Tory Burch and MICHAEL Michael Kors are taking over.

WWD sent accessories editor Misty White Sidell down to Canal Street, the epicenter of New York’s counterfeit bag trade, to see what the state of the black market was like. As she recounts, it once wasn’t difficult to go into any given storefront on the street and ask to be shown fake bags from premier designer brands like Chanel and Vuitton, but legal crackdowns and NYPD raids mean that most of the retail spaces have turned to the kind of souvenir tchotchkes that can be found in all the city’s tourist centers. In New York, it’s not illegal to buy a fake bag, but it’s against the law to sell them.

Instead, Sidell found that you now have to consult roaming faux bag agents on street corners, who show you photo catalogs of what they’re offering and then escort you to a separate location. In those catalogs, Sidell reported that that premier designer offerings were mostly older styles, but there were plenty of options for bags that would go for under $500 at regular retail, including Burch and Kors.

When you consider how easy it used to be to find fake versions of extremely expensive bags on Canal Street (I remember it very distinctly from a trip to New York as a teenager–there was no pretense of secrecy), it seems as though the NYPD’s and luxury brands’ combined efforts to curb counterfeiting may be paying dividends. If nothing else, counterfeiters are having to work harder to sell their wares.

As for why the market has shifted to bags that retail for only a couple hundred dollars, Women’s Wear Daily doesn’t draw any conclusions, but I do have one piece of advice: contemporary bags go on sale regularly around the Internet at reputable retailers, and when you consider the relatively small price difference between buying a marked down contemporary bag and picking up a fake on vacation, we’d suggest you take the real thing every time.

the only thing worse than buying a knock off of a $2k bag that everyone can tell is obviously fake, is buying a knockoff of a much cheaper bag that you could’ve just saved up for.

Everyone can tell contemporary knock-offs are fake, as well.

I am not at all surprised by this new trend. Not too long ago, I was in a medium-sized city in India and saw so many lower-middle class women with fake (i.e. extremely bad fakes) MICHAEL Michael Kors. Because contemporary bags are much more affordable, they are carried by a greater number of people, and this leads to more brand exposure to everyday folk in nondescript places not particularly interested in fashion. Many of these people probably don’t know what Chanel or LV is, but they are aware of MK because they saw someone carrying it.

IMHO, the big $$$ bag producers, LV and Chanel have become ridiculous with their price increases. The price bears no resemblance to what a bag made with quality authentic materials and skilled labour + a hefty profit should cost.

If it continues, these bags will become the purvue of the second wives of billionaire Russian oligarchs and the paramour of middle-eastern princes. In the long run, I think this will backfire on them. But the end, Bernard Arnault has made his money, hasen’t he?

Even if one can afford it, it’s coming perilously close to exploiting the vanity of rich people. In my part of the world, it may not be long before a designer bag becomes not a signifier of status, but of unbridled gullibility.

While, in the beginning I was a bit derisive of the TB/Coach/MK trends, I have to say, I’m becoming a believer. I’m starting to look,as wel, in my own marketplace for more artisanal, independant producers that allow me to support local business.

“…it may not be long before a designer bag becomes not a signifier of status, but of unbridled gullibility.”
This is already true in many Asian countries now. Working girls maxing out credit cards in order to buy the Neverfulls that a million others are carrying everywhere, thinking the bags will give them the opulent aurae. In extreme cases, they go into ‘arrangements’ with rich older men just so they can look like they come from wealthy families.

Sorry, who maxed out credit card buying Neverfulls?! I could understand if it’s a Chanel. Neverfulls are not that expensive, it’s slightly more than a wallet.
My belief has always been, if you can’t afford it, don’t use it, strongly against using a fake bag! At the end of the day, it’s your hard earned money and your decision to make, as long as it’s ethical and makes you happy.

I agree the Neverfulls aren’t that expensive to those of us used to the Western economy. However, in some Asian countries such as South Korea, wages are much lower and living expenses higher. In those countries, those bags are less readily affordable.

I meant Neverfulls are not expensive compared to other brand bags (except for the Made in China!), it’s not expensive even compared to its LV sisters. Whether it’s expensive to some people, it really depends on their circumstances and I’m not speaking for it. When I was in Seoul, long time ago, Chanel and LV stores were full of locals. I was told by my Korean friends that using brands is part of the Korean culture.

She doesn’t sound bitter in the least. I think she’s got some good old fashioned common sense.

You’d better stretch before you make a reach like that, you could dislocate something, booboo.

Not even slightly. I can afford the bags. I just don’t need to tell myself that they have a value, that they clearly do not.

I’ve seen so many knock off Kors bags in my area that it’s unreal. The look like plastic. The huge metal medallions are glued smack dab in the middle of the bag. Some of the monograms are NK instead of MK. On top of everything else, they’re not even made in a design that he sells. I even saw someone at work with one.
I haven’t seen what I think is a fake TB bag, but her designs rarely turn my head.

Tacky and pathetic. It’s a bag. Buy what you can afford and move on.

I have recently learned that you can now buy fake vintage bags too! A lady I know bought a fake Tory Bag, I then pissed her off by pointing out how obvious a fake it was. A couple months later that bag is falling apart!

That’s your perspective “cheap” is relative. Careful your ignorance is showing.

There are pricing brackets. In today’s dollars, a bag retailing under a $300 price point is cheap / bargain.

Why pay $50 for a counterfeit $300 bag when the original will probably go on sale for $125+? Better off saving up and buying the original.

That’s not cheap to most people who struggle to put food on the table. Get a clue.

Haha I was on Canal street last month and knock off MK was everywhere! They were horrible quality and very obvious. There was of course the ever present fake Louis but MK was dominating. Maybe this means that the contemporary market of bags is on the rise because average working people, and more affluent budgets alike, just cannot justify spending 2k plus on a bag. To some people it’s worth it, to others it is not. Totally understandable. I mix it up and personally enjoy the contemporary market because I don’t dump an entire mortgage payment on a bag. I’m allowed to buy more bags at 400.00-600.00 than invest in one 1,900.00 bag.

I agree with your points about the contemporary lines, such as TB and Coach leather; they’re generally well made and at a price point where we can purchase a variety of looks. I recently went out of my comfort zone and purchased a Gucci and Burberry handbag, both priced around 1200.00, on sale, happily, and I really can’t justify going any higher. In LA we have the Garment District which is teeming with back alley fakes. Most of the ladies buying MK and similar think they’re getting a bargain and don’t realize they can wait and scout out a sale.