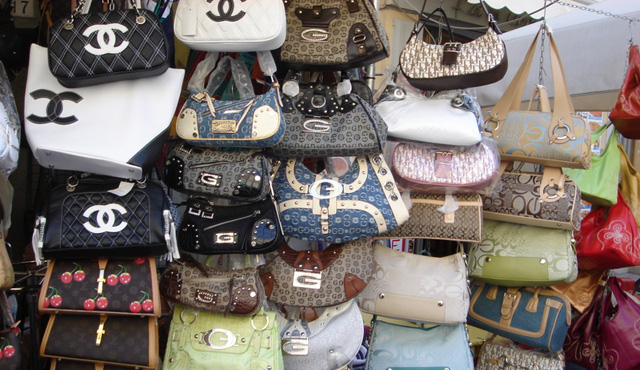 If you’ve ever walked along Canal Street, you probably have a good idea of just how big of a business fake handbags are on the black market in New York City. Even when you’re walking quickly, by yourself, with your sunglasses and headphones on (which are basically all the quick visual cues for “not a tourist, don’t bother me” in NYC), it’s hard to make it more than a few steps down that famous street without hawkers shoving price lists and stock cards in your face. Take your headphones off, and even above the roar of traffic and casual conversation, you can hear people murmuring “handbags, handbags” at every passing body. Those salespeople are out there for a reason – tourists flock to Canal to buy fake designer handbags and watches, which are illegal to sell, but not to purchase. If one New York City councilwoman gets her way, that’s about it change.

It’s always struck me as odd that selling an illegal product is illegal, but purchasing it is not. It’s illegal to purchase or receive stolen goods, after all, and shouldn’t laws on counterfeits function on basically the same principals? The rationale I’ve heard behind the choice not to punish purchasers generally centered on the fact that many, if not most, of them may have no idea that the goods are counterfeit and that it may scare off tourists who want to shop for authentic goods, but that’s always rung false to me. The people, tourists and locals alike, who buy these bags aren’t rubes being duped into wasting their hard-earned money on what they think is a real Louis Vuitton bag or Rolex watch; the goods are sought out, sometimes even by organized tour groups, specifically because they are fake. Everyone knows what’s going on. Buying a bag in a Madison Avenue boutique and buying one in a dingy Chinatown basement are vastly different experiences, and adults should be able to tell the difference.

Simply punishing the people who sell counterfeit products has done little to stem the flow of them into the market, and their presence brings in lots of untaxed, off-the-books economic activity that often benefits organized crime, the drug trade, and sometimes even terrorist groups. If there’s money to be made, especially in a city as brutal and unforgiving as New York, someone’s going to go out there and make it, whether doing so is illegal or not. The best way to dry up a business is to dry up the demand, and that’s exactly what councilman Margaret Chin, who represents Chinatown on the NYC City Council, intends to do so by making the purchase of counterfeit goods a crime. Maybe that fake Speedy doesn’t seem like such a good deal if you also have to pay bail.

According to Chin’s plan, the purchase of counterfeit goods could be punishable by a fine of up to $1,000 and as much as a year in jail, which would make it a Class A misdemeanor in New York City. According to Chin, the most stringent punishments would be applicable to people who buy in bulk, often to resell to friends back home. In those situations in particular, it’s pretty impossible to argue that those people just got lost on the way to buy authentic products. New York may be overwhelming, but it’s not that bad.

Would you support a law that criminalized the purchase of counterfeit goods?