I can abide a lot of weird stuff from Marc Jacobs. In fact, Marc Jacobs is usually at his best when he’s at his weirdest, even if not everyone gets it.

Sadly, though, when I saw the Marc Jacobs Beaded Daisy Shoulder Bag at Saks last week, I found myself feeling like one of those haters that I usually dismiss: I just didn’t get it. Not even close. 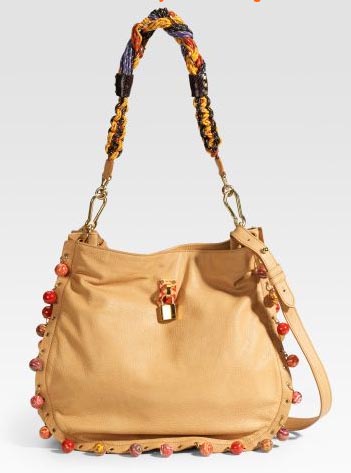 I will admit one thing, though, even though I don’t like the bag – it made me stop and look at it. Since I look at handbags 40 hours a week, I rarely stop and examine bags closely when I’m in a store, unless it’s something I really need to touch or something that I would actually consider buying. Other than that, this job sort of takes the magic out of going to the mall. With this bag, though, I wanted to touch the beads to see what they were made out of and if they were heavy. My best guess is that they’re ceramic, and they definitely added a bit of weight to the bag.

I wouldn’t say my interest was a positive thing, though – it was merely such an odd thing to see that I couldn’t help but investigate. If you’re looking for attention at any cost, then that might be positive, but mostly I felt like I was looking at it in the same way that I would look at a tacky holiday sweater. In fact, that’s what the hanging beads reminded me of the most – the extra, unnecessary crap hanging off a glittery, ironic-but-not-on-purpose Christmas vest. Perhaps its the contrast between the beads and the relatively boring design of the bag itself that makes them seem extra weird – I’m not sure. Buy through Saks for $1995.