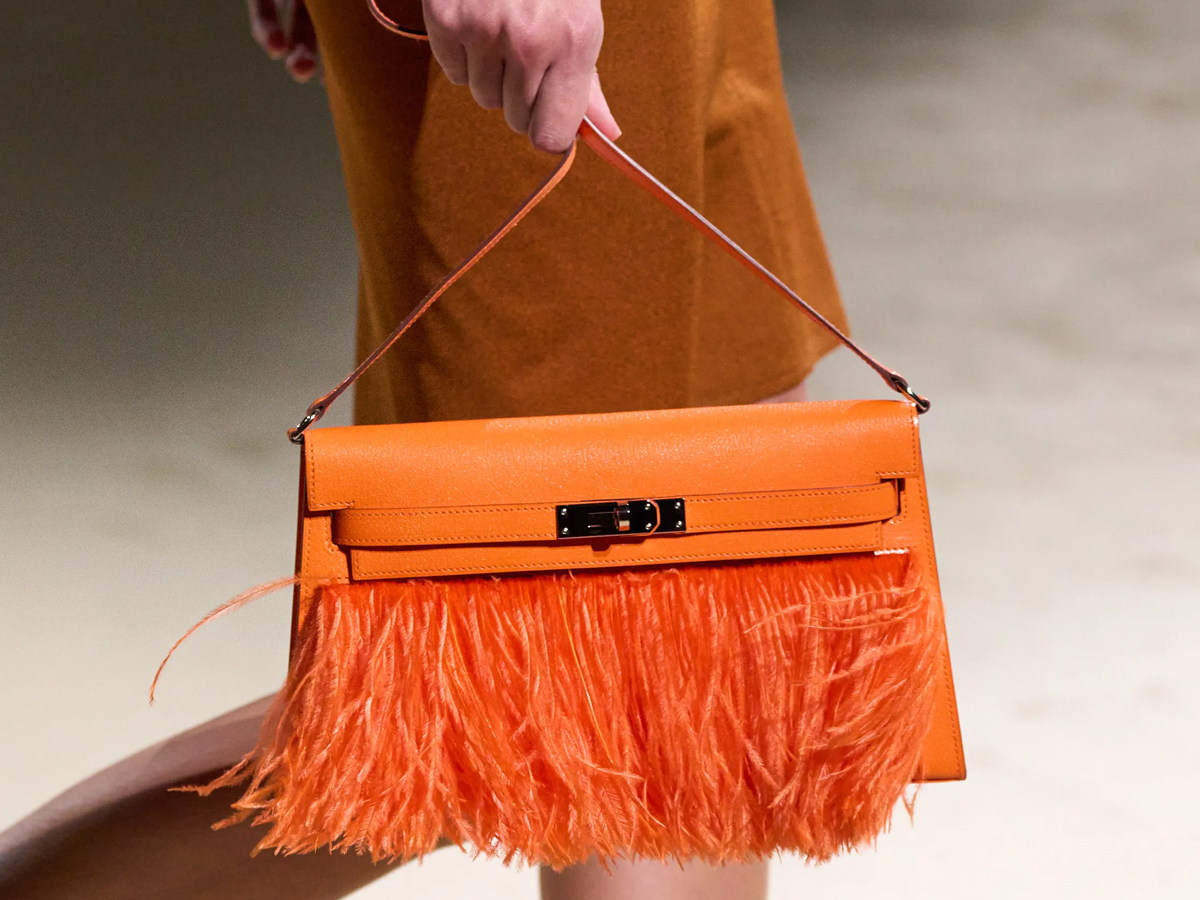 Hermès’ ready-to-wear show means it’s time to see a slew of new bags and start anticipating what we will be lusting for come next season. For its Spring-Summer 2023 Runway show and the press viewing days after, Hermès did not disappoint!

Continuing along with the themes of movement and returning to our prior lives (such as with travel) but in a new, modern way, most of the runway bags seemed new and fresh designs but were actually reworkings of discontinued bags, including the following (Please Note that the names below are not the official bag names for these styles, as I do not have those yet!):

Reminiscent of the discontinued Kelly Elan in shape, with an added strap instead of a handle on the back and adorned with feathers, this bag went down the runway in several sunset colors, including gold, orange, and coral. 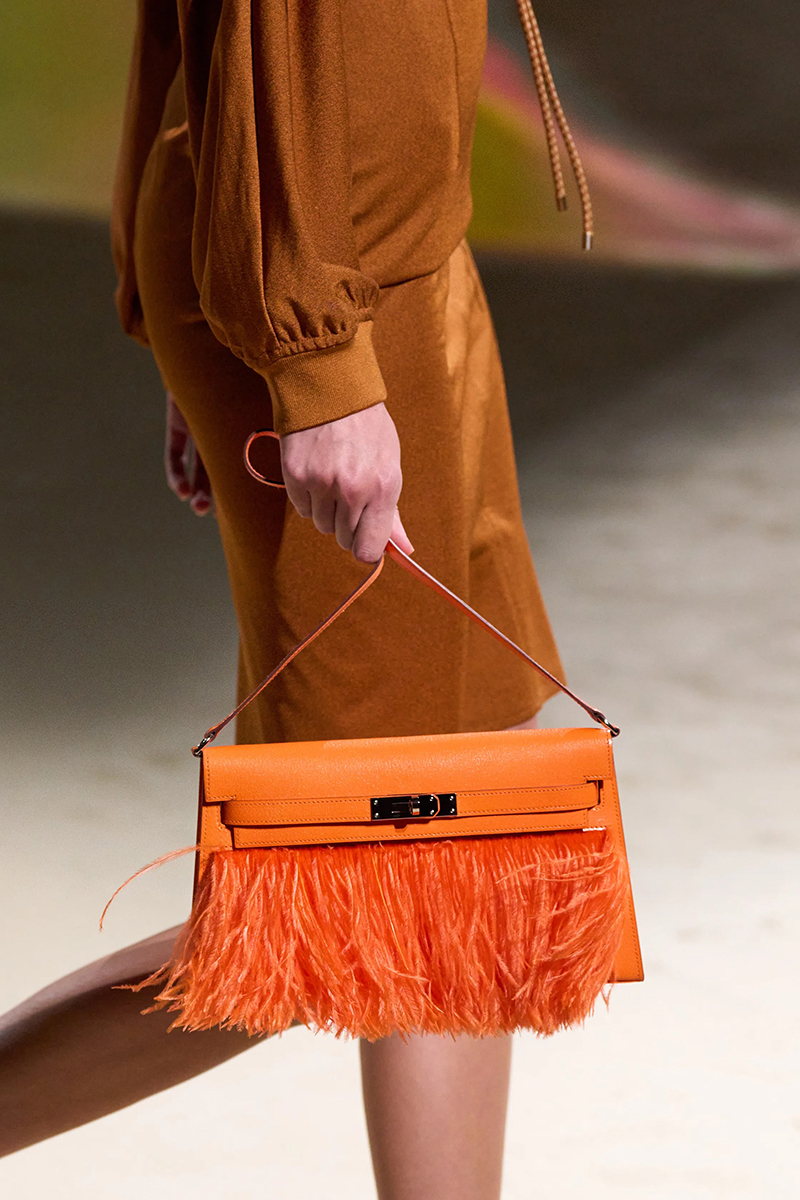 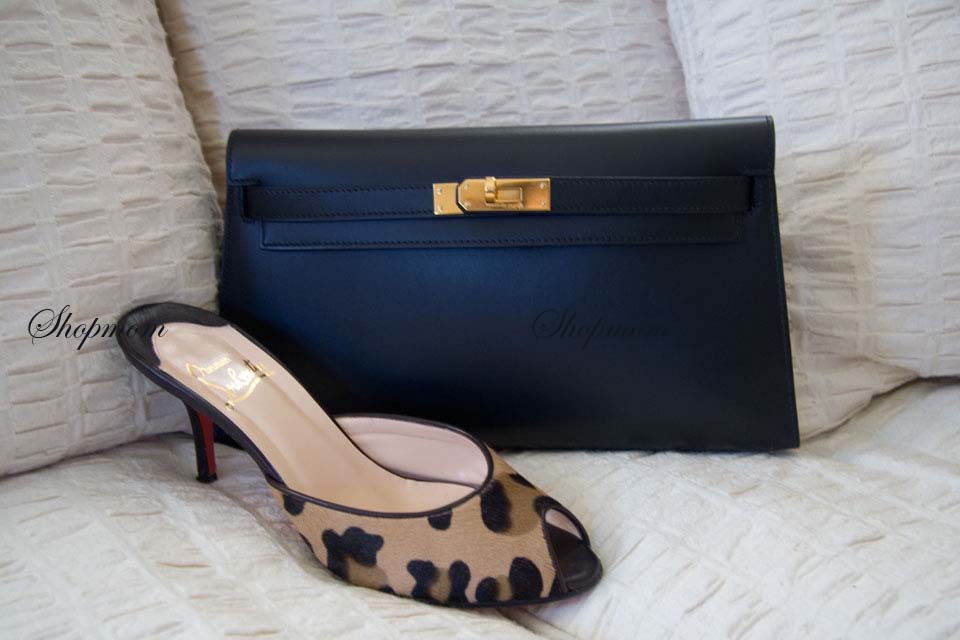 Another rehashed bag design was a feathered version of the Toupet (it’s also similar to the long-discontinued Farming Bag) which had the same vertical-cylindrical shape and top strap, and (with the Toupet), feathers instead of horsehair. 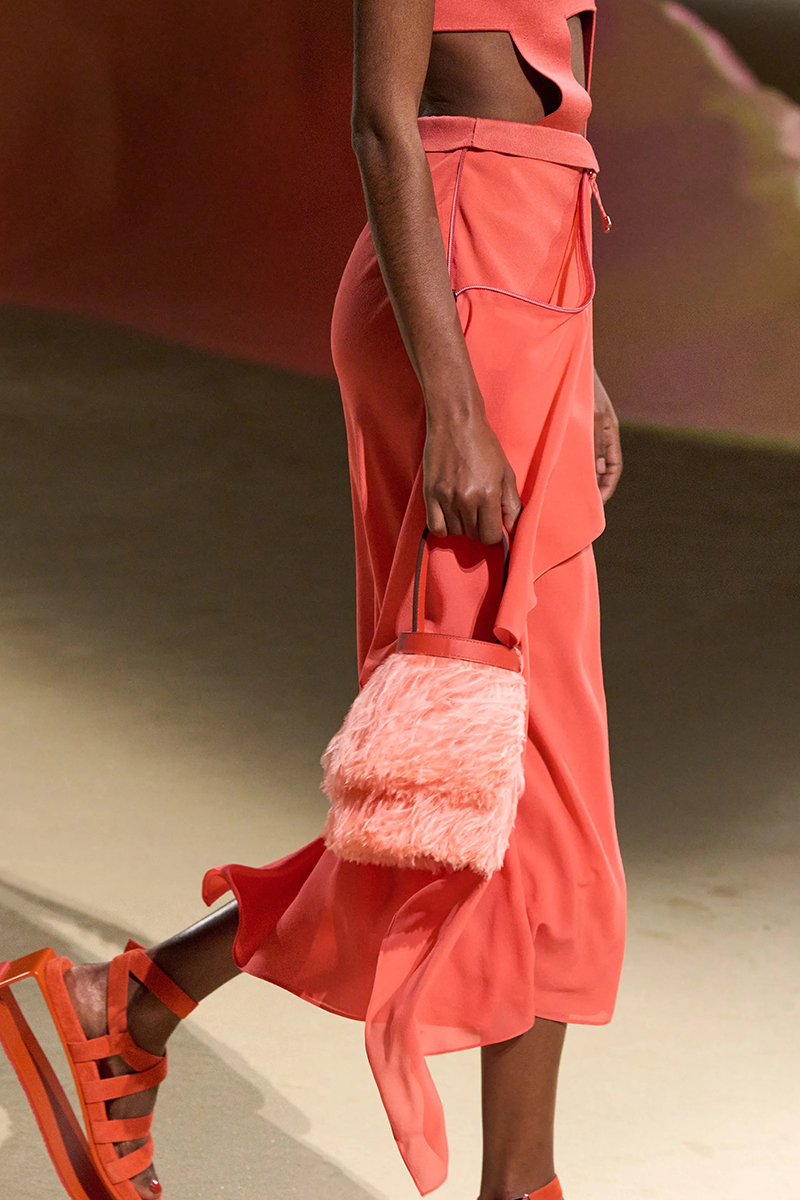 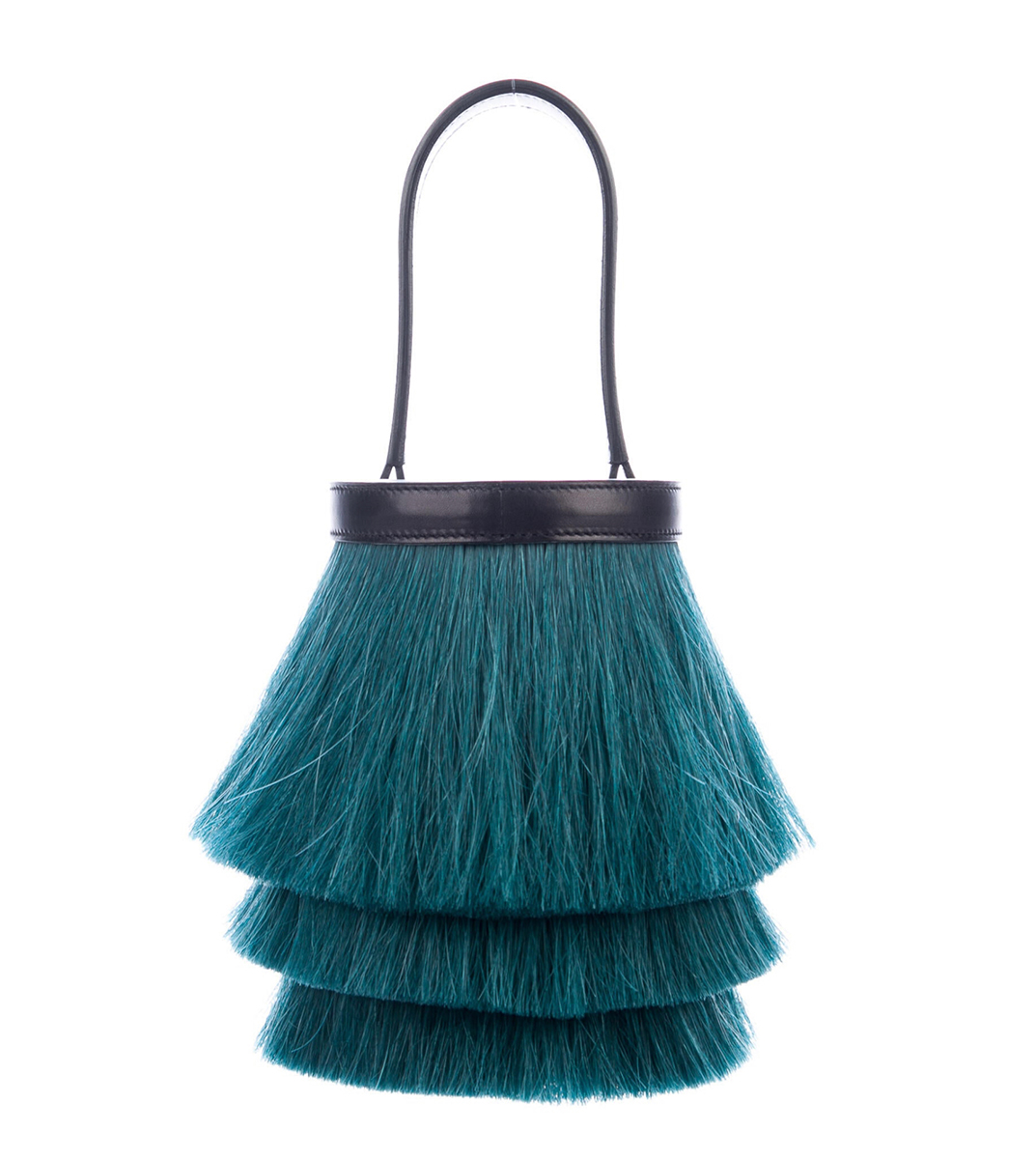 The Gao, a circular, body-hugging, practical, and very chic retired style, returned on the runway with several modern elements, including a front zipper pocket and keyring. 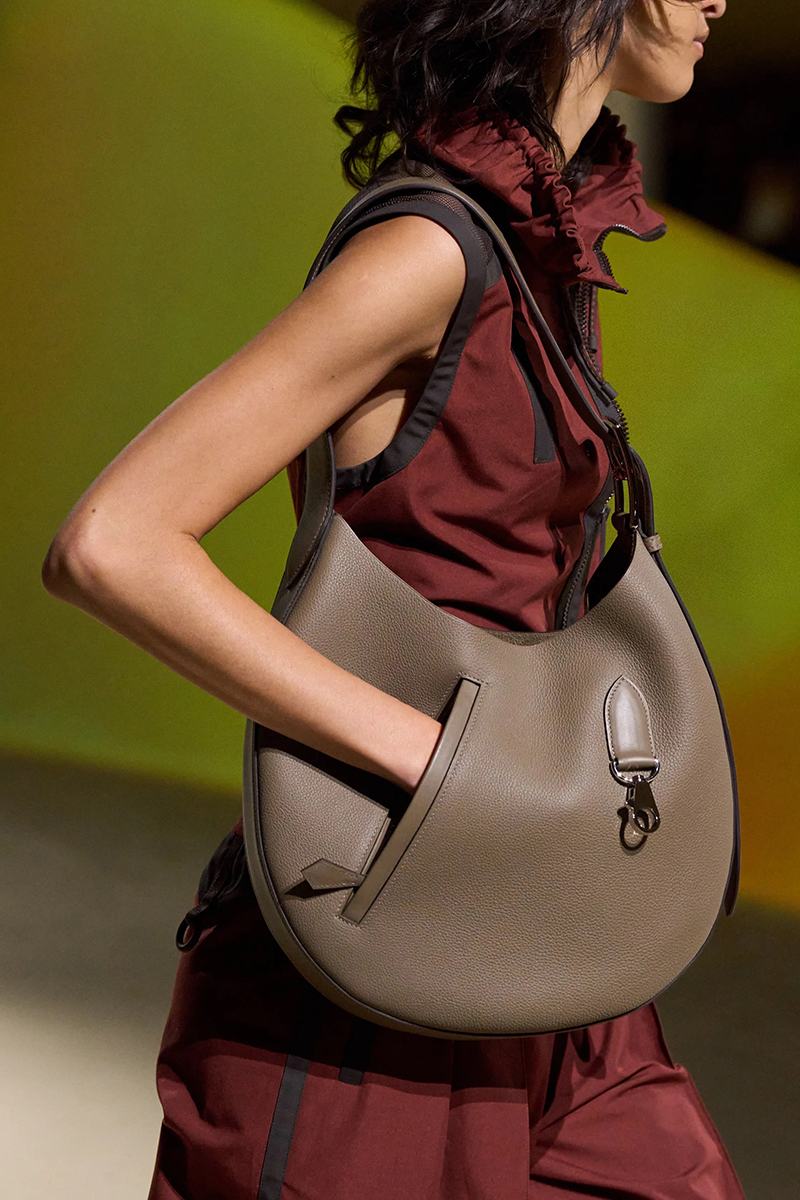 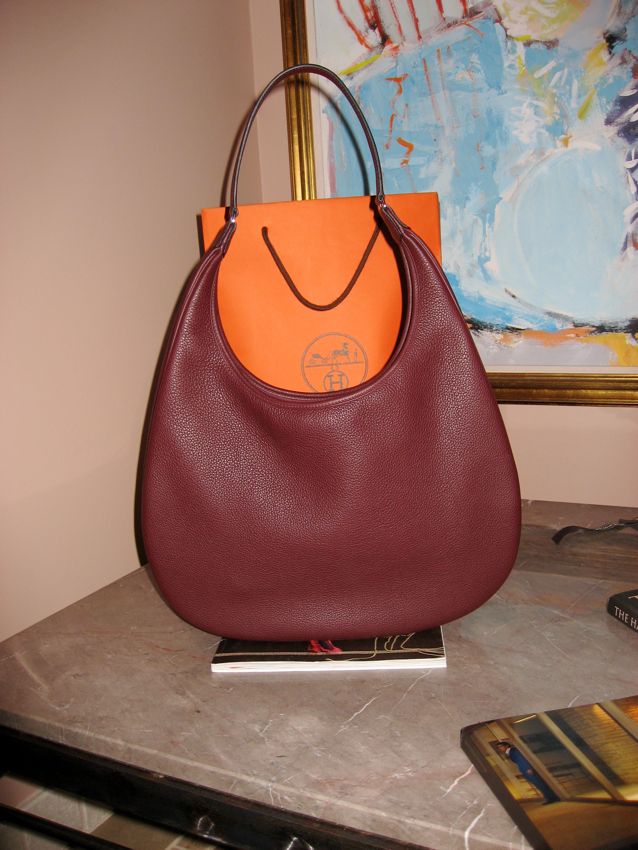 In a set of fresher colors came a very streamlined, enclosed bag with similarities to the Sac Mangeoire (less a few holes), adorned with what appears to be a removable feather tassel. 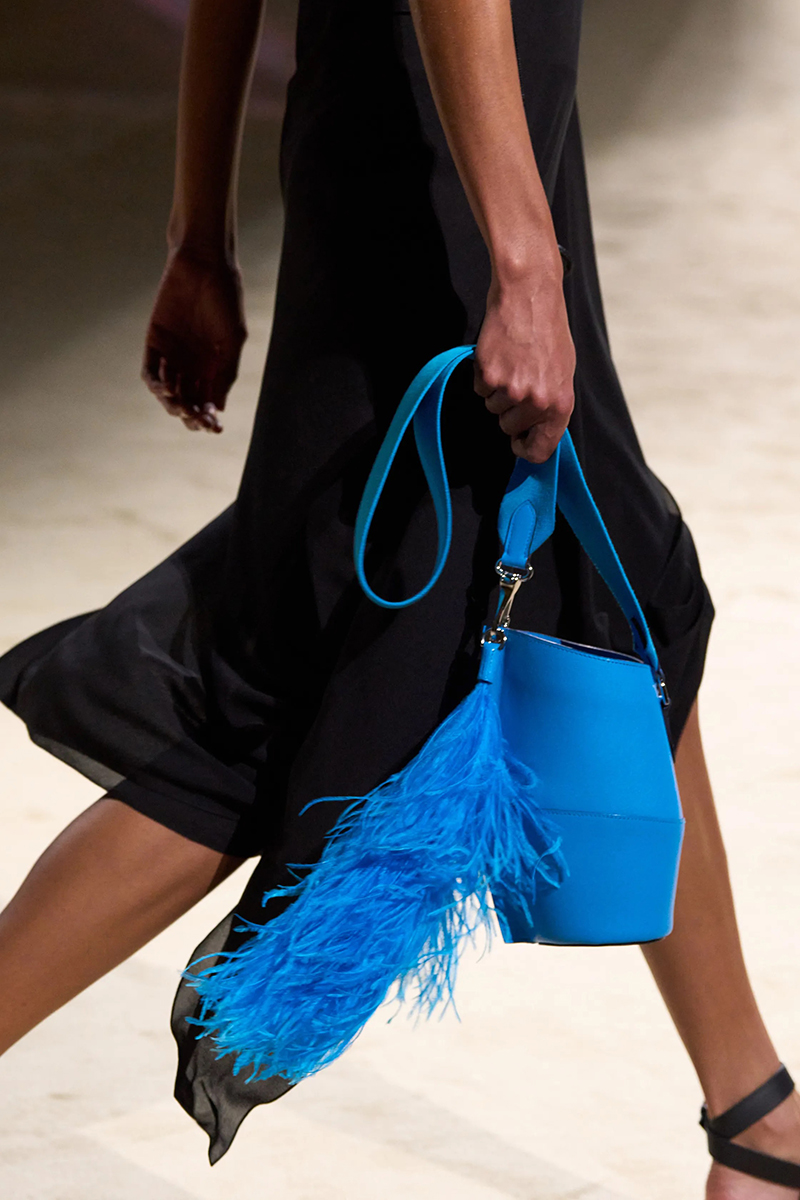 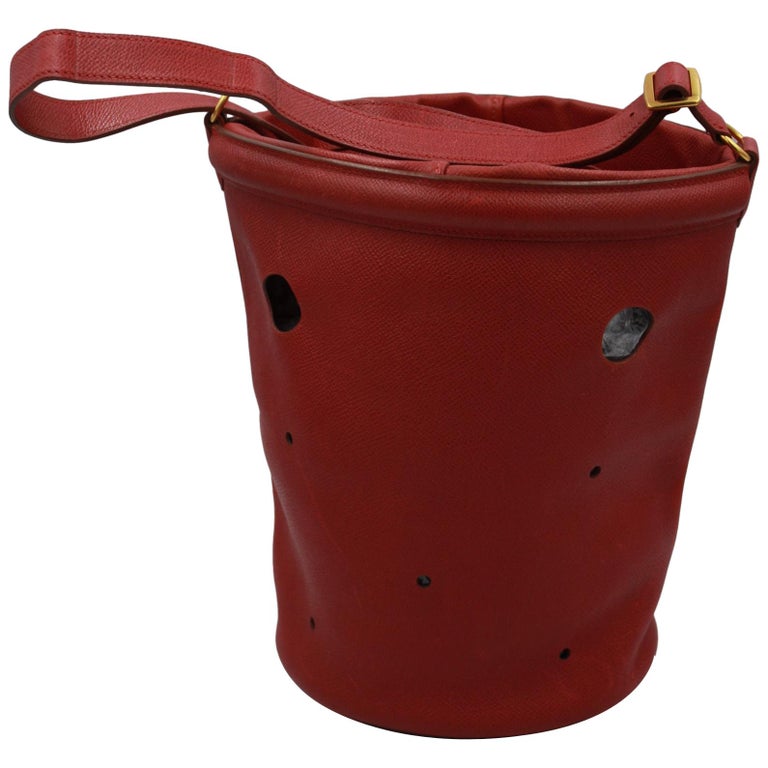 A Vintage Mangeoire, via 1st Dibs

Even at the Post-Show viewings, the bags that (quite literally) shone were reworkings of styles we know and love, including the Kelly Cut, a Clutch-sized version of the Shadow, a Golden Mini Kelly, and a Picnic Birkin. 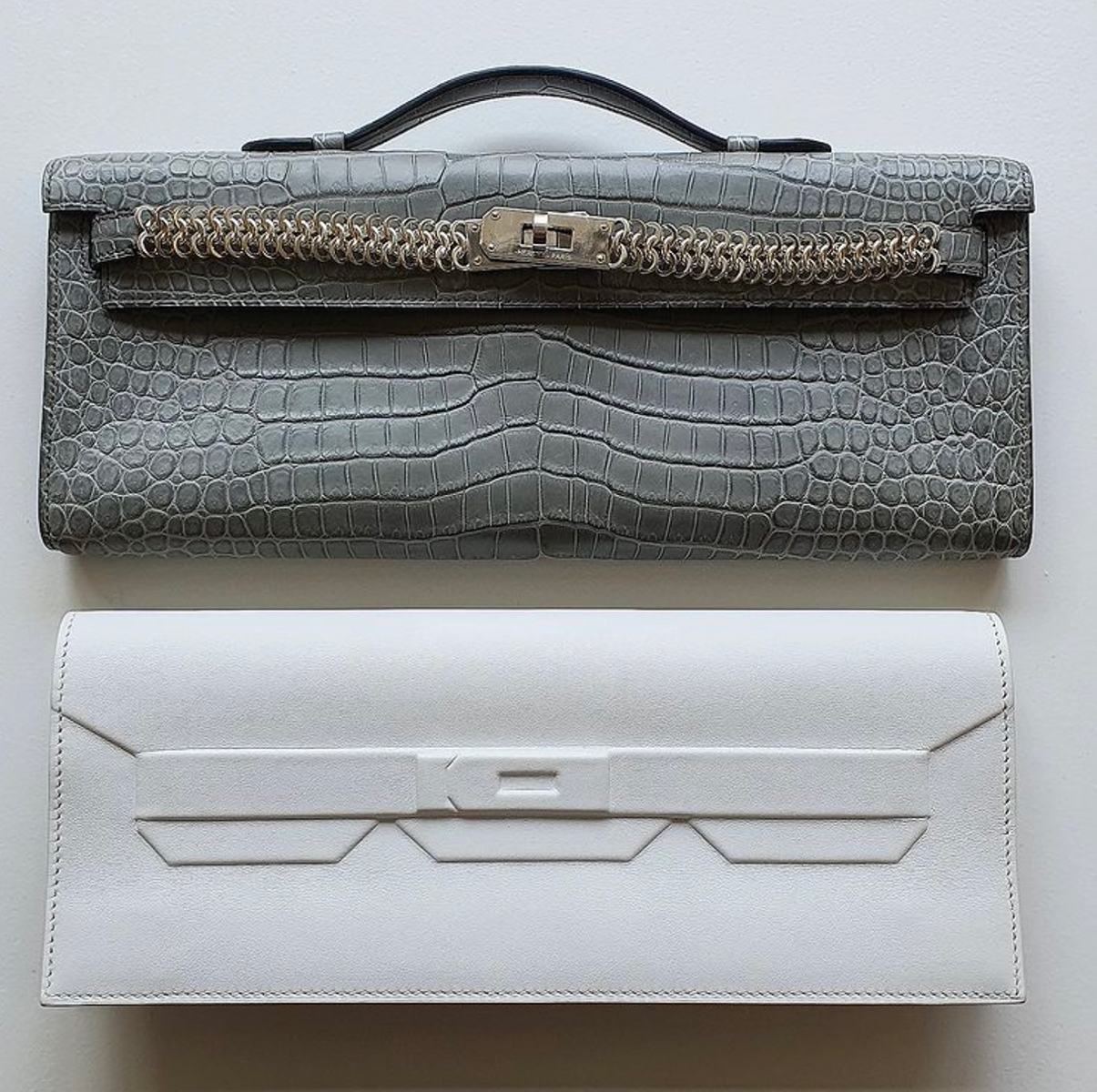 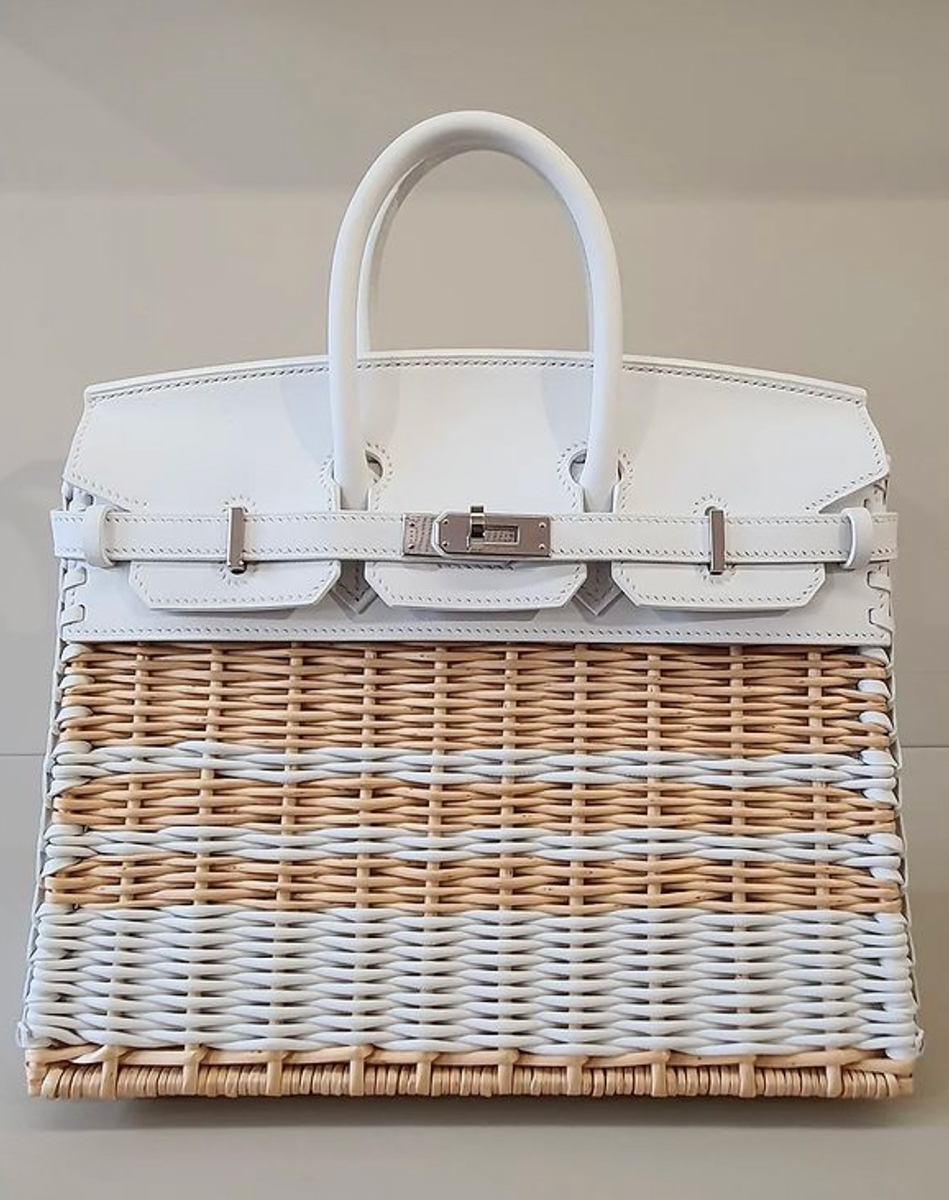 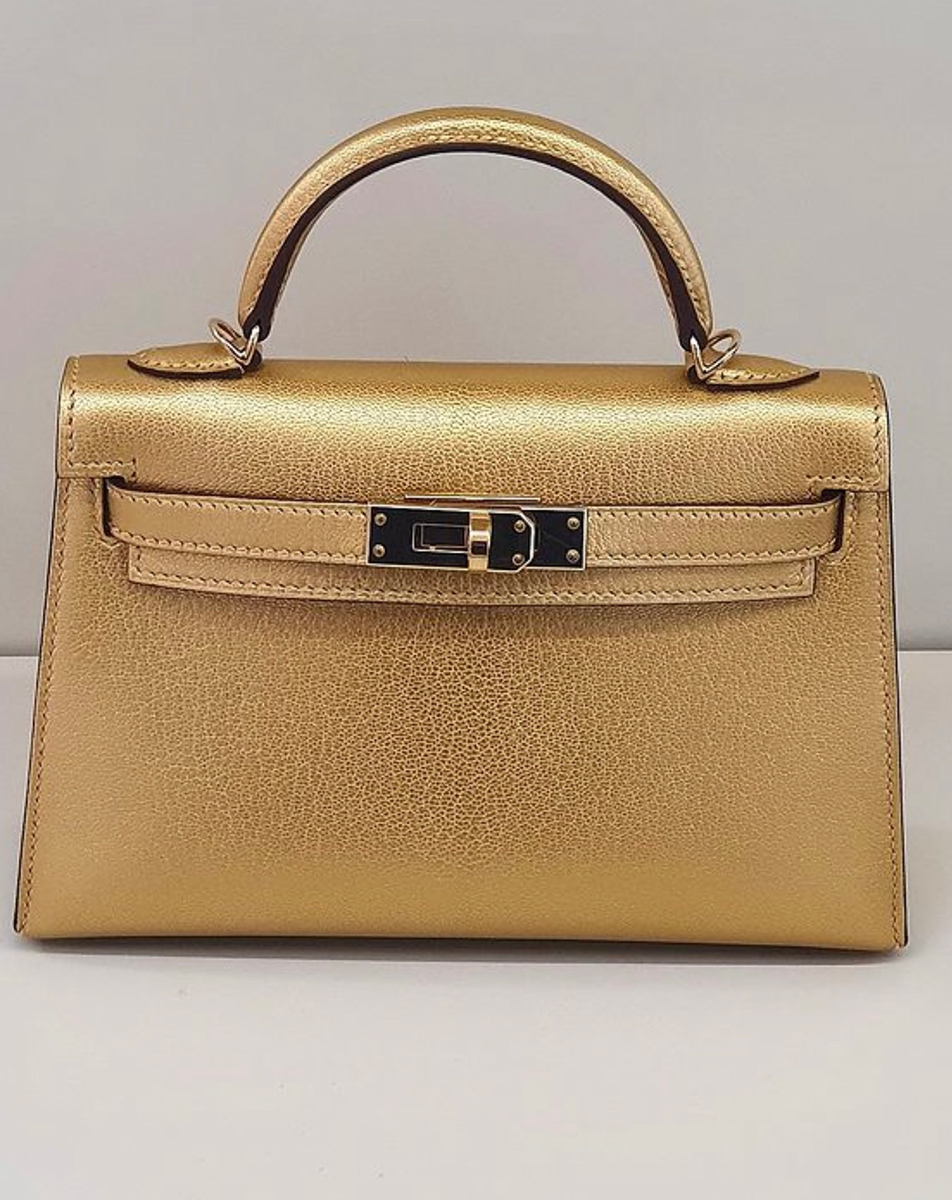 There was indeed one new bag, which does seem to have expanded upon certain design elements of the In-the-Loop SLGs but relieved of some of the more precious trappings of the prior designs while making the transition to a bag in its own right. The new design appears to be a handy and practical size for those on the move, having a long but narrow strap so that it could be held as a clutch, worn on the shoulder (possibly crossbody?), or as a wristlet, with a generous zipper and Clou de Selle detail. 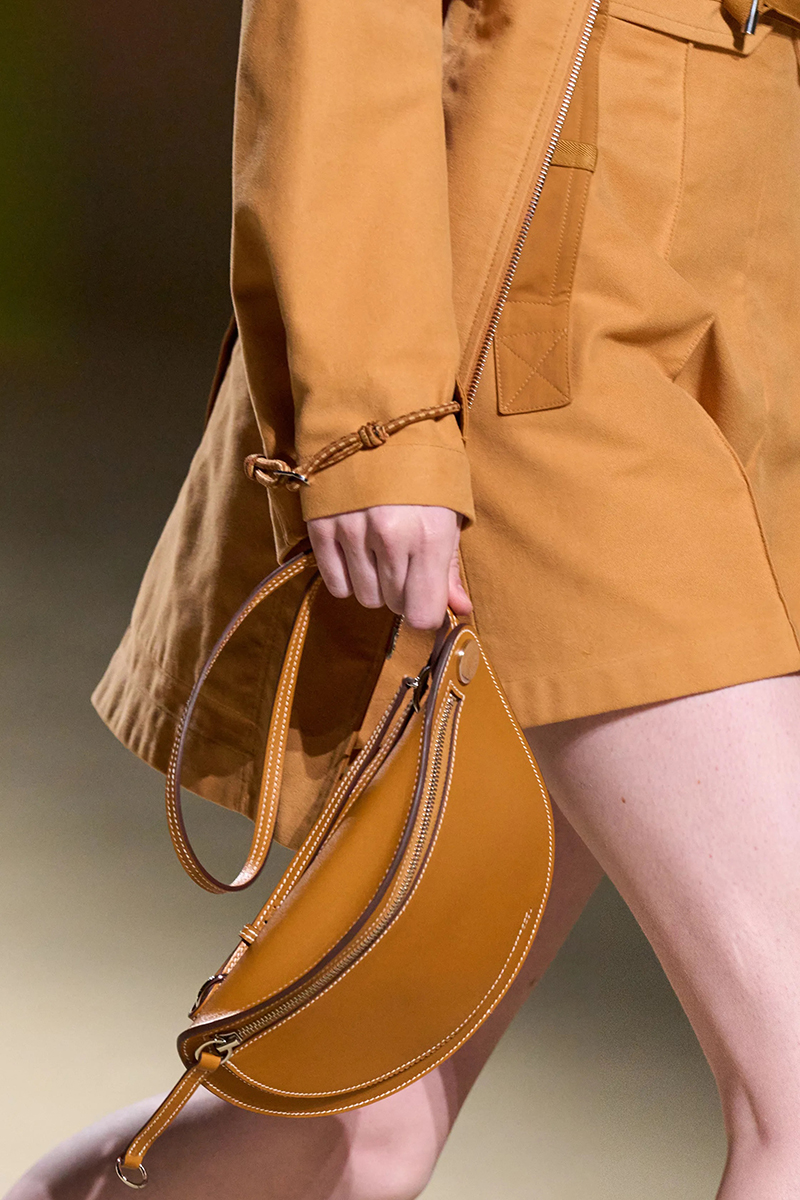 Hermes SS23 Look 5: a new bag for those on the move. Photo via Vogue.com.

The new Gao is gorgeous!

The new Gao bag is perfect!

Ever had any piece of clothing or jewelry with feathers??! We all know feathers disintegrate very quickly…in a few years there will be nothing left of the bag 😬

I assume that the feather version is for the runway only… They’ll probably produce the bag without the feathers.

Tassel Mangeoire reminds me of some of the AI assistants (Alexa? Google?)

Do you mean spying machines people willingly put at the heart of their home? 🤣

SO happy to see the Kelly Elan again! I’m not sure the Farming is discontinued, I saw a Clouté Farming at Madison just yesterday, and I’ve seen some recent Picnic Farmings, too. I would love to find one in Barenia <3