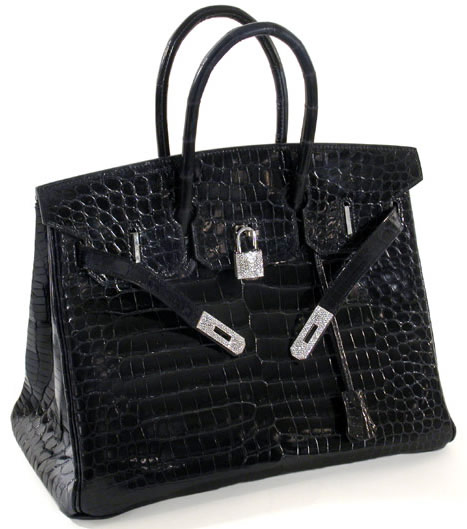 Those behind the Louis Vuitton Tribute Patchwork Bag still have me confused and disgusted, but really annoyed that so many large publications and articles are throwing the “most expensive handbag in the world” title to that atrocious piece of work. That LV junk is at most half the price of a bag that truly deserves some praise, the Hermes Diamond Crocodile Birkin.

The Hermes Diamond Crocodile Birkin is what Maybach is to cars, Schloss Neuschwanstein is to castles, Monaco is to luxurious nightlife, and Purse Blog is to handbag enthusiasts…! Ultra lux croc on a Hermes Birkin is enough to make you beg at a strange SA’s feet, but paired with 14 carats of pave diamonds on the signature Birkin lock and clasp would send me into a continuous groveling state. That sight would not be pretty. Recently Doyle New York auctioned off a Hermes Diamond Croc Birkin which sold for $64,800. That price is reasonable, compared to a $140,000 one-of-a-kind pink crocodile Birkin bag with diamond hardware that was sold in one day’ when the Hermes Palm Beach Store opened in February 2007 (via Palm Beach Daily News).

While a Croc Birkin is one my dream list, the diamond encrusted croc Birkin seems a bit far fetched for me, but is still a masterpiece and the pinnacle of all handbags. To whoever keeps pushing that LV bag as the most expensive in the world, feast your eyes on a bag that makes the LV tag of $45k look like chump change next to $140k.

Limited edition bags, in general, are all atrocious and tacky. They feed women’s inner desire for everything cute that they fancy as chic. I do love the birkin, but the diamonds and croc skin are too much.

I can’t disagree that the patchwork bag is much worse, though!

This back is sooo hot I would rock it!!!

I’m agree that the LV bag is really disgusting…still wondering whether there is anybody will be so idiot to buy that stupid bag. I love birkin, but not a croc birkin…anything in croc skin is not pretty to me… 😛

we have no money to but this kind of bag

i think LV and hermes are both cute….they have they own taste…its just about choice!! just dont compare them!!!

I read that Eva Longoria had the hot pink Birkin

Hi I am trying to find out the years with the letters in Hermes handbags.
My friend inherited a whole collection from her grandmother and we don’t know what each year the letter stand for I would appreciate your help the letters are Y–P–I–K–J–L–T–E–O–X–F–B–R. She may be selling them soon if anyone wants to know. I will let you know when she is ready just e-mail me if you would like to buy. Right now she is holding on to them because of her grandmother was her best friend.
Thank You