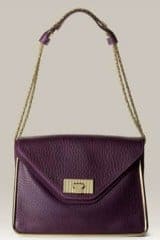 I saw the Chloe Sally Flap Bag yesterday at Saks in Atlanta and thought to myself that I’d really like to be able to write about it, but it’d probably be a while before I saw it online. I check all of my favorite sites for new bags basically every day, and it hadn’t appeared on any of them even for a moment, so I figured that all was lost. Sometimes bags don’t make it to the internet, and sometimes if they do, it’s so woefully late that there’s not much of a point in writing about them. So I was delighted when I got home from the mall and found that the bag had suddenly become available for presale at Nordstrom (who has really stepped up their game recently when it comes to designer bags, in my humble opinion). In person, the bag is deceptively simple: it looks like a normal, medium-sized flap bag at first, but I found myself impressed at how clean and precise its lines were. The pebbled leather also makes it a more casual option than a Chanel flap while still being some of the most beautiful textured leather I’ve seen in while; it’s sturdy but soft at the same time. From the front, it also looks much smaller than it is – at the bottom, it is a good bit deeper than a similar Chanel. The strap is long but not nearly long enough to be a crossbody bag, and the overall effect is tailored and polished, just like it should be to be a part of the “flap bag” trend that is gaining steam. This bag and those like it appear to be a pointed response to the needlessly huge bags of seasons past, and they’re making a very good argument for themselves. Pre-order through Nordstrom for $1995.