Chrissy Teigen is The Row’s Biggest Celebrity Fan (Well, Other than Mary Kate and Ashley) 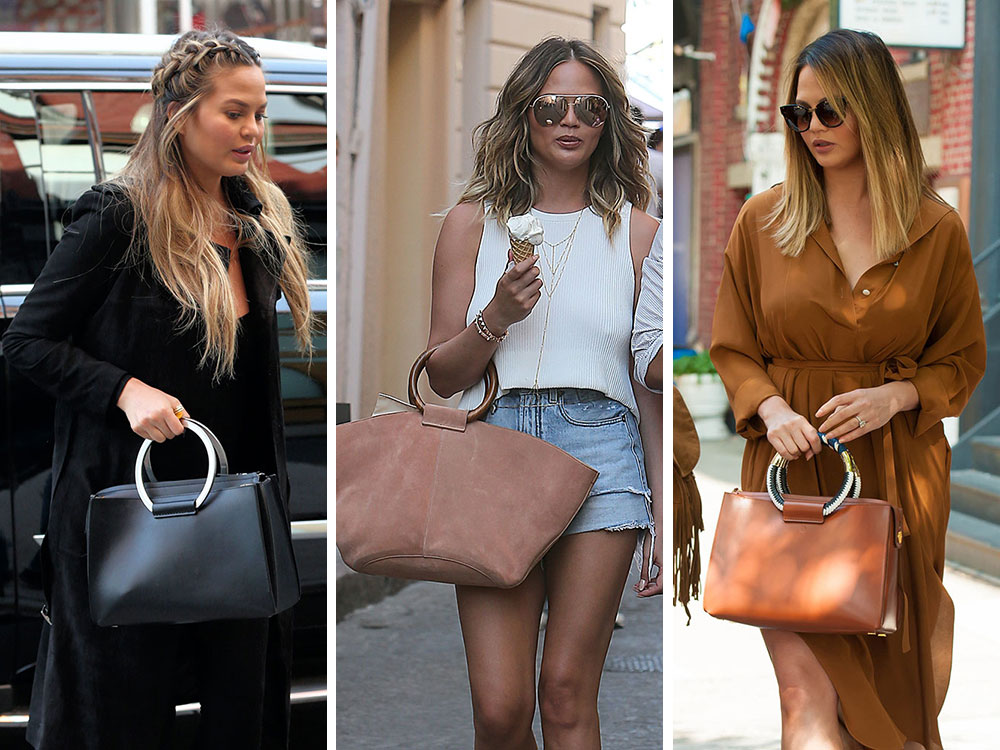 Our fearless leader Chrissy Teigen owns an immaculate assortment of designer handbags (which you can peruse at your leisure in The Many Bags of Chrissy Teigen). But, of course, that's not the headline here. Today, we must bring your attention to her unrivaled collection of The Row bags. No other celeb (Olsens excluded, obviously) lays claim to so many different The Row styles. Here's a sampling of some of our favorites, and if you'd like a more 360-degree view of some of these outfits, we penned a special ode to Chrissy's strappy sandal game this summer.

We'll start with one of her faves from earlier in the year: The Row Classic Tote. Chrissy owns a few different versions of this one. Take special note of those flat silver handles. 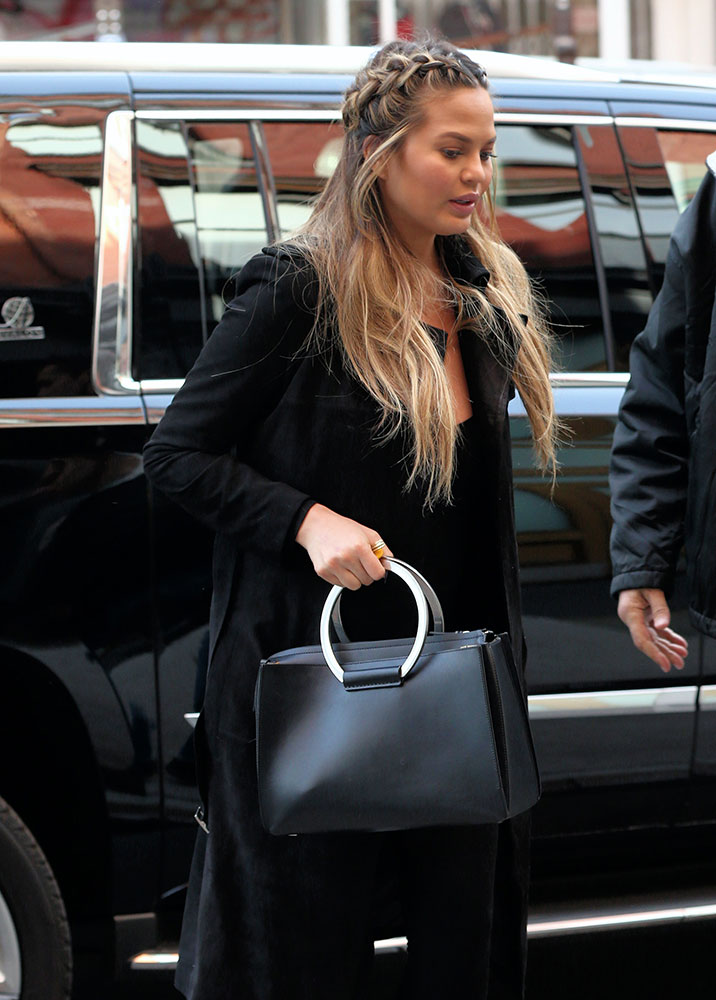 Here's Chrissy leaving her Soho apartment with a completely different Classic Tote, which I greatly prefer to the previous one. The stylized handles really up the ante, and the leather looks far more supple here, for some reason. Maybe I'm swayed by the perfect fashion magic of the outfit itself. 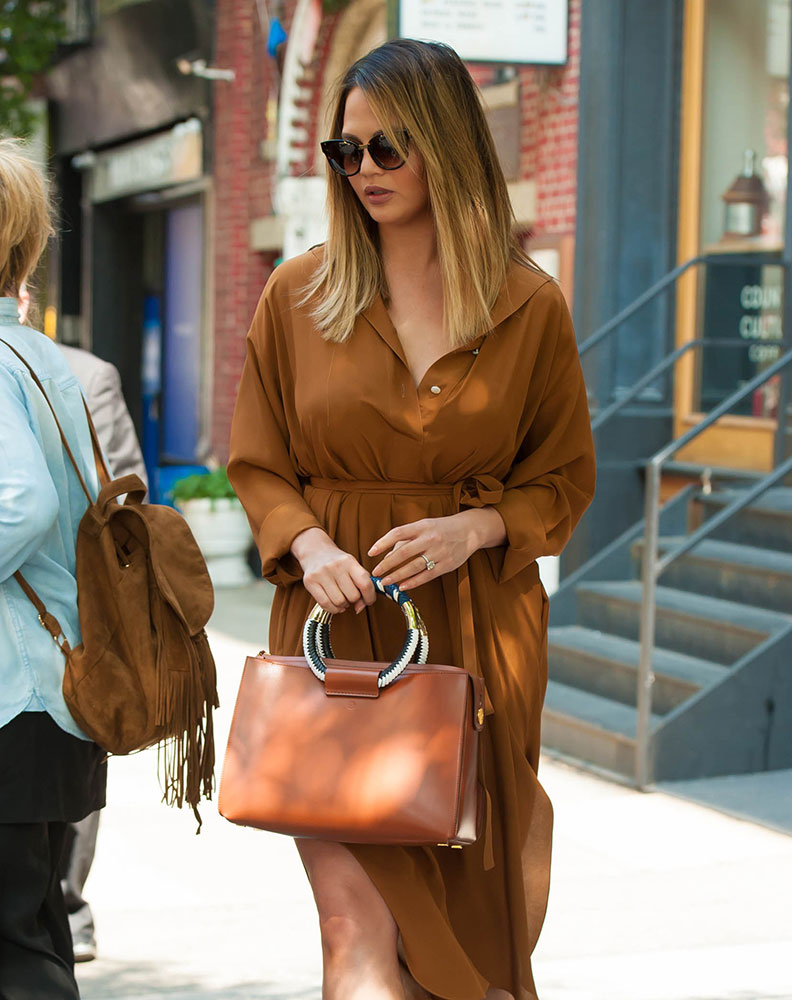 Here she is once again, out and about some time in August with John and Luna and her fave Classic Tote in Soho. Chrissy also has a black version of the Classic Tote with brown wooden handles, which (rather mysteriously) does not appear in this post. 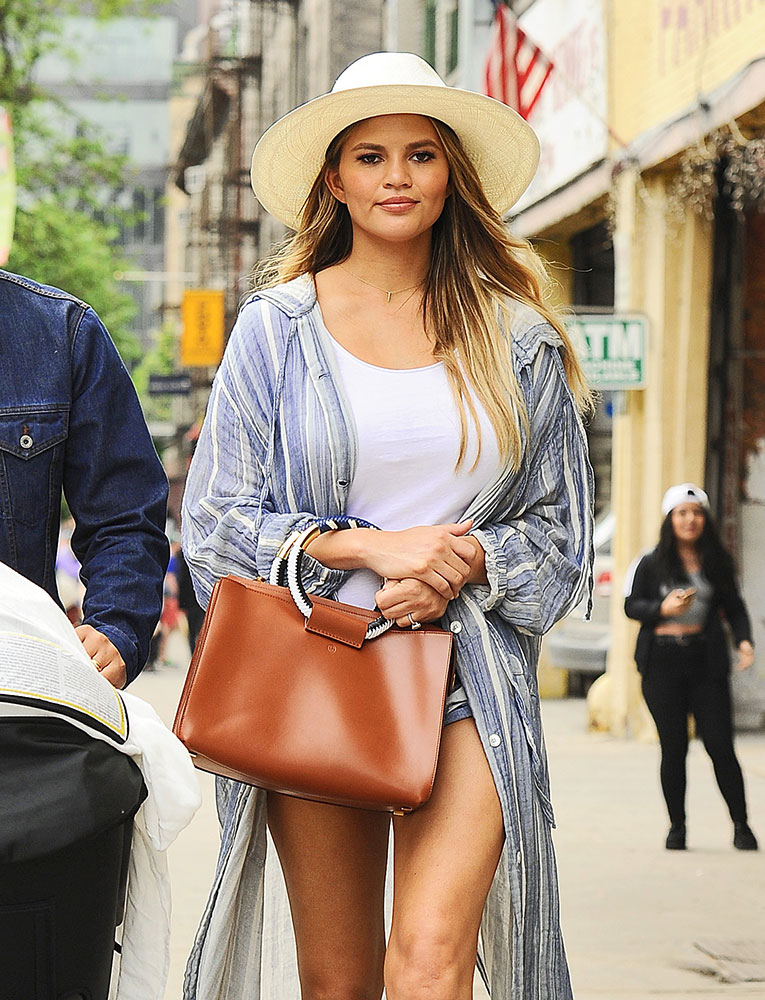 This vintage-looking black suede The Row Frame Clutch is a much more recent acquisition; we just saw her carry it for the first time last month. 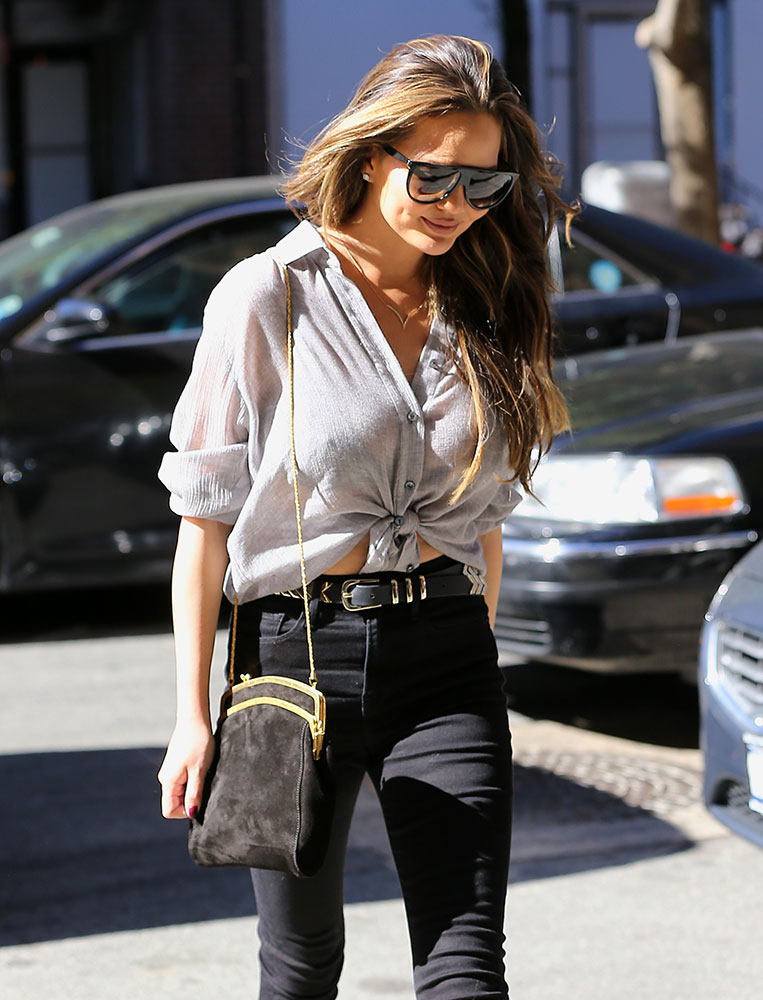 It made another appearance outside of Bel Bambini in West Hollywood, where Chrissy and Luna were doing a little shopping. I'm fairly certain this is the same bag, though it looks more velvet than suede in this pic. 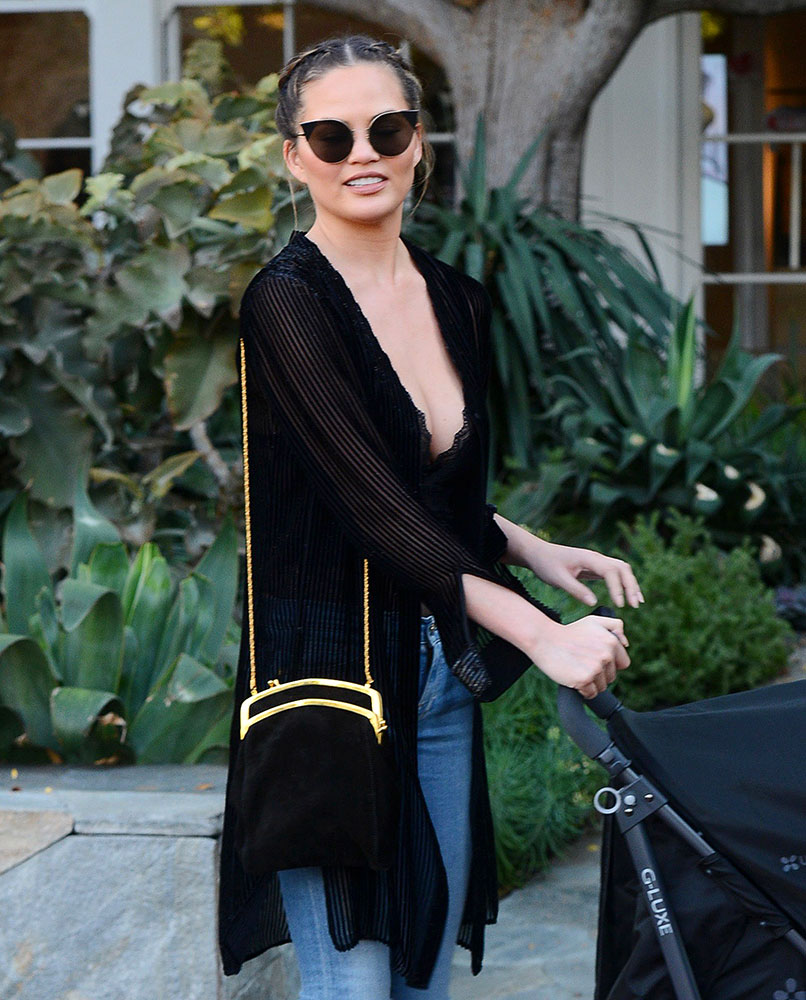 Were you wondering which The Row handbag is on Chrissy's arm at this exact moment in time? Odds are it's this tasseled The Row Hunting Bag, which she was seen carrying at LAX earlier this week. 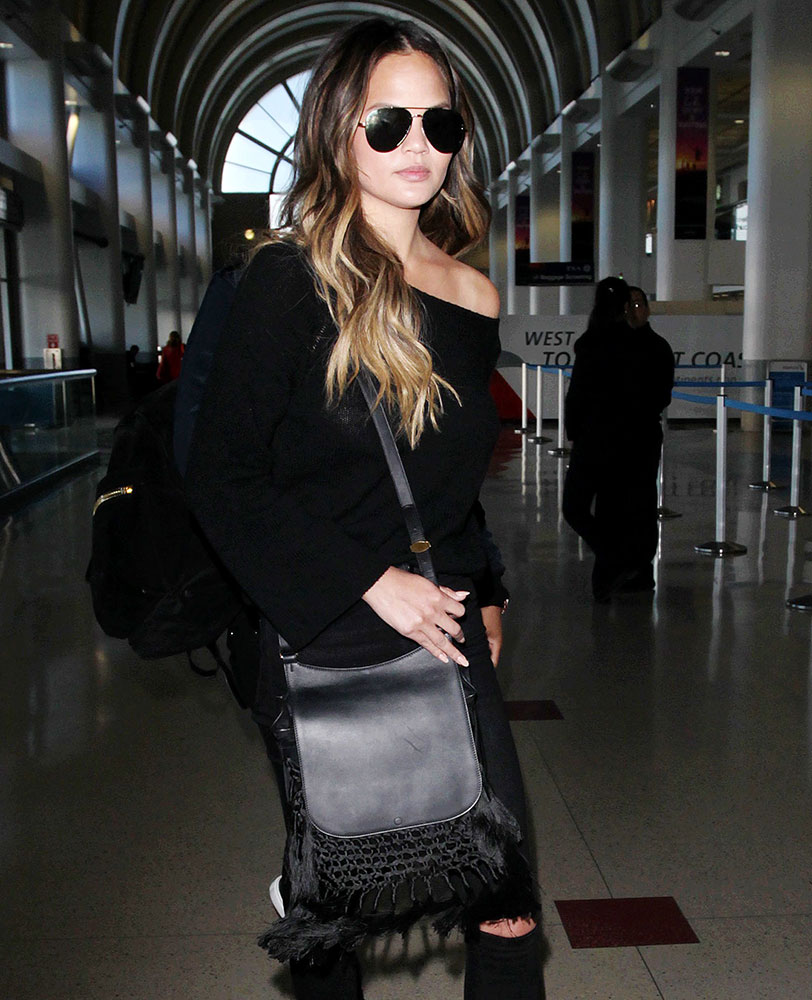 Here's another The Row-Chrissy Teigen TBT. Let's all reminisce about the time Chrissy and the fam vacationed in gorgeous St. Tropez last August. In my mind, Chrissy is carrying this oversized The Row Market Tote and eating this ice cream cone in St. Tropez in perpetuity. 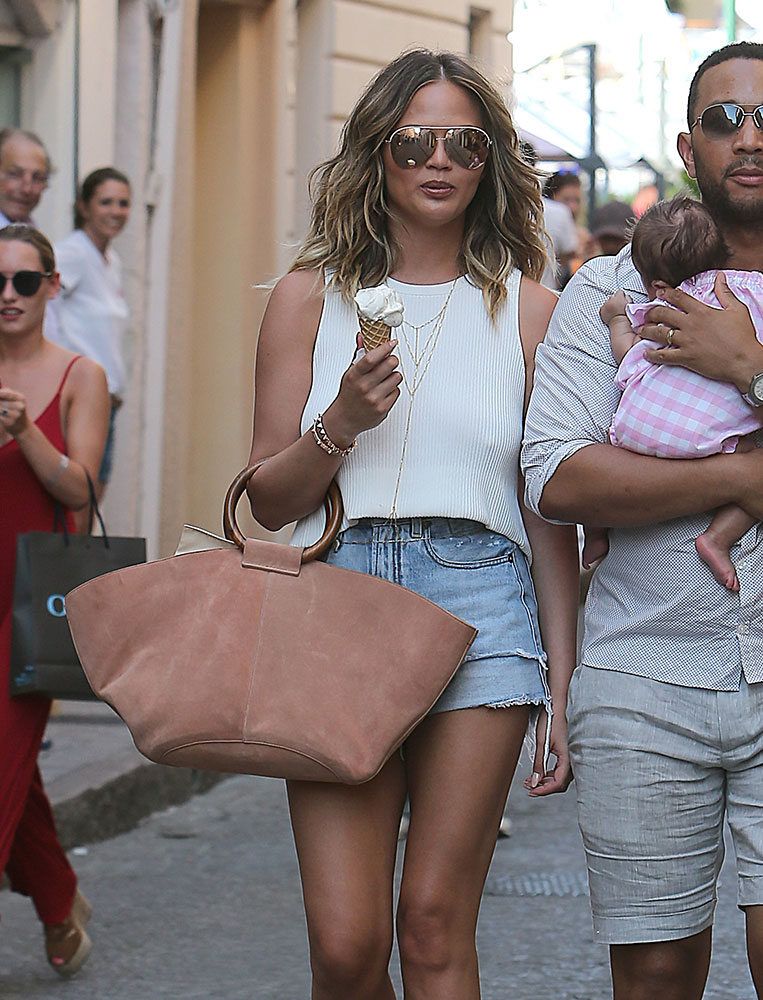 Finally, let us all marvel at Chrissy's ability to perfectly match the hue of her blush/bronzer with the color of this dainty The Row Suede Tassel Wristlet. You continue to inspire us, Chrissy. Teigen 2020! 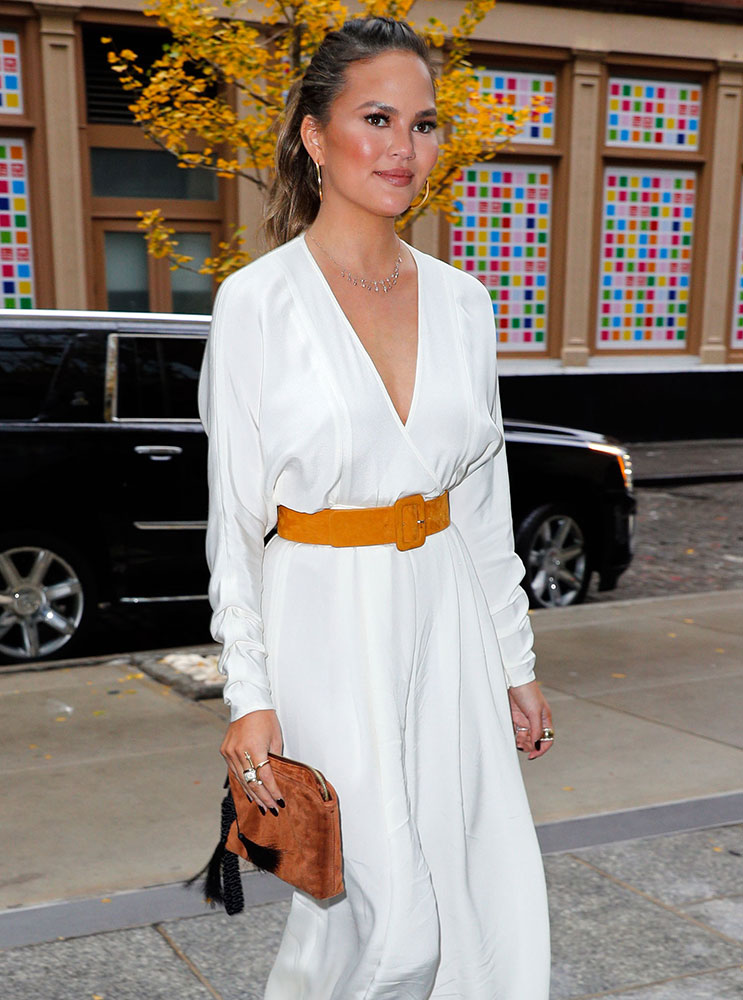