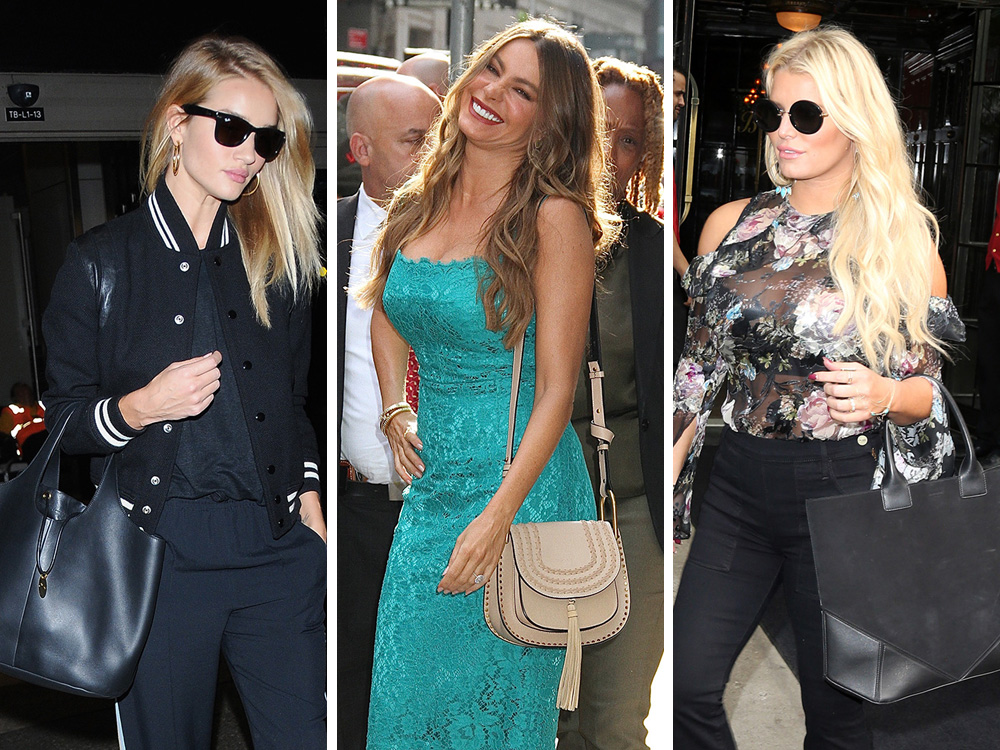 Autumn is officially upon us, and most celebs have already retired their favorite summer styles. Instead, their latest bag picks are velvet Miu Mius, suede Givenchy bags and other classic fall standbys. Some celebs are even mixing it up with a little white after Labor Day. Luscious textures and layers are plentiful right now, and we can't be more than a week or two out from knee-high boots. 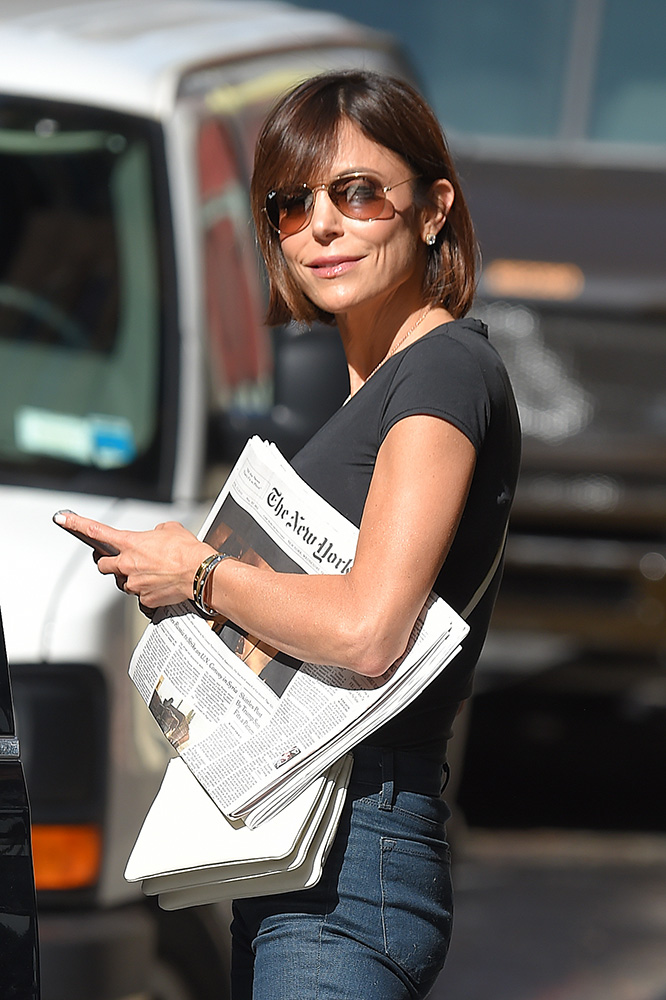 Gisele Bundchen recently attended the a screening of the season premiere of National Geographic's Year of Living Dangerously at the American Museum of Natural History with Tom Brady. She brought along her an exotic black leather Chanel Wallet on Chain Bag for the occasion. 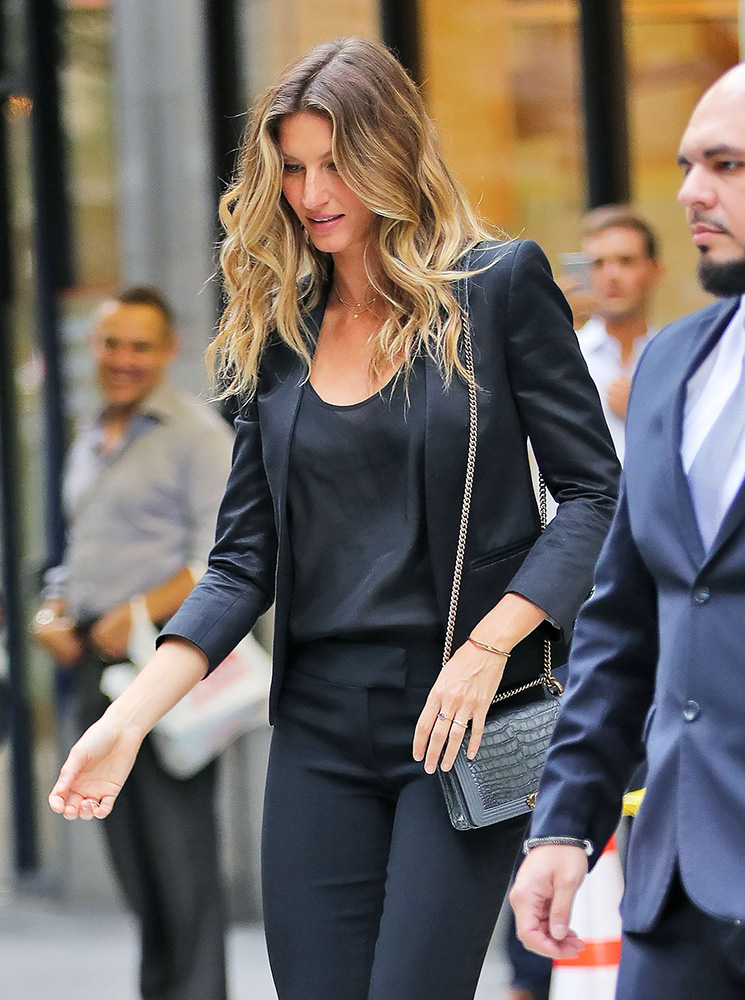 Jessica Biel showed off her Louis Vuitton Cindy Sherman Camera Messenger Bag while doing a little shopping in LA. This design came from the Icons and Iconoclasts Collaboration the brand unveiled back in 2014. 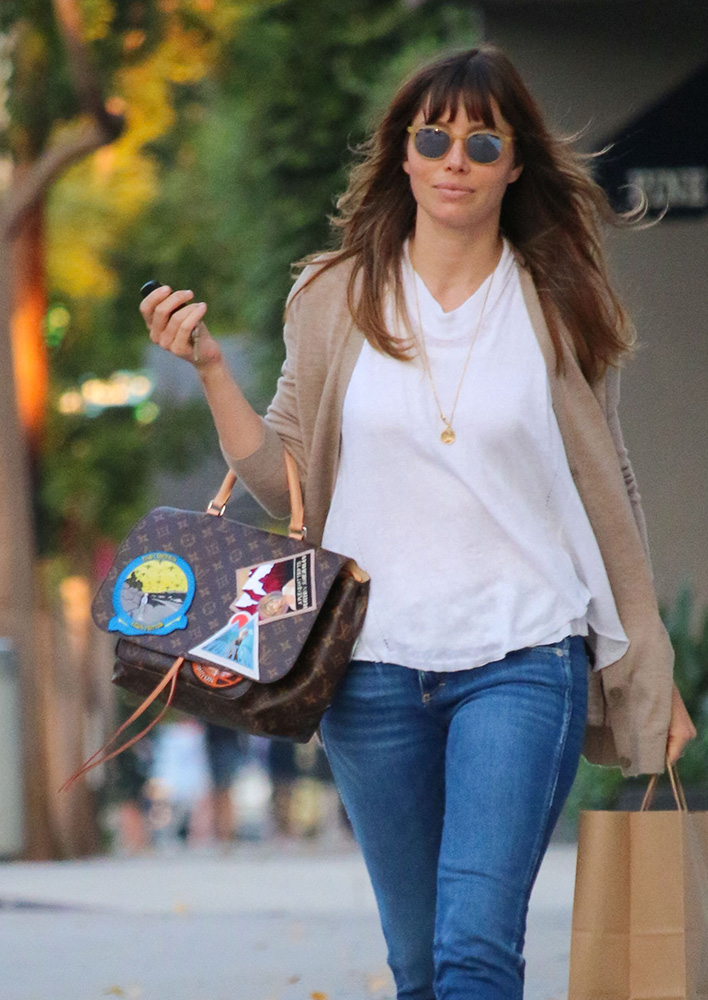 Here's Jessica Simpson, leaving her NYC hotel with a black suede and leather Givenchy Easy Tote. This style is no longer produced, but when it was in stores, it wasn't a Givenchy style we saw celebs favor too often. Was it because of its sub-$1,000 price tag? 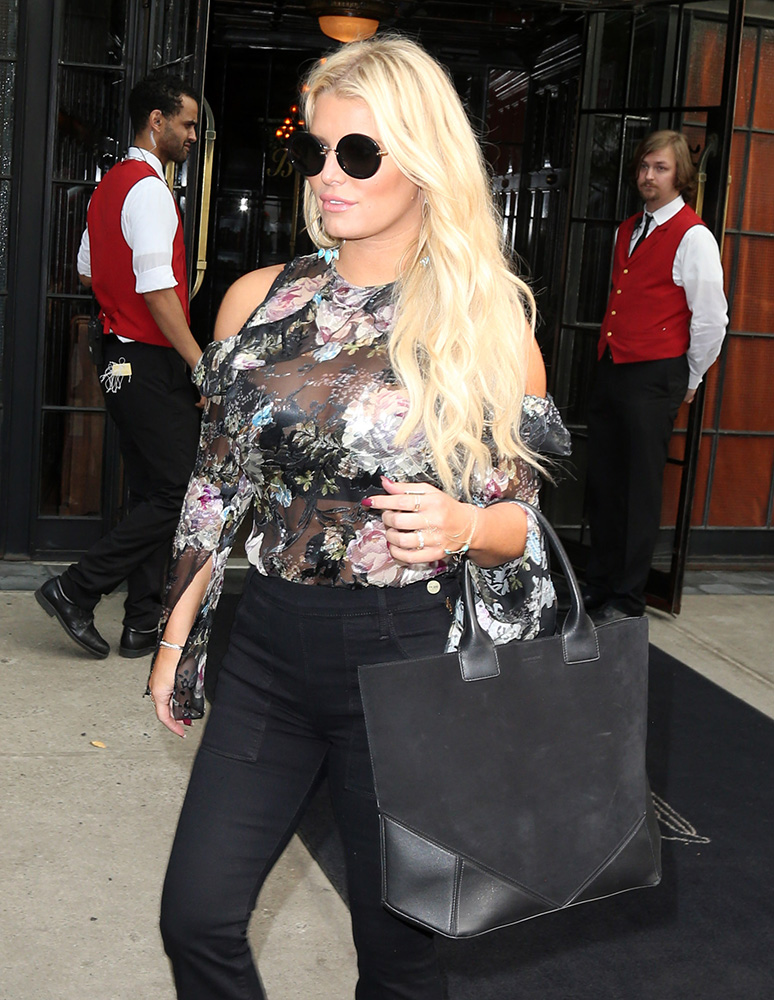 Paps caught Lupita Nyong'o heading into an appearance on Kimmel with this muted blue version of the ZAC Zac Posen Eartha Top Handle Bag. Not only is this style sub-$1,000, it's sub-$500. 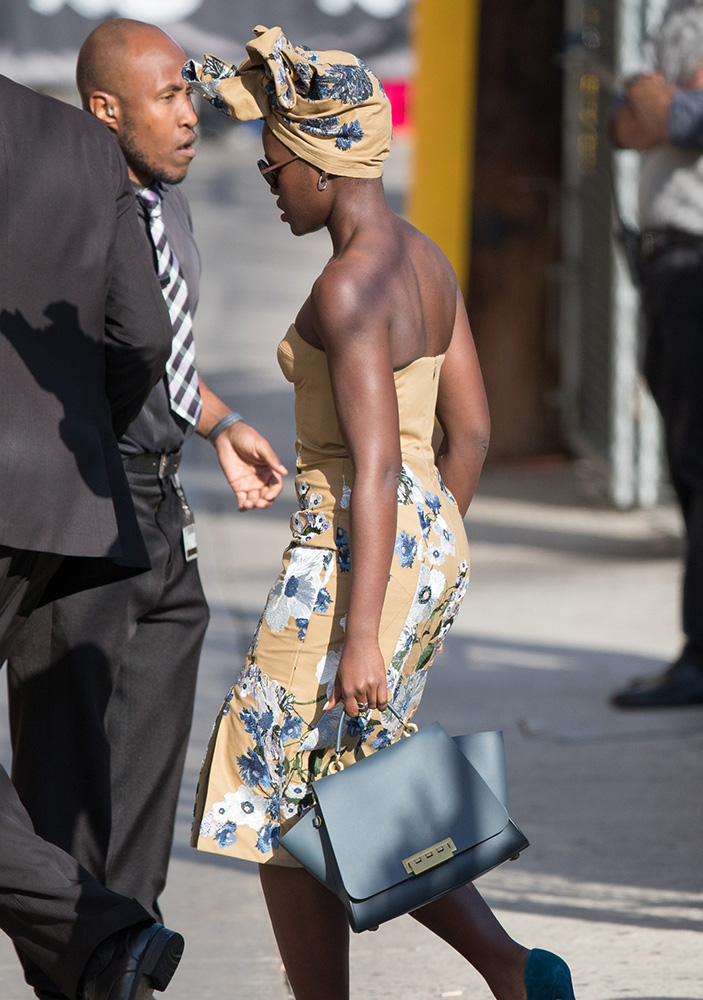 Spread the word: velvet is going to be everywhere this fall. Bags. Shoes. Cocktail dresses. Case in point: Reese Witherspoon is carrying this beautiful red velvet bag from Miu Miu into a skincare spa in LA. 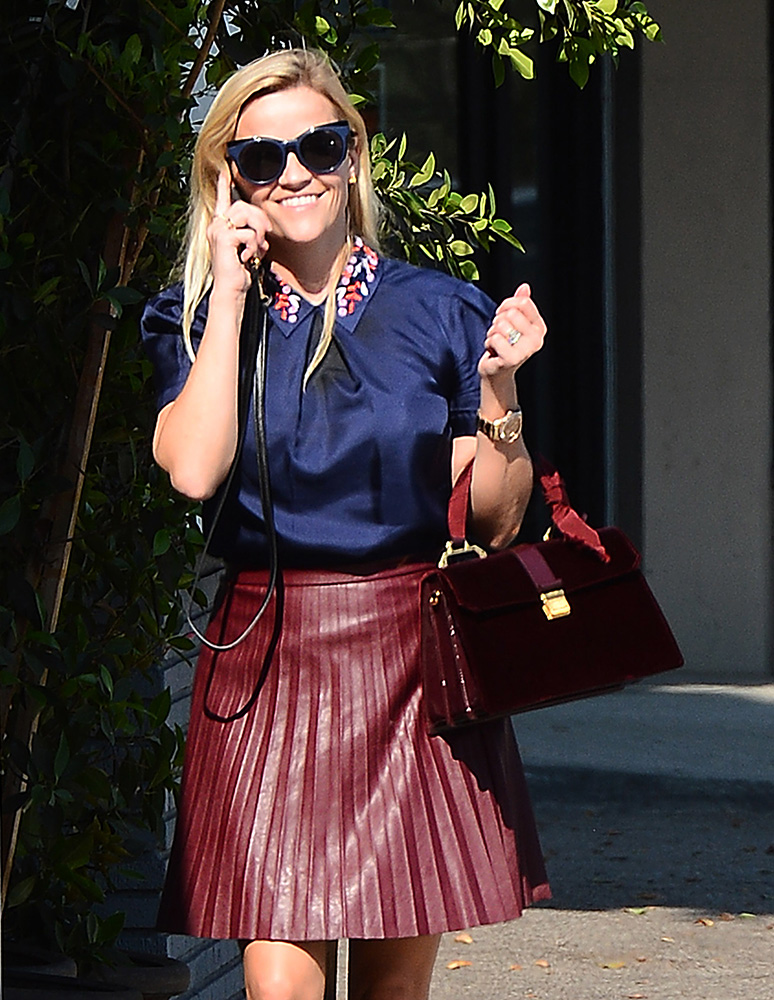 Rosie Huntington-Whiteley has probably never looked so low-key before in her life. She's seen here carrying a Hermès Picotin Bag outside of LAX, which blends perfectly with her monochromatic ensemble. 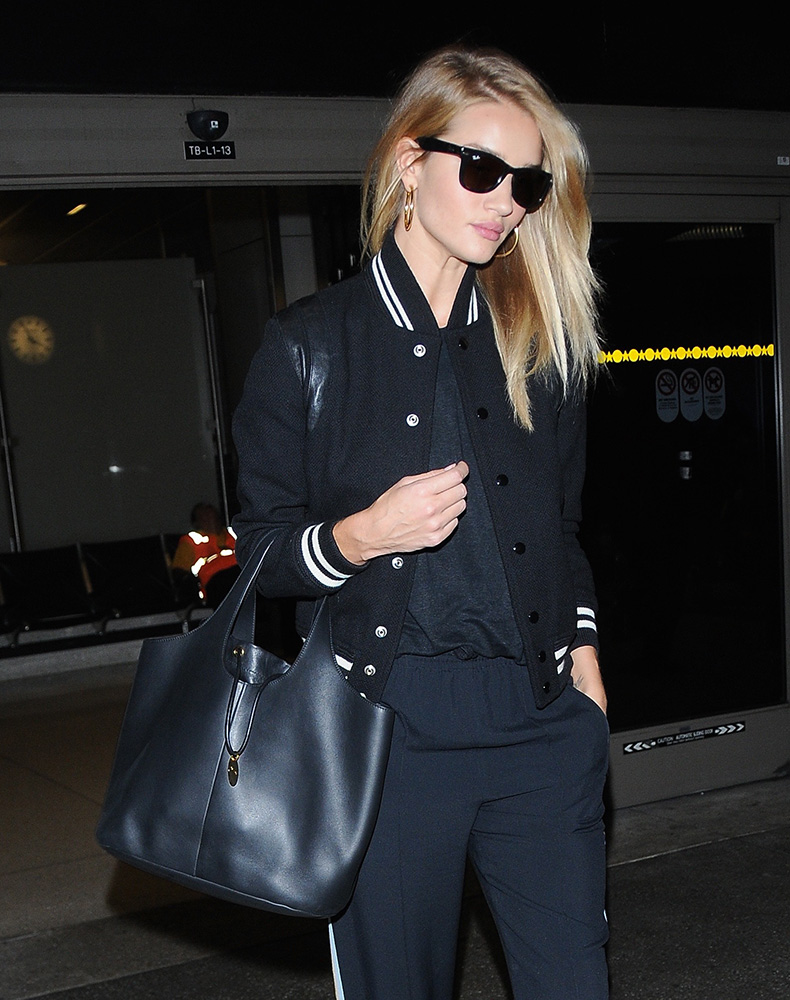 Sofia Vergara has really been favoring this neutral leather Chloé Hudson Bag. I know because I noticed she carried it several times while I was putting together this post about her designer shoes. 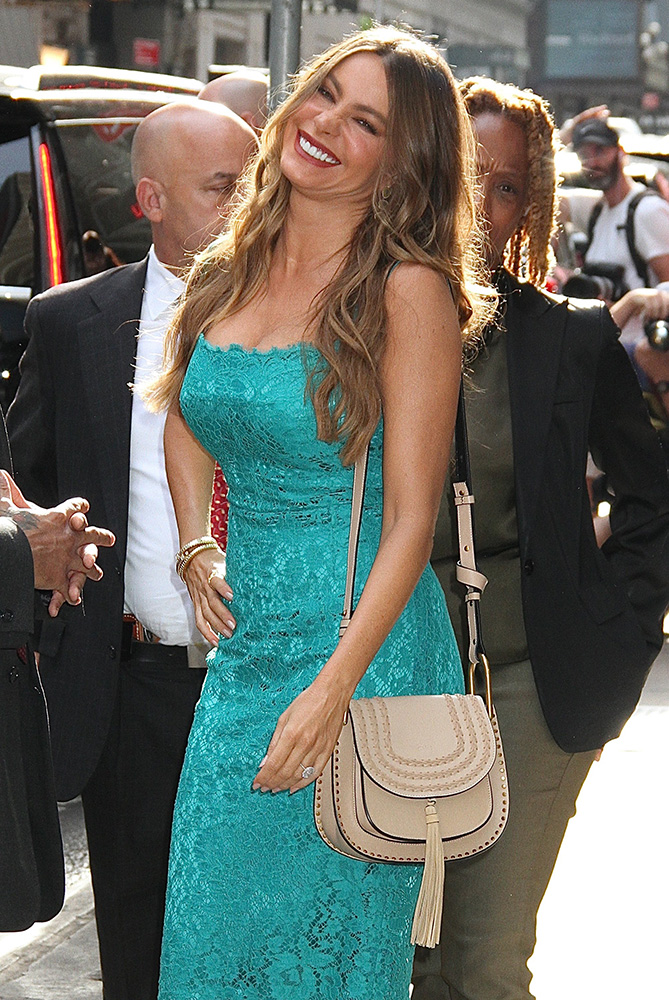