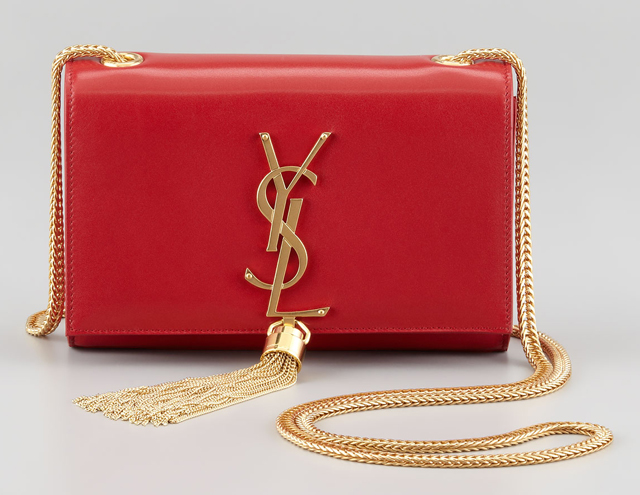 To me, the Saint Laurent Cassandre Small Tassel Crossbody Bag felt pretty aggressive at first – considering all the branding kerfuffle that the company has gone through since the advent of Hedi Slimane, emblazoning the company’s old (but still used, sometimes, in particular instances, especially for cosmetics) logo in bright gold metal on the front of a rather small bag seems like a direct call-out to critics of the switch. And then I remember that it’s Slimane calling the shots now, so of course this bag as aggressive. Hanging a big tassel from the thing that best symbolizes the history people say you’re throwing away is about as big of a middle finger as a handbag can be.

For once, though, I feel like Hedi Slimane’s sense of humor, if he actually has one, can be felt in this bag. His critics, including me, have been hounding him since his first collection walked, and he seems more resolved than ever to do exactly as he pleases. I can respect that clarity of intent, even if I don’t respect most of the clothes and accessories he’s put out so far or the way he’s handled the pressure he’s been under. I also don’t particularly like this bag, for what it’s worth – the proportion of the logo, the bag and the tassel don’t work – but it did make me smirk, and at this point, that feels like it might be worth something. Also, it’s a pretty neat trick to get big department stores to sell your attempt to tell your critics to go shove it.

Buy through Neiman Marcus for $1,590 in three colors.

I haven’t bought a YSL product since Hedi Slimane is on board. I don’t care that much for the rebranding but i find the products boring.

I don’t think i’m going to buy a Saint Laurent Paris item ever. They just don’t have any identity and i find this bag aggressive, yes, but in a bad way

Imagine this bag without the YSL it would be just boring but with it has personality. YSL forever!

they should just admit that they made a mistake and go back to the YSL brand.