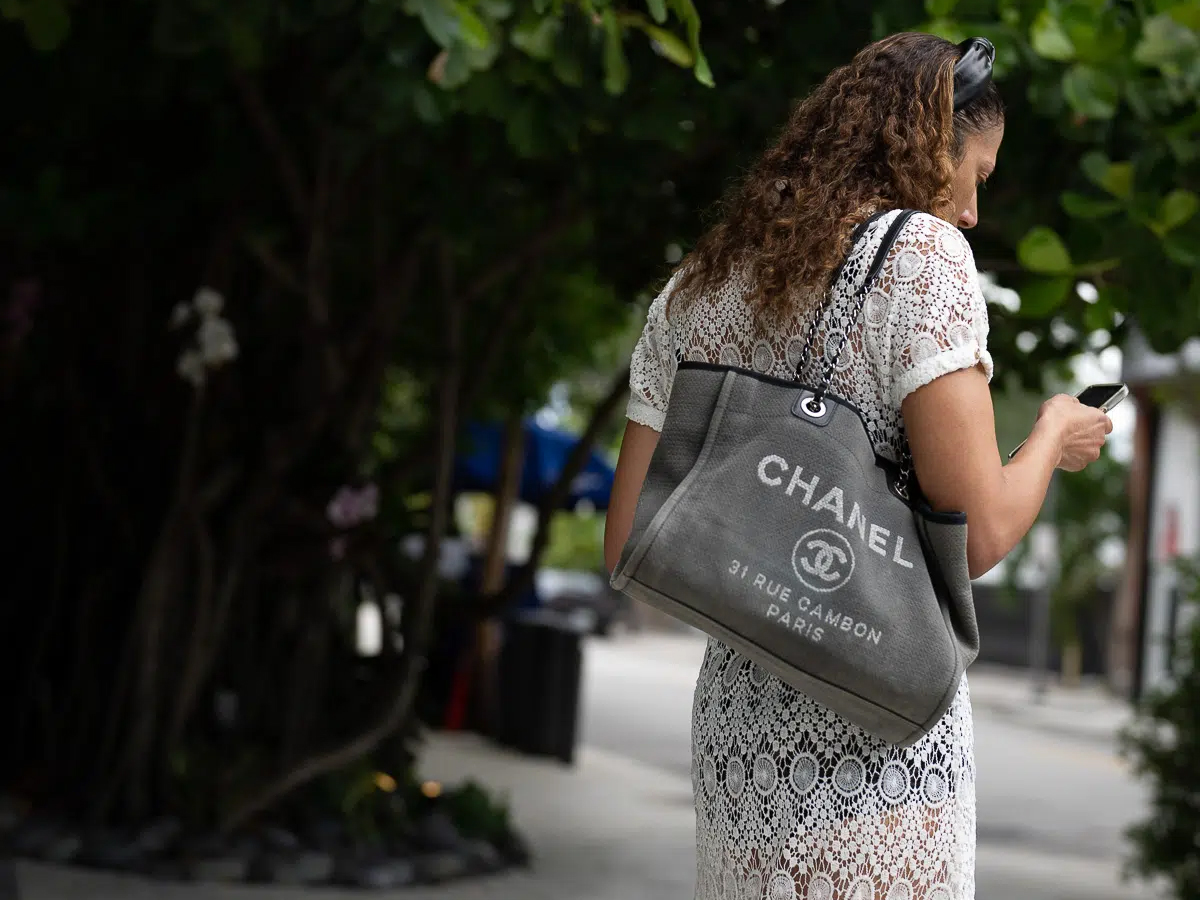 Ah, the tote – the omnipresent staple of the handbag world!

The tote has now become such a fixture of our collective wardrobes. The question no longer is, “who is the tote for?” but rather, “who doesn’t have a tote?”

Forgiving to every body type and loyal to even the most demanding, type-A lifestyles, the tote is, in many ways, a spirit sister of the backpack. It has been responsibly transporting the entirety of your existence from point A to point B (and beyond) since its earliest days. Plus, both have been relegated to a rather unfairly unglamorous status (you don’t see influencers hauling massive, full-to-the-brim carryalls), only having their respective fashion moments as shrunken-down (and, might I add, thoroughly non-functional) versions of themselves.

But what the tote offers that the backpack doesn’t is the sheer variety they’re available in. Of course, while fashionable backpacks aren’t entirely an oxymoron, their full range of benefits is often limited exclusively to their more rugged counterparts.

The tote, therefore, has a clear headstart when it comes to general acceptance and ubiquity. As I type this, I’ve got a free, foldable tote from Clarks stowed inside my Balenciaga (complete with a faux-denim print), ready to be whipped out in case I need to shop around on my daily commutes. And truth be told, it can’t really be called unstylish by any stretch of the imagination, either.

But is a tote really ever just a tote? The numerous colorways, fabrications, and sizes they’re available in confer upon users varying degrees of usability, making each iteration uniquely covetable. Thus, the seemingly simple addition of an inch-in strap drop, or maybe a top-zipper mechanism, can elevate a tote from the ranks of “just another tote” to your “all-time favorite tote.” In other words, the devil is in the details!

So, as fall leaps onto us, I want you guys to take an inventory of your bag collections and consider (because what is more delightful than musing about handbags?), what is that tote you find yourself gravitating towards the most, and why? And while you’re at it, may I direct you to a few factors that can help you decide? Yes, I may.

The Capacity of the Tote

If we had to single out any particular reason behind the massive popularity of the tote, it’d have to be their size. Their ability to haul everything but the kitchen sink makes them the go-to purse for fashionistas living the grueling city life.

As a rule of thumb, any regular, large-sized tote should fit the bill for a daily carryall. The question, then, is this – how large is “large?” Imagine the trapezoid Louis Vuitton Neverfull vs. the uniformly structured OnTheGo – because of the former’s narrower base, it lacks in terms of capacity what the OnTheGo has to offer. And if you need to carry around bulky items, such as laptops and footwear, or use your tote to “nest” other, smaller handbags in when traveling – well, then you can guess how one might feel inclined towards square shoppers more.

Thus, even though the Neverfull and the OnTheGo might be equivalent size-wise, their respective builds yields differing capacities. 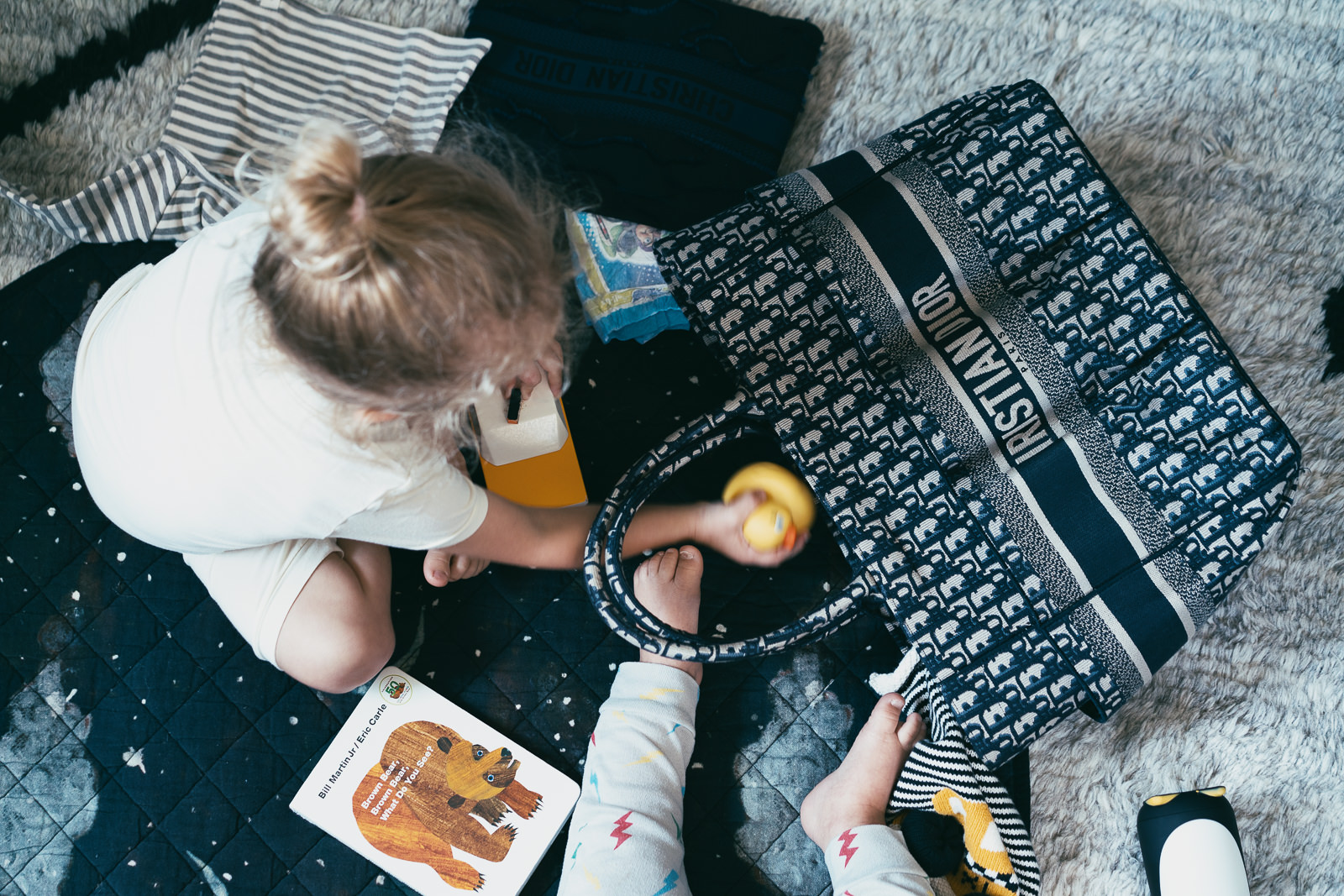 But is a tote with greater capacity necessarily more functional? We must first differentiate “dimensions” from “size” to understand that. Yes, any large-sized tote can get the job done, but whether you can snugly fit your things in them boils down to its individual specifications.

For instance, the Balenciaga Work I recently acquired, measuring 17” in length, should theoretically be an excellent fit for my 15” laptop. But because it lacks any real structure, the bag looks misshapen with a laptop. Similarly, dimensions play an important role in choosing the right tote – a few inches extra at the open top could make it prone to prying hands, for instance. These same few inches, when absent from the base (resulting in a slim, albeit sleek, profile), can lead to awkward bulges on the exterior when full.

Dimensions lead us to another important size-related matter – orientation. Do you opt for a square-esque shopper, an east-west shape, or a north-south silhouette? While square ones are more spacious, east-west styles are less bulky. On the other hand, the north-south renditions may be gadget-friendly but harder to reach for smaller essentials.

Speaking of dimensions, I was recently on the hunt on the resale market (once again) for a tote. The requirements started off simple – a plain-ish, work-appropriate black tote. With each rejected candidate, however, the parameters grew increasingly complex – so much so that I drew up a checklist, outlined here: 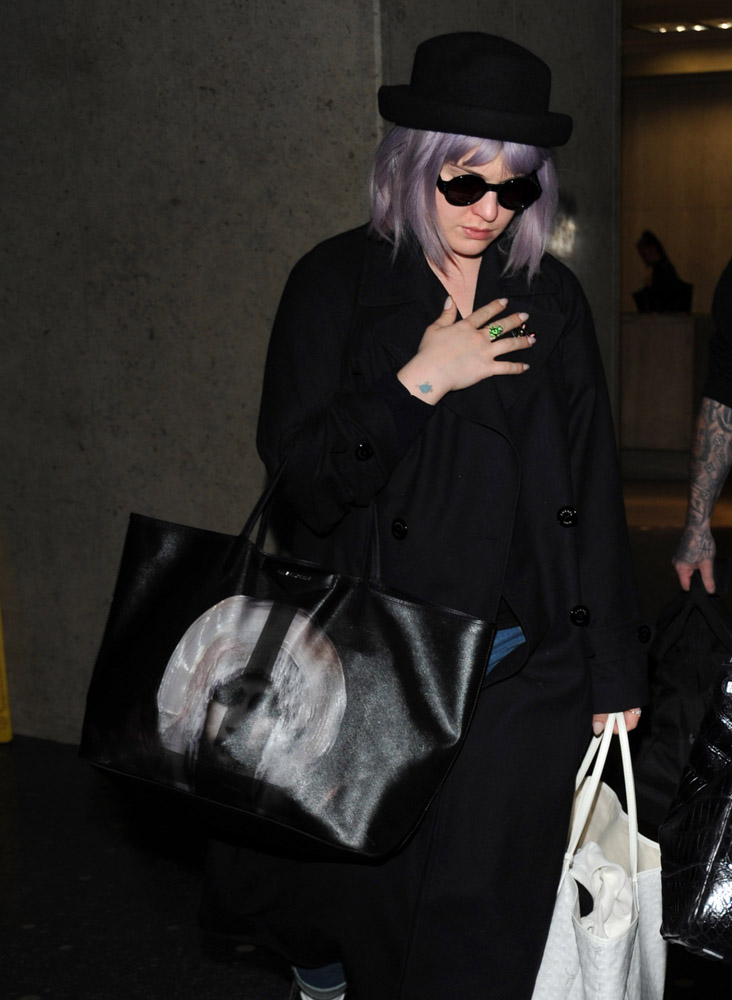 Kelly Osbourne with the Givenchy Madonna Tote (similar pictured below)

This got me thinking about how carrying options can often be a deal-breaker. I’ve foregone functionality for style with the solely hand-carried Balenciaga Work (fashion victim, I know). Some of us prefer the dual options of top-handle and shoulder-carry as offered by the LV OnTheGo and the Chanel Deauville. At the same time, the Fendi Sunshine Shopper comes with a crossbody strap for even greater carrying convenience!

Eventually, the functionality of a tote is a culmination of its size, practicality, and carrying options, with a subjective element thrown in there based on whether it suits our tastes and lifestyles. And just like a slight change in dimensions can be irksome for some users, the right balance of all the functional factors can make the tote your all-time favorite. 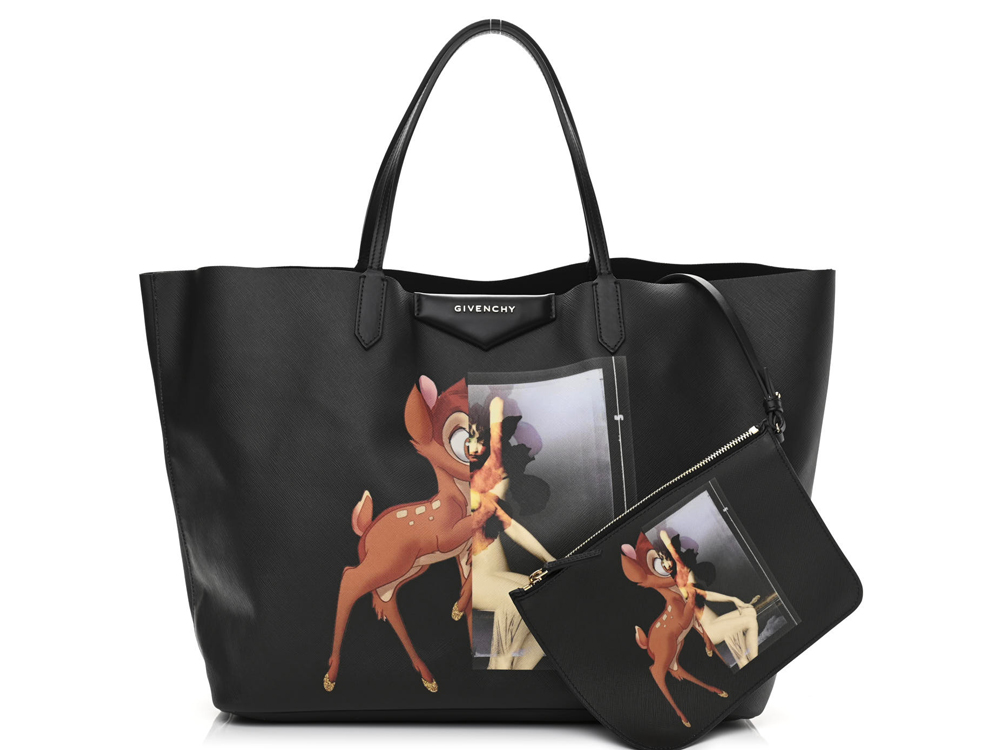 For many working individuals across the corporate world, the daily uniform is somewhat constant and, might I add, rather boring – suit, tie, and pumps, and no, not even in the more fun colorways. In this sea of drab beiges, blacks, blues, and greiges, the preferred choice of carryall is usually the status tote bag – and very often, it’s the only thing they can have a bit of leeway with.

Now, we have extensively covered the topic of monograms previously and whether they are entirely appropriate in the workplace. As a result, while women in the Finance District sporting the Wall-Street chic may be more comfortable toting a Neverfull or a Goyard, other offices may be more conservative towards overt branding. So, whether you want your tote to be identifiable to your colleagues is often a judgment call – will your Gucci Ophidia earn you envious glances, blank stares, or a lifelong purse friend?

And if you go the more under-the-radar route, do you go for an entirely low-key aesthetic – sleek black or brown leather that complements all things work-related? Or do you opt for a slightly more offbeat color? May I suggest purple or green? Additionally, if you’re straying from the so-called classics of the premier fashion houses, or the safer, neutral shades, do you worry that they’ll risk looking dated at some point? 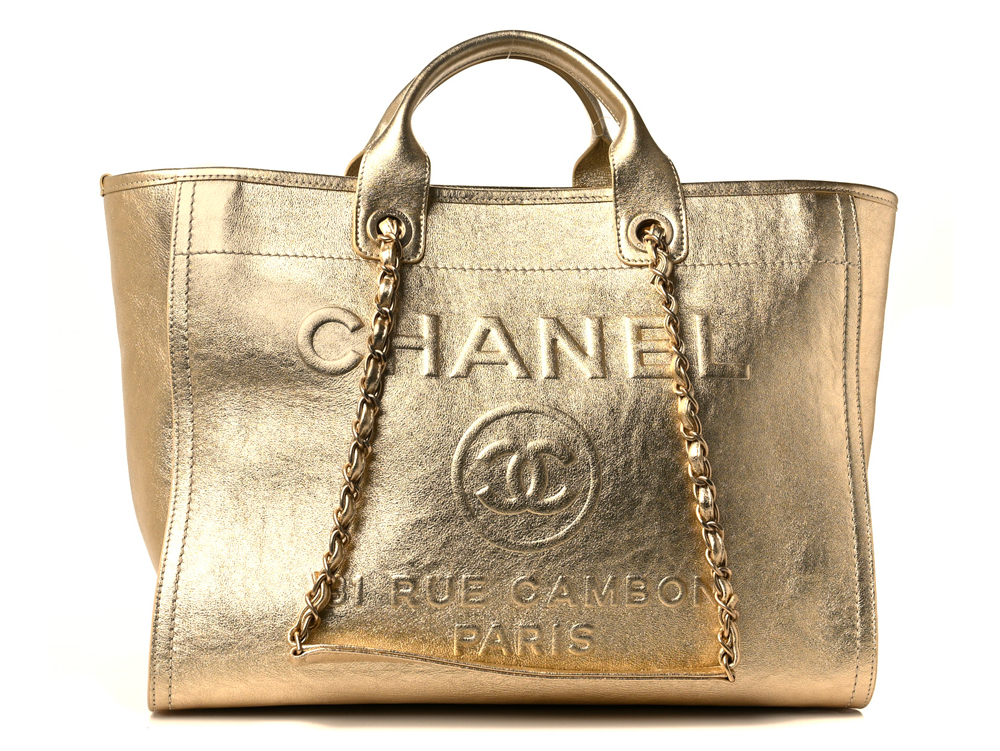 Ultimately, is there any real way a tote could look dated? Of course, it might cycle in and out of trends, but it’s always guaranteed to remain a necessity. Unless it’s those neon-colored clear PVC atrocities that were everywhere during the late-2000s – those deserve to be put to rest forever.

But back to the subject of less offensive totes, it’s probably the most fool-proof silhouette out there. And even if you aren’t necessarily a tote person, even if you practically despise the style, you’ll still find yourself resorting to it every once in a while.

For purse-lovers, on the contrary, who’s got a veritable armada of totes, the collection is never really complete (right now, she’s dropping hints about wanting a smaller, structured one in red)! And while I’m yet to own a “fashion” tote myself, I’m currently relishing using my free one – branded merch has its own place in the fashion world, just like Sarah Jessica Parker proudly totes a WNYC-version in And Just Like That. That doesn’t mean I’m making any promises *wicked grin*.

My favorite tote is the Moynat Quattro tote. It’s a north/south tote with double handles, small for hand carrying and longer for shoulders. And its just the right size for items including an iPad, but not so big things are lost in it. Unfortunately its no longer in production. I got mine used and could not be happier.

And it appears to be reversible too! Such a gorgeous and elegant looking tote, congratulations!

I only use totes for travel. My favorite is my Goyard tote and Dior Tote. If I’m not traveling they live in their dust bags. Too many years in the small/micro trend I don’t have enough stuff to fill a tote.

Ooh do share pictures of your totes! They might not get a lot of use, but they’re there for you right when you need them!

I have a LV Neverfull that goes with me when I travel, outdoor outings etc.

Ooh which version is it?

I don’t have a tote myself, as Jaime has said too, I just don’t have enough things to justify it for daily use except for when traveling, and I have a baby. BUT I completely agree with the article – it’s such a practical piece that I don’t think it can ever be outdated or out of style. Even at the height of mini/micro bags’ popularity it was still very normal and welcome to see totes.

I resisted for years getting an LV Neverfull because it is too ubiquitious. I did get a Goyard St. Louis, which I love the look, but it is just not that sturdy. When I saw the then-new Gucci Ophidia tote on the Gucci website I immediately called and put in an order. It has not disappointed, it’s attractive, sturdy, and my favorite tote.

Indeed! The Ophidia tote is divine, I’ve seen it being carried in person – it’s a lot more east/west than most totes too, although dimensions aren’t that vast.

…I have no tote, but I went nowhere without my Prada backpack – still in love after years

Indeed! So well-made and practical, not to mention, beautiful too!

The Row N/S Park tote large. Carry as much or as little as you like, just a chic bag.

Tbh it looks more like a hobo, but I love how minimalist and gorgeous it is!

I only have 1 tote (Sac De Jour). It’s sturdy, spacious and dang H-E-A-V-Y. I got the large size for my laptop but if I don’t bring my laptop I just fill it with my essentials. Still heavy though 😂

It is indeed heavy but it’s so cool that you’ve the SDJ, I’ve been lusting after one forever! I like to think it’s the weight of my love that makes it heavy!

100% Goyard. Slim, durable, can hold anything I put in it, and sits well on my shoulder

Indeed! What color is yours?

I don’t like totes, but I do use one for work. It’s a Dooney in nylon with leather straps and two leather pockets on the outside. When I was going to the gym, I carried my workout gear in a Longchamp.