Blog Debate: Should Team USA have new uniforms made for the 2012 Olympic Games? 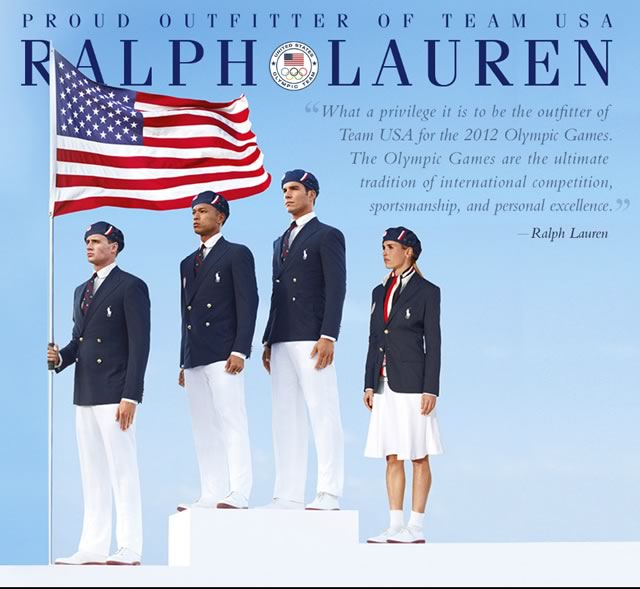 I am a major sports fanatic, and starting July 27th I will be glued to my TV to watch the Olympic games. Because of my athletic background, I have many friends competing for Team USA and with other teams around the world. Every four years, I look forward to the world coming together to root on our athletes toward one common goal: performing to the best of their abilities and honoring their country.

So when I saw Ralph Lauren was the official outfitter of Team USA, I thought it was a great fit. Now that we’ve seen the uniforms, though, let’s just be honest: RL botched an amazing opportunity to dress Team USA’s 2012 Olympians in America’s finest apparel. The official team uniforms are beyond boring and almost militant in appearance (especially the women’s uniform). A lame beret is to be atop each athletes head, and things don’t get much better as you move down. A long skirt that will be unflattering on most women’s figures will be paired with a boxy jacket. At least the men’s uniforms work a bit better, as a pair of slacks and a jacket is par for the course.

With everything Ralph has up his sleeve and his years of design under his belt, the final product is more than a let down. Oh and the worst part, the uniforms are not even made in the USA, they are being made in China. This is a major travesty, and yes I used the word travesty. A bit of outrage is brewing over the uniforms’ origins, and I’m hardly surprised. Team USA’s uniforms should certainly be made in the USA, shouldn’t they? The anger has gone so far that some are saying the uniforms should be burned and new ones should be made in the USA. So I’m turning to you, what do you think about this whole debacle?

I think white pants and skirts are not a good idea for a range of bodies, and do we really need the polo logo on the jacket?? It’s team USA, not team Ralph!  I agree that he has done some fabulous looks for fashion, so why this?

I have given in to the fact that everything comes from China. Frankly, I’m more upset by the ugly beret. I would’ve thought that the US Olympic Committee would’ve specified that the items be made in the USA. perhaps RL not only designed them but comped them to the team.

I think the men’s uniforms are worse than the women’s. Other than that, I totally agree with everything you have written.

The uniforms for our Olympic team should have been made in this country.  There is not even wiggle room on that one.  They are not that great looking but I think the public is more upset about the source of the uniforms than the style.  Big booboo for Ralph and the Olympis committee.

Most of the clothes us as Americans wear is made in China or some other country. It does not really suppose our offend me where they are made, success it accurately reflect where we get most our American designer products. When it comes to the look of the suits. They are ok and I hate the berets.

my phone botched it with weird autocorrections. But my point was that most American designer clothes are made outside of the United States

When I heard about this on Good Morning America, I just simply shook my head.  The one event that we American’s take as truly patriotic is the Olympics and to have a beret which is very French upon the heads of American’s top elite athletes as well as made in China labels is yes enough to burn the outfits in effigy! A simple chic cowboy hat to me would have been more fitting and would have provided a good balance of preppy but a reflection of American origins.It has been calculated as much as 1 billion dollars has left the United States since we can purchase this apparel as well too which I find truly Un-American…..

Oh good heavens…everything about it is awful.   Not made in the USA!   I get that a lot of clothes we wear are made elsewhere, but, really,  the Olympic Team uniforms?  Someone better lose their job over this one.  The men look like Ken dolls….the berets are really weird in conjunction with the “preppy” look…..and the women’s uniform looks like something my mother wore in the 70’s….except they’re not even really “retro”…just unflattering and frumpy.  Those athletes have “killer” bodies.  It shouldn’t be that hard to make them look good and maybe a little “hip”.  And who allowed the huge polo logo on them?  Oy-veh……Bad, bad, bad all the way around.

You really need to see the Aussie uniforms – they are soooo bad that your uniforms were held up as what we should be aspiring to!!!

I am SO agreeing with you on that one Louch.  Living there I feel able to comment that the Australian uniforms look very outdated too.  We also have white pants and skirts with a boring shapeless green blazer.   I think the USA uniforms seem to suffer from the same conservative boring feel.    I Do love the Games though and can’t wait for them to start !

IMO, I think if it will make people more happy, remake them in the USA, what is the big deal.  As far as styling, who am I to critique Ralph Lauren. They look sharp, to me a little retro anyway I thought it was about the Sporting events anyway.