The 6 Hardest Bags to Get From Hermès

In a world full of grails, which Hermès bags are the hardest to find?
38 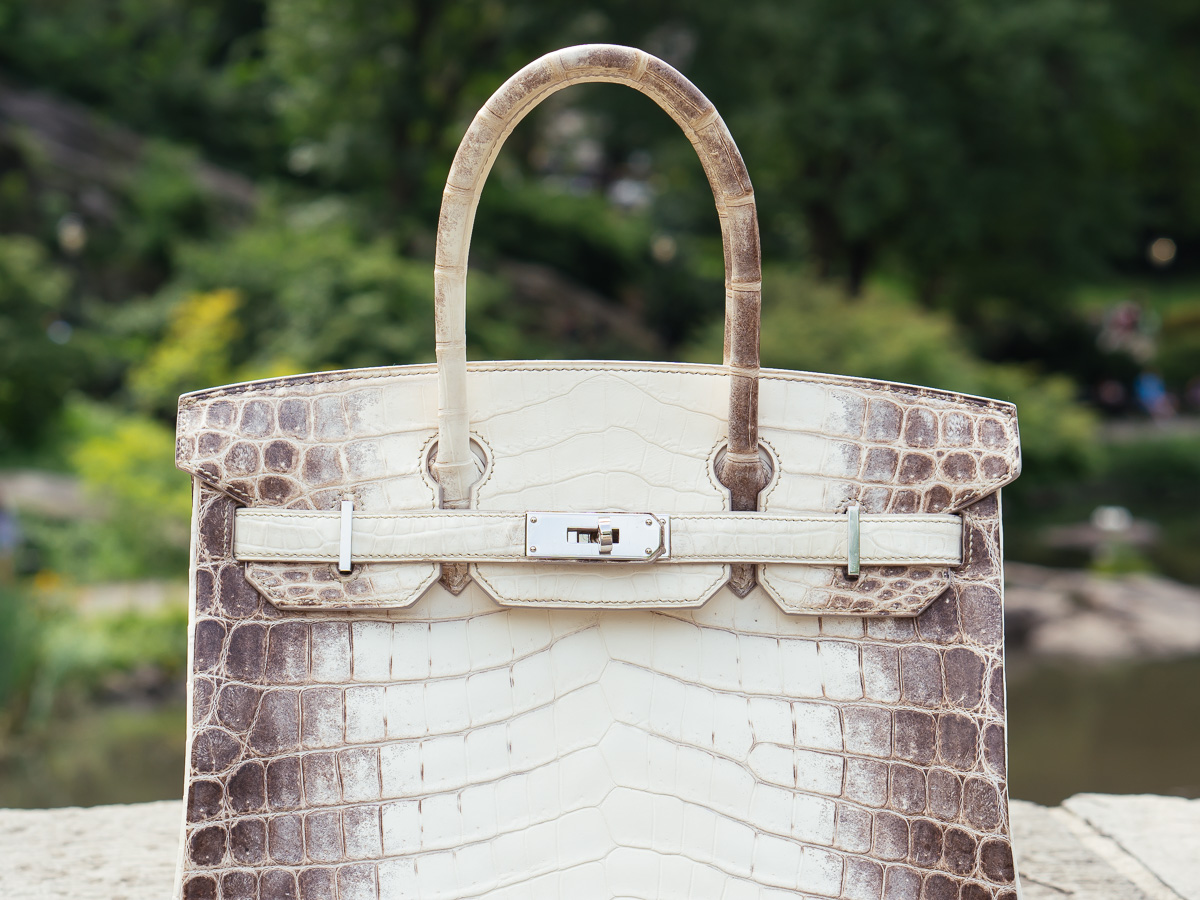 Author’s Note: This article was going to cover 5 bags, but it was too hard to choose. Enjoy!

Ok, ok, before I even start, I can hear the chorus: “EVERY bag at Hermès is hard to get!” I suppose that’s true to some extent, depending upon your location and whether, by the time you read this, our supply-chain issue will have improved. However, I think we can all agree that with Hermès, some bags are indeed harder-to-get than others, even after one has clicked with an SA, established themselves as a loyal client, and explored the various métiers in depth. Evelyne? Easy. Mini Evelyne? Not so much. As always, color and leather play a big part in the popularity of any bag (which means more shopportunities for those of you who love those offbeat colors. Yes, I just made that word up), but some bags seem just impossible, regardless.

So, as an exercise that I find simultaneously enjoyable and a likely topic for my next therapy session, let’s examine those bags that we can’t get.

You know I always start with rules: 1. This is my useless, quasi-objective opinion, based on my observation and opinion only; feel free to disagree, and please let me know what bags you think should be on this list in the comments! 2. Color generally doesn’t matter here; 3. I’m only discussing bags currently in production and observably in demand.

The Mini Lindy is a very cute, very useful, relatively accessible bag in the realm of Hermès: it fits a decent amount for a mini (at least as much as a 25cm Kelly); its fortune-cookie shape makes it a bit edgy and stylish; the crossbody factor is there for wearability; and price-wise ($6,400 for Clemence in the US), it isn’t the worst; therefore, it has all the makings of an in-demand and hard-to-get bag. Not gonna lie, I was never interested in a Lindy until I saw the mini, and it is seriously tempting even for me, although I only hand-carry bags unless it’s a backpack. 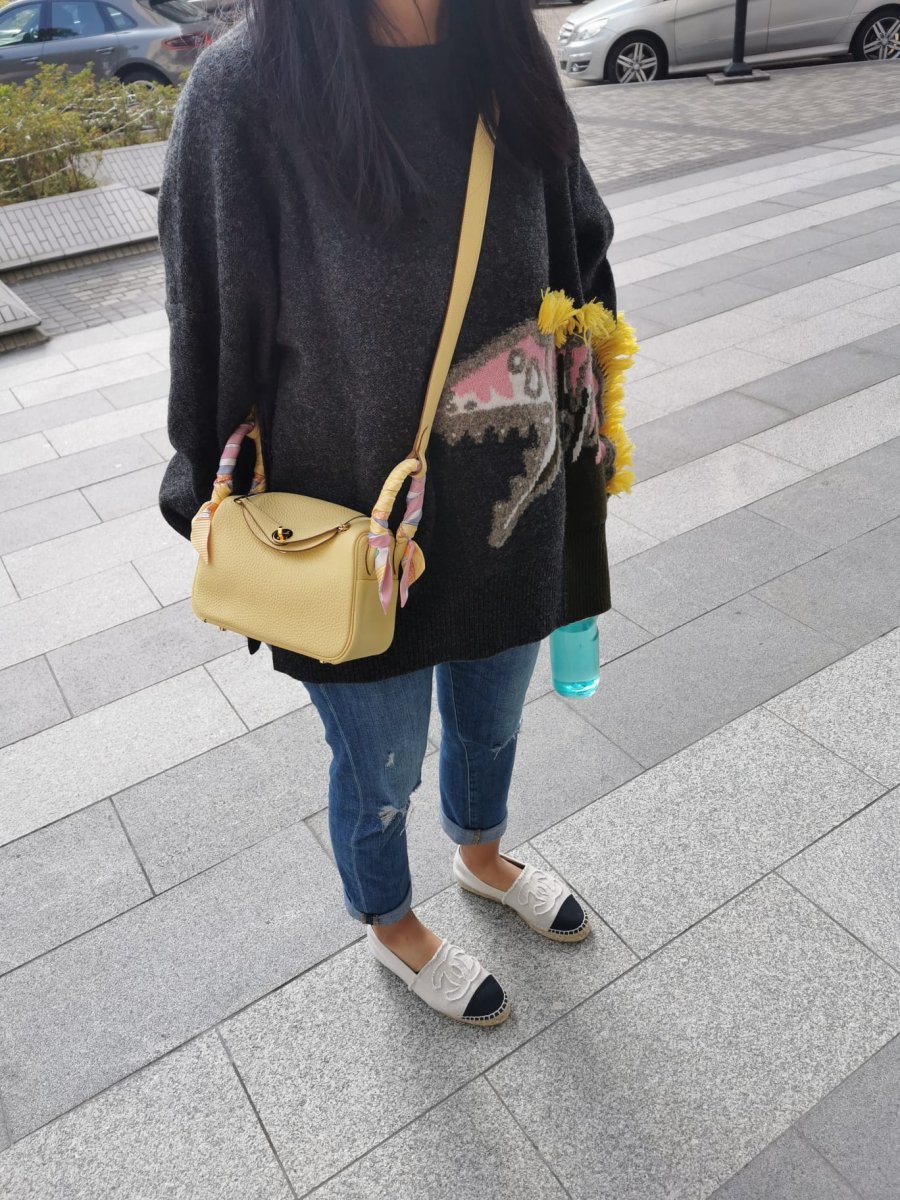 Ah, the bag that switched my list from 5 to 6 because I remembered it just as I finished this article. How could I forget? Many people love the Shadow Birkin, which is made in Swift leather and a bit pricier than a regular Birkin at $11,900 USD for a 25cm. This bag has the visual appeal of the Birkin with an edgy, trompe l’oleil twist that lends a touch more daily practicality (hey, you get the look of straps without any actual straps) and has the visual cues of the Birkin while yet being slightly different and arguably more universally accessible (if a bag can be both more pedestrian and offbeat). 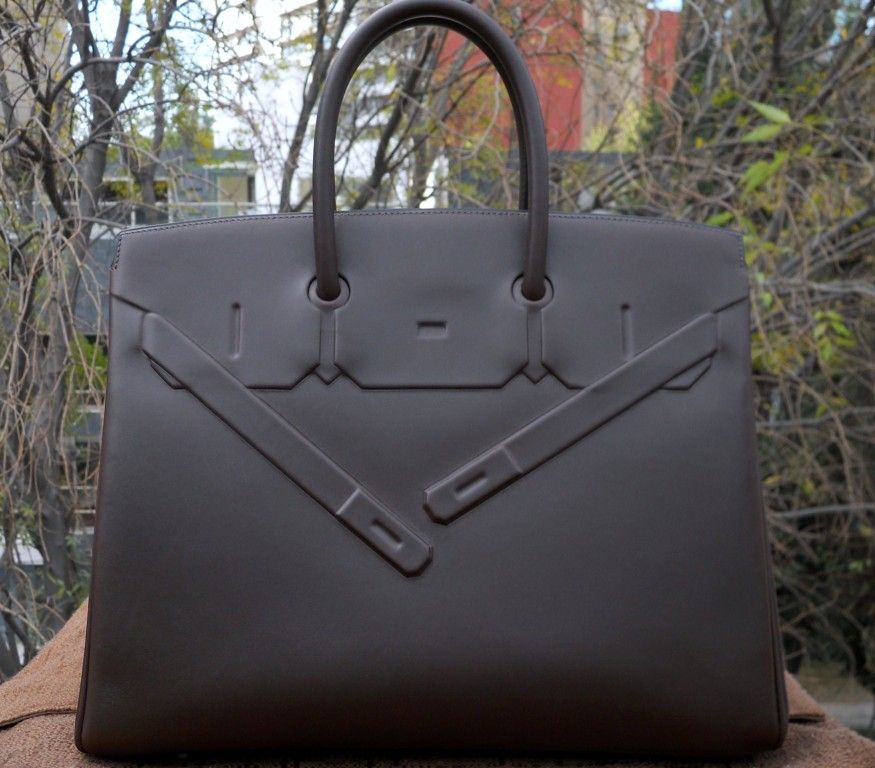 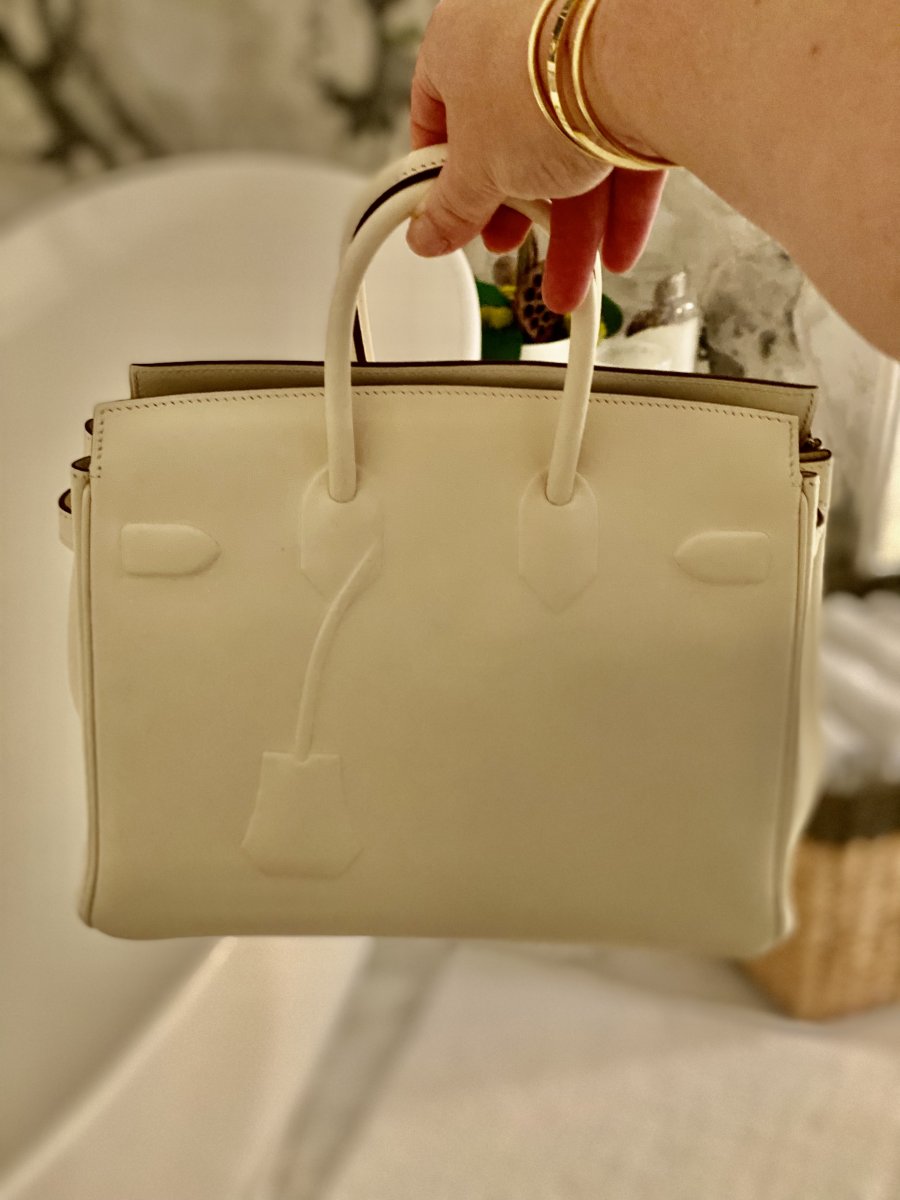 The back side of a 25cm Shadow Birkin in Nata. Photo via TPFer @AnEyeForTheBest

More than any other bag, I hear about this one the most. The popularity of the Mini Kelly is going stronger than ever, and even though it’s really tiny and carries very little, it is functional to a certain extent – Hermès enables us with SLGs like the Calvi cardholder and the Bastia change pouch that will fit just fine, along with your Hermès lipstick (of course) and a key – and for those of us who don’t follow the old rules about the sort of bag to carry with formalwear (preferably silk, preferably a clutch, definitely not leather) it is the perfect adorable size for dinner or an event. I know people who carry so little during the day that they use a Mini Kelly for daytime or travel. The latest iPhone 13 Mini will indeed fit fine (the regular and the Pro [not the Max] will fit as well without a case, but it’s snug and maybe a bit fiddly with the straps getting it in and out, seeing as how this bag is Sellier; I keep my iPhone 13 Pro in my pocket when I carry this bag).

Because the Mini Kelly is in such high demand  – I would say that despite its 4th place ranking on this list, it is probably the most widely in-demand bag in general production of all  – I feel it is important to note that these are indeed hard to get despite what you may see on Instagram, or even PurseForum. When I bought my Mini Kelly (remember, I’ve been a customer for over 20 years), my SA told me it was the first one he had seen at the boutique in about two years. It may seem like they are being offered everywhere, but I am of the impression that the majority of the Mini Kellys sold wind up being photographed and shown on social media. We are seeing almost all of them. There aren’t that many. 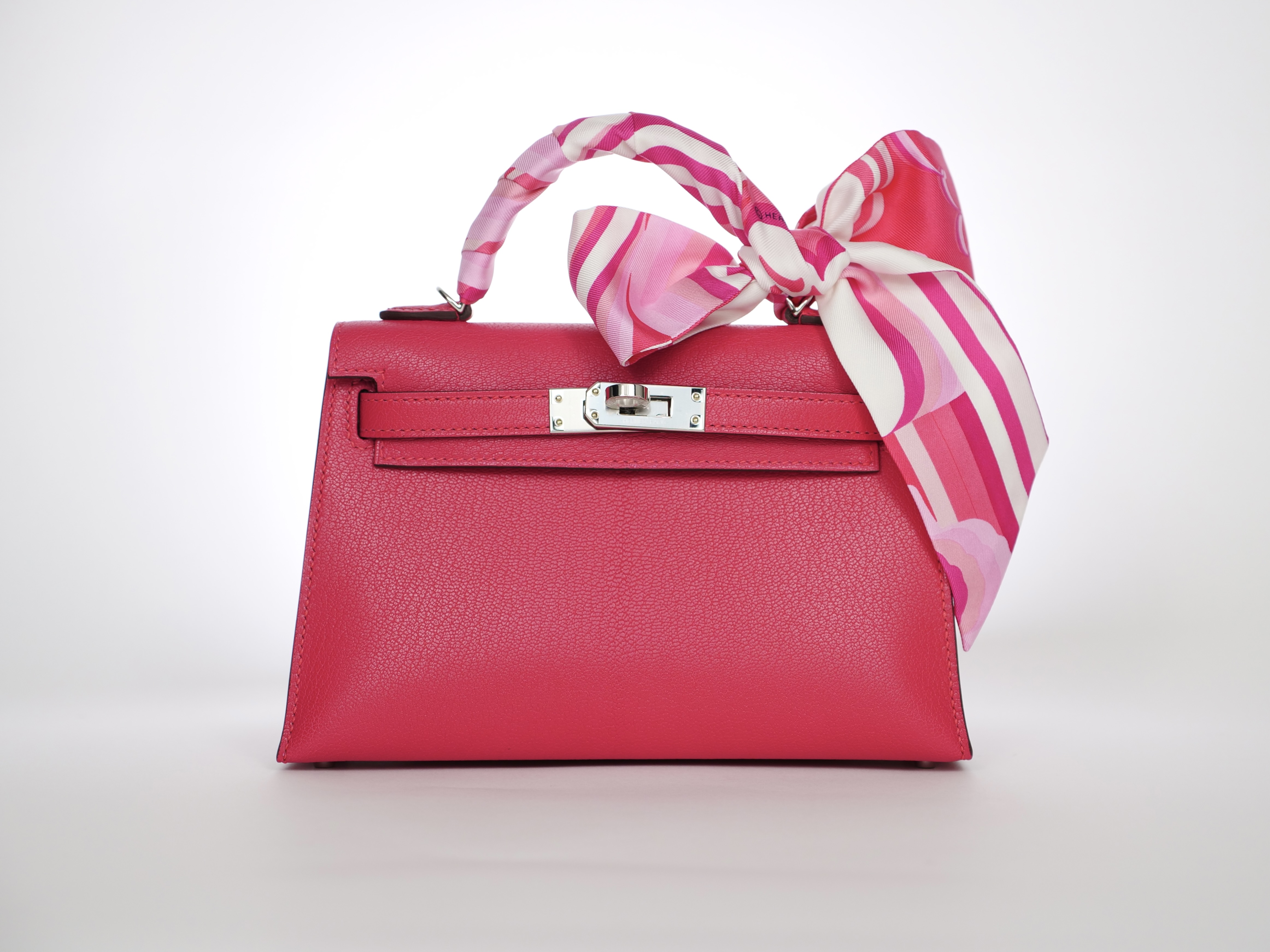 I hesitated to place this bag this high on my list, as it seems that this is one of those very specific styles (warm weather only!), but it also has a very loyal fanbase. The Kelly Picnic bag, which was introduced back in 2011 in the 35cm size, and is now produced in the Mini 20cm size, is indeed incredibly rare and hard to come by, and unfortunately it is probably only going to get harder to come by because I am hearing rumors that this year they will stop producing the Kelly Picnic, making the Birkin Picnic instead. Personally, I’m not the biggest fan of the Kelly Picnic, primarily because I have owned a wicker (Hermès calls it Osier) bag, and I don’t love the texture or weight (more for all of you, then!), but the demand for this style, especially among collectors, is still quite strong. 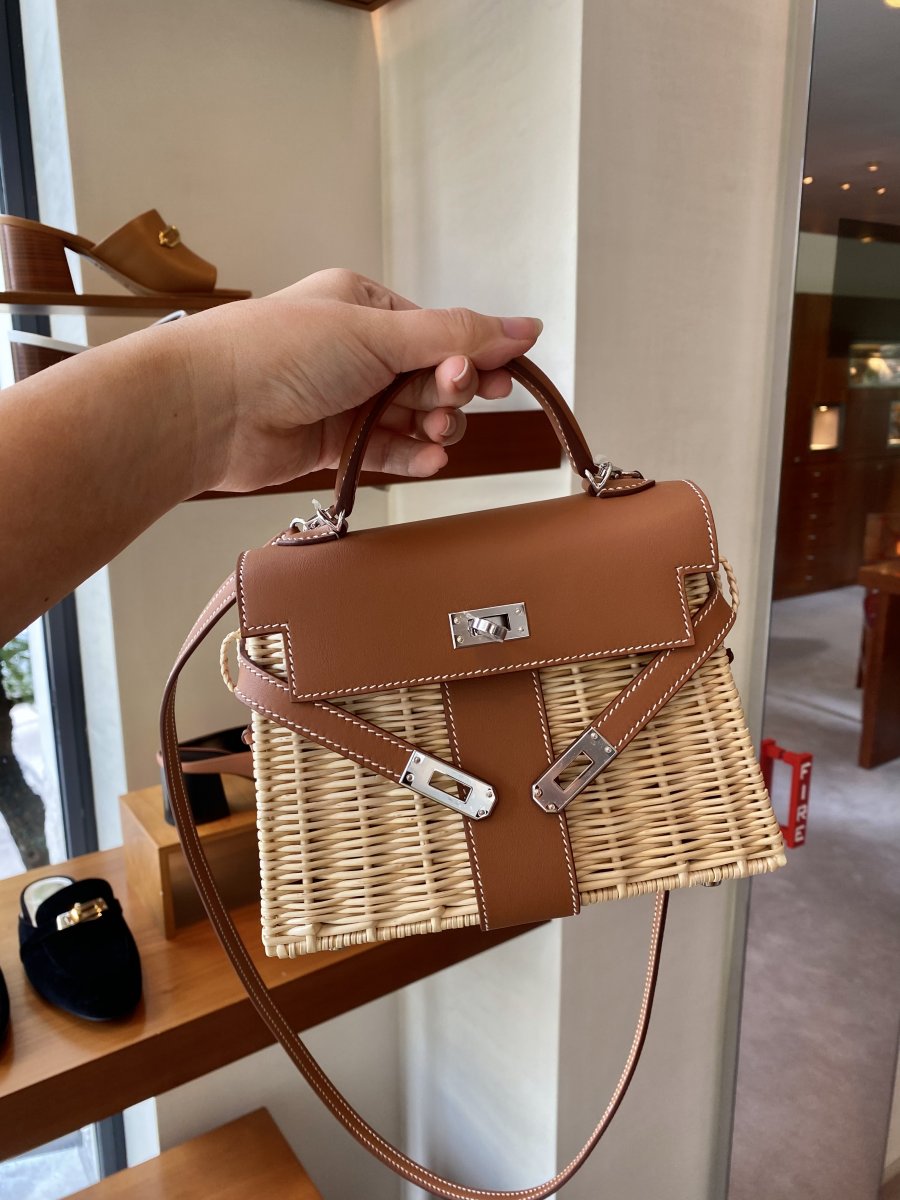 I was tempted to make this section about the novelty iterations of bags, like the Flag Birkin, the Kelly Lettre, the Fray, the Cargo, etc. In the long run, I’m not sure if it’s so much that these are in demand purely on their own or just because they are in very limited production by season. Similarly, where to place the Qu’elle Idole (Kelly Doll)? It’s certainly rare and certainly in production, but how genuine is the demand for the bag itself, besides the natter of rarity? 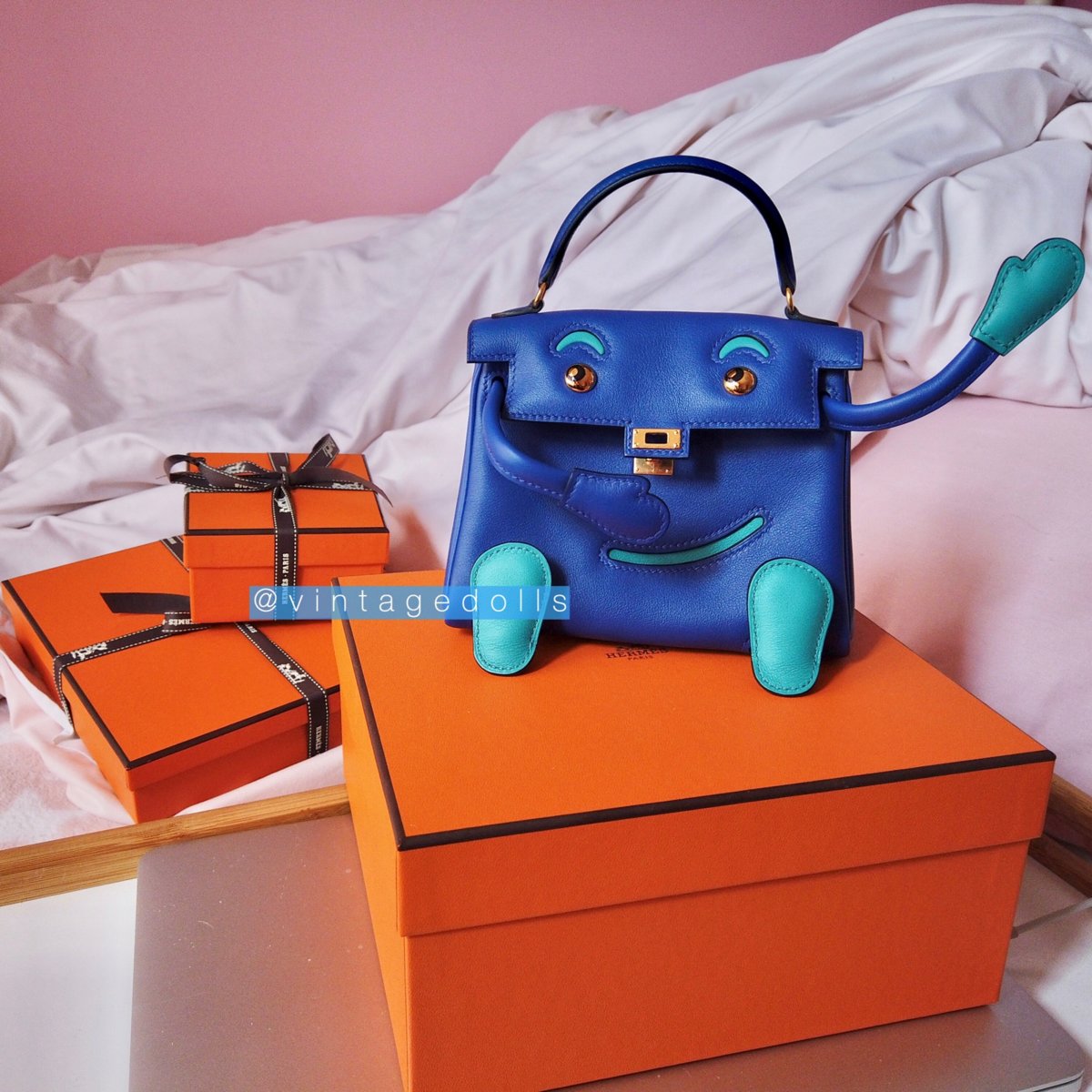 When in doubt, I look to my husband. He’s like Mikey from the old Chex commercial: it takes a lot to impress him. It’s not that his views are pedestrian or overly critical; it’s that they are discerning (he loved the coming Kelly Desordre immediately and asked if I could get one, while it took me a bit more time to come around). I think the most visceral reaction he has had over the many years of my love for Hermès was with regard to the Birkin Faubourg, when it was on the cover of the Hermès biannual magazine, he loved it immediately and was fascinated with it, as was I. I don’t know many people who didn’t immediately connect with the design; the combination of a super small Birkin (it’s 20cm, which makes it a “Mini” and smaller than the smallest Birkin in production, though larger than the doll-sized Micro Birkin of years back) with the intricately-detailed facade of Hermès’ famed 24 Faubourg flagship boutique fashioned on the exterior, is undeniably appealing. Even better, Hermès seems to be producing this style in different colors every year, from the original “evening” version pictured below to a tan/brown version and, more recently, a light/white version.

A Birkin Faubourg for sale at Christies, December 2021. Photo via @The_Notorious_Pink

In a decision that is probably shocking to no one, the Himalaya(n) is probably the hardest bag to get. Hermès Himalayan bags are absolutely “holy grail” territory, as well they should be. Nearly impossible to find – yeah, it’s VIPs only – and only available in matte finish with Palladium Hardware, a Himalayan bag (Birkin or Kelly, although they do make a few other styles) is made with Niloticus Crocodile and dyed to “resemble the colors of the Himalayan Mountains” (or, um, something like that). Only a very few Himalayan bags are made per year, and they cost more than non-Himalayan exotic Birkins and Kellys (currently $61,700 for a 25cm Himalayan Birkin). This is truly a dream bag!

A 30cm Himalayan Birkin. Photo via @The_Notorious_Pink (the bag is not mine, it belongs to a good friend!) 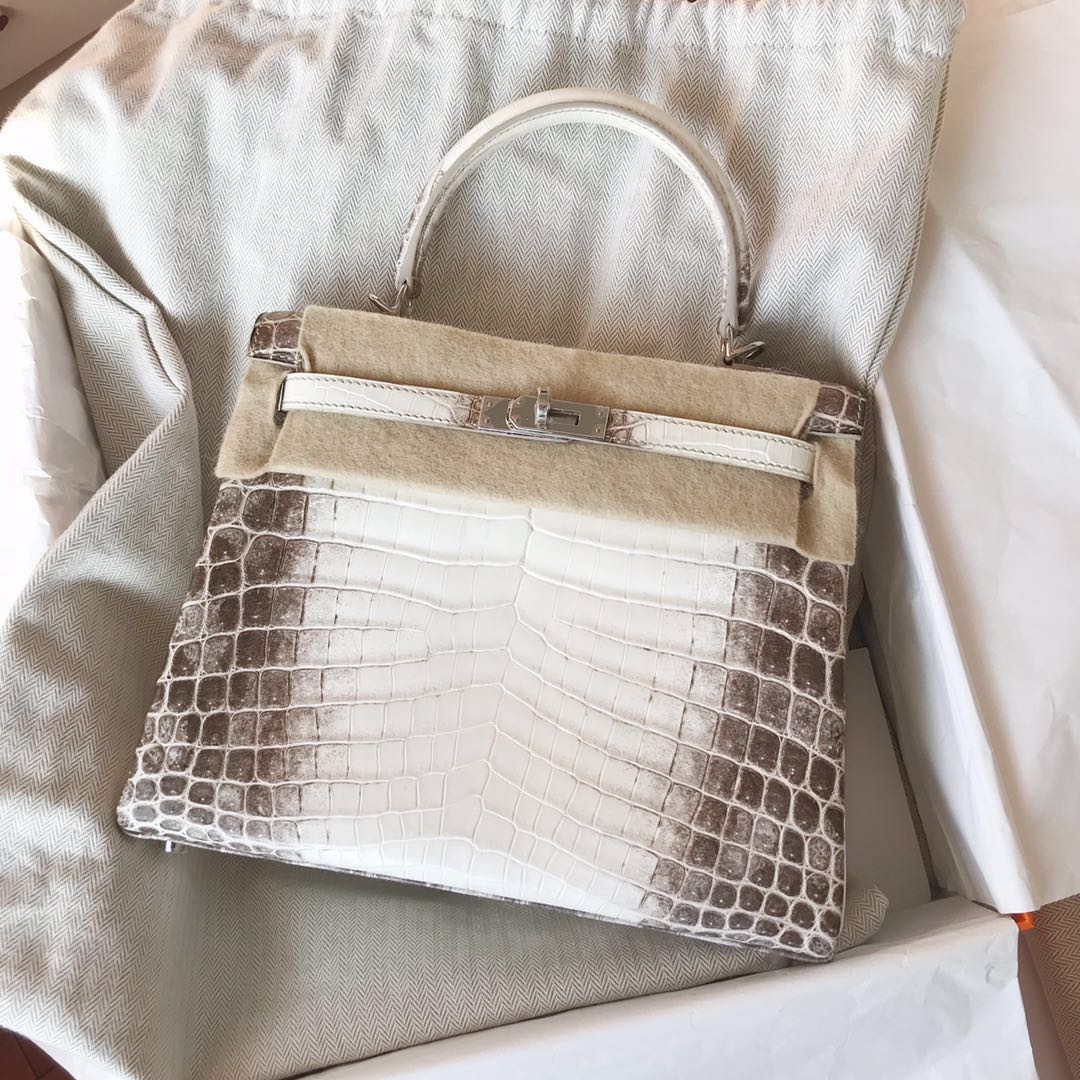 Definitely not a fan of the Shadow Birkin, WTH? I have considered purchasing a basic Birkin previously but hearing of the games you have to play to get one in the boutique while there are many on eBay soured me on the whole thing. I am going to stick to Chanel.

I’ve never seen the fascination with any of these bags. I think the Birkin is boring. There are too many copies of it now. I certainly wouldn’t queue up for one.

Omg thank you! Boring bag with 0 design for boring people who take no risks in life

What? People that like Birkin’s are “boring who take no risks in life”? That’s a ridiculously, laughable exaggerated assumption! What do you think about people that carry Chanel? Dior? Louis Vuitton? Gucci, etc.? This should be fun! 😂

I own three Himalayan Birkins, (25,30,35) and it took me two years to get one. I’m hunting down a Birkin faubourg. Thank god for my inheritance!!! Without it I would be bankrupt!

Thank God you dont have to work! Sheesh

Why would you want the same Himalayan Birkin in 3 different sizes? I’m not meaning to be critical, just curious. 🌹

You should post a picture of your THREE Himalayan Birkins together to show us!

The idea that anyone ascribes value to “difficult to obtain” speaks volumes about that person’s value system. Shallow? Seemingly. Privileged? Definitely. And I’d guess that Himalayan Birkin with the diamond clasp is far more difficult to obtain, if that’s the social-climbing goal. Very sad that one-upping each other among the uber-wealthy is something people aspire to accomplish.

Qu’elle Idole is outstandingly ugly to me. I know it has its fans but eugh

10
Reply
Braeden
Reply to  Ed B

I have a Kelly doll, and the only reason I have it is because it was a gift from a dear friend. I hate it.

Yes I have one.

If money’s no object, you can find most of these on Fashionphile🤣

I believe that it’s spelled Quelle Idole rather than “Qu’elle Idole.”

Right?!? Especially when exotic skins discover over time no matter how great you care for them. That thing is gonna be YELLOW

Oh! I would love to own a mini Kelly! It may be too small to be very useful, but it’s so cute!

I think it’s more like a clutch than anything, but cute!

I have a few. They can barely fit my iPhone 12. They’re cute but, unless you’re a collector or a fan of the mini bag trend… but good luck!

That picnic is delightful, but I’m a fan of the toiles and other odd things. The others… whatever.

Dior has a cute toiles saddle bag in leather!