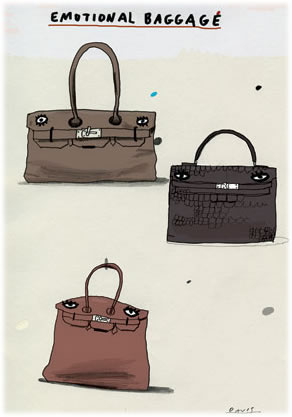 While our site reads “Shallow Obsessing Strongly Encouraged“, there is so much more to the people of Purse Blog and Purse Forum. Boasting over 68,000 registered members, The Purse Forum is one of the fastest growing and most active communities on the web. Nestled in the vast forum are sub-forums upon sub-forums of members. These members have congregated because of their passion for handbags yet in the end have formed much more. Many have met others and become great friends, while groups of members are enjoying meeting up to shop and eat. This past spring a group of Hermes members did just that, resulting in a fabulous weekend and a feature in the New York Times. Christine Muhlke from the New York Times met with the Hermes ladies to see a little bit into their world. Yesterday in a special style section of the NYT was an alluring article about some of the women behind the Hermes group. For a fun read about our amazing Hermes Forum please check out the article at NYT!

Special thanks to all of the ladies who participated and Christine for featuring the fabulous members of our forum! :mrgreen:

It’s amazing the girls you can meet on the Internet. It’s a democracy that brings together collectors, fetishists and everyday enthusiasts from around the globe to share their knowledge about, say, meerkats or Churchill. Now even lovers of the world’s most expensive handbags are geeking out.

Purseblog.com is a two-year-old site whose 58,000 forum members chat about Marc, Louis, Jimmy et al. The site’s most elite forum is, naturally, HermÃ¨s, where women with handles like H_addict and BirKineSS post their latest purchases, rhapsodize over their dream sacs and go into so much detail about leather and hardware you’d think it was a Dungeons & Dragons site.

Read the rest of the article after the jump!

“Cyclamen only comes in epsom and chÃ¨vre,” reads a typical post, “and there are no chÃ¨vre Evelynes.”

There’s also a real-time component to the community, like the New Yorkers who hit the Madison Avenue store every Friday; the group that went to Las Vegas, dining at restaurants like the Olive Garden to save money for their higher shared purpose; and the Asian contingent that met in Singapore.

During an early spring weekend, almost 30 of the faithful converged on Manhattan to put a face to the avatar. But first they shopped “” some members recognizing one another from their purses. (“I knew that was your Lindy!”) The perky blond Southerners stuck together, as did the women in black, while locals couldn’t help flaunting their relationships with the S.A.’s, or sales assistants, the true keys to the kingdom. (Forum regulars have been scolded by their S.A.’s after posting their purchases, angering the have-nots.)

After scouring the store, SoCal and traceyd adjourned to La Goulue for Champagne. (Out of embarrassment, all of the women interviewed requested that only their screen names be used.)

“We met in the ChloÃ© room,” said SoCal, an attractive 30-something brunette in jeans, heels, a tailored jacket and a crocodile collier de chien bracelet “” or C.D.C., as the ladies refer to it. Traceyd, an impeccably maintained Upper East Side boho with a taste for ethnic jewelry, had posted, “Should I give my 16-year-old a Paddy?”

Like others in the forum, traceyd had traded up to HermÃ¨s, selling her 50-plus “It” bags to focus on Birkins, which start at $7,000: “I thought if I had a Birkin, that’s all I needed. But it wasn’t.” She now has three Birkins, as well as eight other styles. But, she added, HermÃ¨s has made her more selective: “I’ve bought less crap in other areas of my life.”

Though they’d never met F2F, they knew a lot about one another, encouraged by threads like “Do you ever not long for anything else?”

“The people on the blog think the HermÃ¨s girls are the most snobby,” SoCal said. And while she acknowledged that the HermÃ¨s demographic is older and more educated, she asserted that they’re not a bunch of “trust-fund girls,” just powerful women who happen to have a fetish.

I asked SoCal what she does. “I’m a tenured professor of psychology,” she said with a laugh.

And traceyd is a successful screenwriter. They were joined by an anesthesiologist, a surgeon, a pharmacist, a lawyer, a corporate risk management consultant, another psychologist and a designer from Australia the next evening, at an Upper East Side town house. They weren’t all draped in scarves and enamel bracelets; one wore sweats. In fact, the more they spoke, the more it became clear that they were collectors, not shopaholics “” another rabbit hole entirely.

“That’s a 28 in noisette!” one said, checking a Kelly from across the room.

But soon their conversations turned to work, parenting, hobbies, the war.

“It’s beyond bags,” said shopmom411, a Berkeleyite whose posts are accompanied by the Epictetus quote “Know, first, who you are; and then adorn yourself accordingly.” She added, “This group has opened up my world in a way that nothing else ever has.”

Someone shouted, “Heather’s getting a divorce. What scarf should we buy her?”

For this sisterhood, which is planning a pilgrimage to Paris in ’08, their purses transcend status. “It’s a way of life,” explained Ninja Sue, who bought her 12th bag that day.

Shopmom411 said, “We saw all these women with Birkins on Madison, and I don’t think any of them appreciate what they have.” The gang clucked in disbelief. “Some of us have more bags than the really wealthy people,” she said. “We’re just average ladies with a passion.”