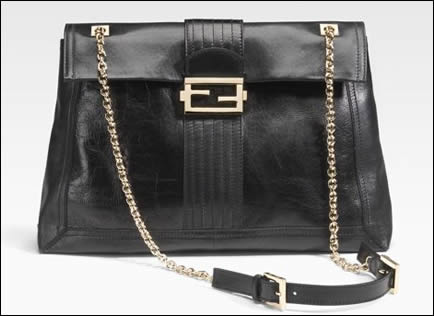 Fendi, you’ve got me a bit vexed. Actually, you’ve had me a bit vexed for several years now. Why is that? Mostly because you continue to commit attrocious crimes against handbags, sell them for exhorbitant sums, and yet not go completely out of business. I’ll admit, I liked the original Spy bag. But all the Spys that came after? The paillete Spy? The multicolored zucca Spy? The Spy that looked like it was made out of someone’s old, puffy, nylon winter coat? Fendi, as a brand, is a great example of a company and takes something that’s fairly nice-looking and tastefully done and milks it for absolutely all the money it is worth until it’s dead as a doornail. And when they don’t have anything that they’re currently milking (like, uh, now), they come out with some really average handbags.

Case in point? The Fendi Maxi Baguette Shoulder Bag (really? We’re still doing baguettes? Sex and the City ended years ago). On the surface, I’ll admit, there’s absolutely nothing offensive about this bag. It’s black, and it’s hard to argue with black, although it’s boring. The hardware is simple and unobtrusive (which is code for boring). It’s ultra-structured, and has a half leather, half chain shoulder strap that is a little too long for my taste. In fact, the chain is a little too thin, and the leather section of the strap looks like kind of an afterthought. In fact, the entire bag seems like kind of an afterthought. The problem I have is that I don’t see any innovation here – nothing that catches my eye and makes me think about the design of the bag. Sure, the bag works on a practical level – but why pay almost $1600 for this (just because it’s Fendi?) when there are so many other modern, interestingly designed, new-looking bags out there for that amount or less.

So am I way off base? Have I missed something breathtaking that Fendi has done (I like their Du Jour bags, but they never promote those)? Let me know in the comments. Buy through Saks for $1,590.