The Chanel Flap vs. The Hermès Birkin

Last year, a piece of news started making headlines in major portals like the South China Morning Post and Women’s Wear Daily. It was centered around a hit Chinese TV series called Nothing But Thirty, where a group of wealthy socialites, all toting Birkins and Kellys, cropped out a friend carrying a Chanel flap (a limited edition from 2017 no less!) from a group picture on social media, sending the said friend scrambling for her own Hermès purchase – a chapter in not-so-distant history Chanel and Chanel-lovers alike would most likely want to forget.

Battle Of The Giants

This was one of the few, highly-publicized instances when the tension between the two legendary fashion houses came to a head, but did it emerge with a clear winner? Well, not really. While Chanel fans were (understandably) outraged at the sheer distaste displayed towards their beloved brand, the snobbishness of the Hermès-wielding socialites didn’t do the brand any favors either, garnering, in equal parts, backlash and intrigue towards the storied leather-crafter. But the demand for Birkins and 2.55s has never been higher, with literally thousands of TPFers and bag-lovers all around the world lusting after these two specific handbags, both being regarded as “epitomes of elegance”, “wardrobe must-haves” and “sound financial investments”. So when you’re planning to embark on the acquisition of one of these Holy Grails, whether as a first-timer or as a buyer who’s worked their way up from mid-tier luxury brands, one question you’re likely to face pretty early on is “WHICH ONE?!” In fact, Nothing But Thirty merely mirrors some of the sentiments and opinions you’re likely to encounter on this journey, like the “Oh no, Hermès’ SAs are SO rude!” from the flap-addicts or the “No, don’t get Chanel, their quality is terrible!” from the swears-by-Hermès crowds.

But fear not, I’m here to make you even more baffled. Kidding! The knowledgeable members of the PurseForum threads like “Birkins are Banging!!!” and “FIRST Chanel Bag” will do that for you already! What I will proceed to do instead is take you on a brief trip of each of both bag’s (much-discussed) histories to hopefully give you a starter guide into the expansive and fascinating worlds of these two haute couture giants.

All of us here are pretty much familiar with the quirky nitty-gritties of how these two legendary bags came to be, like how Jane Birkin, on an airplane trip, spilled the contents of her basket (seriously, I knew how attached French women are to baskets, but really? On a plane too? Was this a thing in the 80s?), leading to a chance encounter with the Hermès CEO (who just happened to be on the same flight) and eventually, the design of the Birkin “on a sick bag”, serving as a modern alternative to the boxy, “ladylike” bags of the era, a gym bag for Kim Kardashian and a nappy bag for Kate Moss.

Chanel’s 2.55, on the other hand, was conceived in February of 1955 by Gabrielle Coco Chanel, defying the norm of stiff hand-carried bags to make fashion functional and stylish for women. What these two share in terms of their histories, however, is that, much like Longchamp (although at price points nowhere similar to it), the 2.55 and the Birkin rose to solve some very real problems that women of that era faced with their handbags, and that makes them the classic carries they have evolved into today.

Now, while the heritage factor has established these two purses as pioneers of the luxury handbag world, it is the significance associated with each in pop culture that has made them into the individual icons we know them to be.

“There’s no fun in a bag if it’s not kicked around, so that it looks as if the cat’s been sitting on it – and it usually has. The cat may even be in it!”

The Birkin, although named after the chic bohemian singer, who told BBC, “There’s no fun in a bag if it’s not kicked around, so that it looks as if the cat’s been sitting on it – and it usually has. The cat may even be in it!”, has become a status symbol like no other. With crocodile, alligator, lizard-skin variations in a myriad of hardwares encrusted with diamonds and regularly fetching six-figure prices at auction houses, the Birkin was popularized by shows like Sex and the City, and the Instagram feeds of the Kardashian clan and Victoria Beckham and every celebrity/influencer/rich person/Pharrell Williams ever.

In fact, even the most expensive handbag in the world is a Birkin, the ultra-rare Himalaya Birkin, while its other exotic counterparts aren’t too far behind either! Another element that adds to its cult-status? Its exclusivity. So even if you’re willing to shell out *that* much money on a bag, you won’t just be able to walk into a Hermès store and get your hands on one! 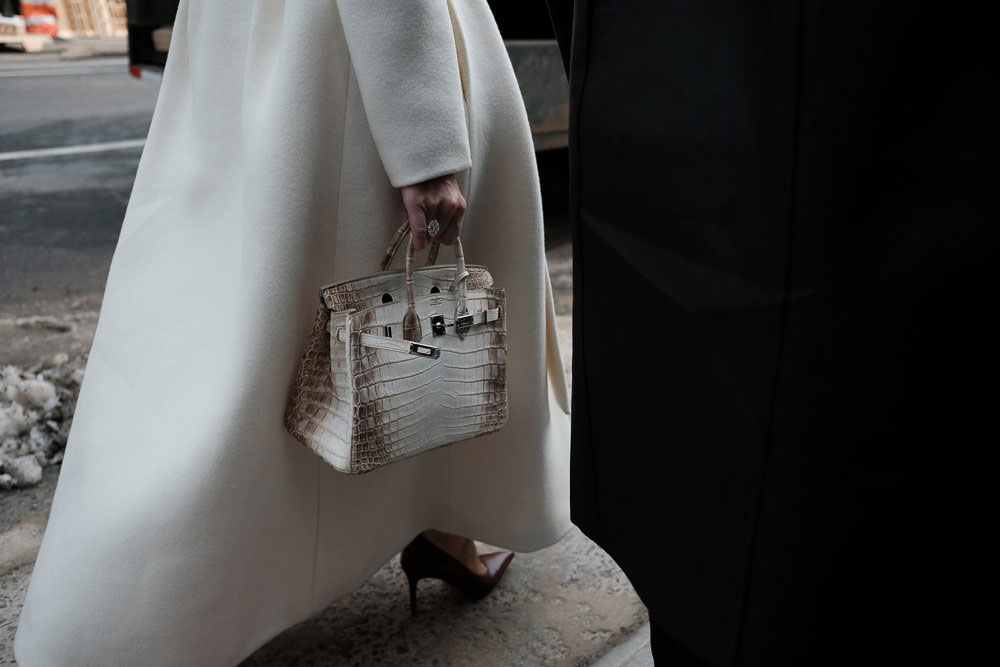 The 2.55, on the other hand, has become an exemplary icon for women-on-the-go, because of its hands-free glamour, iconic quilting (that very few brands haven’t imitated yet) and timeless versatility. In terms of exclusivity though, while they do sell out rather quickly, they don’t play as hard-to-get as Hermès does with its Birkins, and PurseForum member mikimoto007’s comment really sums it up:

“The Chanel bags seem much more inclusive, which is maybe something to do with Coco Chanel’s upbringing. Everyone – if they save, if they can afford it – can have a Chanel bag, and I don’t regard that as a bad thing.”

The next most important consideration that comes into play is the price, and let’s be honest, this is really the most important consideration for a purchase of this magnitude. Almost every bag-lover out there (myself included) dreams, or has dreamt, of owning one of these bags, and if you’ve got yourself one already, kudos to you! However, for would-be buyers (or returning ones, because is one ever enough?), the biennial and sometimes triennial price increases of both fashion houses is indeed a matter of much concern. Chanel bags, for example, have always tended to be more “affordable” than a Birkin, which regularly ventures out of the five (or more) figure mark. But recent price increases have put the Classic Flaps and 2.55s above the $8,000 range. And who knows, the very next bump might break that $10,000 mark! On the flip side, this means they’ll only get more expensive over time, so while these values are hard to stomach, if you have garnered the courage to splurge (super envious here), or are starting to save for one, you’d best start figuring out which one suits you better!

Speaking of suitability, there are plenty of tPF threads talking about “Which Chanel purchase(s) did you regret?” and “Hermès Purchase Regrets”, where functionality (or lack thereof) often is one of the primary factors your $$$$$ handbag ends up sitting in your closet instead of living a life. Now I’ve already spoken at great lengths about my qualms regarding the ultimate usefulness of flap-style purses like the 2.55, but the Birkin, with its heavy leather body, relatively small top handles sans a shoulder strap, absence of organization or pockets and fiddle-y closing mechanism, isn’t the most practical bag out there either. Plus if you’re getting a lighter color, GOODBYE dark denims, HELLO stains!

Even besides functionality, quality of construction is one of the things that really sets apart the two bags; while each Birkin is hand-crafted by a single artisan for more than 48 hours, Chanel bags have been argued to be mass-produced, and some have even claimed that they are made in China! While much of this is purely speculation, something that veteran Chanel buyers do seem to unanimously agree upon is that Chanel’s quality has now declined in relation to its older pieces, which, paired with the fact that they are more expensive than ever, may be a bigger deterrent than you might think!

Spotting in the Wild

Adding on to that, ubiquity may be another factor that is likely to influence your choice of your Holy Grail purchase – Chanel bags being more accessible than Birkins in general, meaning that you not only will spot a lot more people carrying it in the wild, but there are also a lot more quilted counterfeits in circulation, than Birkins, although those too are by no means entirely unavailable, given the booming resale market of today. 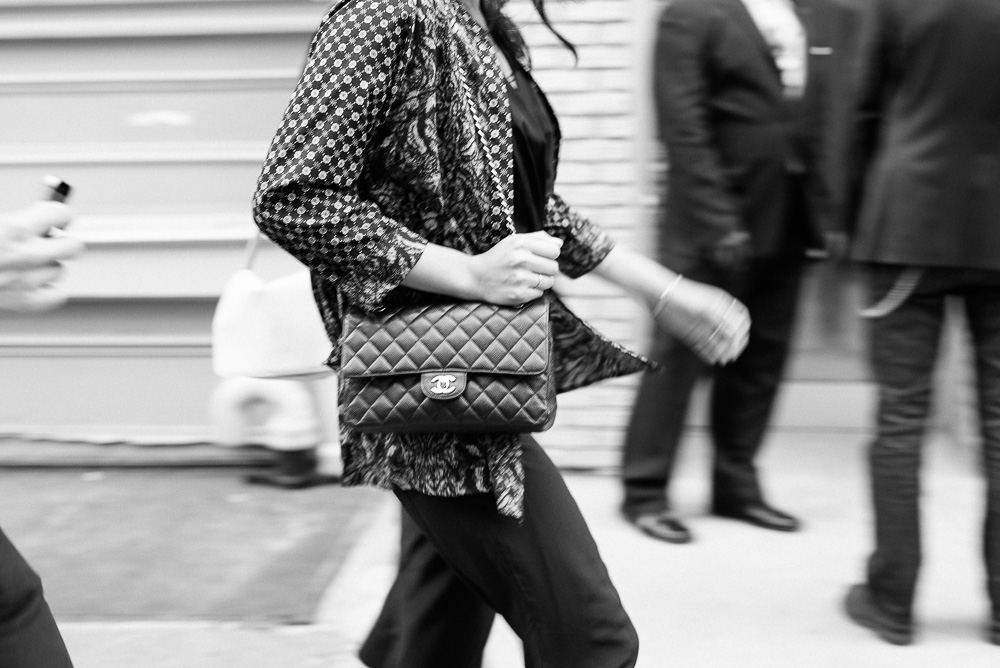 …And the Winner is?

Still here? Awesome, you guys are so much more patient than I am! So the answer to the question in the beginning, “WHICH ONE?” is likely a lot more complex than you realize, especially if you account for all the different variations the pre-owned retailers are now offering, albeit at prices that almost equal that of the new ones (or in the case of some Birkins, a lot more!). In fact, the easy answer here would be purchasing both a pre-loved Chanel (in fact, I’ve been really digging something like the Chanel x Pharrell Williams No. 5 croc-embossed tote), which would be a lot more financially sound than buying new at this point, while also getting a Birkin (oversized HAC for me, also like Pharrell, if I happened to be floating on money as I am in my daydreams).

But the reality is often much less float-y, and requires multiple sacrifices to get your hands on even the basic leather versions. Plus, depending on your personal preferences, affordabilities and styles, you may not actually like either style, and that’s perfectly understandable too.

But that shouldn’t stop us from indulging in imaginary battles between the two.

So, which side would you pick?