PurseBlog Asks: Which Trend Were You Wrong About? 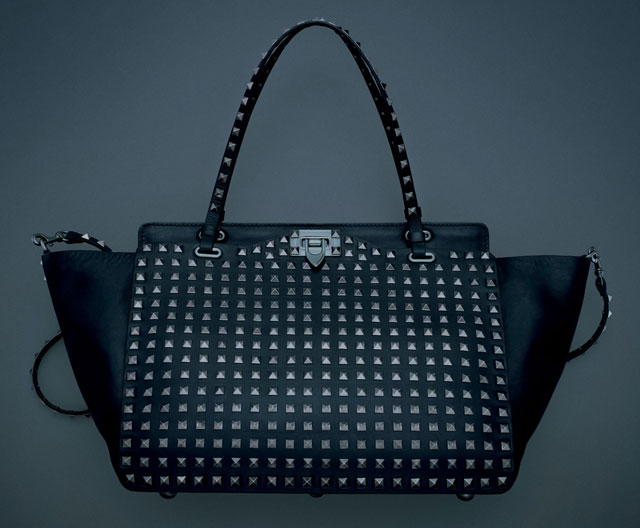 I’ve never liked admitting when I’m wrong about something, but when that something turns out to be a thing I enjoy that I had originally hated, that softens the blow a little bit. When it comes to handbags, the first things on that list are the Valentino Rockstud Bags.

When Valentino’s uber-successful line first debuted, it was with VaVaVoom bags during the brand’s Spring 2011 runway show. Valentino had been searching for its accessories identity for seasons, and it was beginning to feel like the brand’s then-fairly new creative directors might not find their groove. It felt like studs had been all over everything for years on end, and the finger-slips at the front of the VaVaVoom just didn’t quite make sense to me. (They still don’t, really, but the rest of the line is good enough to excuse it.)

A lot of you agreed with me in the comments on that initial review, but somehow, Valentino went on to tweak and expand the collection, making me and thousands of others into believers over the intervening three years. They’re surpassed “trend” and now seem like they’re headed toward “classic” – a bag that the brand can tweak and reissue to great customer response for years to come. I’m glad I was wrong about them.

Which bag or trend did you dismiss at first, only to come around to it later? Let us know in the comments.

You can shop Valentino bags via Net-a-Porter.

I still don’t like the Valentino Rockstud bags (or shoes for that matter). I like studs just fine, but there is something about these bags that doesn’t look “right” to me.

Totally agree! The studs look so cheap to me. I really dislike this bag.

Agreed. And they just won’t go away. It seems they had they’re moment, but I keep seeing them pop up in every color imaginable.

Six months ago I lost my job and after that I was fortunate enough to stumble upon a great website which literally saved me. I started working for them online and in a short time after I’ve started averaging 15k a month… The best thing was that cause I am not that computer savvy all I needed was some basic typing skills and internet access to start… This is where to start———–bestjob.com..,.,..

I adore the Valentino bags…and the shoes are some of the most beautiful ever made IMO…. The one bag that I was incredibly wrong about and now love is the Givenchy Pandora. When I first noticed them on line at Barneys I though “it looks like a square box with a handle”…”who would buy that”. When you see the Pandora with your things in it, well, it is just one of the most unique bags every made!

You guys are going to kill me but I couldn’t stand the Celine Trapeze bag at first! I still am not a HUGE fan but I have really fallen in love with a few of the color combinations and I can feel myself warming up to them more every season.

Neither the luggage nor the trapeze were love at first sight for me. I just couldn’t understand the appeal. Now I own both and want more!

Oh no! Yes I might actually have to kill you. Love the Trapeze; got me a beautiful calf skin burgundy one with royal blue suede gussets! Now, the Luggage, I am not a huge fan of.

I immediately dismissed the Celine Edge at first, but now I’m really warming up to it and looking to get one.

I was really hoping the Jesus sandal/Birkenstock was just a bad dream. Nope.

Platform shoes, I called them (and still do) Frankenstein shoes. Glad that they seem to be fading away a bit.

Saint Laurent. I see them everywhere online and on celebrities. I just did not think that bag would take off because, at least for me, it was dull, unexciting, and boring.

Agreed. When I first saw the Sac de Jour I immediately thought of it as a Birkin knockoff but the more I look at it, the more I like it. I don’t even like the Birkin to be honest, and I feel like the Sac de Jour is more practical and I love the accordion detail on the sides.

I thought the Chanel boy bag was a miss! Wow, was I ever wrong about that one. Even to the point where I would carry one around.