An Ode to the Miu Miu of the Early Aughts 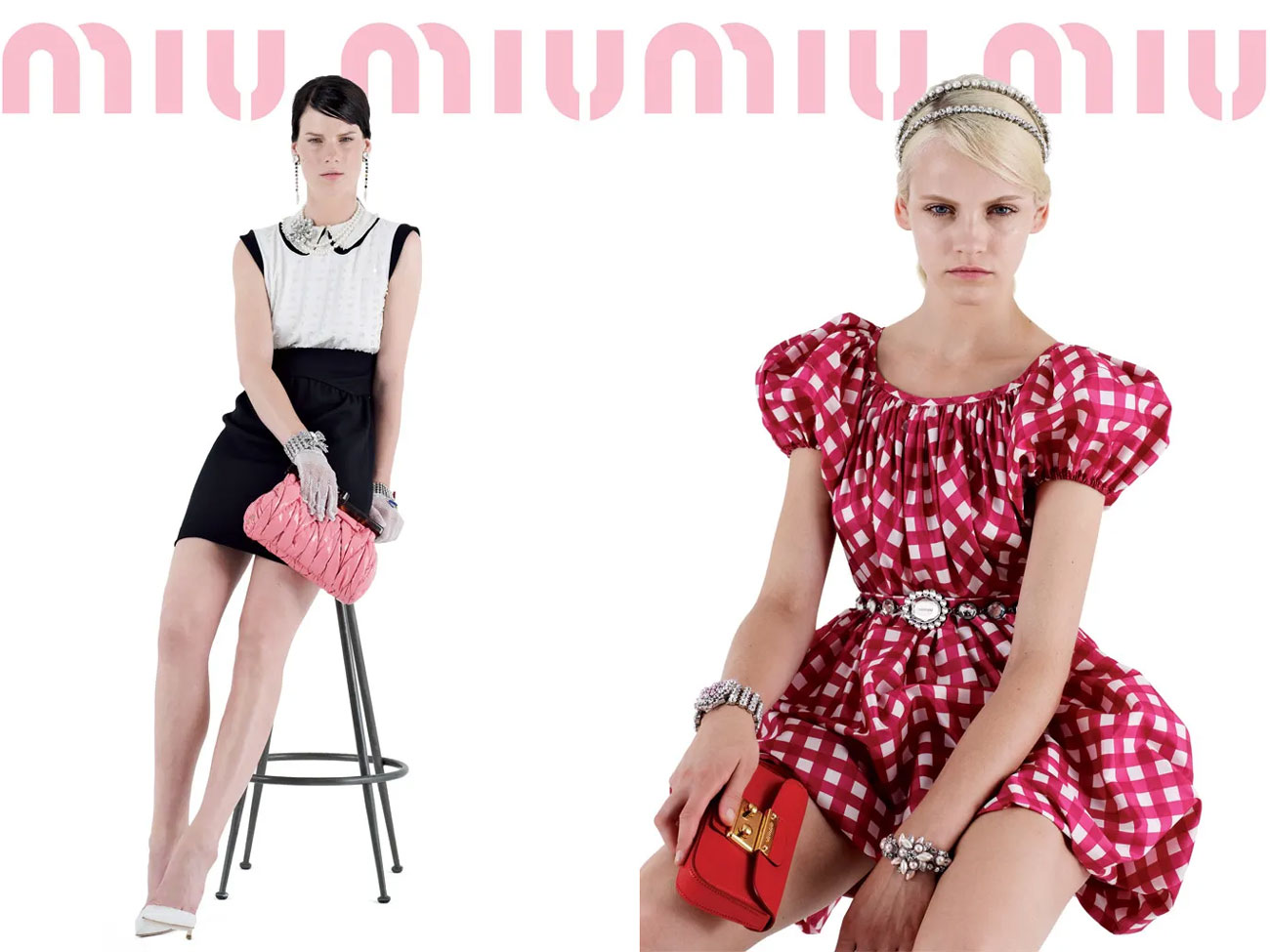 Recently, as I was dressing up for a college presentation, it struck me that I don’t really have a bag that can classify as “sleek.”

Don’t get me wrong, I love my Bal Work, and when paired with a tux, it exudes an off-duty edge that’s hard to beat. But the more I came to think of it, the clearer it became – I didn’t actually own anything that could be classified as “on-duty,” whatever that meant (although I suspect it means the Sac de Jour).

So, as I longingly discovered (yet another) SDJ-shaped hole in my closet, it also got me thinking. Of course, as purse lovers, we have a recurring habit of designing our outfits around our beloved handbags. But more often than not, it’s important to realize if said purses can be worked into our wardrobes.

And to a large part, whether or not a bag is well-suited to our needs boils down to the type of purses we tend to gravitate towards most often and how we juxtapose them with our outfits.
Some of us, for instance, may find a neutral purse with minimalist attire a match made in chic heaven. Others might opt for understated outfits with a statement-making handbag. A different segment (probably just me) rounds off (or maybe tempers down) bolder clothing pieces with more understated bags. Yet others might prefer loud and flashy everything, and really, who are we to judge?

My point is, though we needn’t restrict ourselves to any one category, we eventually find ourselves resorting to one of the above on the daily. And if we have a clearer idea of what style suits us best, it’s usually a good way to avoid impulse-purchasing bags. Socrates’ golden words say it better: know thy closet. Or thyself. Quite the same, really.

And this, dear reader, is the fundamental difference between the two brands, Prada and Miu Miu. Brainchildren of design genius Miuccia Prada, we often forget that the two lines originated for separate audiences with different aesthetics: Prada for the sleek, functional, and elegant, and Miu Miu for the youthful and the romantic. As Mrs. Prada put it, “Prada is very sophisticated and considered; Miu Miu is much more naïve.”

In fact, Miu Miu has always been the rebellious sister to Prada. Some find it ultra-feminine, others rather tomboyish. But at its core, it aims to be quirky, dressing the young and the young at heart alike with an eclectic mix of seamless prêt-à-porter, funky footwear, and cool shades. Plus, if you’ve been keeping an eye on the style scene lately, you’ll also know that Miu Miu has been spearheading the resurgence of the low-rise mini-skirt to the collective gasps of the fashion world! Miu Miu’s purses don’t disappoint, either. With recent hits like the ladylike Belle Clutch and the trendy Wander bag under its wing, the brand is certainly in its element!

But despite a shift towards Y2K-styled clothing and purses, the actual handbags of that era from the house of Miu Miu were in a class of their own. Perfectly encapsulating traditional design elements in a slew of lust-worthy styles in thick, luscious leather; ask any Miu Miu fan from the 2000s, and they’ll tell you: nothing beats ‘em!

So, for today’s installment of Throwback Thursday, let’s take a deeper look at some of Miu Miu’s bestselling purses from the early aughts.

How Miu Miu Began Its Journey 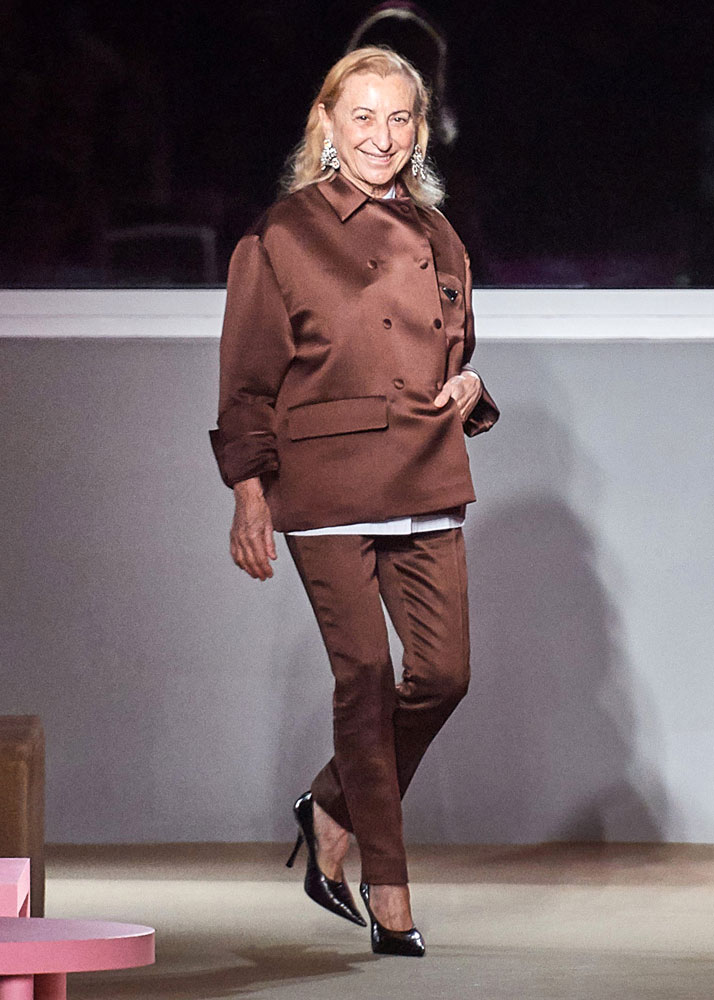 Miu Miu’s handbags and everything about the brand that makes it so darling to fashionistas all circle back to one person: Mrs. Miuccia Prada. So, it’s impossible to speak of the brand without alluding to its creative prodigy. Having trained and performed as a professional mime, Mrs. Prada only joined her grandfather’s trade in 1978 as an accessories designer, soon wowing us with hits like the nylon backpack.

But to experiment with a heritage house like Prada, which had been reliably (and profitably) operating since 1913, was a daunting and risky task. Thus, Miu Miu, christened after Miuccia’s family nickname, was formally launched in 1993 to explore new grounds within the realm of fashion.

And explore it did: its debut runway show at New York Fashion Week starred Kate Moss – arguably the most sought-after face of the 90s! Celebrities like Drew Barrymore, Chloë Sevigny, Maggie Gyllenhaal, and Madonna were snapped in its buzz-worthy offerings, and its highly youthful campaigns immediately drew in audiences.

By the early-2000s, it was evident: Prada may have been a polished, minimalist force, but Miu Miu was certainly the coolest kid in town!

The Hottest Miu Mius of the Y2K

Many mistook Miu Miu to be a diffusion brand to Prada, and it’s easy to see why. Often retailing at a lower price point, sometimes in similar silhouettes to their dearer sisters (albeit in more playful versions), Miu Miu did, at times, exhibit diffusion line-like characteristics (although current prices would surely put such errors to rest).

Did it mean, though, that the brand only played on Prada’s house codes without any defining design elements of its own? Not at all! Rather, celebs of the early aughts simply couldn’t get enough of the brand’s must-have Matelassé, and the bags from the era certainly attest to it! So, without further ado, let’s take a look at some of the most covetable Miu Mius from the 2000s! 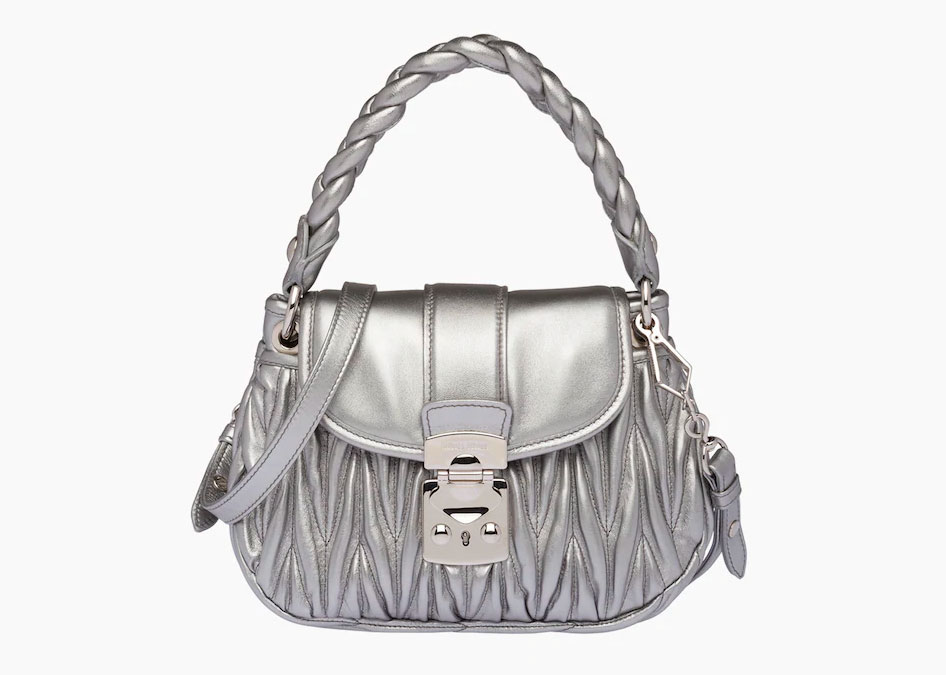 It features an intricate quilting technique – a rich series of ridges and valleys that yields a thick, padded appearance- matelassé leather makes Miu Miu instantly recognizable. And arguably, the finest culmination of the style is seen in the brand’s Coffer Bag. With a sizeable braided top handle that easily fits under the shoulder, and several utilitarian pockets quietly buried under the quilting, the Coffer style was the ultimate Miu Miu of the Y2K and a fave among stars like Isla Fisher, Anne Hathaway, and Jessica Alba.

In fact, owing to its iconic cache, a loyal fan base, and a long list of nostalgic admirers who’d only drooled over its tabloid shots, the Coffer was updated and reintroduced in 2018. You can run to your nearest Miu Miu outlet and get one right now!

Besides the Coffer, the Matelassé was also prominently featured on other styles, such as this oversized clutch Rihanna is rocking. Let me tell you, this wouldn’t look the least out of place among all of today’s puffy, pillowy purses!

While the Coffer was all about feminine elegance, the Bow Satchel (and every other style in the Vitello lineup) oozed tough, retro-chic. Honestly, I briefly considered the Bow while hunting for the Balenciaga Motorcycle, and you can see that aesthetically, they’re not very different, especially when it comes to the more lived-in, distressed versions.

That, however, doesn’t mean that the Bow couldn’t be refined – in lighter shades like baby pink or ivory (and given that it isn’t beaten up), it could put some of its Prada counterparts to shame! With a fold-over top, gorgeous calf leather, and cool gold hardware details, the Bow can still be an everyday purse fit for the New Yorker. 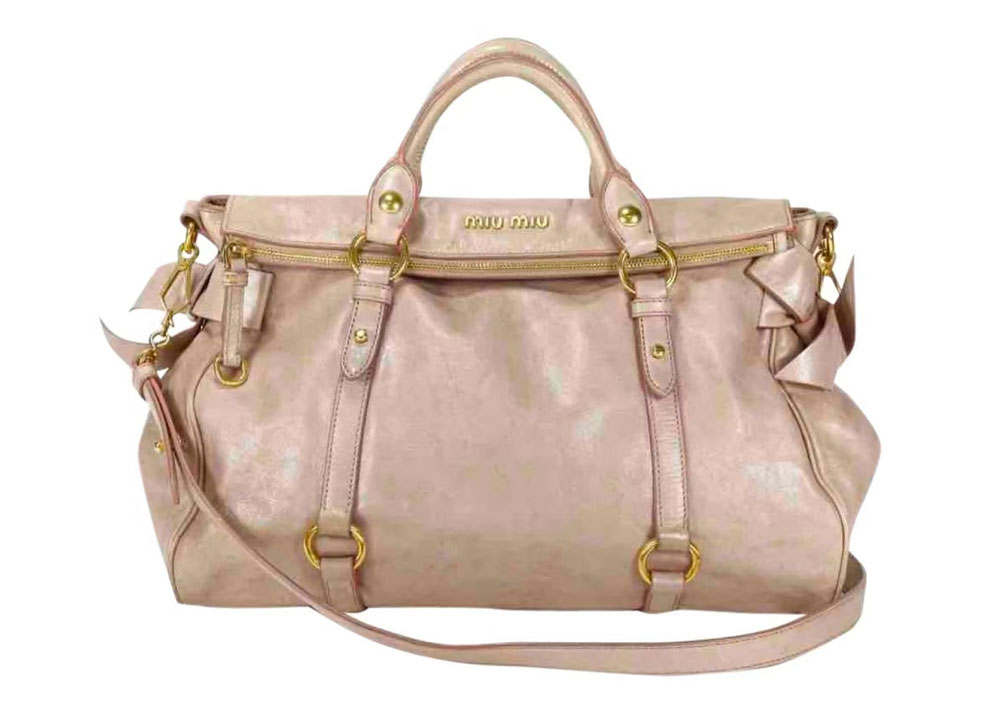 The Madras is a recurring favorite, both of supermodel Miranda Kerr and here at PurseBlog, and the best part is, it continues to be a well-selling piece for the brand even now. Unlike the Coffer or the Bow, the Madras was introduced sometime in the late-2000s and is significantly more minimalist, almost in the veins of Prada.

But just because Miu Miu “grew up” a little with the Madras doesn’t mean it’s not fun. Quite the opposite, as the collection continues to be reinvented in fun pops of color, leathers (including a signature Matelassé rendition), and various silhouettes, like a top-handle, crossbody, and tote. 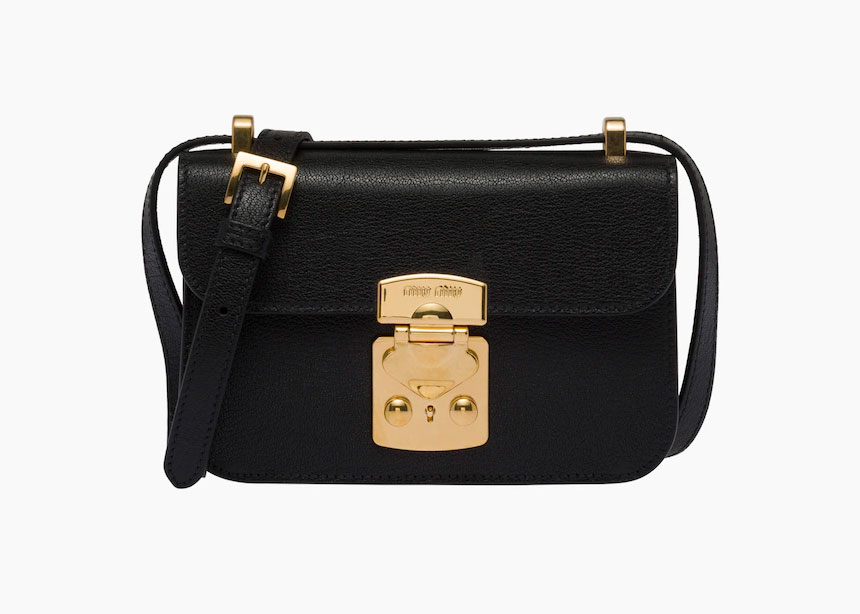 One of my favorites among vintage (and nearly-vintage) Miu Miu pieces is the Nappa Cloquet Top Handle, featuring the Matelassé in a spacious, more streamlined silhouette that can double as a work-and-play carryall. Little else is known about it, but Mean Girl Rachel McAdams agrees.

Most brands tend to have that one design that sparks controversy, and for aughties Miu Miu, this was the Harlequin. Made from patchwork leather in sometimes wild color combinations, including metallics, the Harlequin alternately is fondly-remembered and also sends shivers down the spines of Y2K fashionistas. 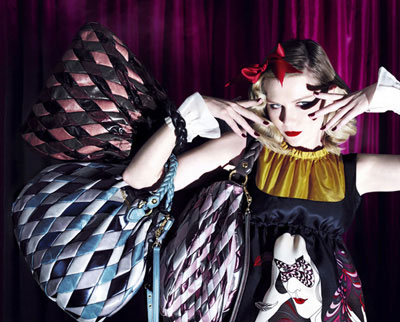 A Word of Caution about Resale

I’ll be blunt: despite the vintage trend showing no signs of subsiding, Miu Miu’s performance, at least as far as handbags are concerned, isn’t so great. In fact, you can get yourself a well-maintained Coffer for as low as $200, while Bow Satchels (depending on their conditions) can go even lower.

What could be the reason behind this? Some blame quality issues – the Bow, in particular, is prone to color-fading or edge paint-cracking, while most matelassé offerings tend to be heavier. After all, thick, smooshy leather does have its downsides too.

Plus, before the low-rise mini-skirt picked up steam, most Miu Miu collections tended to fly under the radar, and even the reintroduction of the Coffer was only talked about among loyal Miu Miu fans, whose numbers have been dwindling since the 2010s.

The upside, however, is that 2022 is the year of Miu Miu. Not only did its newest runway shows leave audiences and critics impressed, but its newest handbag offerings – the age-old matelassé updated to trendier silhouettes, as seen in the brand’s most recent holiday collection, have revived the hype around the brand.

Most significantly, 2022 has shown us that Miu Miu can hold its ground, and sometimes even dominate the charts, over its elder sister. With its quintessential matelassé coming back in a big way and its ability to generate buzz with its playful, edgy looks and offerings, the brand has dismissed all notions of it ever being “just a diffusion line of Prada,” reappearing on the radars of fashionistas all across the world. And that makes me immensely hopeful about its Y2K handbags – who knows, perhaps the Harlequin might become the next hottest vintage accessory to clamor for!