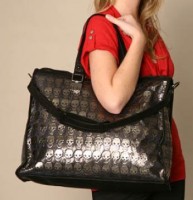 This is the first week of school here in Athens, Georgia. We are, of course, home of the University of Georgia and, since it’s mid-August, it’s time for the 35,000 students to show back up in town, like the swallows to Capistrano. Or something. It also means that I practically get a free post: it’s time to write about my favorite school bag of the season! These kinds of things write themselves, folks.

And this year, there is little to no competition. The Treesje Mortale Travel Tote is easily my favorite and definitely what I would be carrying, were I to be hauling my rear end up and down the nearly two-mile-long, hill-laden campus that resides mere minutes away. 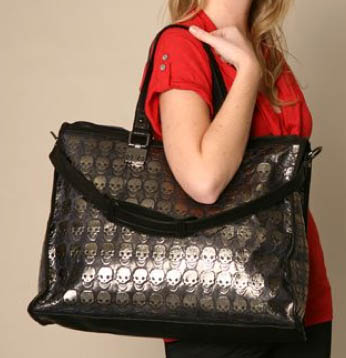 And perhaps the only thing that could convince me to go to grad school would be to find a legitimate reason to buy this gorgeous bit of gothic glamour. I wrote about another bag from this line some time ago, and I still cannot get over how unbelievably cool and subversive I think it is.

The tonal, metallic skull pattern has probably been done, honestly. Alexander McQueen started all of that nonsense over a year ago, and a lot of it has come and gone, but this tote still looks fresh to me. Its simplicity is probably vitally important to that fact – rows of angry skulls in a neutral, unobtrusive color scheme are far more modern and less obvious than the white-on-black skull patterns that remind us all of the pirate flags of yore. Turning the skulls into something graphic and modern is the key to this bag’s overwhelming success. Buy through Luna Boston for $590.