It’s Halston Heritage vs. Hunter in a battle of the H logos 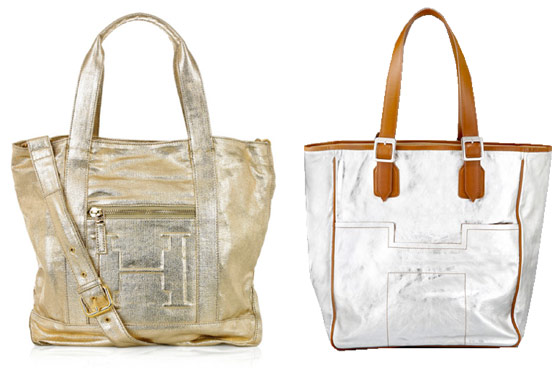 An H is a great letter to have as a logo; it seems to have worked out just swimmingly for Hermes, after all! But two just-launched handbag lines are also trying to appropriate it for use as a brand symbol, and their approach is perhaps a bit too similar.

The Halston Heritage Metallic Cotton Tote actually uses a double H, as the brand’s name would indicate, and the Hunter Saratoga Metallic Tote just uses one. They’re both big, metallic everyday bags that use an H as their prominent feature, though, and I can’t say I’m in love with either of them. Which do you prefer, and should one or both of the brands be trying a little harder to think of a better logo for their bags?

I don’t really like either of them, but the Halston Heritage would be my pick from the two because I don’t like the color of leather the Hunter used on the handles/edges paired with metallic. I also tend to pick gold over silver.

I could never understand why anyone would find a metallic bag attractive. Some glamorous evening silver or gunmetal leather clutches look OK. But a huge, gold metallic Cotton tote? Please! What can be more tacky than this, even with an “H” on the front? I’m just saying…

I love metallics so I would wear one any day of the week. I would go with the Halston Heritage bag. It looks more luxe. The Hunter looks cheap.

Haha, this is so funny! I love Halston, and I think they so the metallic so much better!