On first inspection, I like the Catherine Rapetti Jojo Clutch just fine. It’s cheerily purple and would go with a black dress just fine and I like foldover clutches in general. Overall, it’s an easy look to rock.

But then I looked closer, realized how much they were asking for such a simple clutch, and thought to myself, “Who is Catherine Rapetti and why does she think this clutch is so freakin’ special? Because it’s not.” So, uh, anyone have any ideas? 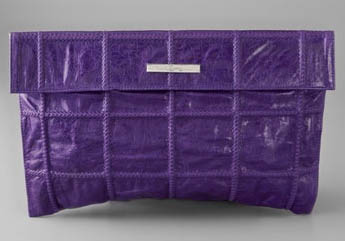 Since we are, ostensibly, a blog devoted to being mindful of a good value when shopping for luxury handbags, I have to ask – what makes this clutch $396? The leather looks absolutely mediocre, the style is one that’s already been done by everyone, and the purple is a little too light for fall/winter. So what gives?

I’m not sure. I think I’ve heard of Catherine Rapetti before, and her design work seems perfectly acceptable, but she hasn’t built up the kind of cache and following that she needs in order to start overcharging based on her name alone. I get that independent designers have to upcharge a bit because their pieces are made in smaller batches, but this still seems excessive.

Which is not to say, of course, that there’s anything really wrong with the bag itself. It’s fine. But I need a lot more than fine to pay that much for a simple clutch from a designer that I don’t already trust. Buy through ShopBop for $396.