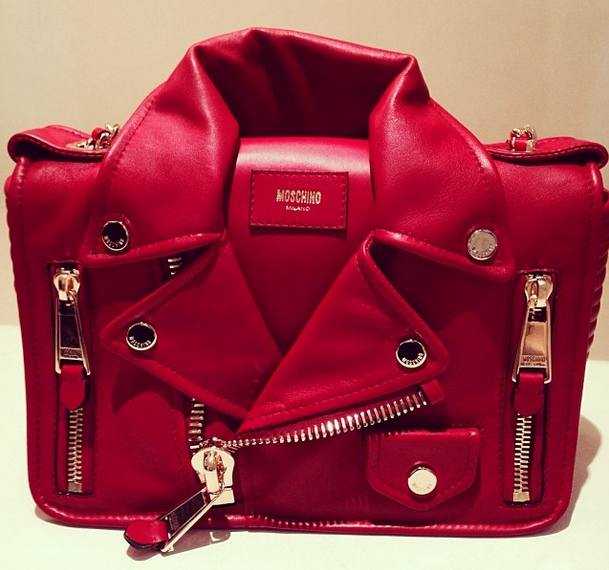 Jeremy Scott is known for his somewhat flippant regard to both form and function when it comes to designing his zany, exuberant eponymous line, and now that he’s the new creative director of Moschino, we can expect more of the same from the Italian brand. Scott is, in many ways, a perfect for Moschino, a brand that likes the silly and literal as much as any other major fashion line that comes to mind. With all that in mind, I suppose that the Moschino Motorcycle Jacket Bag isn’t all that surprising.

Of course, it is a little surprising when you consider that a jacket is not, in fact, similar to a bag in any way, other than the fact that some jackets include both leather and zippers. (Unless you’re Amish. Then, no zippers.) This bag, which comes from Moschino Pre-Fall 2014 and appeared on Vogue’s Instagram earlier in the week, has both, plus a collar and plenty of shiny silver snaps to hold it down. In a way, it’s also a bit of a clever play on a logo bag; instead of printing the brand’s name directly on the leather somewhere, you can instead see the “jacket’s” interior label peeking through. It’s a piece intended to attract attention to the brand’s new creative direction, and that’s just what it’s doing.

People with too much money and very literal senses of humor will probably love this bag, but that’s not entirely contrary to some of the popular bags we’ve seen pop up over the past year (see: almost anything from Charlotte Olympia). If asked to love it or leave it, I’d definitely be leaving it. How about you?

It would have been better left as a jacket.

I would leave it, too. This as a real jacket would have worked perfectly. In all honesty, it looks like one of those cheap bags sold at mall kiosks.

Haha I kind of love it

I die for it! Anyone know how much yet?

Ha! Ever want to start a conversation? Carry THIS. I get into it.

The problem is that Moschino does not have enough power in the bag market – were these bags made by Chanel they would be snatched up like hot cakes. The comment that Chanel logo clutch is clever is this not just adds, imho, to this proposition.

0
Reply
Anna B
Reply to  or

Chanel also has made a jacket bag.

super cute idea but I don’t think i’d wear it!