PurseBlog Asks: Do You Carry Your Dog in Your Bag? 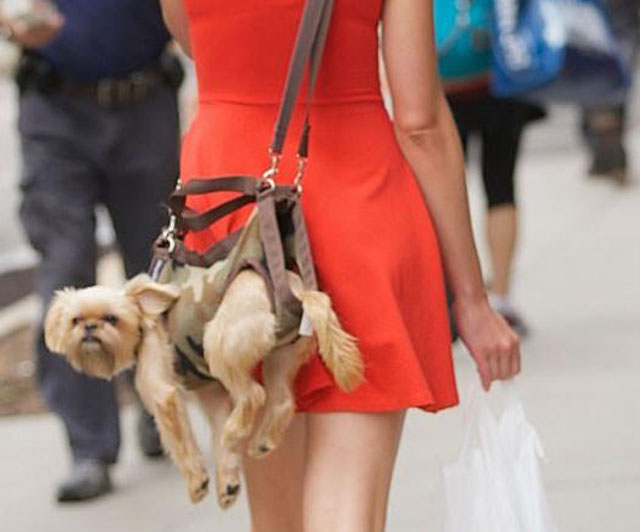 Ok, so I’m going to level with you here. It’s Friday, it’s the end of summer, and I just wanted a reason to post the above hilarious picture of a Manhattan woman carrying her Brussels Griffon in what can only be described as a camouflage (on trend!) crossbody pup-sling. The picture appeared in the New York Post yesterday and caused me to laugh for approximately a full minute. The accompanying article doesn’t include any information about the woman or her dog, but there’s just so much going on in that little dude’s face. (I’ve decided he’s a dude.)

Before I moved to NYC a couple of years ago, I never understood the allure of carrying your dog in a bag. Dogs are heavy, and even the tiniest ones start to feel heavier after a while. Plus, they have legs! They have legs and they walk. Now that I’m here, though, I get it. Sometimes they don’t walk in the right direction, and when people are moving quickly on a crowded sidewalk, a dog suddenly stretching his leash across the flow of traffic (something dogs are wont to do) to dart after a bodega cat is a hazard waiting to happen. Also, even small dogs have to be inside a bag or carrier to board the subway, so if you have a small one, you might as well just get an oversized purse and be done with it. One less bag to carry.

I’m not an expert, though – I’ve never had a dog that weighed less than a sturdy eight-year-old child, so dog-bag decisions are not a decision with which I’ve ever had to contend. Do you carry your pup in your purse? If so, do you have a special bag for dog days, or do you just plop that lil’ nugget into your designers bags with confidence?