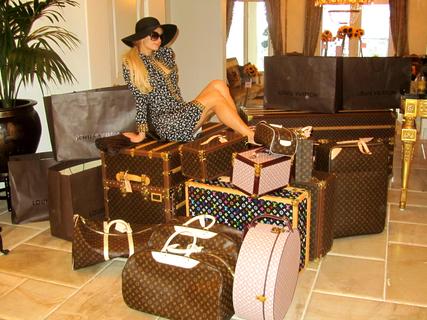 Apparently heiress and celebutante Paris Hilton, like, just now heard about this whole World Cup thingy that’s going on over in Africa or wherever. Paris doesn’t appear to understand exactly what the World Cup entails, since she thinks it requires her to bring every piece of Louis Vuitton luggage on the planet (presumably to hold all of her rhinestone-encrusted vuvuzelas), but she’s going anyway. Has anyone told her that the US was already eliminated?

I know that Paris doesn’t seem all that quick on the uptake, so it doesn’t particularly surprise me that it took her over two weeks to figure out that, hey, there’s a world event going on! A lot of cameras are there! It’s sort of like Cannes, but with balls! [Insert Paris Hilton/balls joke here.]

Ok, maybe I’m just jealous. Of her trip to the World Cup AND her Louis Vuitton luggage. And also, her proximity to hot soccer players. Yes, that’s what stings the most.

UPDATE: We now know why Paris needed so much luggage – to hold all of her weed.

I think she made you mad lol

I hope she doesn’t read the Dana Thomas book, Deluxe: How Luxury Lost it’s Lustre. If she does, she’ll quickly discover that all that plastic LV luggage is only somewhat worthless.

Hmm, it looks a bit like an ad though? I mean, there are LV shopping bags and big, huge trunks…

It’s all LV, but it’s not matching luggage. It looks funny!

Wow, apparently it’s Paris’s job to carry all of the uniforms and balls. Why else would she need so much luggage?

Samantha you are spot on. It’s most likely an ad for the Hilton in Paris France.

Yawn… Just another photo opp for her. One piece of LV luggage doesn’t get attention, but an entire store’s inventory attracts a lot of attention.

I am really allergic to this person! Ugh!

she probably saw LV’s main website and saw the likes of Pele and Maradona featured and asked some questions – now I’m sure she’s football’s #1 fan.

did LV pay for her trip?? LOL