Hey MCM, Donna Karan called. She wants her bag back.

I’m a firm believer that there is nothing really new under the sun, and that well-worn Biblical adage is doubly true when applied to the fashion world. Everything is recycled, reinterpreted, or deconstructed, if not outright ripped off. The best designers manage to borrow from the past and create something new and interesting from their influences. The worst? Well, we might have an example of one of them here in the MCM Leather Crossbody Hobo. When I saw it, I couldn’t help but assume it was one of Donna Karan’s bags – her brand used EXACTLY the same dying technique on several bags last season. Obviously, I was mistaken. 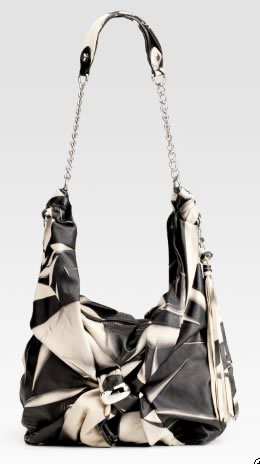 Take a look at this bag. Also, this one. Now look at that bag up there. Those Donna Karan bags were released in the fall, which means that they had been in the industry pipelines for about six months after their initial presentation for buyers and editors. So, knowledge of those bags has been around for about a year, long before this bag was probably conceived.

Fashion’s timeline is wonky, and this could be an unfortunate case of the company sourcing the same leather in ignorance, but that’s just not passing the truth sniff test for me. In a competitive industry that values exclusivity so highly and where lead times are so long, you’d have to think that the Powers That Be at MCM were probably aware that someone else had used the exact same leather with the exact same effect in the exact same color scheme. Karan’s bags were all over the internet and on the websites of several of the industry’s largest retailers at the time that these bags were probably being designed, and if MCM wasn’t aware of them, then someone was seriously not doing his or her job.

Don’t get me wrong – I love this effect. I just loved it more when it felt original. Buy through Saks for $1195.

Purseonals: The Fendi Petite 2Jours Leather ShopperI've Been Favoring My Leather Bags LatelyThe Best Hobo Bags At Every BudgetLove It or Leave It: the Return of the Hobo
Amanda Mull