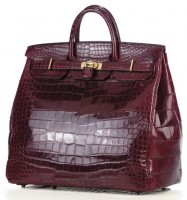 We have a treat for your eyes! Hermes has become ubiquitous with the ultimate designer handbags. The luxury associated with Hermes is known worldwide, continues throughout the years and seasons, and transcends across generations. My collection of Hermes bags is small, but includes all Holy Grail bags for me; a Blue Jean Birkin, a Kelly Wallet in Orange Alligator, and my stunning white Kelly Longue. Next on my wishlist from the brand is a travel size bag. Something big, something to take for weekend trips, something reminiscent of what the brand is known for but offering a new shape to my collection. Top of my list is the Haut A Courroies, better known to the masses as the HAC. And the ultimate HAC from Hermes would be the crocodile HAC that was at Christie’s.

The rare dark red crocodile Hermes 45cm HAC was made in 1972. The bag was given to Christie’s to be auctioned, and was said to be sold for a reported $40,700. The price was not out of this world, as many Hermes items that are rare may go for much more. The Crocodylus porosus is an exotic staple of the house, highly sought after, highly stunning, and highly priced. Not that going without an exotic version would be settling, but I would settle for a leather HAC that could be used as a travel bag. Find more Hermes items at Christie’s to tantalize your handbag obsession and love. Via Christie’s. 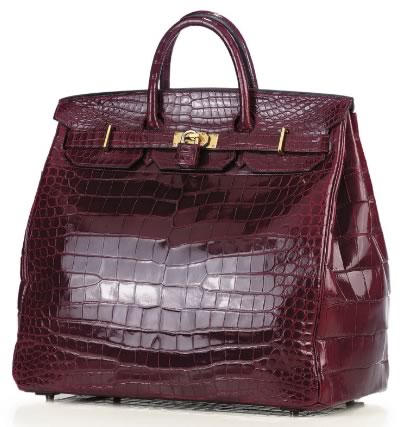