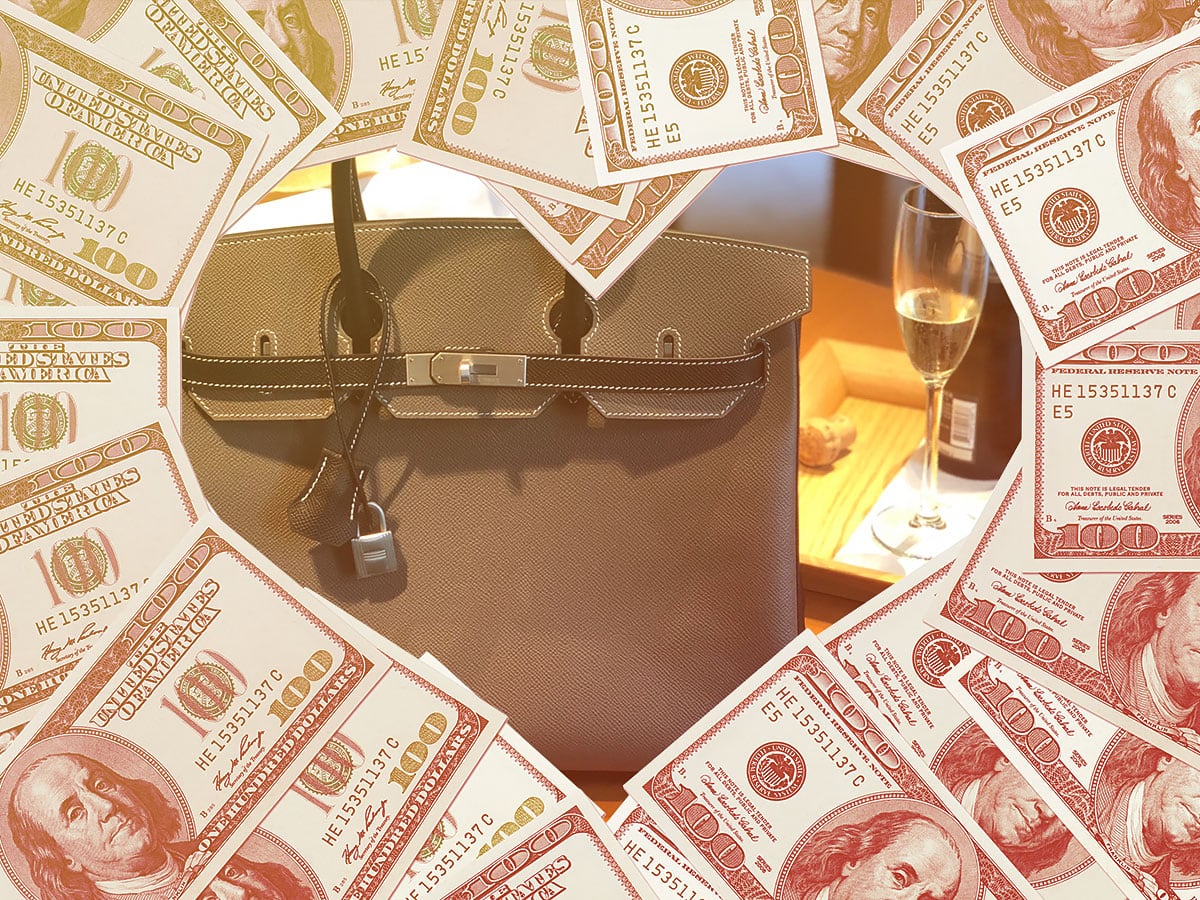 The reader response to our first edition of Closet Confessionals was overwhelming, and this week we’re back with another anonymous look inside the closet (and budget) of an anonymous reader. This week, we’re talking to a creative professional in his mid-20s about how he became a handbag expert and what he does to afford his rotating lineup of ultra-expensive handbags—especially Hermès.

For years, we’ve heard readers and friends wonder about how people manage to afford their bag habits, so now we’re trying to find that out, one person at a time. You can learn more about that effort in the introduction to our series, and if you want to share, you can do that by clicking the link below. All your personal details will be kept anonymous!

Submit Your Own Confessional

Are you a PurseForum member? No
How many bags do you own? It varies because I’ll buy and sell them, but right now 12
How much is your collection worth? $25,000
What is your most expensive bag? A 40cm Hermès Birkin. I had a 40cm Rubis Togo Birkin from 2010 that I got as a perk in my last employment contract (I know, good perk). After I left that job, I sold it on eBay for $8,150, and that same day bought a 1995 40cm Toile Birkin for $3,500, which was then custom painted. I’ve been told it’s worth close to $15,000 now.
What are the most important brands or pieces in your collection? My previous job was as an Hermès expert at an auction house, and it is now very clear to me that Hermès bags are just the best. I only look to buy Hermès bags and was so excited to be able to special order a Birkin from Hermès last fall, so that will be my next big purchase, whenever it arrives! (35cm Black & Etain Epsom Birkin with brushed PHW and white stitching). The only thing other than Hermès I’d buy now would be some Louis Vuitton Monogramouflage. I had the canvas Treillis bag and sold it! Regrets!
What’s currently in your collection? Right now, I have an Hermès vintage 28cm Black Calf Box Sellier Kelly with gold hardware, which I just found through a Japanese dealer on eBay for cheap! I have an Hermès Etoupe canvas Garden Party that I painted camo. My workhorse bag that I’ve had for years is a yellow (it started out nude) Proenza Schouler Python PS1 that I got on eBay on my birthday a few years back. I also have an Hermès canvas Evelyne II that I painted camo, a black canvas Herbag TPM, a 40cm vintage canvas Birkin with Gold Courchevel trim that is also painted camo (I’m on a bit of a camo kick lately), aaaaaand (drumroll please) my Special Order Birkin came in ON MY BIRTHDAY last week. It’s a 35cm Black and Etain Epsom Birkin with white stitching and brushed palladium hardware. I also have a few Birkins at home that belong to my clients, waiting to be painted.

How often do you buy new bags? Never, I only buy bags on the secondary market (accept when I can get Birkins or Kellys from Hermès). Usually I can’t go two or three months without impulse buying a bag.
Which stores do you frequent the most? Fashionphile, The RealReal, and eBay are basically it, along with auctions.
Do you sell old bags to pay for new purchases? Of course, I could never keep them all. Sometimes I think about how incredible my bag collection would be if I had kept everything, then I think about how much money that all would have cost! Most of the time I’m at my spending limit, so I have to negotiate and trade with myself, like, “I really want this Birkin, so I’ll need to sell a Garden Party and an Evelyne to make up for it!” Usually I’ll sell on eBay because I can negotiate directly with the buyer and the total fees are only about 13%, but if it’s a big money bag like a Birkin or Kelly, I’ll usually choose auction. Even though it’s usually six months between consignment and payout, the results can be really high and I can often get a small advance up front.
Who influences your buying decisions? I love my own taste, but I cannot deny being influenced by the Kardashian/Jenner/West clan from time to time. All their Monogramouflage makes me very jelly.
Are sales associate relationships instrumental to your shopping? Only at Hermès, where you cannot get Birkins or Kellys without one. I treat my SA they’re like my best friend and tell her all sorts of elaborate stories to keep her thinking about me. It’s gotten me some incredible bags! Without buying much else, I’ve gotten a limited edition Kelly, a Special Order Birkin someone didn’t come to pick up, and I was able to order my own special Birkin, all in about 18 months!
Are there any purchases you regret? Yes, and I’m very quick to get rid of something when I regret it. Back in the day, Ugly Betty was my favorite show on TV, and there is an episode in the first season called “Swag,” where Marc covets this 85th anniversary Gucci velvet Jackie bag. It’s one of the best episodes, and the whole thing revolves around this bag. So a little over a year ago, I see one pop up on a second-hand site for cheap, like $250, so I bought it, I couldn’t control myself! It arrived and I immediately was like, “What was I thinking, I’m never going to use this.” So I threw it on eBay that day and got about $200 for it. I guess it worth the $50 to have the satisfaction of owning this bag for a day!

Who pays for your bags? Me.
Do you set aside a budget for your bag purchases? Not at all, I know I cannot control myself. My budget is my credit line(s). I know I’ll be able to liquidate enough to pay for anything I might splurge on. (I’m not splurging on any croc Birkins, though.)
Have your shopping habits ever worried you financially? A few times I have nearly drained my bank account to buy a bag and shortly afterward, a big financial obligation popped up. Luckily, bags are very liquid and I never had trouble quickly reselling what I had just bought!

Have you ever purchased a counterfeit because you couldn’t afford a designer item? No, that’s why I buy pre-owned.
Do you ever hide purchases from your significant other? My boyfriend doesn’t know or care. He has some vague idea that I buy and sell so everything just about evens out, and he doesn’t worry about it when he sees new bags around, if he notices them. It’s all my money anyway.
What’s the craziest thing you’ve done to afford a bag? I have a good credit card and don’t have to worry about paying things off for six months, which is always enough time to sell other bags, or resell the one I bought!

The Rest Of It

Any other expensive hobbies or passions? I have the collecting bug, and there are plenty of other collectibles that call out to me, like Supreme or Victorian Majolica. But until my budget expands dramatically, my focus will be on bags. The only other thing I’ll spend big on is travel.

What was it like being a professional handbag expert? How did you become one? I started buying and reselling clothes and accessories when I was about 12 (my parents gave me $100/month of spending money even through college, so I had to learn how to make that work for me). By the time I left college, I had a really strong grasp on the whole secondary luxury market, and there was an online resale startup that I thought was very promising. I contacted their management with some ideas of how they could improve and they moved me out to San Francisco to work for them the day after I left college. That is where I got my first serious hands-on experience with bags and started to focus my expertise on Hermès.

The company moved me to New York, and I became interested in an auction house in the city that had a department specializing in Hermès. I saw an article about the director of the department and immediately knew I wanted to work for him. So I sent him an email, and after one conversation, our mutual Hermès appreciation was obvious, so he offered me a job as a cataloger. This is where I saw more Hermès bags than you can imagine, and my expertise grew and grew every day. Shortly after I started, I was promoted to Consignment Director and Senior Specialist, so now I was going into people’s closets, meeting with clients every day, and really spending all day, every day immersed in the Hermès secondary market. There is really no way to become an expert in Hermès (the brand or in authenticity) without simply seeing thousands of bags and being able to examine them inside and out.
I left that auction house earlier this year and started my own business custom painting on Hermès bags (I’m also an artist), so in addition to my own collection, I often have other people’s bags at my house waiting to be painted.