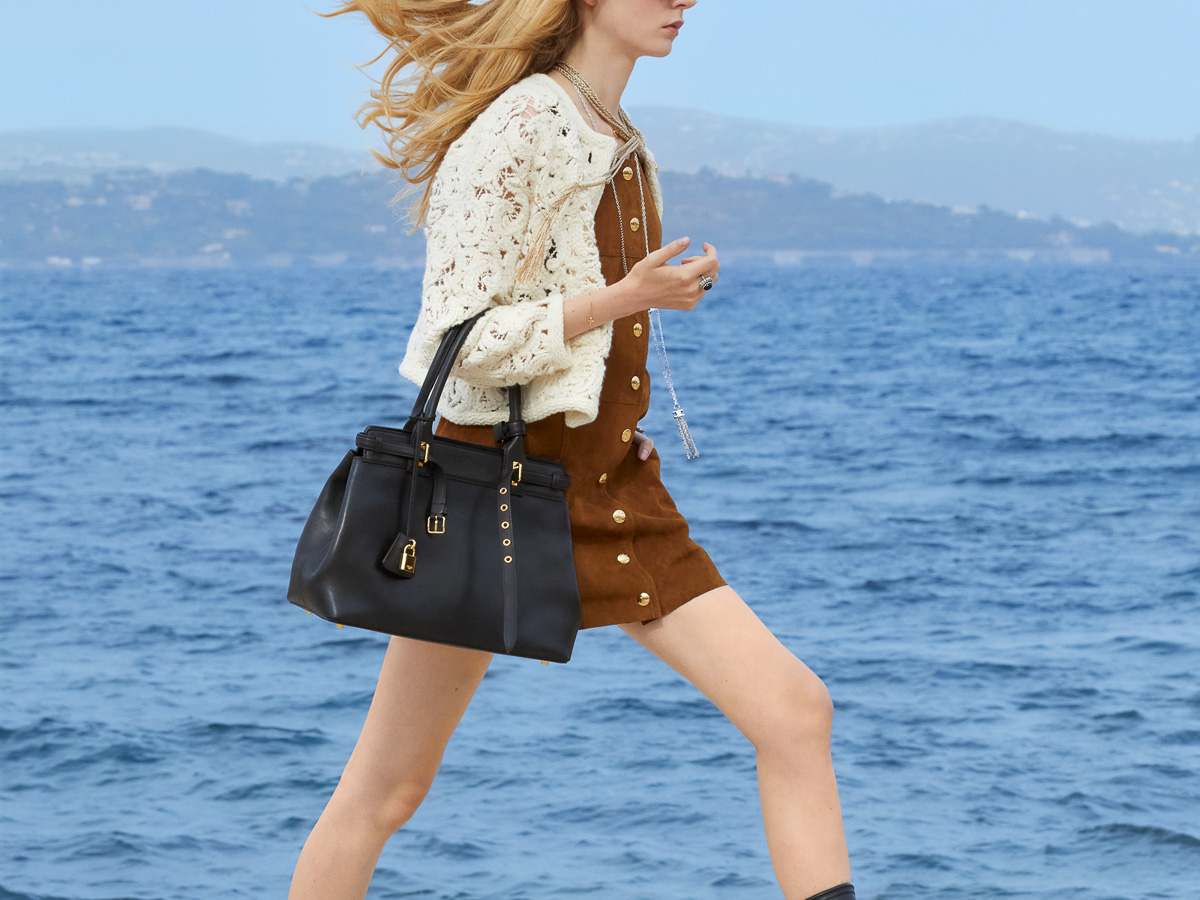 In 2011 Hedi Slimane released Anthology of a Decade, a collection of photographs taken from 2000-2010 that were a quintessential representation of the turn of the Millenium. Those who came of age during the 2000s will remember the decade for its angsty fashion trends. Think skinny jeans, rocker-chic moto jackets, and the advent of the supermodel off-duty look.

Largely influenced by music, fashion, and culture, Slimane’s compilation of a decade of work covered both his early days at Saint Laurent as well as the period of time during which he took a break from fashion to focus on photography, traveling the world to document youth culture.

Now, Hedi Slimane taps into that former life with his latest collection for Celine, which is said to be a renaissance of the designer/photographer/creative extraordinaire’s 2000s era. Dubbed La Collection de Saint-Tropez, the Celine Summer 2023 collection, while filmed in October, debuted earlier today. Given its inspirations, the pieces are not all that surprising.

Against the stunning backdrop of Saint-Tropez, Models strutted the runway in chunky moto boots, mini skirts, leather jackets, and skinny jeans. Yes, you read that right, skinny jeans. As for the bags, the new Celine Matelassé Monochrome appeared on the runway as well as the new House staple Triomphe. The real standout, however, is a brand-new bag from the House.

Designed by Hedi Slimane with the 2000s in mind, the latest silhouette from Celine is called the Conti bag. Described as a relaunch of the Cabas bag from Slimane’s London period, this semi-structured silhouette is meant to be worn in the crook of the arm. Offered in an array of colors and materials — there are supple leather versions as well as suede and polished crocodile, the Conti bag is worn relaxed with its belt buckle slung open. Discover more from the runway below. 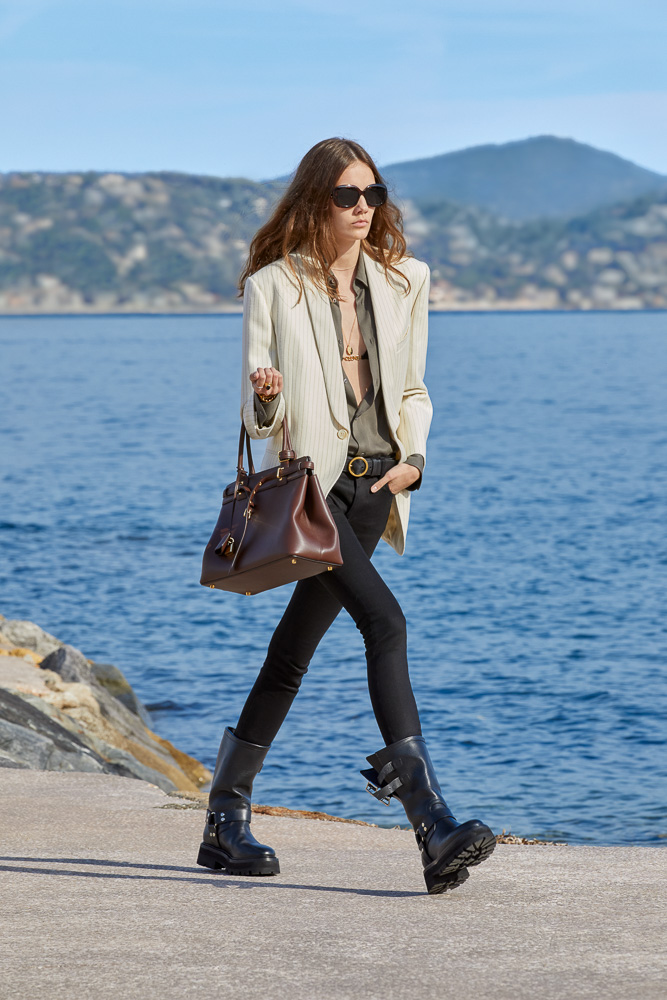 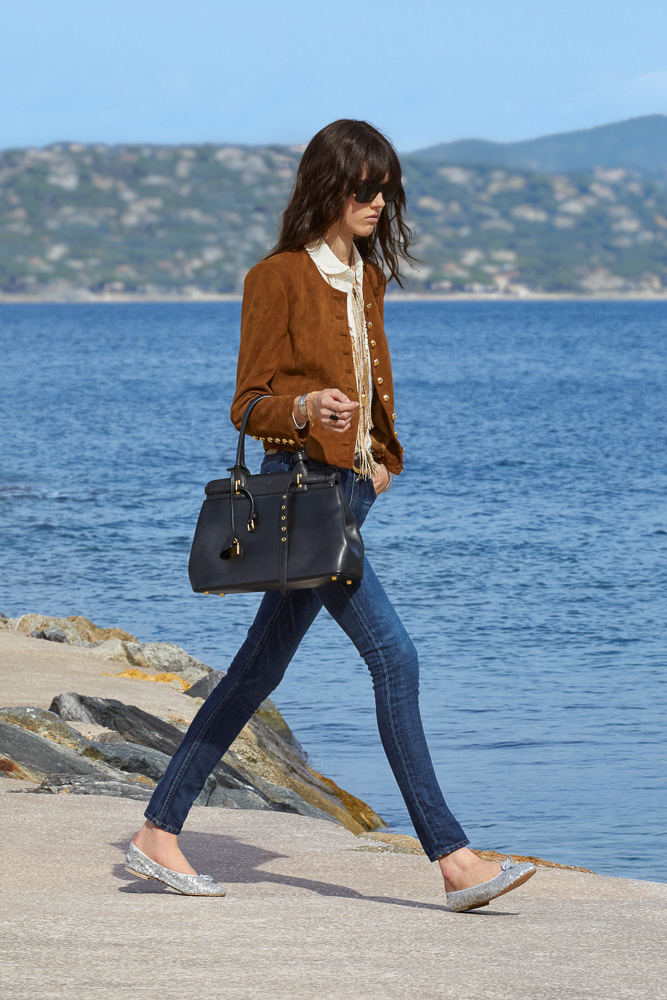 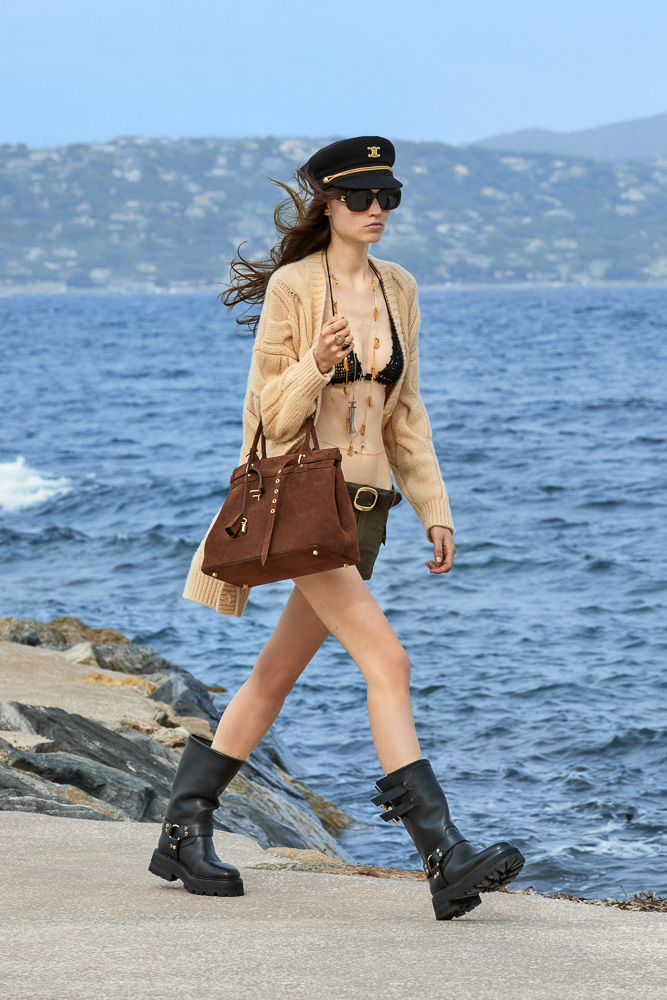 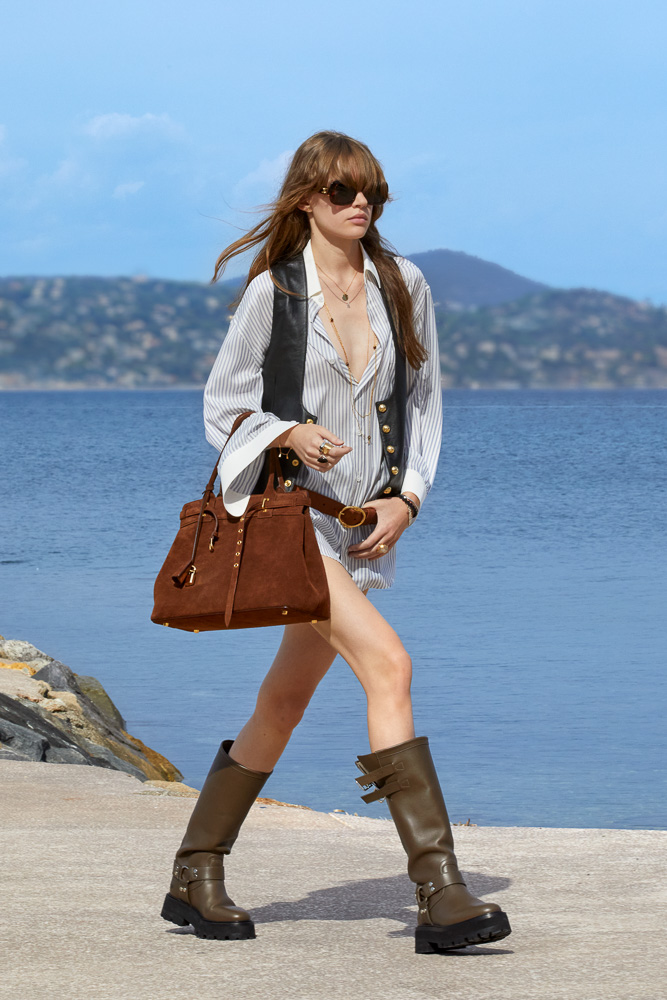 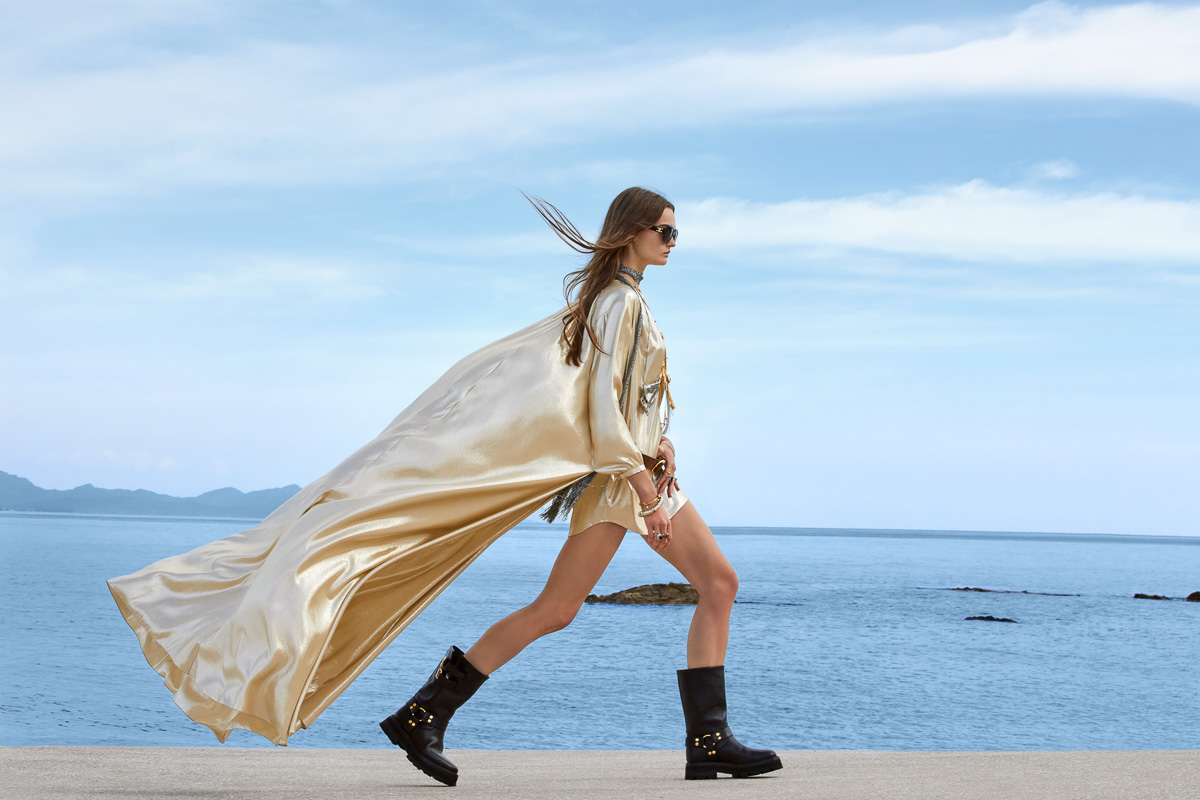 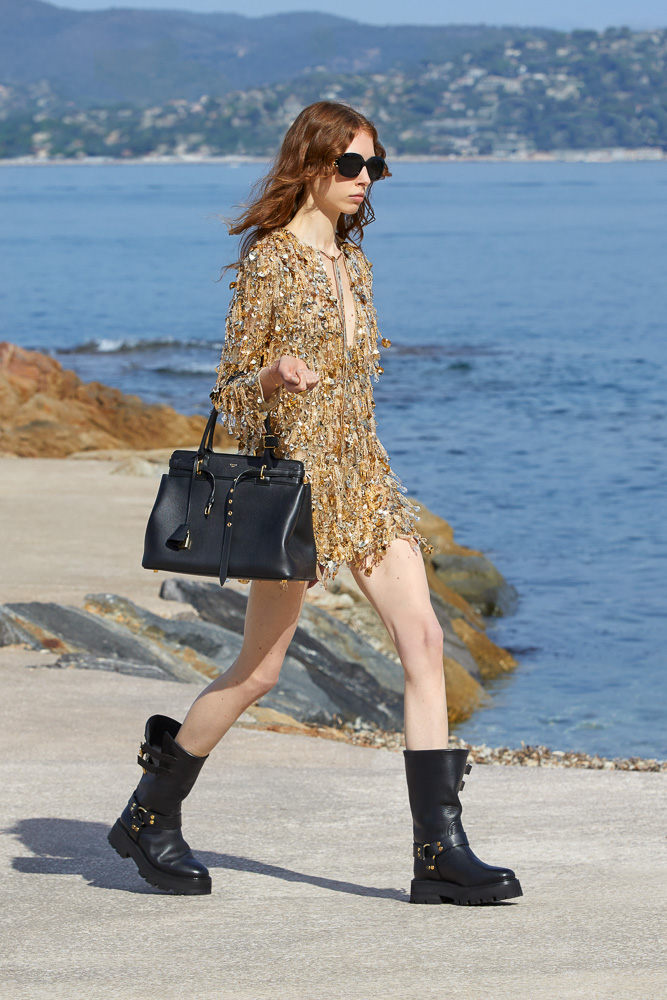 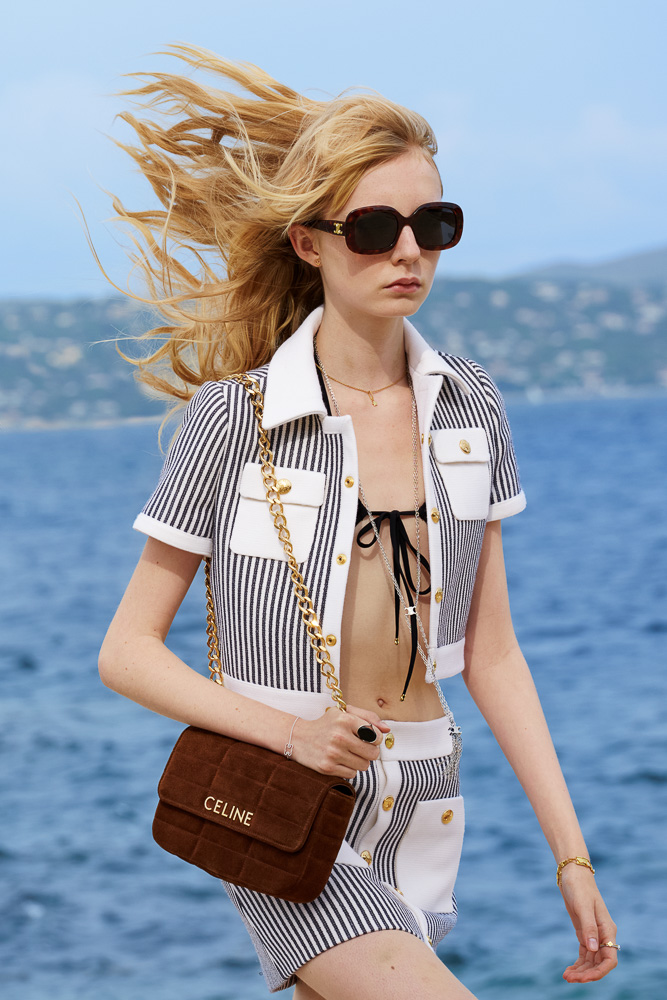 Every model looks ghastly. I thought french authorities were not going to allow models that look cachectic on public media. These models look like poster children for pro Ana websites and are very triggering

So Carla, based on your harshly stated, narrow-minded comments on these models appearance, I’m safe to assume that you post similarly ugly comments about plus size models? Do you call them bovine-like or, fleshy pigs?
For the record, I too am naturally thin and it will kill you to know I’m complimented on the daily.

I was naturally much more underweight than these models for 20 years. While there may not be many of us, we really don’t like being referred to as looking “ghastly.” I can’t tell you how many shops I would go to where the dressing room attendant would turn up their nose and say “it’s just that… she’s just so… skinny…” and scrunch up their nose in disgust. It got old.

Now, I understand these models may or may not be “naturally” skinny like I was (I’m defining “naturally” as in no diet or exercise, plenty of chocolate and ice-cream, and still being too small for a size 00), and designers need to be using a variety of body shapes, sizes, etc., but expressing disgust over someone’s body isn’t going to change that. It’s just going to make people like my younger self roll their eyes and wish you’d leave them alone.

I agree. And not all of them are naturally thin. The rest of them torture themselves to stay this thin.

I see models like them from vegan lover. Live skeleton 🩻 😂

you are such a nasty person. they are professional model. if you dont like them then just look ignored them . but giving such comment is not cool okkk.

I agree. Nothing wrong with being skinny. Yes, they’re professional models. Stop body shaming that includes both fat&skinny. Being overweight is not healthy either, but people choose to stuff themselves not working out except those have medical conditions

Not nasty, but I don’t necessarily agree with “ghastly”, but to each their own. However, they are very, very thin and the standards in modeling are going backwards to extremely skinny models. That’s an impossible standard to maintain in addition that it’s not healthy. The other issue is what message does it send to young girls and/or women who believe these standards to be the norm.

Agreed. The criticism is on the choice of the designer, not the women. He showed only one body type. (Boring.) He participated in an overplayed body type trend, even though it didn’t contribute any substance to the collection. (Unimaginative. Noisy.) Would you expect an architect to produce schematics that only work on flat ground when the client has multiple global properties? Nope. They’d lose their job.

Hedi could have shown the vision on a range of body types, and imo, declining to do so is a cop out. (These clothes flatter a variety of body types which makes it even more suspect.) If the concepts don’t read, the shapes don’t tell a story, or there’s no aesthetic continuity across body types, well, get back at, my dude, and find something that does.

It’s Heidi’s job to design, and he phoned in the choices on this one. #tryharder

I actually agree. There’s skinny and then there’s clinically anorexic.

I cannot agree with your opinion. Ghastly looking models? I don’t think so. I think they are simply cool and present Hedi S’s vision!
What do you think when you look at yourself in the mirror?

They are alarmingly underweight is the point. If anorexia is Hedi’s vision, mission accomplished.

Completely agree. Apparently the new look on the runway is HEROIN CHIC. The way you would look if you were wasting away on drugs. So disappointed in Celine and will not be purchasing from them until they stop using underweight models

The handle drop on this bag annoys me greatly. It is both too long to be a proper handbag, and too short for shoulder-carry. It is therefore seemingly designed for arm-carry, but then the style and size of the bag suggests it may become too weighty when filled with a day’s belongings.

Thankfully (hopefully) it doesn’t have a shoulder strap. The current trend of carrying obvious handbags, with fixed handles, on shoulder straps, is a bit try-hard for my tastes.

What is happening to Celine?? I used to love the brand and its bags so much under Phoebe Philo, now almost every bag they bring out is ugly in my opinion…

Thank God someone mentioned how shockingly thin these girls are…oh, my 🙁

The Conti is giving me RL Ricky vibes

Meh…and I really do not like the logo on the brown bag.

I’m sick of the skinny shaming too. Ghastly….no. Skinny..
Yep. I grew up with models looking like this.

on the subject of clothes and bags i loved it, love the bag even and im not a celine bag fan so……. cool !

models …… it’s just ….. no words, because these looks would look good and all shapes and sizes so diversity would help.

still i must say I truly like the collection.