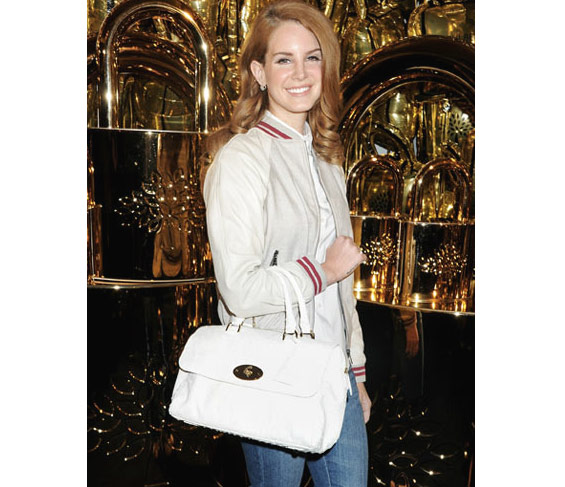 We discussed one Miss Lana Del Rey over at Bag That Style recently, but the advent of the Mulberry Del Rey Bag during London Fashion Week and Del Rey’s front row seating at the handbag powerhouse’s show over the weekend give us renewed opportunity for me to air my secret shame. (And of course, for us to discuss the bag and its particulars.)

If you follow pop culture or spend too much time on the Internet, you’re probably aware of how shameful it is to enjoy Lana Del Rey and her various crass marketing schemes. Listen to her album; it is truly stupid. Sadly, I know that because I listen to it. A lot. I just make sure that no one sees it pop up on my phone’s screen when I’m listening to it in public; I’m not sure if I could take the embarrassment. Similarly, I’m not sure if I could bring myself to plunk down $1250+ on a handbag that bares Del Rey’s name unless it was absolutely gorgeous, gorgeous enough to eclipse the Del Rey Shame, and this one isn’t. (Don’t worry, we have more pictures after the jump.)

The problem, of course, was the Mulberry surely undertook this whole Lana Del Rey business back when she was the Next Big Thing and people were thrilled to have her, a glamorous unknown newcomer whose songs were being played at the best fashion shows, associated with their brand. Six months, one utterly awful Saturday Night Live performance and a whole host of appalling reviews for her completely vacuous album later, and people aren’t sure what to make of Miss Del Rey (not her real name, of course), her rich daddy or her fake lips. Not that fashion has ever held a rich daddy against anyone, of course.

Mulberry’s sticking with its star, though, which might not be a bad idea considering Del Rey’s strong album sales in the face of her somewhat questionable product. The problem, though, is that the Del Rey Bag isn’t exciting, perhaps because its namesake’s style hasn’t proved particularly interesting. It’s a Speedy with a flap and Mulberry’s signature turnlock, which seems less like it should be a heavily promoted special piece than merely a part of Mulberry’s classic line. With a bag that will get so much press for the brand, I wish Mulberry had pumped up the design volume just a bit; when Mulberry’s accessories crew flexes its muscles, great things happen. Unfortunately, this bag isn’t great, it’s merely average. Perhaps it’s appropriate for Lana Del Rey after all.

The bag will be available in the fall with a starting price point of $1250. The white ostrich version that Del Rey carried in the front row of the Mulberry show was apparently made specifically for her and will not be produced. 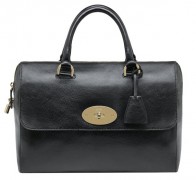 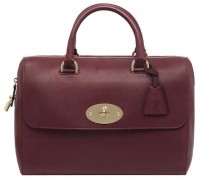 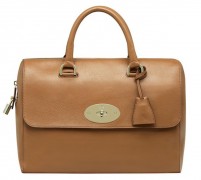 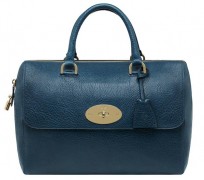 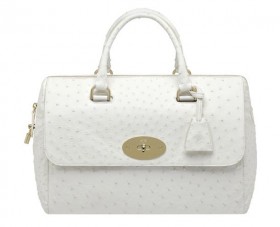 I love these bags…and I also enjoy your Real Housewives updates!

I have no clue who Lana del Ray is but I really like this bag actually. Then again, it is just my style. I will not however be paying that much for a fancy duffel/doctor/speedy interpretation.Â

I’m listening to her new album while reading this!Â

That’s kind of sad that she is their It girl. I guess it’s no worse than Blake Lively over at Chanel, though.

Not moved by Lana Del Rey or her bag. Meh.Â

I love these handbags.Â  Great colors too

I don’t understand the Lana Del Rey dissing, I think she made a solid album and she has a bunch of great non-album tracks too. I feel sorry for her for not acing SNL, I think she was just too nervous.

ouch! lol I downloaded her album.. I like it… The bags are ok also 🙂
http://nyorkeratheart.blogspot.com