If I had gone to the Emmys, I would have carried Alexander McQueen 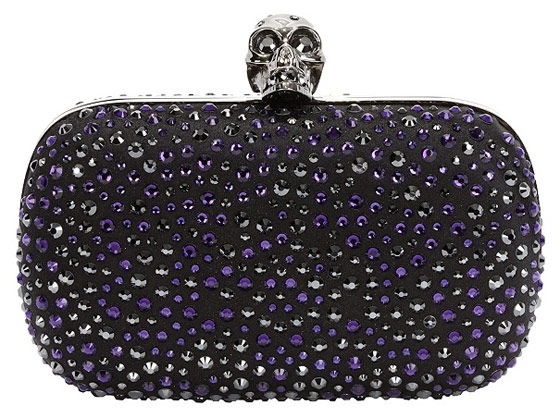 I didn’t get an invitation (lost in the mail somewhere, surely) to the 2010 Emmy Awards, so I’m just going to show you a life-size picture of the Alexander McQueen Crystal-Encrusted Skull Clutch and imagine it in my hand. Because of that lost invite, I was also forced to give back my Marchesa dress and let Heidi Klum wear it, but she didn’t have the clutch to pair with it. So, in that regard, I still win. Except that she’s Heidi Klum, and I’m a blogger who doesn’t actually own this clutch either, technically speaking.

Ok, so maybe I don’t win. Either way, you can keep up with our coverage of Emmy fashion and weigh in on your favorites (and least favorites, because that’s way more fun) over at BagThatStyle.com!

Buy through Alexander McQueen for $2215.

Oh my gosh this is so beautiful. My only fear would be the small jewels would one day start to come off one by one.

Anna Paquin carried the spiky one, in red.This one is stunning, I love this skull bags!!!

Yep, and Ricky Gervais’s date also had one – a champagne version of the one above! I was really happy to see women carrying them!

or..
we might just have to kill that postman! bwahahaha (ipad)

oh Amanda u’re so funny..
your writing made me giggle indeed!
i’m sure next time, u’ll get the Emmy invites! *wink*(ipad)

UGH! I love it! I loved that Anna Paquin paid a tribute to him by wearing one of his dresses. It was so beautiful.

Love the clutch one of the best version of this McQueen’s clutch!

Well, if you were generous enough to lend Heidi Klum that Marchesa show stopper, I don’t blame you for holding back on the edgy McQueen clutch. 😉

I don’t like the skull at the top. (ipad)

Alexanders bags do vary so much in design and detail.This would suit a gothic look.Not for me.[ipad]

Such a fun little clutch! (ipad)

Love the edgy design on this clutch! (ipad)