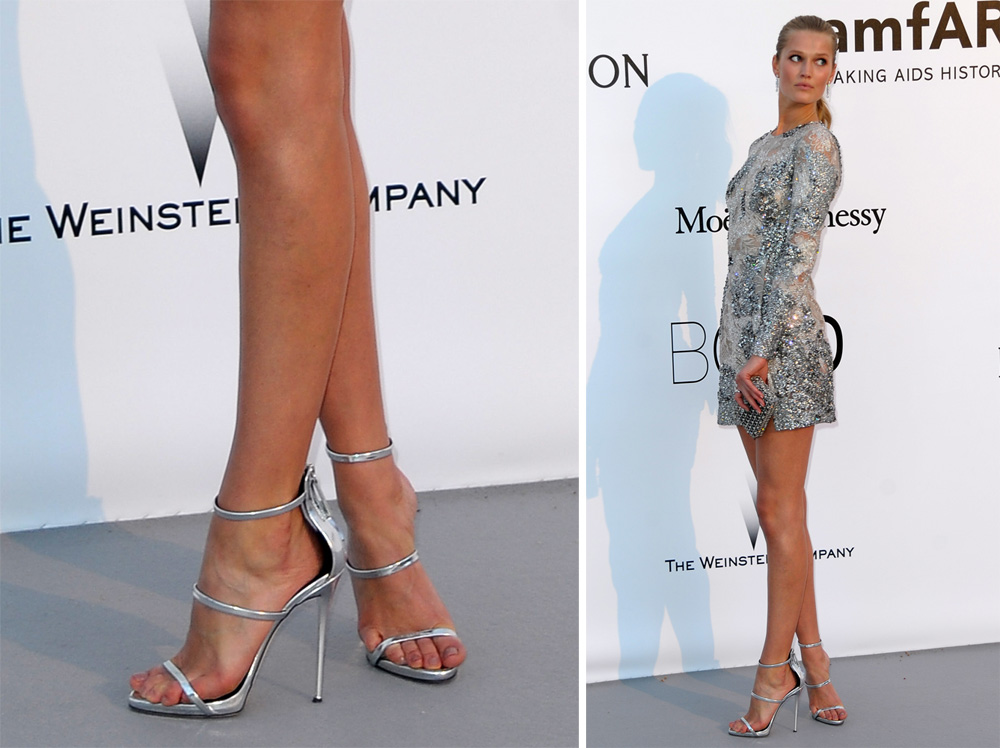 Watch out, Monsieur Louboutin. Giuseppe Zanottis were all over celebrity feet at Cannes this year, and certain styles are experiencing a crazy surge in popularity, even among women who did not get to make all-expense-paid trips to France recently. What’s most amusing about GZ’s recent windfall is that platform sandals–Zanotti’s bread and butter of yesteryear–are suddenly back in a big way, but while the brand can certainly still deliver on the platform front, the best styles that it currently offers are also their most minimal. Here are some of our favorite new GZs on the feet of supermodels, actresses, and…well, mostly supermodels, really.

Here’s Aussie actress Bella Heathcote, striking a pose at a Cannes photocall in a pair of gorgeous mirrored leather GZ platform sandals and a strapless floral Giambattista Valli dress. We featured a bronze version of Bella’s sandals in our incredibly handy Guide to the Spring 2016 Platform Resurgence. 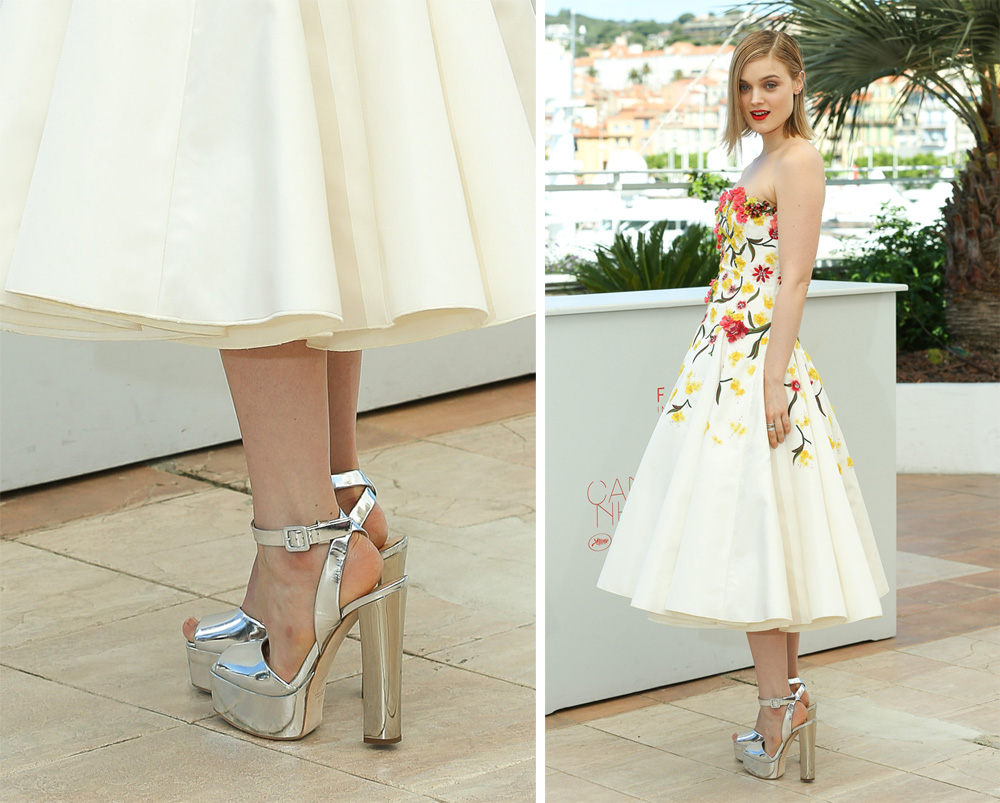 Here’s proud “Oakland booty” (sure, okay, Blake) owner Blake Lively, greeting fans outside her hotel in France in a pair of the extremely popular Giuseppe Zanotti Metallic Three-Strap Sandals. As you can see, this GZ style is uniquely designed to make any woman’s foot instantly look like a Barbie doll’s. 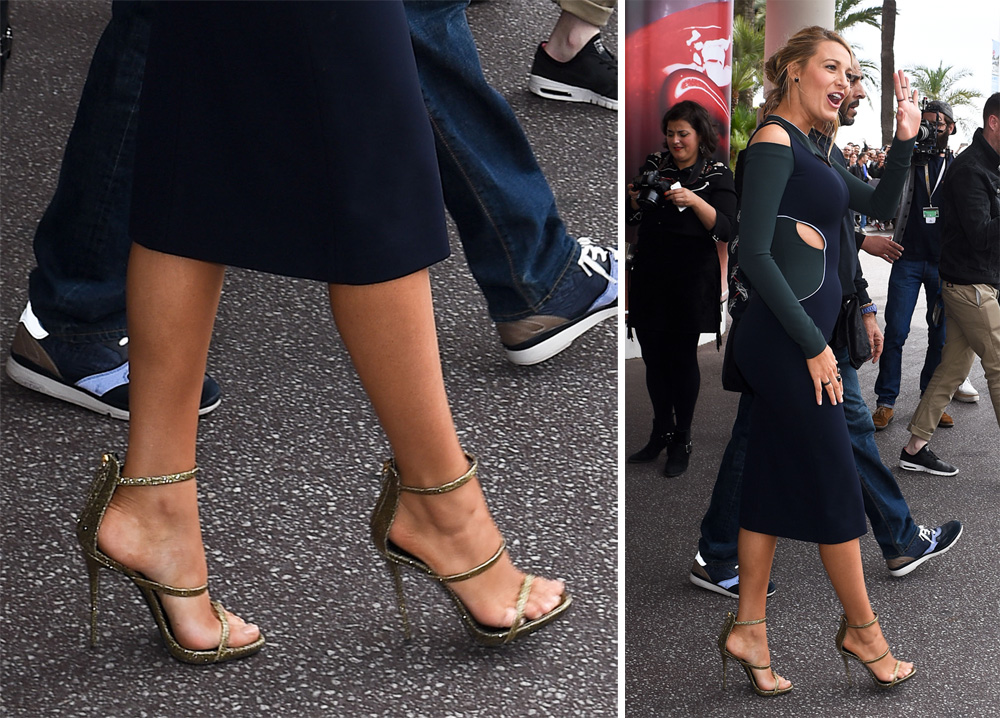 Few things in life are as glamorous as Chanel Iman on this red carpet for the de Grisogono party in Cannes. Chanel is also wearing a gold pair of the Three-Straps, though these have a solid metal finish, unlike Blake’s. Chanel’s gold dress is by August Getty Atelier. 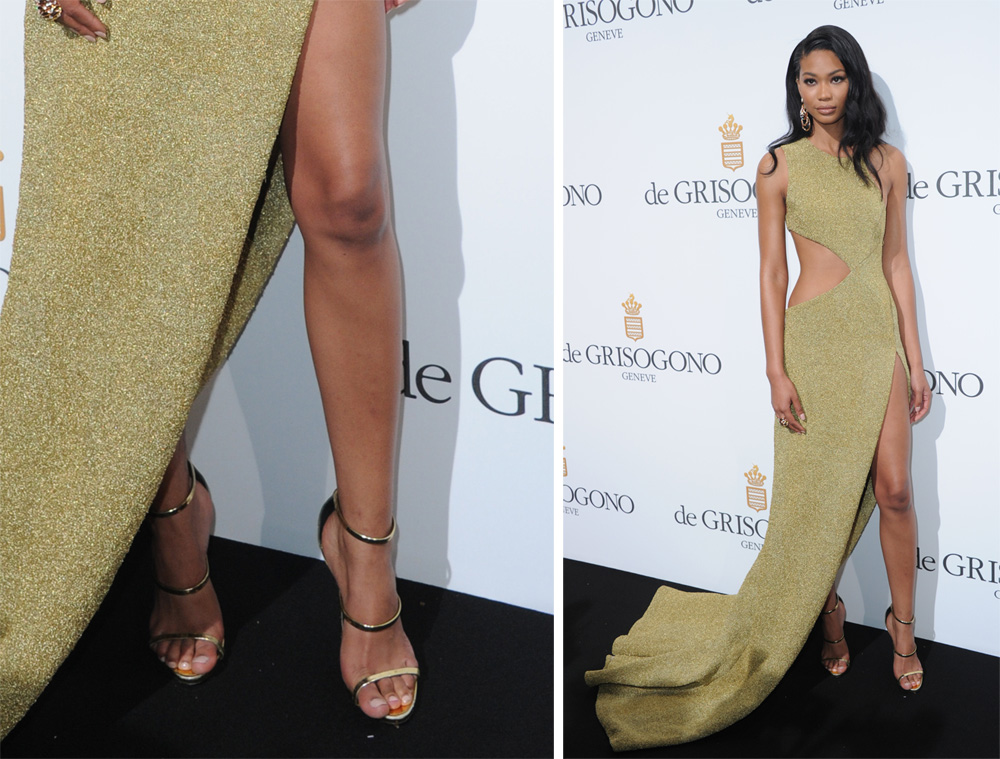 Karlie Kloss wore these rhinestone-encrusted GZ sandals to the Cannes amfAR Gala. These are very similar to the Three-Strap, but this design has lines that keep the eye moving. Karlie’s off-the-shoulder black gown is by Marchesa. 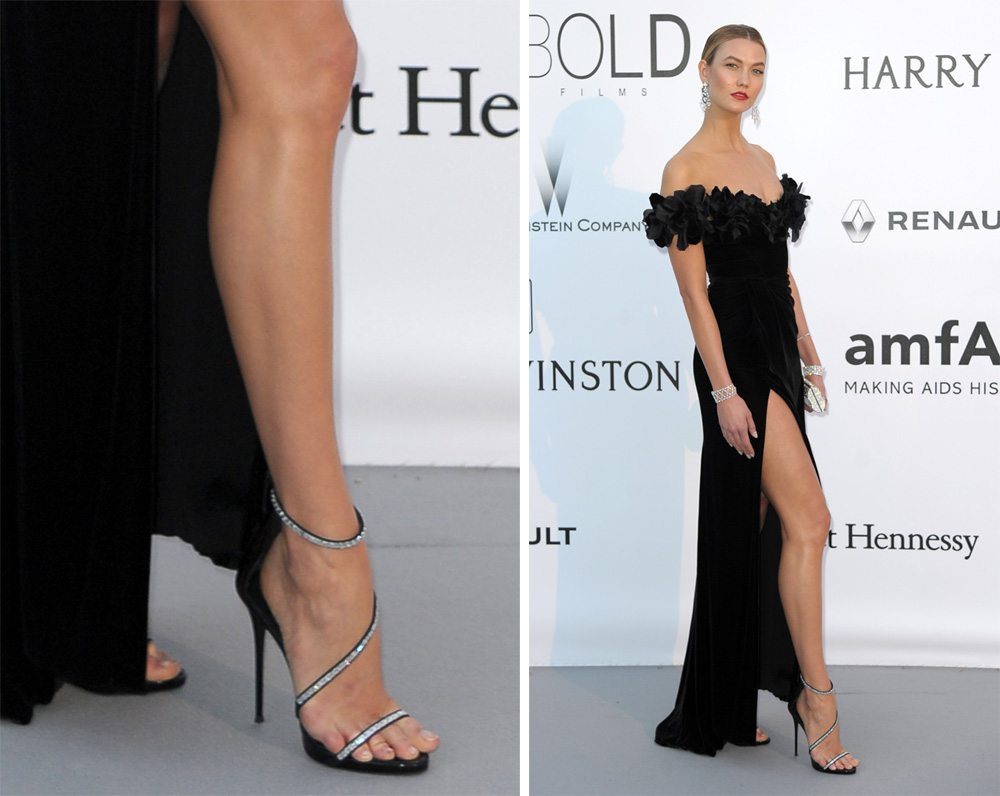 Here’s Pretty Little Liars star Lucy Hale, rocking a black patent leather version of the Three-Strap at the Billboard Music Awards. It probably won’t surprise any one at this point, but we declared this sandal one of the 12 New Shoe Classics You Need in Your Closet way back in February. And we stand by that statement. 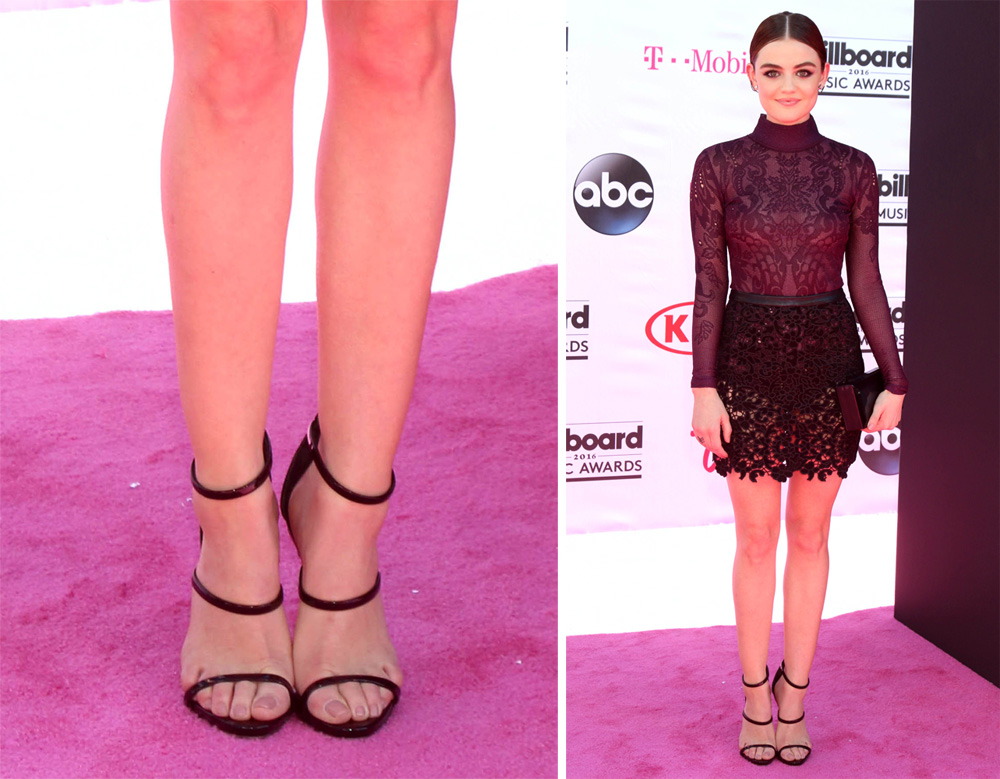 Bouncing back to that Cannes amfAR gala for a moment: Petra Nemcova wore these burgundy satin GZs to the event, which look great until you realize that Petra’s pinky toe is obviously being evicted from the shoe. The theme for this year’s Cannes gala was “70s disco,” by the way. 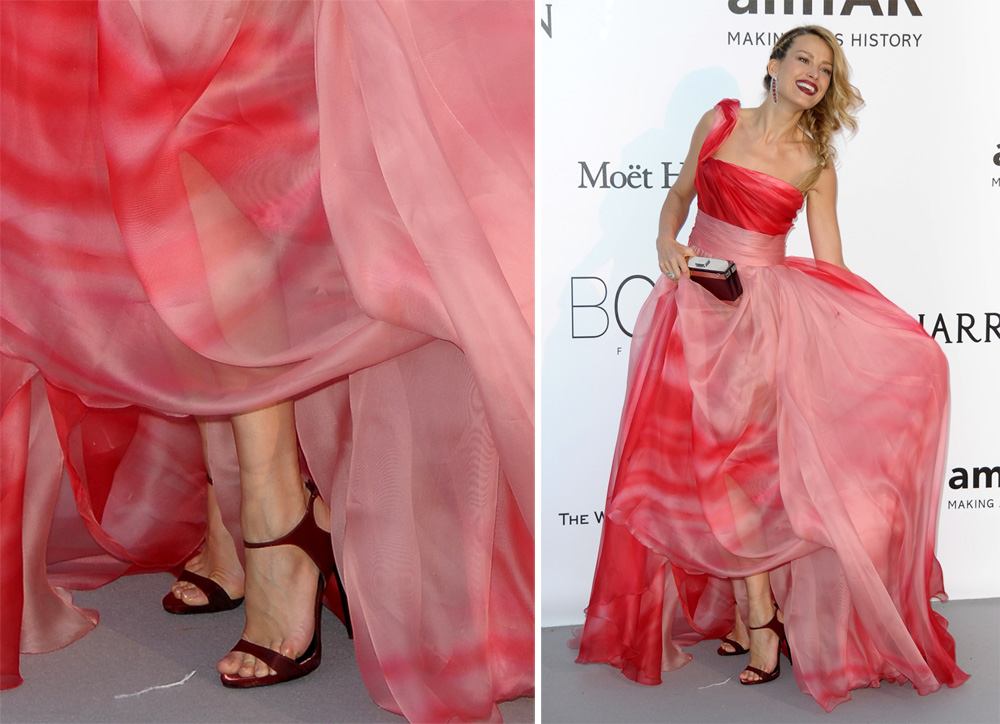 Finally, because Giuseppe Zanotti does do other things well besides sandals, here’s Zendaya wearing a black pair of Giuseppe Zanotti Suede Over-the-Knee Boots to yet another Met Gala afterparty. 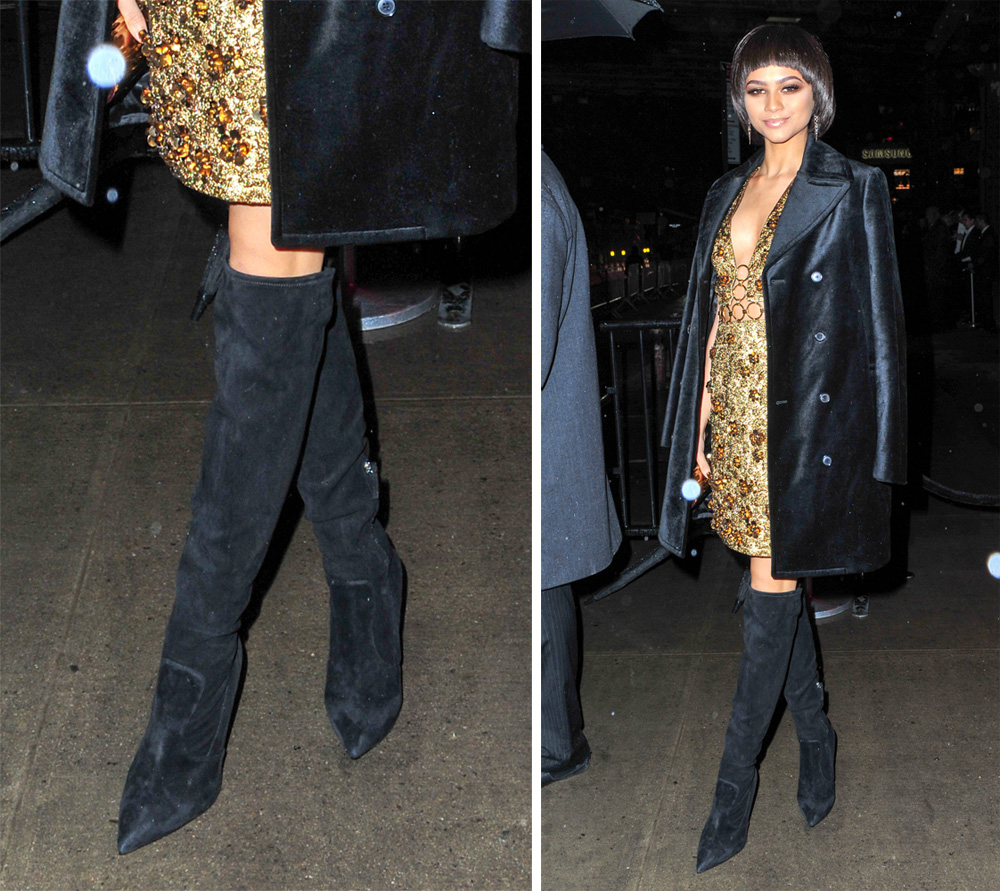 eek, the first pair looks awful. due to the sharp incline, she’s got 2 inches of empty space at the back of the shoe and her toes are hanging out the front. a rather unfortunate look for shoes that cost $$$$.

I have a pair and they’re actually super comfy

Her makeup artist should have put some concealer on her feet. All the scars and bruises! She’s making a public appearance.

Awful! In every photo that 3-strap sandal does NOT fit. Observe the huge gap at the back heel. The only shoe that looks like it fits is the boot. Dreadful.

Lucy Hale and Chanel Iman already have bunions, which are caused by wearing high heels (plus things like flat feet). Sad.

I brought those 3 straps sandals(they’re call Harmony btw) back in january and have never wore them out. They are just not comfortable on which unfortunately is true for most Giuseppe Zanotti’s shoes. I really love his design & he needs to find a way to make his shoes more comfortable…