Last Week, Celebs Flaunted Their Designer Handbags and Significant Others Across the Globe 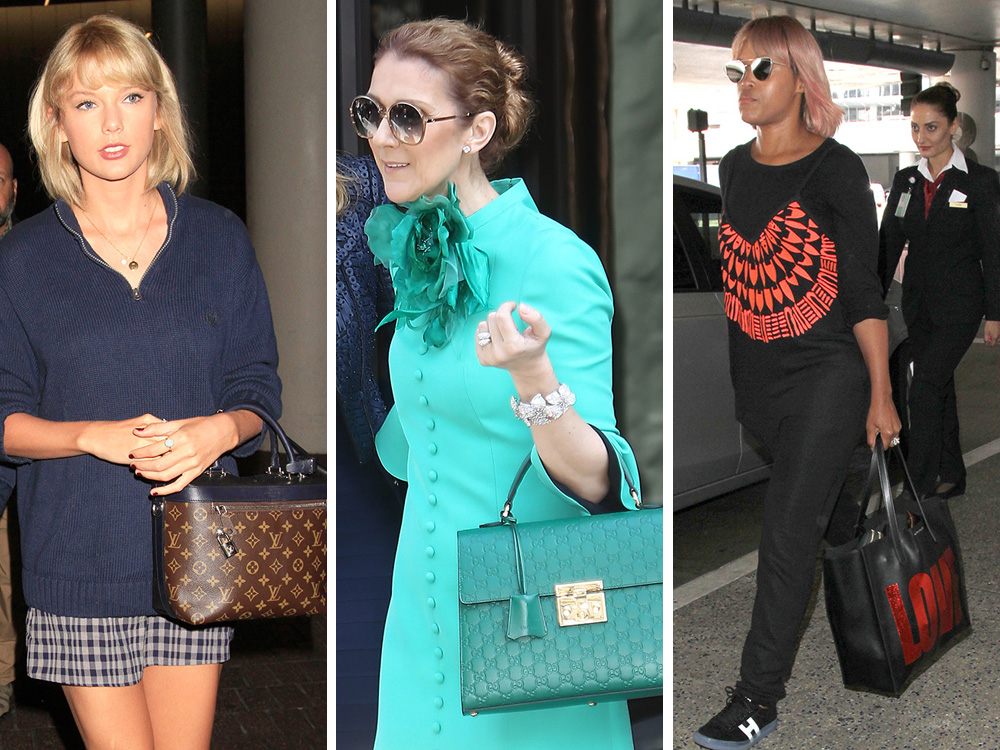 This seems like an especially flashy celeb handbag roundup, mostly because so many people carried multi-thousand dollar handbags to LAX, PCW, or various international summer soirees. And, of course, several of them did so while on the arms of their significant others or spouses, who all happen to have multi-million dollar net worths. (Have you ever noticed that one of Google’s first three auto-suggestions for any celeb’s name is “net worth?” Right after “feet?” It’s disturbing.) Also, we have a photo of Hiddleswift, as well as Hilary Duff exiting a helicopter, which basically triples the luxe factor of any blog post that is already about extremely luxe handbags.

Model/actress Emily Ratajkowski was recently spotted carrying this tiny Burberry mini. It is so small, simple and understated, I can’t even believe there’s a place for it in this crazy world of oversized Chanel Flaps and exotic Birkins. 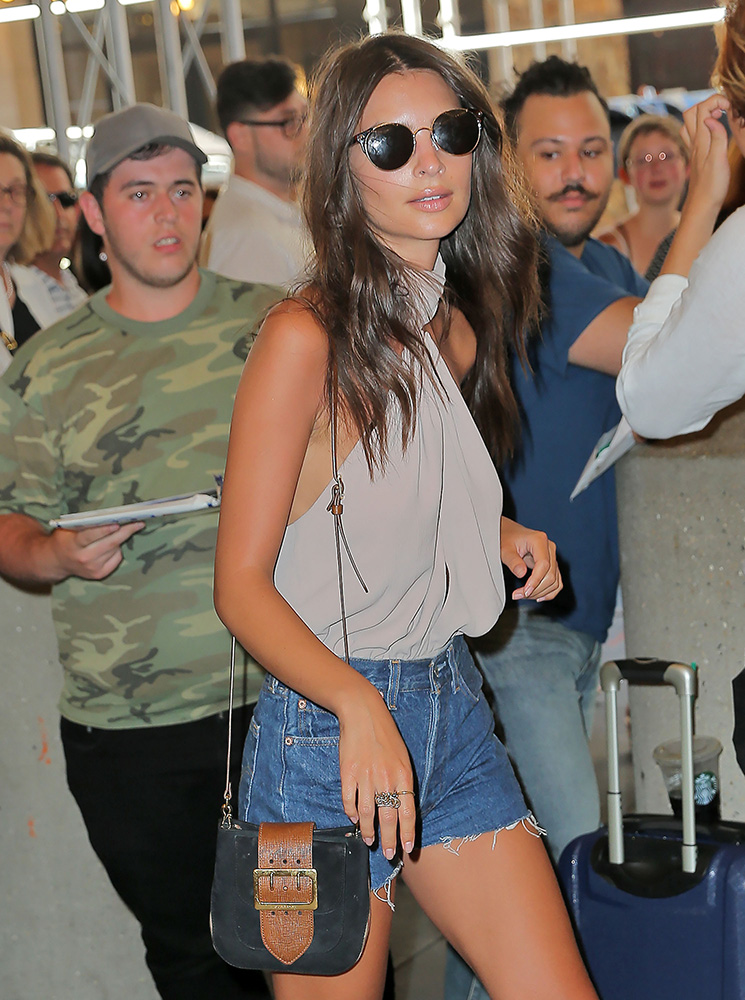 Here’s Eve (!!!) leaving LAX after being abroad for some time. (Her husband is English, so she might’ve been spending some time there.) She’s carrying a big, bold Givenchy Love Tote. 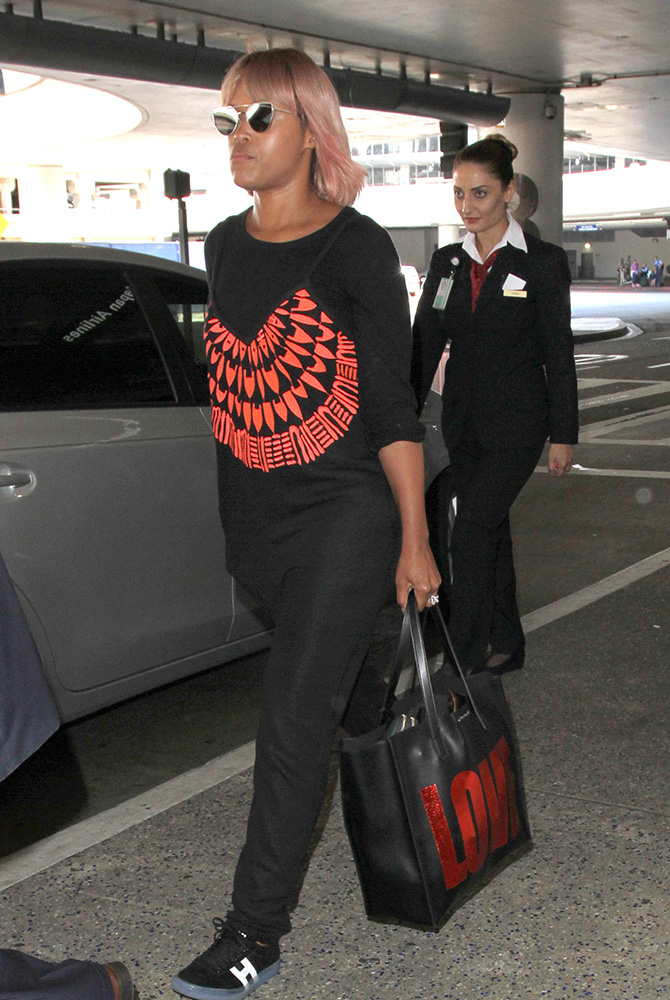 Why yes, this is Hilary Duff, stepping out of a helicopter with a sweet pale pink Sac de Jour. She’s actually on set for her show Younger, which was filming at the 30th Street helipad in Manhattan. 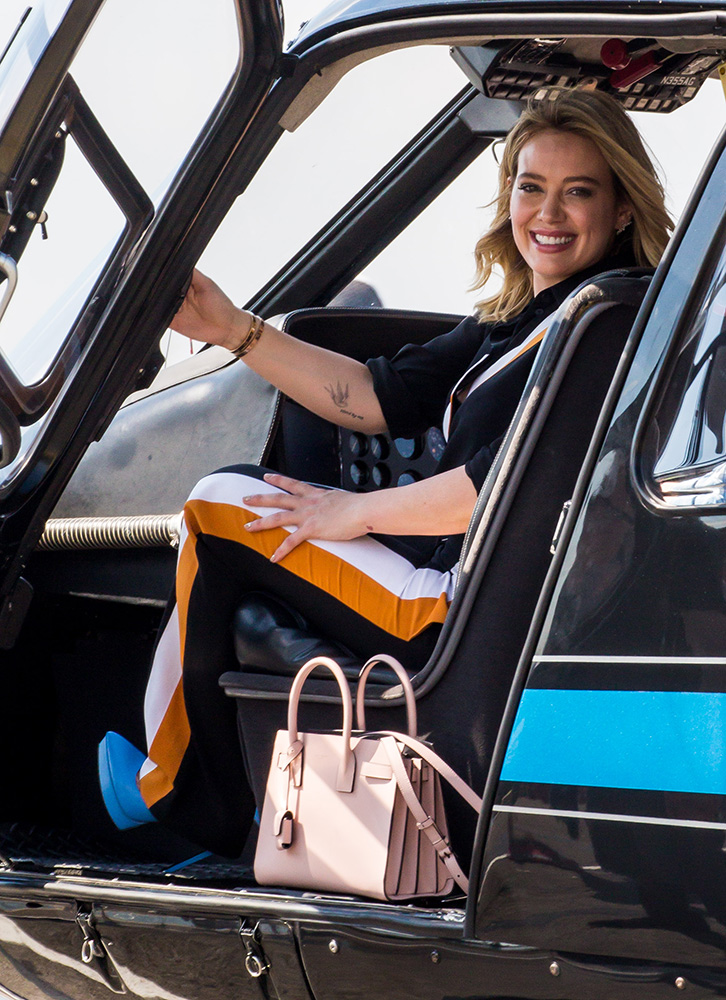 Lily Becker carried this studded white Valentino bag to the annual summer fete at the Serpentine Gallery in London with husband Boris. They’ve been married for seven years, which is basically a century in celebrity years. 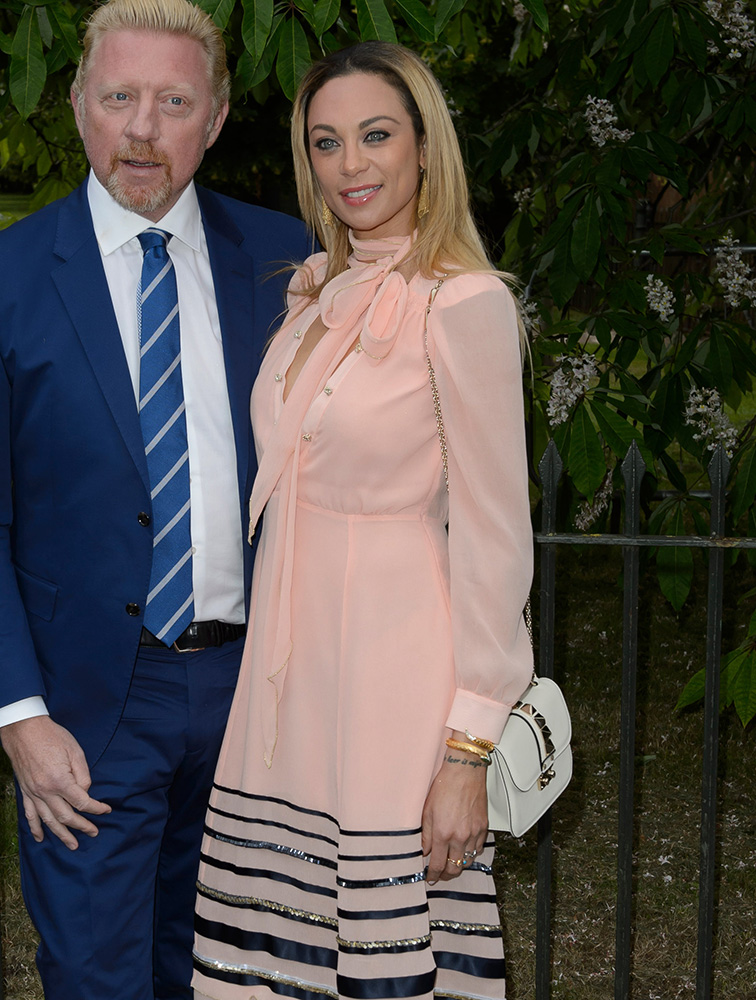 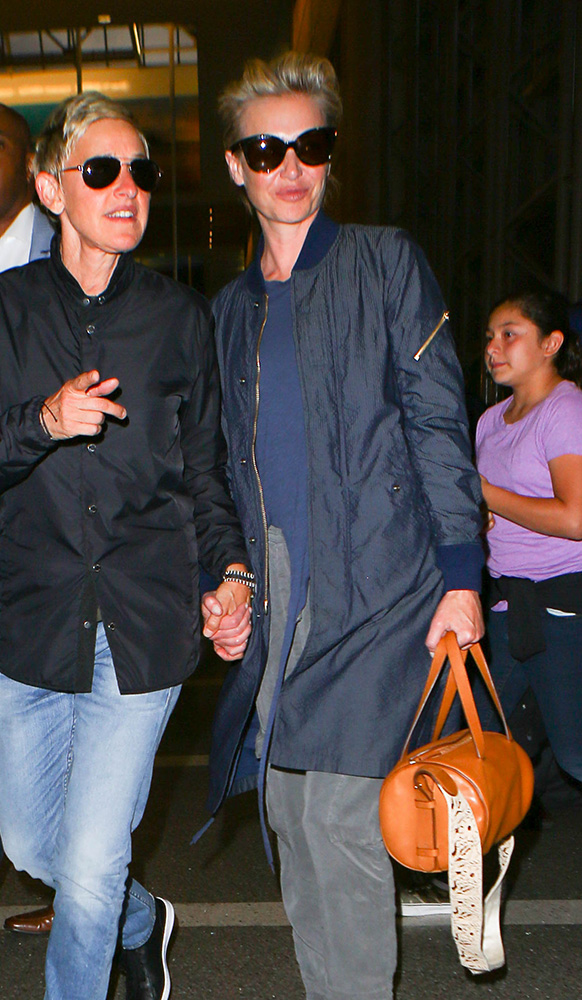 Hiddleswift alert! Taylor Swift carried this Louis Vuitton Cruiser through LAX, which jibes perfectly with the uber-preppy style the couple has chosen to adopt since hooking up. (Look, he’s even wearing a quilted Polo jacket. HE’S BRITISH.) I personally hope these guys are deeply in love and it lasts forever (which is 8-10 years in Hollywood time), but if this is all fake and they are secretly filming a movie, I won’t be terribly disappointed, and I’ll DEFINITELY see the movie. 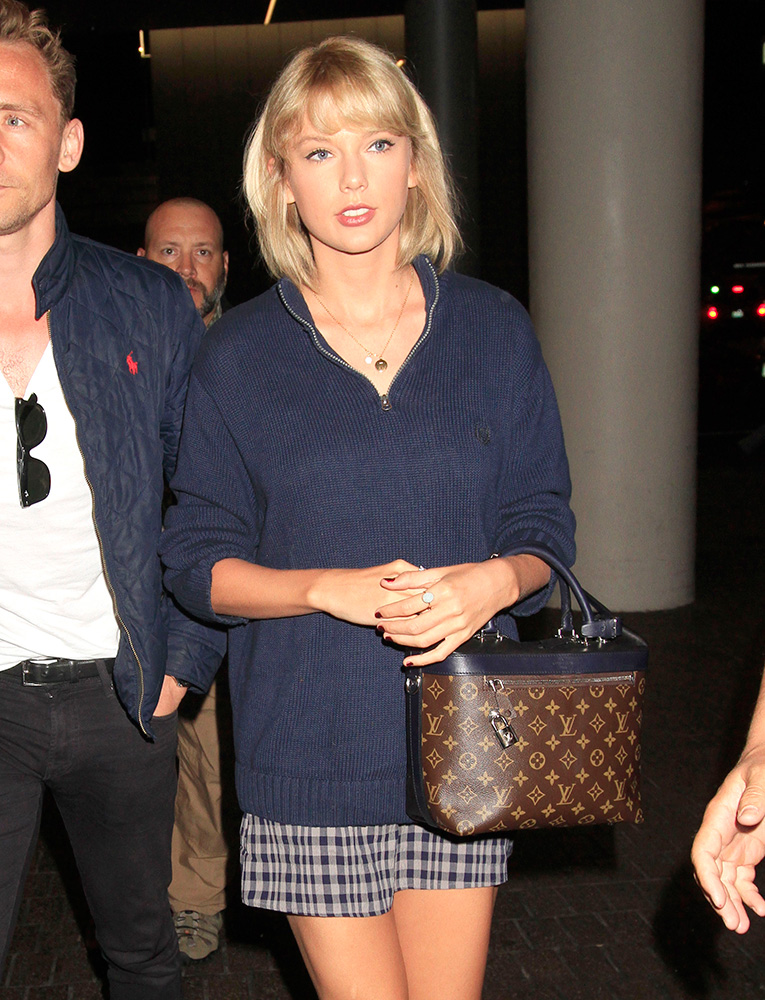 Finally, we have Teresa Giudice arriving at the SiriusXM studios in Manhattan to promote the new season of RHNJ. She’s carrying a bright orange Céline Luggage Tote, because orange…is the new black? Sorry, couldn’t resist. 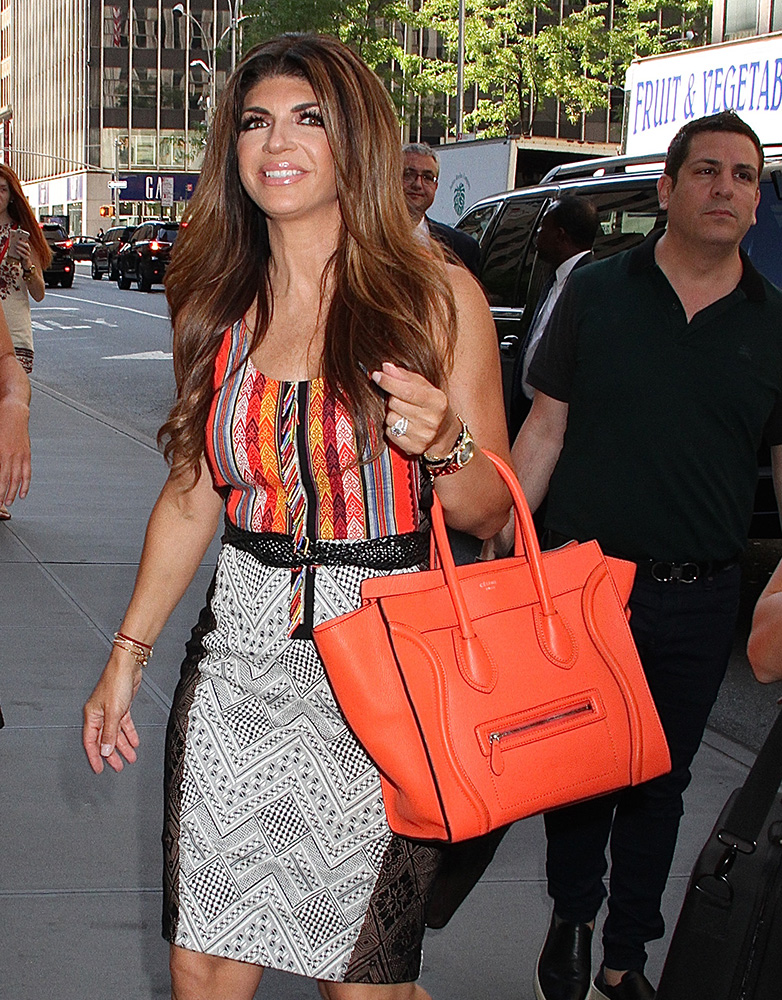 Celine Dion’s style is so underrated. she is so elegant and classy, always looks like a royal.

Don’t forget we did a many bags of Celine recently!! https://www.purseblog.com/celebrities/celine-dion-designer-bags/

Came down to comment on her green Gucci too! What a stunning bag, and she looks impeccable.

It looks so classy, i super love it!!!

HEH@that pic of Emily and the creepy moustached dude oogling her hotness!

Omg! Taylor’s bag is drop dead gorgeous! I wonder if Meg can provide more information on the bag? Apparently the LV cruiser bag on LV’s website looks kinda different from what Taylor is carrying!

I love this, she looks amazing.