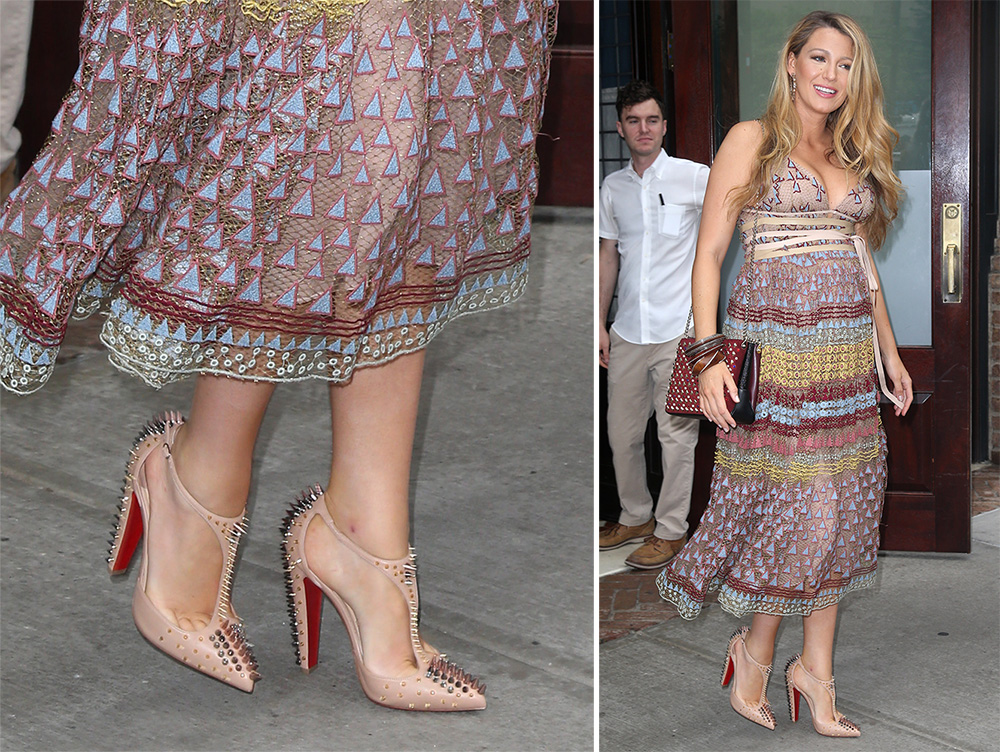 Blake Lively has not one but two movies to promote this summer, and that means double the Louboutins. We only recently devoted an entire post to her fantastic Louboutin collection, in which we discussed her Louboutin love at length. But Blake has worn all these Louboutins just in the last few weeks, and there are absolutely no repeats! Some are so new, we don’t even know what to call them. Blake, I feel we owe you a debt of thanks for fulfilling all of our designer shoe content needs.

Blake wore these extremely minimal new black Loubs to the premiere of The Shallows in NYC. Her beautiful black and white floral dress is a Carolina Herrera. 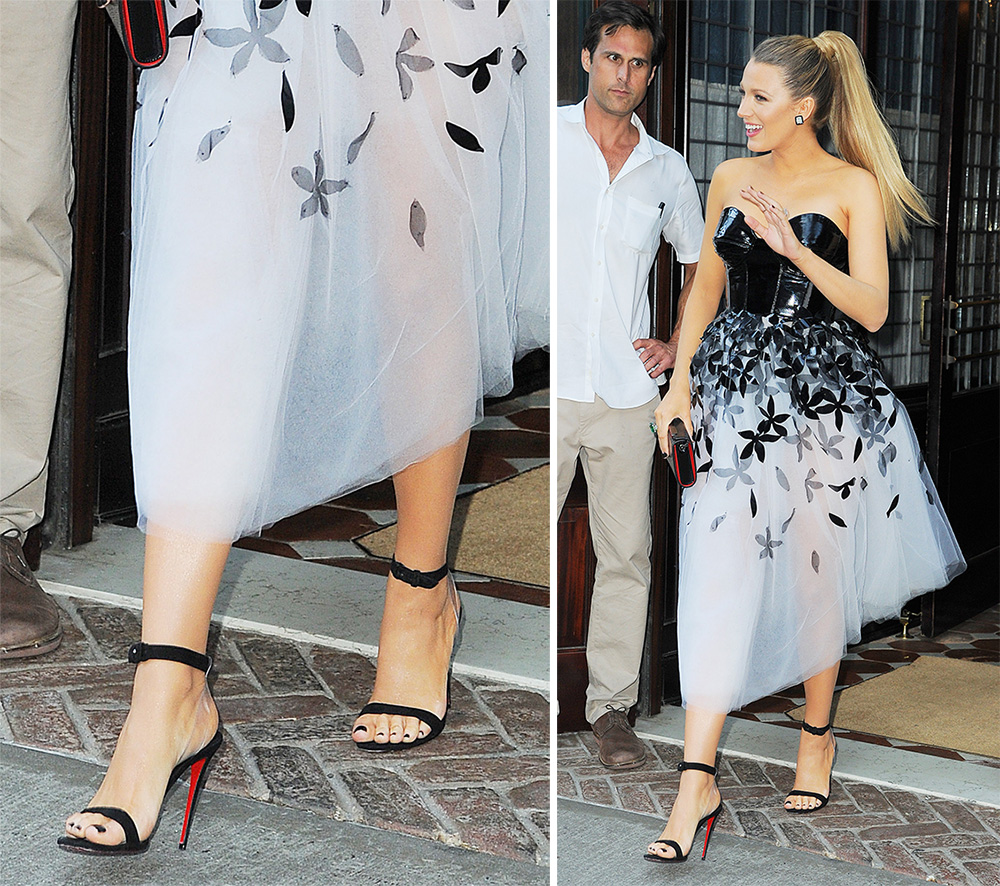 Blake wore this ensemble to promote her two flicks on Jimmy Fallon. These floral patterned Louboutins are also extremely new. Would you believe me if I told you she was pregnant? That’s right, Blake Lively is promoting for two. 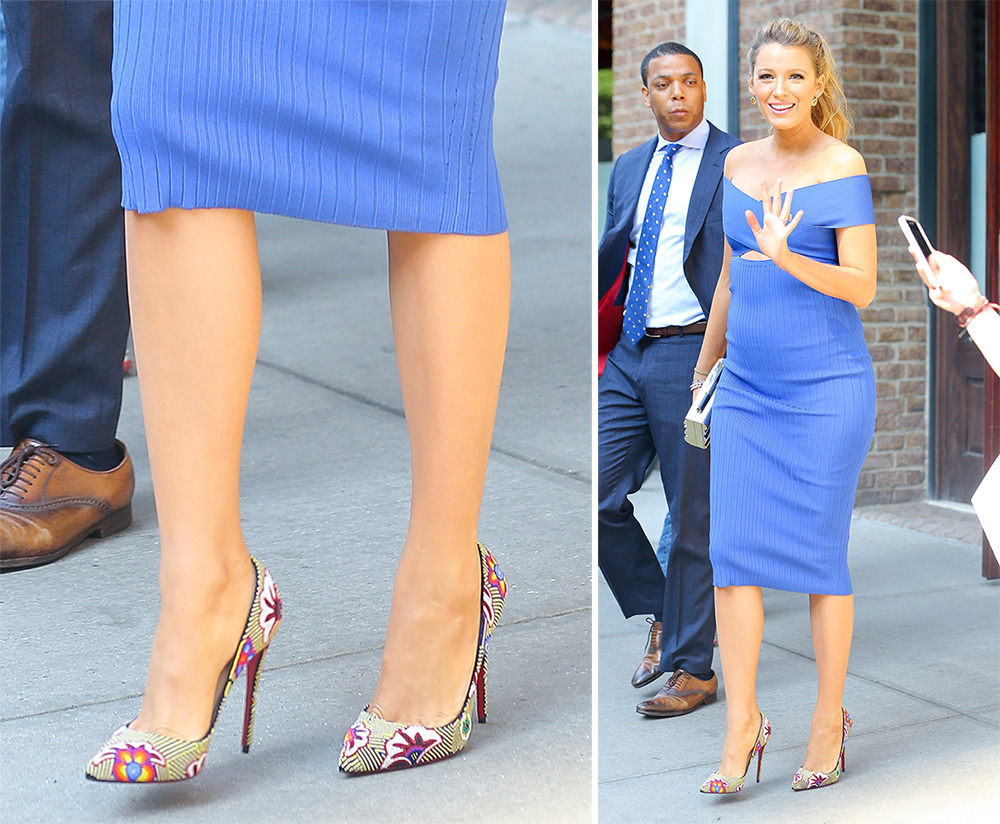 Look again, that’s not J-Lo. It’s (a slightly tanner than normal) Blake Lively, wearing a pair of black mesh Christian Louboutin Follies Strass Pumps with a sexy David Koma dress to an after party for The Shallows‘ NYC premiere. 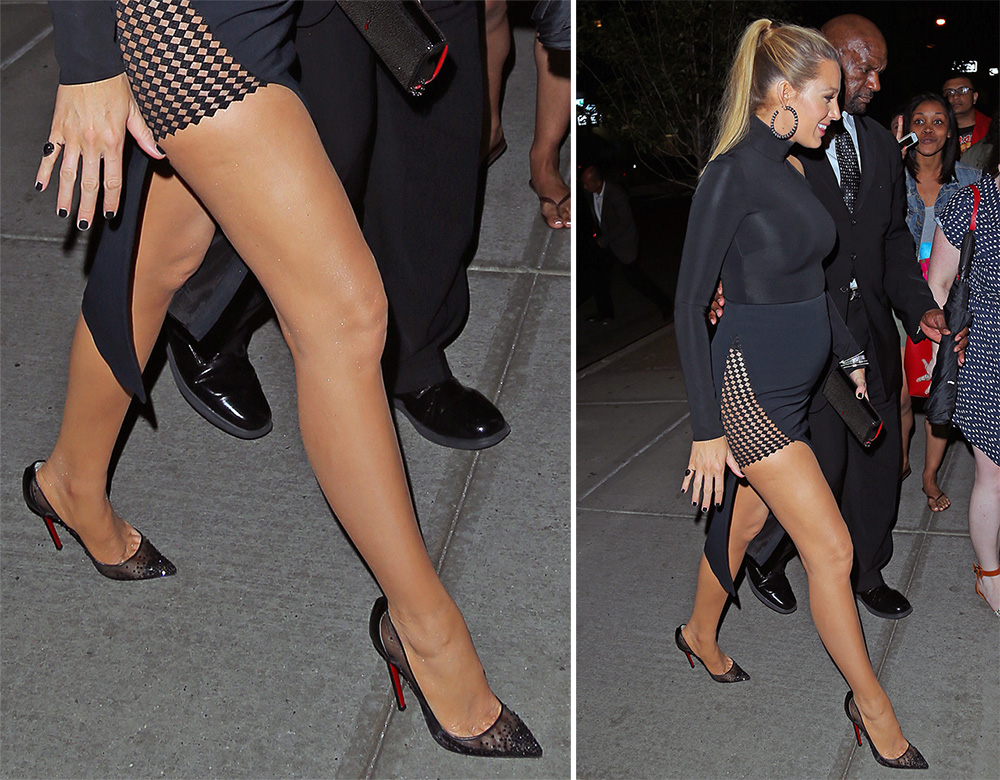 I love this look because it’s extremely Serena Van Der Woodsen circa 2007. That’s partially because empire waists and boho everything were both absurdly trendy then. (Though this dress is actually from Valentino’s Fall 2016 collection.) Also, spiked Louboutins probably made many an appearance on Gossip Girl at least one.

Speaking of spiked Louboutins, Blake wore these totally bananas, curiously named Louboutin Miziggoos to promote her other film Café Society around NYC. I mean “bananas” in a good way, of course, as long as Blake isn’t a shoe-thrower when she’s mad. 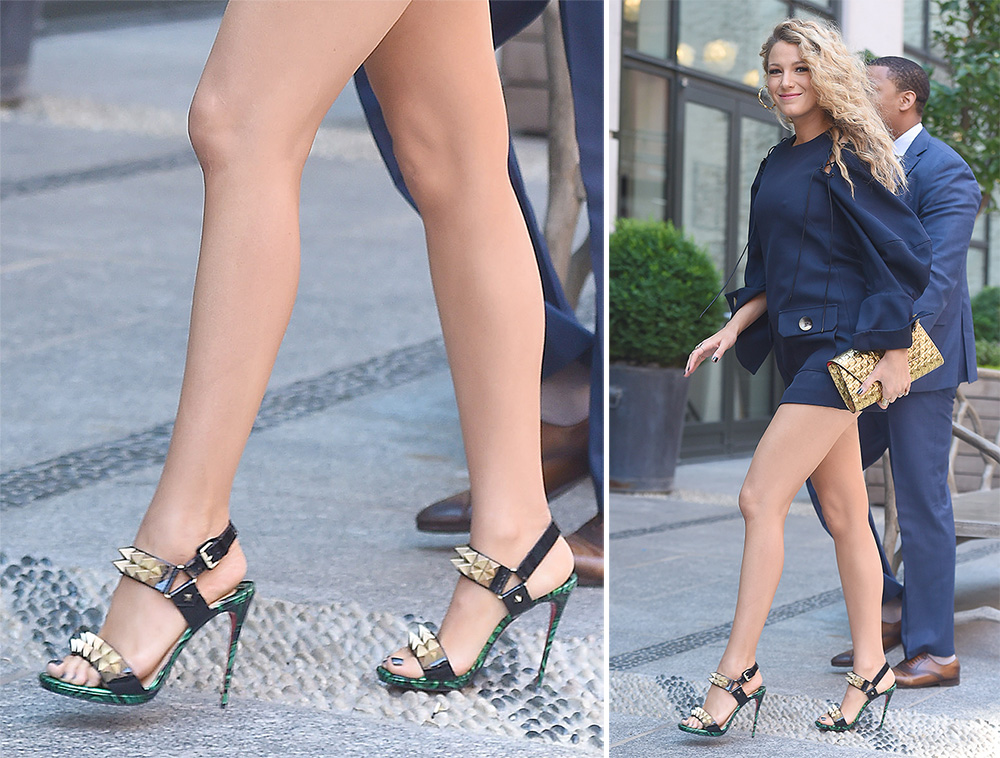 Here she is returning to her hotel once again after another round of press appearances for one movie or another. She’s wearing a shimmering, blue-and-gold ombre pair of crystal-encrusted Louboutin Pigalles. 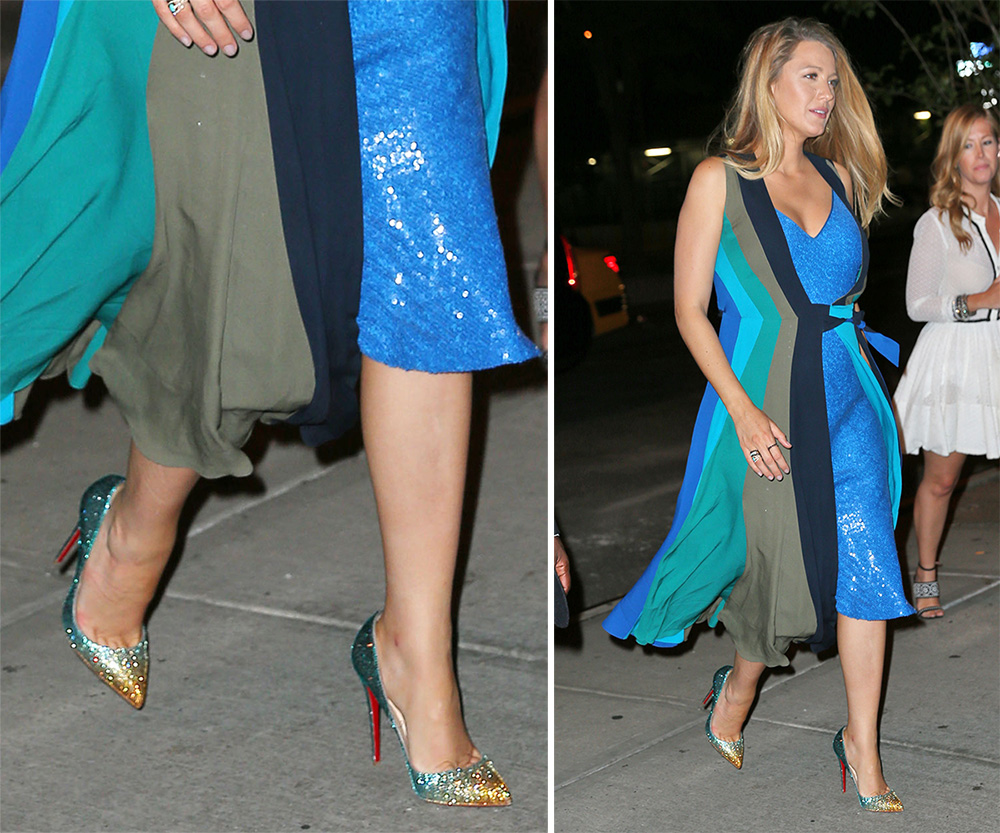 Blake also wore these mighty metallic leather So Kates while on the press trail for The Shallows. So Kates were basically designed with Blake Lively in mind. Her dress is from Michael Kors’s Fall 2016 collection. 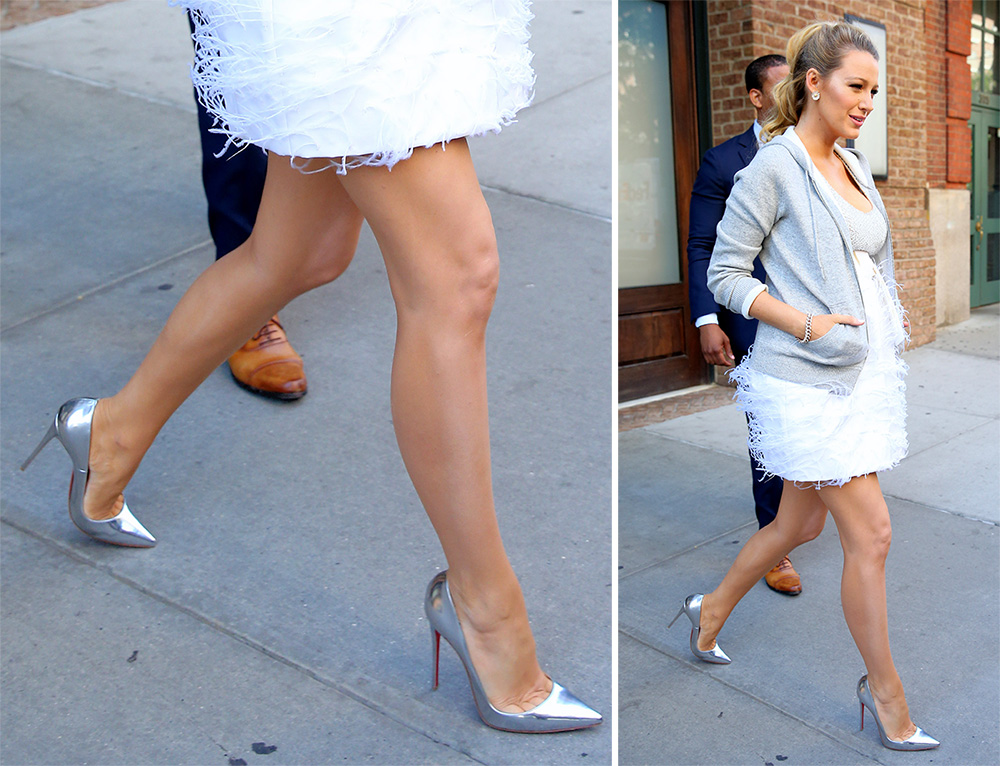 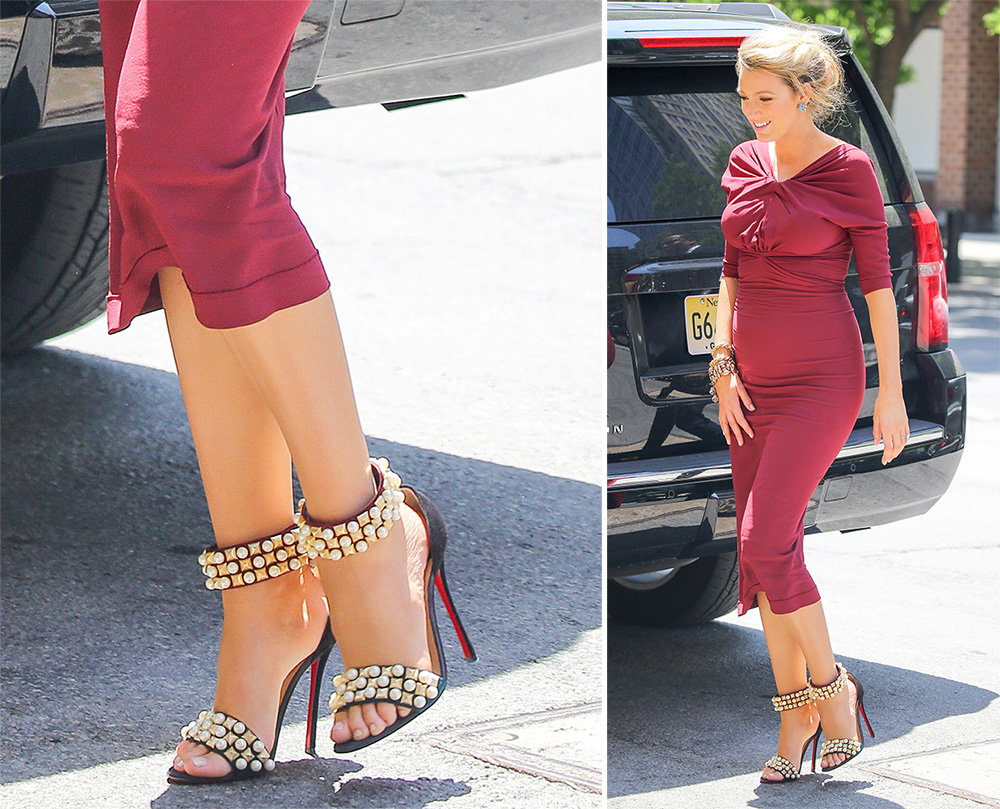 Wow, she is amazing. Those amazing shoes and dresses and all while she is pregnant. Impressive!

I’m guessing she gets these for free? Anyway, shoe game on lock. Well done!

Wow, she looks so amazing, incredible. I don’t know how she manages the high heels while being pregnant. Very impressive.

I am earning in the range of $6k-$8k /every month online. Those who are looking to do simple at home work for several h daily from your house and earn good payment in the same time… This is a work for you… http://self19.com

Wow, she looks so amazing, incredible. I don’t know how she manages the high heels while being pregnant. Very impressive.

I can’t rock heels that high, but she does so with aplomb.