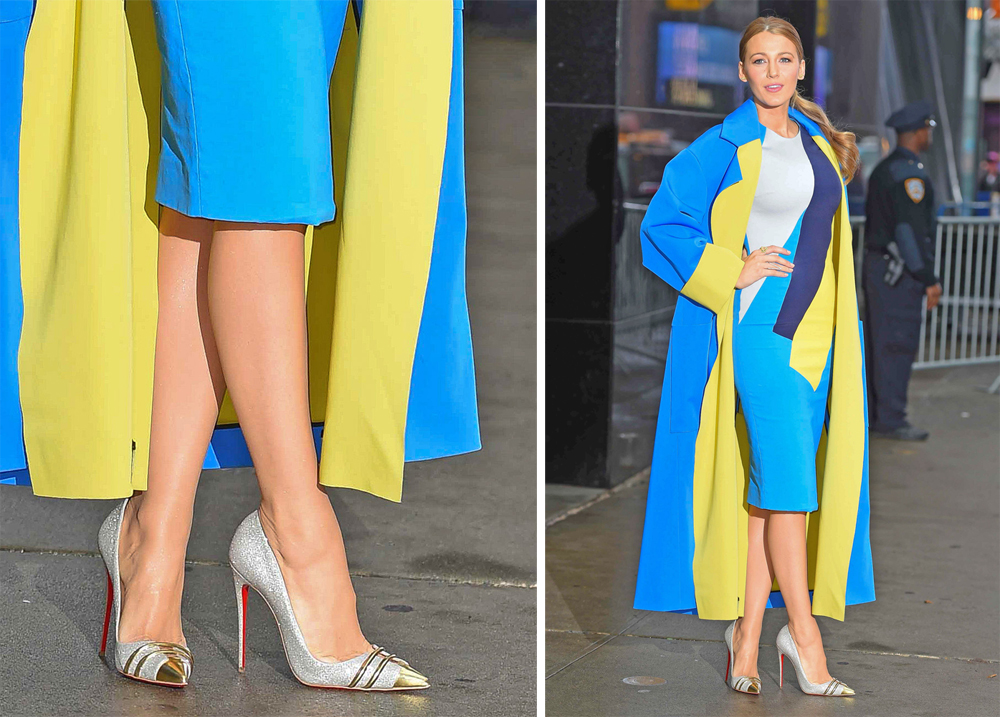 Let’s be real: Blake Lively is most likely an android created in a lab somewhere to a) school us on the privileged-yet-tormented lives of the Upper East Side elite, and a) shame us for being physically and fashionably basic in every conceivable way. How do I know for certain that she’s (allegedly) an android? Because the woman practically lives in Louboutins. In fact, we have very little proof that she leaves the house wearing anything else. The Loub love goes both ways; in fact, the brand named one of their shoes after her back in 2011. This explains why Blake occasionally seems to have exclusive access to new Louboutin styles, and also accounts for the unrivaled selection of Loubs in her closet.

Here she is using the streets of New York as her personal runway during NYFW. She paired these spiked Pigalles with a gorgeous, poppy-appliqued Michael Kors dress. If you love this dress, the brand still offers several non-appliqued, completely 2D poppy-print versions of it. You know, for normals. 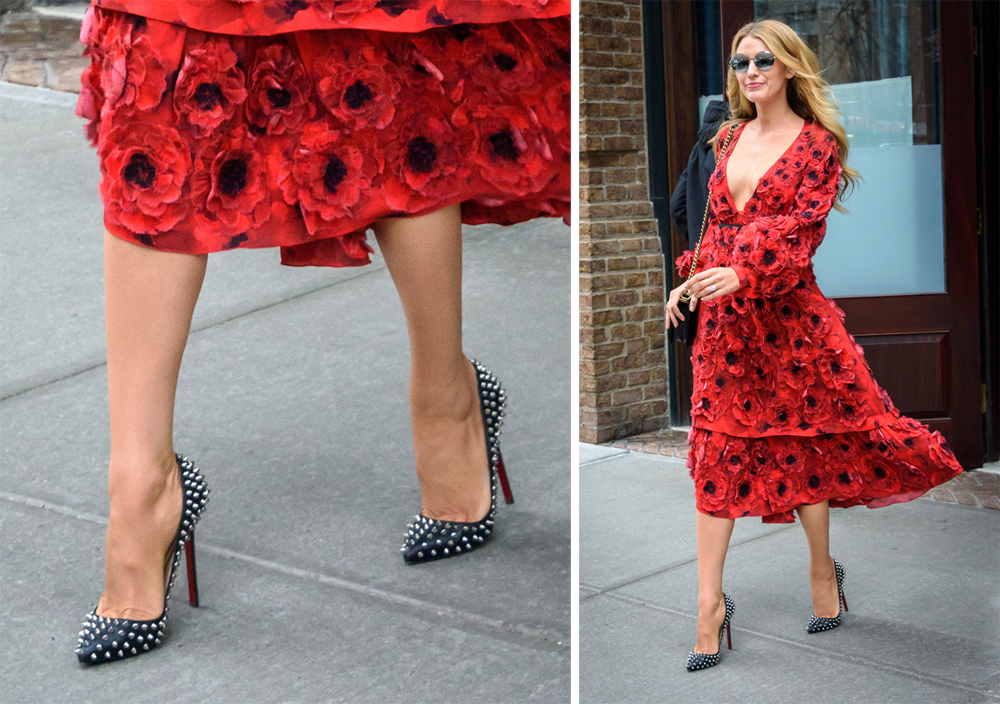 Blake wore these eye-catching, chunky crystal Pigalle Follies to the 2016 amfAR Gala in NYC, which she attended with her hubs Ryan Reynolds, of course. (Not pictured here. You KNOW what he looks like.) 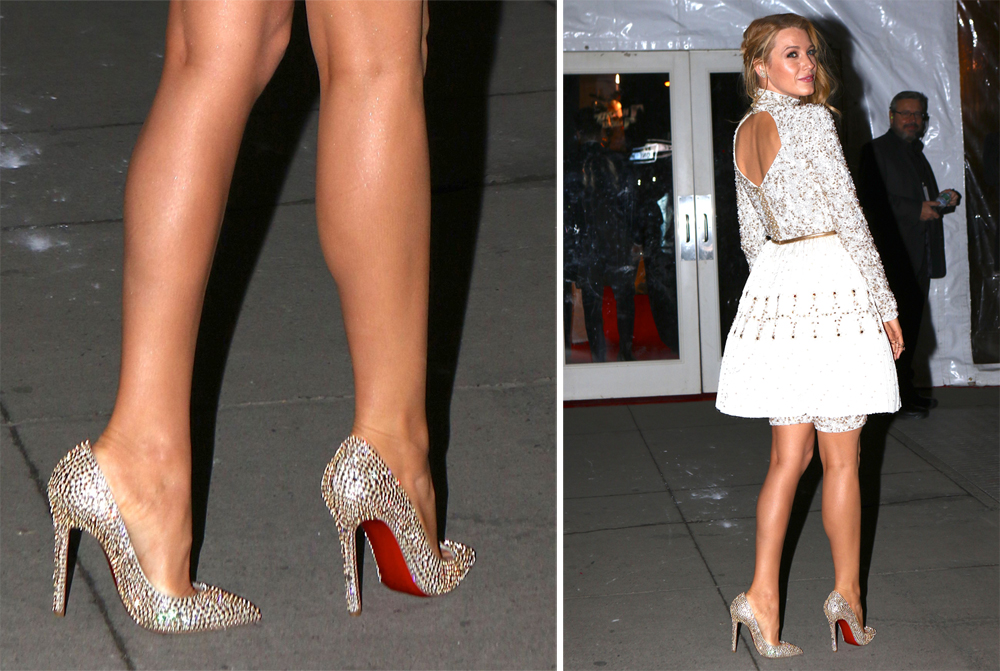 A few of these shots come from Blake Lively’s 2015 Age of Adaline press tour, which was a celebrity designer fashion blitz like no other. Here’s Blake, leaving an appearance on Good Morning America in a pair of shimmering, gold-toed Loubs paired with a dress and coat by Roksanda. This is a particularly bold fashion statement for pre-dawn.

Here’s a photo of Blake just living her everyday life in NYC while wearing a pair of pink python Biancas. The steep arch of this 5.5″ pump makes my head spin. 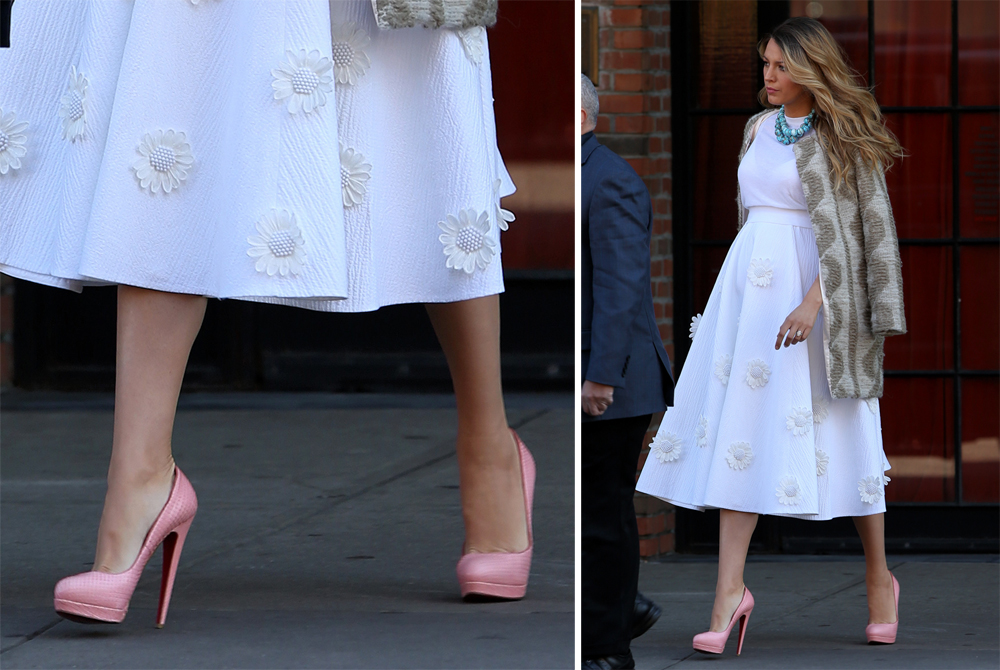 Black wore these suede Louboutin booties to a “fashion event” in Tribeca last February. Strangely enough, no one took the time to document what this event actually entailed, and no one other than our photo service seemed to even notice it happened. 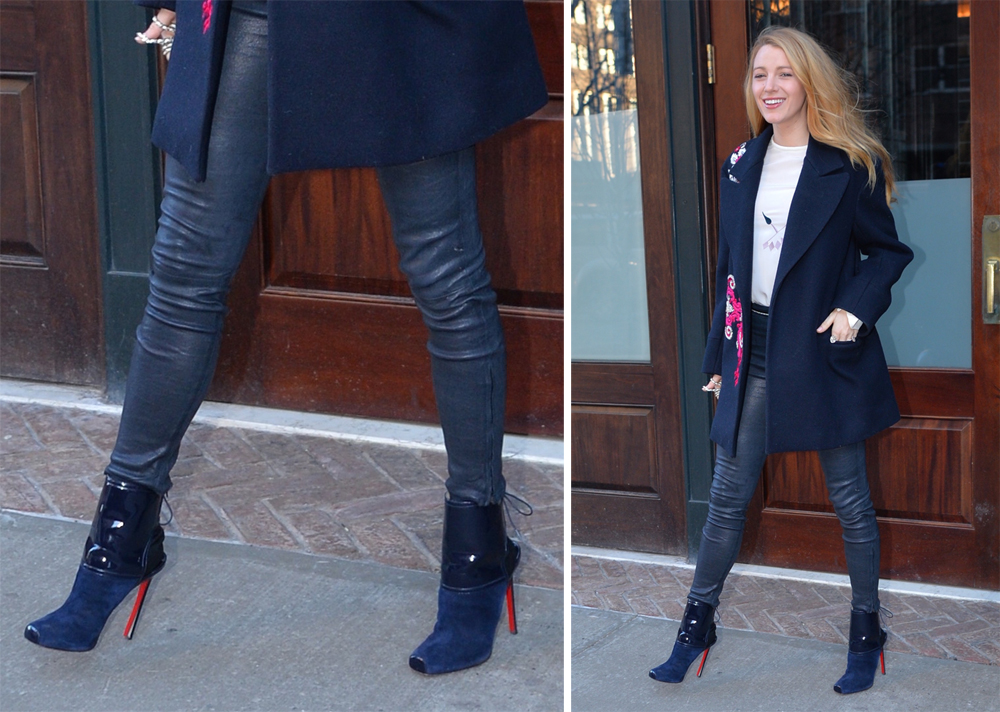 Here’s Blake leaving her NYC hotel in a different pair of caramel-colored python Loubs. Blake’s love of floppy hats is particularly well-documented, and unlike the other 95% of those who attempt to wear them, Blake can actually pull them off. 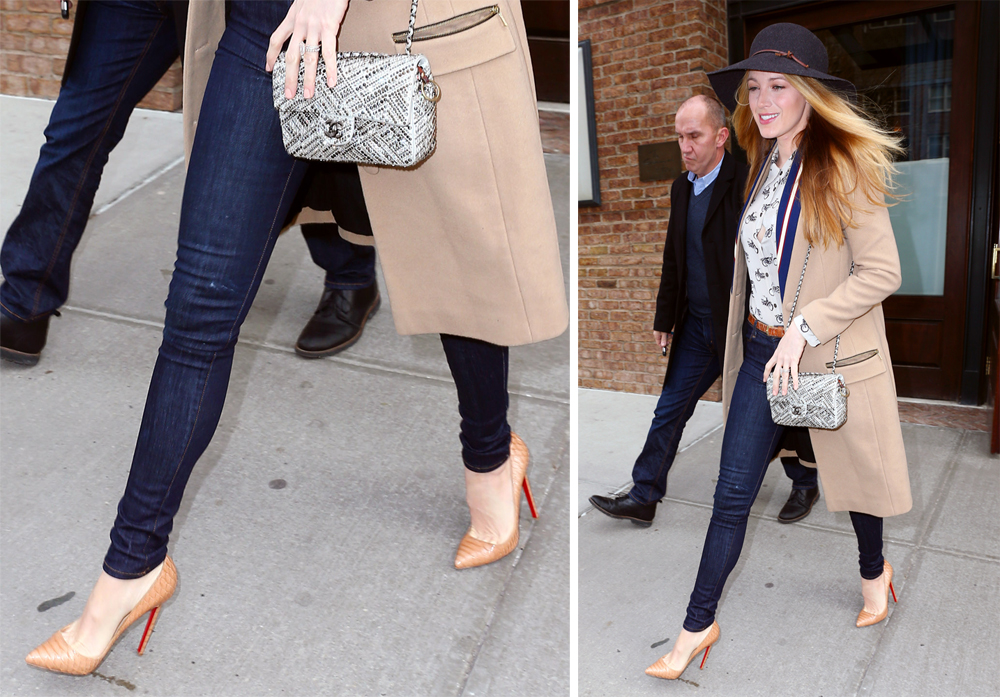 Remember that bananas press tour I mentioned earlier? This is what Blake wore to her actual Good Morning America appearance: a tartan Marc Jacobs dress and jacket paired with shimmering ombre silver So Kates. The statement-making blue-and-yellow ensemble featured above is what she wore when she left. She wore exactly ten different outfits to ten different promotional appearances that day. 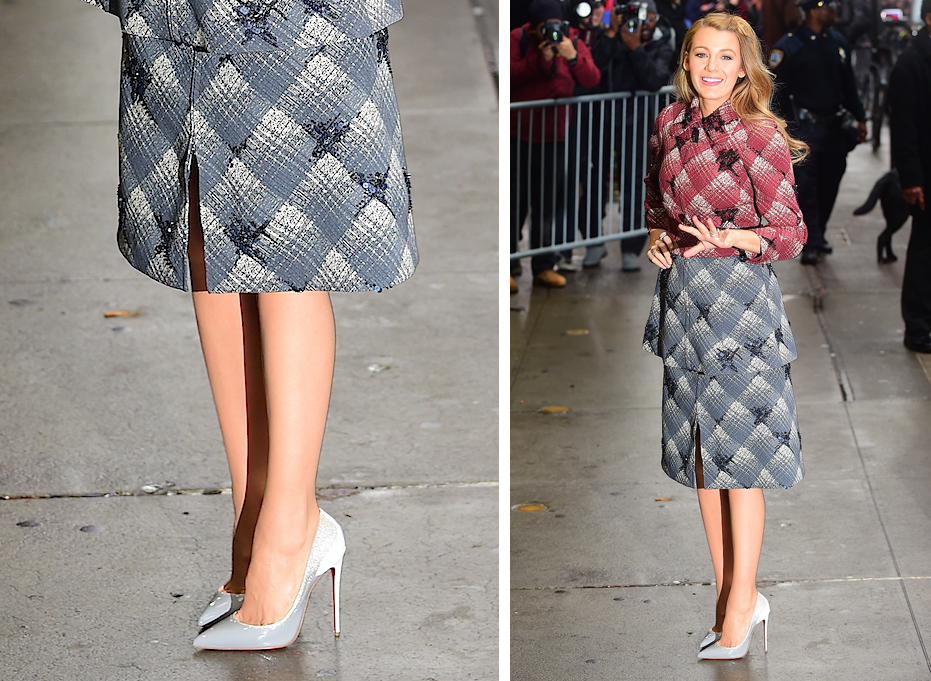 Finally, here’s Blake leaving her hotel en route to make an appearance on Fallon. This was the very last outfit she donned on that epic, whirlwind, one-day press tour. She’s wearing an off-the-shoulder Zuhair Murad dress, paired with beautiful laser-cut Louboutins. This is exactly the sort of “Princess Grace” look that Blake excels at. Just kidding, she excels at all looks, obviously. Because she’s an android. 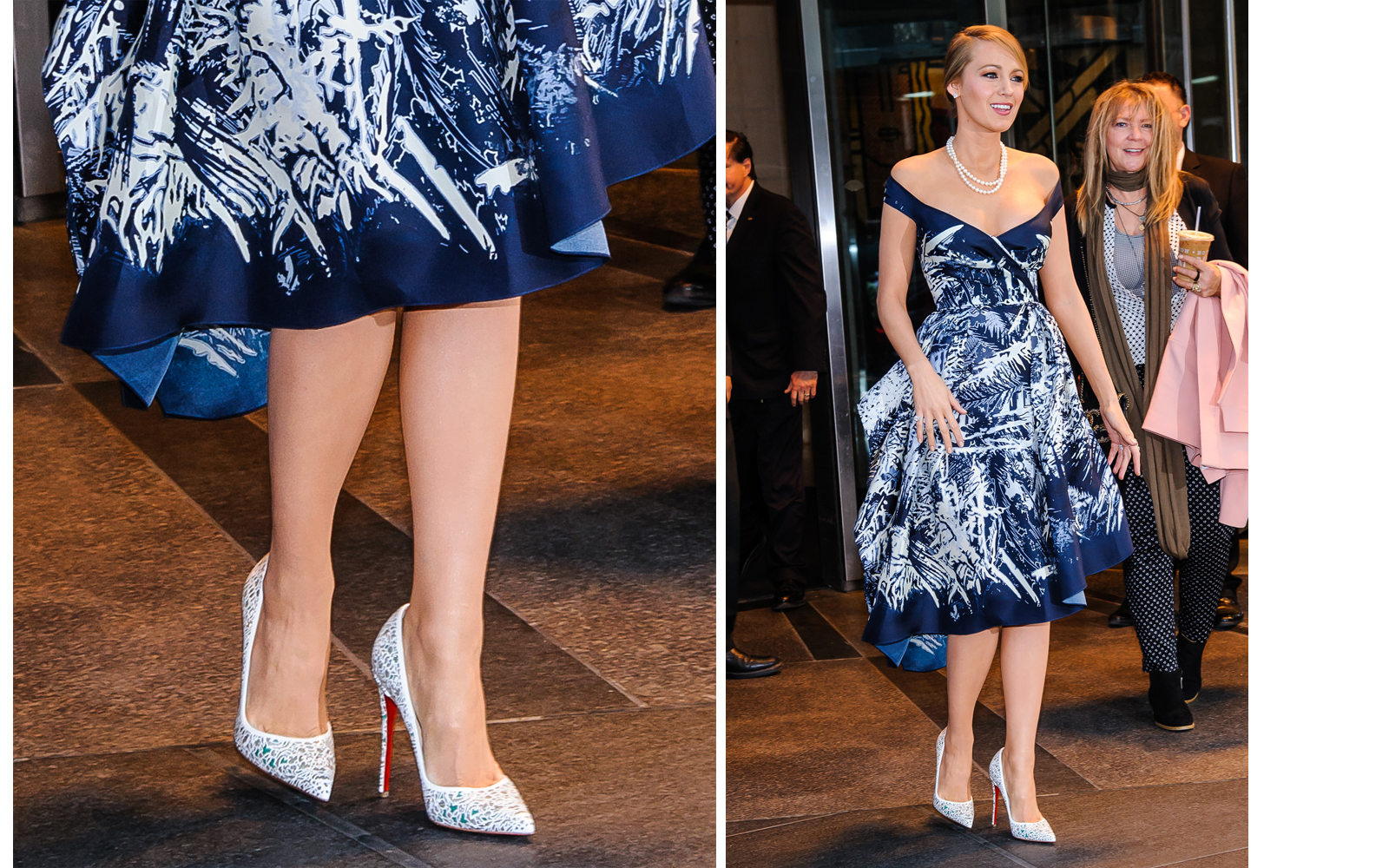 I love her so much!

i heard louboutins are really uncomfortable tho…. how are her feet alive?

I walk in louboutins almost every day and I almost only own 120mm heeled loubs. You have to commit then it becomes like any shoe you wear. A lot of friends I have only wear 100mm loubs cause they say 120mm hurts too much. But if you keep walkin in ’em it feels like any other shoe when you break ’em in. So walkin in 120mm loubs every day is like breaking in that height and being able to walk in any louboutin shoe ????

I have 13 pairs of Louboutin and the Pigalle 120s and Biancas are very comfy for me. I live in heels however and I’m used to 5-6″ stilettos.

Same! I enjoy it though that I’m use to it now, because I’ll own different loubs from my friends ’cause they stay away from all 120mm heeled loubs.

Probably, because Blake Lively’s shoes are custom-made for her, with a mold of her foot. Similar, to all of Dita Von Teese’s Louboutins.

I actually think she’s kinda basic and the Louboutin obsession confirms it.

She has a driver waiting for her and she does not have to walk far in them…because you are right, the particular styles shown here are difficult to walk in. I would mention that CL makes some amazing more walkable styles, the pointy toe flats are the best!

The top of the foot arches forward (especially noticeable in #3) so severely it distorts the leg silhouette. I don’t find this attractive or sexy. The platforms in #4 are particularly unattractive.

For an actress as beautiful as her, I find her fashion choice leaves plenty of room to hire a new stylist. i like her A Lot, but for half of the outfits here, I just can’t.

android, or plastic surgery? no problem with it but let’s be honest, her old nose and boobs were not quite as perfect

slide 4. What the heck is that outfit?

I love Blake but her latest round of plastic surgery makes her look old, haggard and wonky

I would kill to have her legs lol the heck with the shoes! Not a mark on those legs, not a vein showing. Spray tan I don’t know but their fabulous!

Yes, but actually I believe the photos are photoshopped by her press agency or something like that. Like for Natalia Vodianova who controls every picture taken of her.
Or it’s body-makeup. As far as I know, every human being needs blood circulating in their body. But WHY wanting to clear the veins out of your legs ?