Valentino teaches us the difference between its diffusion and main lines 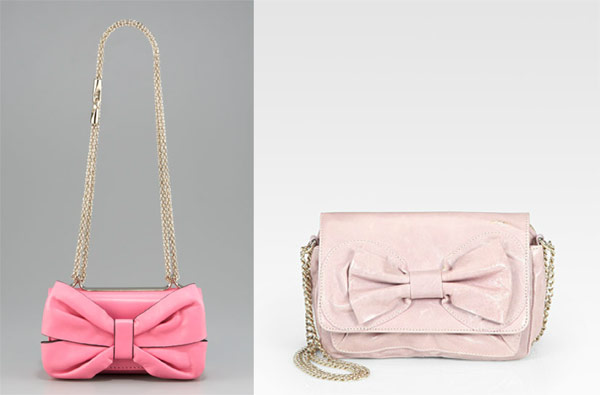 The similar aesthetics of the Valentino and RED Valentino handbag lines have always surprised me. Sure, a main line and its little sister should have some things in common, but sharing signatures – like Valentino’s bows, for example – always runs one of two risks. First, the less-expensive bags are too similar to the originals, which could mean that the “affordable” line cannibalizes some of the main line’s sales. Second, the comparison of the two might make the diffusion bags look incredibly cheap or childish, which could hurt sales and undermine the purpose of a diffusion line (to capitalize on the cache of the originals to provide an influx of easy cash.)

In the case of the Valentin Bow Flap Bag and the less expensive RED Valentino Leather Bow Shoulder Bag, we’re dealing with the latter issue. Sit them next to each other, and suddenly one has to wonder why anyone would pay $500 for the less expensive option.

Not that I would pay $1700 for the more expensive bag; they both look like they’re attempting to outkick their coverage (to use a football saying), if you ask me. Drop the regular Valentino bag to $1200 and the RED bag to $249, and we might have a conversation about it. As it is, they’re both a little steep, but particularly the diffusion bag. Some of the RED Valentino styles are beautiful and look much more expensive than they really are, but this is not one of those bags. Buy the Valentino for $1695 via Neiman Marcus or the RED Valentino for $495 via Saks.