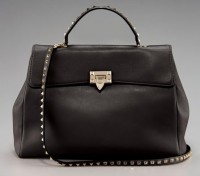 When Valentino first introduced us to its line of studded ladylike bags at the Spring 2011 shows back in September, I was…hesitant, to say the least. In the intervening months, I’ve remained hesitant, but the Valentino Rock Stud Top Handle has become the first of Valentino’s Spring 2011 bags to gain my approval.

The design belongs to a subgenre of bags diplomatically referred to as “Kelly alternatives,” and the limited studding around the trim calls to mind another Hermes classic – the Collier de Chien cuff. Of all the punk-traditional mashups that Valentino produced for the season, this one is the most subtle and the most successful. 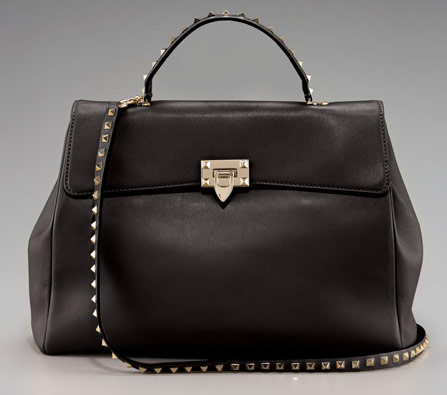 Part of my newfound appreciation for this design can be credited to seeing it in action on Gossip Girl; the sight of a bag being carried always helps to clarify things, and it looked sharp and extremely well-tailored on the arm of whoever had it. (Lily? Blair? I don’t remember.) I prefer this design over the others in the collection because not only are the studs subtle and very limited, but most of them are completely removable via the optional shoulder strap. Studs still feel like old news, but in this context, I would carry them today. Buy through Neiman Marcus for $1995.

This isn’t for me, but I like it. The studs make the classic doctor bag shape fresh and modern. Its the unexpected contrast that does it.

It can do without the gold studs. Ugh!!!!

I like it in black even though I don’t carry black handbags. The sand looks terrible and cheap.
The bag itself is okay, but I would probably be one of those women that attaches a scarf to it.

I think if it were round studs, instead of the pyramid ones, I would like this. The current shape gives off too much of a punk/rock vibe that is jarring against such an elegant shape.

—
Go on a makeup shopping spree by entering to win a $50 gift card for Apothica!
http://highmaintenancewoman.blogspot.com/2011/02/apothica-giveaway-dear-mizzj-just-what.html

I quite like Valentino’s studded items. They always retain just the right amount of romanticism, and they never go overboard with the studs. This is exactly the case here.

WOW I love it , simple chic and edgy , it will go with any outfit. Does it come in other colors? I can imagine it in a blue (like the blue mulberry bayswater) with gold studs . Yum 😉