The first time that I scrolled past the Prada Tessuto & Ricamo Tote, I was entirely sure that it was Valentino. Partly that’s because of the difficulty of photographing the details of a bag like this, but partly (or maybe mostly), it’s because it really LOOKS like some of the Valentino bags we’ve seen recently. Incredibly intricate, shiny, flower-themed…that’s kind of their thing. And it’s really not Prada‘s thing – their aesthetic is much more streamlined and modern, particularly in the bag department. 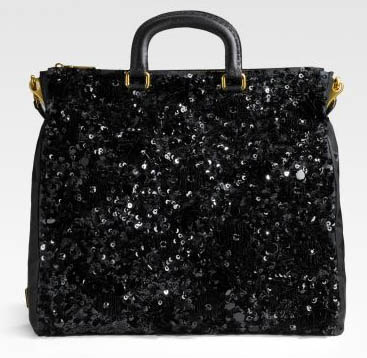 And the more I look at it, the clearer it becomes that Miuccia should have left this to her Italian compatriots. The sequins-and-nylon setup they’ve got going on here just isn’t working, not even a little. Valentino does a great job with this gimmick because there is order in the bags’ chaos; the Prada version just looks like someone dumped a bag of black sequins on it. Considering the price tag, I’d look elsewhere if you’re interested in a similar style. Buy through Saks for $3695.

Celebs Step Out with New Chloé and PradaPrada Offers Classics with a Sparkly Twist Just In Time for the HolidaysCelebs Hit the Streets with Bulgari, MCM and PradaCelebs Admire Modern Art/Party with Dior, Fendi and Prada in Miami
Amanda Mull