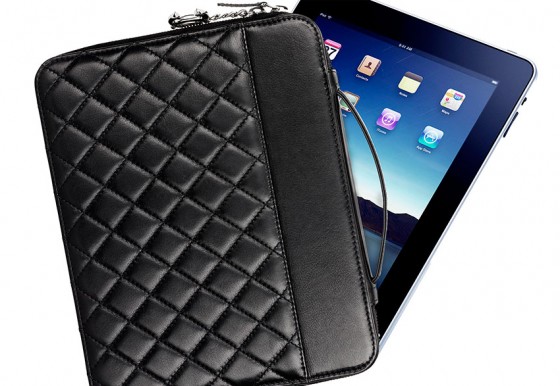 I am not going to try to fool anyone by pretending like I don’t love the iPad. Prior to its launch, I was vehemently opposed to purchasing one, despite having been a loyal Apple customer over the years. Once I got to play with it shortly after it came out, I was sold. I use it daily for browsing, email and an occasional game of Angry Birds.

I take good care of my gadgets, I keep my MacBook Pro sleeved during travels and care meticulously for the clean appearance of our miscellaneous displays around the house. But I have never encountered the urge to spend triple the amount that it costs me to purchase a gadget on a protective layer for the gadget.

Behold the Chanel iPad Case, formally known as the Chanel “Mallette en cuir noir” and weighing in at a staggering $1,555.

PurseBlog appreciates Chanel bags for their classic appearance and timeless touch. The leathers are undoubtedly amidst the finest attainable, the quilted stitching draws envious looks from many and the brand’s customers are a loyal bunch.

However, to spend $1,555 on a carrying case for a $500 tablet that will soon become obsolete by its smaller, faster, shinier successor borders on absurdity. There is no longevity to this purchase at all and I am positive that even the most hardcore of Chanelistas will agree with me.

Go with a $60 Dodo Case and support a domestic manufacturer instead.

Celebs Are Out and About with Gucci, Chanel and BalenciagaPurseonals: A 2011 Chanel Jumbo Classic Single Flap BagCelebs Step Out in Their Casual Best with Longchamp, Wandler and ChanelThe Chanel 2019 Price Increase Impacted Majority of Markets